Howdy scummers! Happy last Necromunday of 2022. This week we are taking a look at another one of Fowler’s Necro crews: the (to be named) Squat Arbites!

BRINGING JUSTICE TO THE UNDERHIVE IS A TALL ORDER

When I originally posted my first Manwolfs gang showcase, a few folks asked me about the Squat Arbite in the above picture. That gentleman was part of a big kitbashing project I took on a couple of years ago. My club’s usual arbitrator said that he wanted to pass the torch, I immediately felt the need to go out and get an Adeptus Arbites gang in case I needed to… keep the peace. Of course, all of the old Arbites models are extremely out of print – and out of scale with modern Necro (ooh… ironic!). Opportunity knocked when I came across some Mantic Forge Father models in a free box at my club (p.s. thanks Doug!), and I started to piece together an idea for a fun and unique way to work some lawbringers into a future campaign. You may notice a non-Squat in the crew. Originally I was going to run her alongside seven Squats and see how long it took for someone to get the joke. I’ll see myself out. 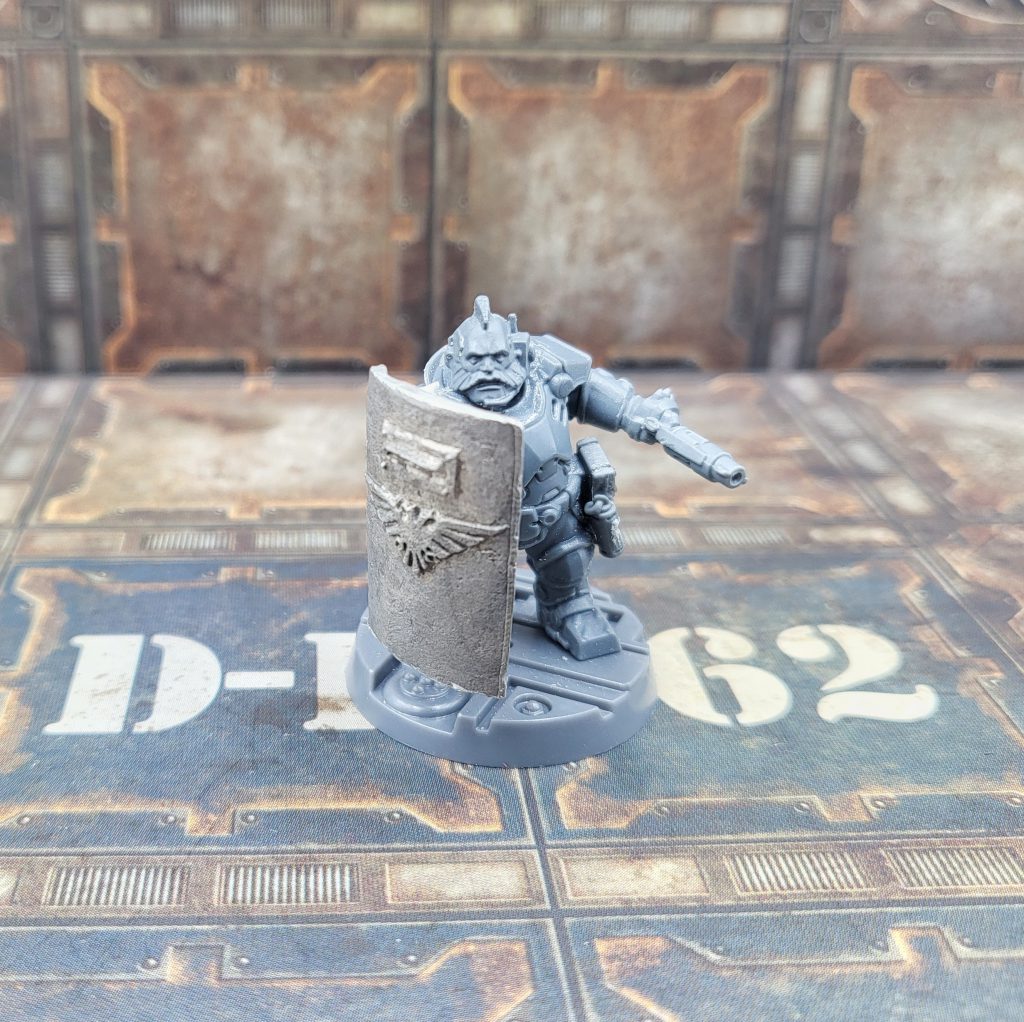 The main elements of my kitbashes are the aforementioned Mantic Forge Fathers bodies, Orlock gang stub guns, Skitarii Vanguard heads (or suitably squat-esque unhelmeted options – Space Wolf scout heads are great), some Arbites Shields from eBay, eagle shoulder pads from Anvil Industries, and GSC Neophyte power mauls. Many of the gangers’ arms and backs are magnetized. This was done largely because I started work on this gang before the Enforcers rules were released! As I finished up a second batch of Arbites, I was able to add more options that brought a few more rules-compliant options to the squad. There was a bit of debate about “modeling for advantage” with these dudes. The gameplay reality is that our boards are full of railings and other low cover scatter that essentially render these dudes useless a majority of the time. Anyhow – if this squad shows up on your doorstep it is likely that you have earned an unfair fight! 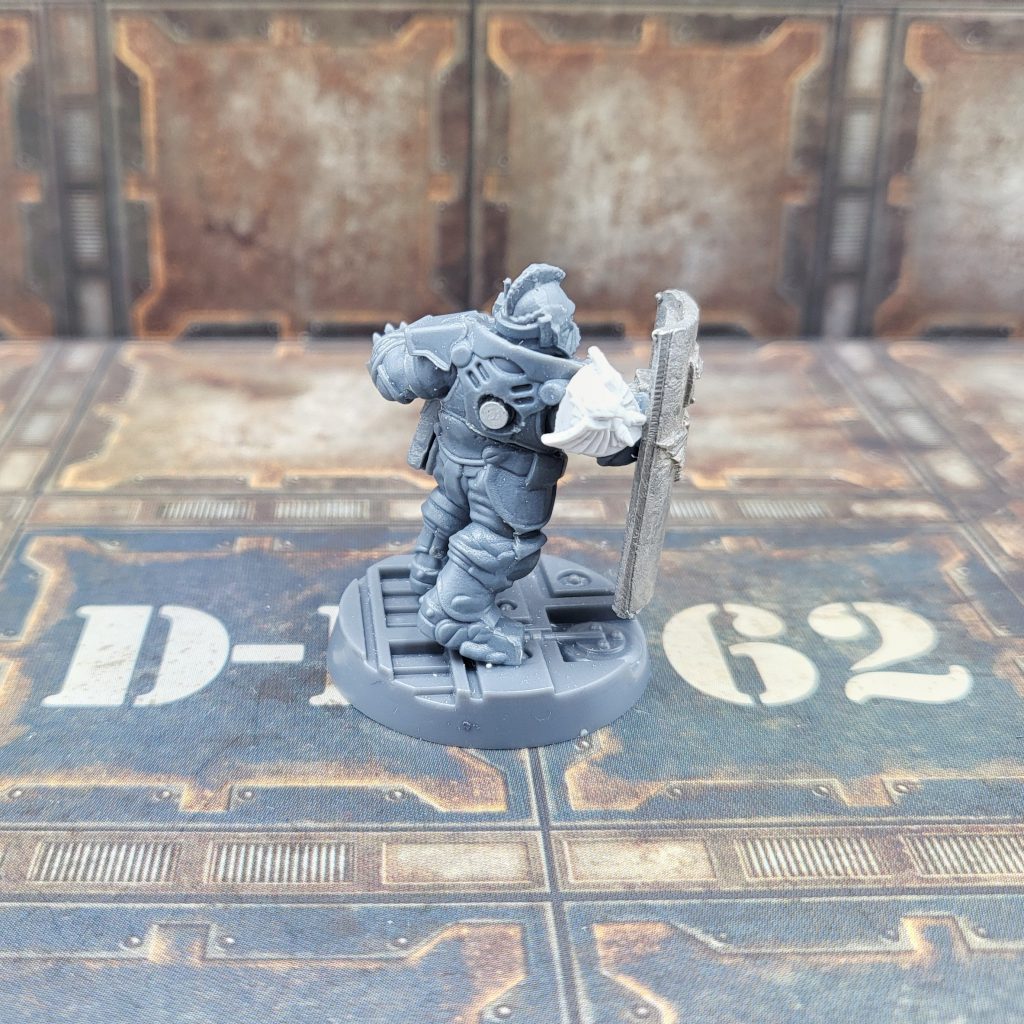 In terms of a paint scheme – these models were painted very early in my “getting serious about painting” journey and it is easy to execute. Basecoat flat black – in this case a priming with Krylon Ultra Matte Black is great (especially the camo line, usually less than $5 at an auto supply store). Basecoat Eshin Gray. Heavy Drybrush Dawnstone, Contrast black over everything. Armor gets chunky, messy highlights of leadbelcher and then some Nuln Oil all over to knock it down and darken the flat areas of the panels more. Red details are Mephiston Red. I didn’t write down the gold recipe, but at the time I was all about Retributor Armor, wash Reikland Fleshshade, drybrush Auric Armor Gold, Drybrush Liberator Gold, and bits of silver for high highlights.

Long before there was Ratling Slopper Bigby Crumb, there was Squat Slopper Orivik Stoneflagon. I believe he’s a Reaper dwarf brewer – with an extra brass etch Aquila to make him a bit more “Imperium-y”. With Stoneflagon, the soup of the day is always beer.

So what’s next? I have a second round of gangers to flesh out the ranks. Ideally I would love to have 2k points of “enforcers” plus a few spicy options like an Ambot and some Arbite-flavored brutes. I’ve also recently primed a couple of the other Artel W “LEU” line models to use in an upcoming campaign, and am very tempted to go all-in with those. I’m very excited to pick this project up again three years later – I may even touch up some of the older models and try to really raise the painting standard! Ironically, I’m going with a different gang to (potentially) keep the peace in an upcoming campaign. Once they get the big reveal with my players I will share that gang here!

And that’s a wrap on 2021! We’re looking forward to Nurgle taking a break so we can all get more Necro games in over the coming year. Got questions about rules interactions? Want to show us some rad pics of your models? Do you want to be the one guy who is compelled to email us and say that Squats can’t be in the Adeptus Arbites? Drop us a line at contact@goonhammer.com.