Welcome back, scummers! If you’re sick of your gangers losing life and limb to errant explosives and bouncing bombs, we’re here to help. Today we’re presenting Goohammer’s Guide to Grenades in Necromunda, with everything you need to know about blowing things up a few inches away – from tactics to hobby tips.

Grenades are something that every single gang has in common. Even if a gang doesn’t have access to a type of grenade through their house list, they’ll be able to purchase them or scavenge them during the course of the campaign. Grenades have a startling array of offensive and defensive capabilities, and navigating all of these choices can be tough for inexperienced Necromundans. The different types of grenades are also what makes the humble grenade launcher one of the most in-demand weapons in the Underhive.

So, in this article we’ll be talking about the point of buying grenades for your fighters, how to use them effectively, and running down the list of each type of grenade and talking about their capabilities. Let’s get into it.

Why Even Bother with Grenades?

There are tons of blurred lines within these categories, and no grenade, except maybe the Krak grenade, sits purely in any of these categories. Offensive grenades are the easiest to understand and use effectively. They’re for blowing up the enemy! Not only can they pack a big punch, but almost all of them involve some sort of blast template, meaning that they can target multiple members of the opposing gang, which is never a bad thing, just go and ask a Cawdor player if you don’t believe me.

Control grenades are all about disrupting the enemy gang’s processes. The most important element of control, of course, is Pinning. All grenades contain an element of control, because most of them will at least Pin enemies, but for some grenades, the disruption is the point of the attack (Gas, Photon Flash Flares, Stun, etc.). Control grenades can be just as dangerous as offensive grenades, just ask anyone who’s played an Escher gang with a crap-ton of Photon Flares!

Finally, we have defensive grenades. These are grenades designed to stop the enemy gang from doing what it does best, while not really having any offensive heft at all. Smoke grenades are the most obvious standout here, and they should be a topic that regular Necromunday readers are extremely used to. We’ve been singing praises for Smoke grenades for years!

Grenades are also an excellent way to play the action economy metagame. What do I mean by that? Ok, say Juve X has two actions to perform on their turn, one of which can be an attack. Their player has spent 40 credits and armed Juve X with Incendiary Charges. Juve X can throw one of their Incendiary Charges and hit, let’s say, 2 enemy fighters. They’re both pinned, and one of them has even caught on fire! So, with their one action, Juve X has neutralized a whopping three enemy actions next turn (1 for the pinned fighter standing up, and 2 for the fighter who has to spend their turn stopping, dropping, and rolling).

Generally, Juve X would be armed with some sort of crappy pistol, but since grenades sidestep weapon type limitations, Juve X can make a serious positive contribution to the game using their cleverly purchased Molotov cocktails.

The first thing to think about when equipping your fighters is, “who should get the grenades?” It can be a little bit counter-intuitive, but your big-time leader or champ with the tricked-out plasma gun probably don’t need to be packin’ Molotovs because their attacks are too valuable. Instead, give grenades to your fighters who either don’t have good ballistic skill (ie, Juves), or have a weapon that you don’t need to shoot every turn (ie, autogun or cheapo pistol). Juves and Prospects love grenades, Scummers! Don’t deprive them!

The second thing to think about is where to place the templates. For offensive and control grenades, you don’t have to pick an enemy fighter as a target. You can pick a spot on the floor between fighters if you want, or even a spot on the wall behind fighters. In these cases, it might be easier to target multiple fighters than aiming directly at an enemy fighter. And keep in mind that targeting multiple enemies is the whole point!

Finally, let’s talk about throwing grenades at targets that the thrower cannot see. Unlike projectile or beam weapons, in the real world, grenades are often lobbed over obstacles or around corners. In my campaigns, I like to add some rules representing that on the tabletop. Now, we’ve already had FAQ rulings about firing into Pitch Black areas, and we’ve talked about our little hotfix for using those rules. I’d like to expand upon this.

So, when targeting a location that the thrower cannot see, such as behind a barricade or around a corner, the grenade thrower can still make the attack, but the attack always scatters regardless of the hit roll and even if a “Hit” result is rolled on the scatter dice (there’s usually still an arrow present, even on the hit face). This is to represent the grenade missing its intended target and bouncing or rolling around. I’ve found that in games, it’s still extremely worth it to make grenade attacks in this manner! Especially with 5” Blast templates. If you think that this makes grenades too powerful, then do what we’ve done in the Lost Zone and make all grenades Limited!

A quick note, I do not apply this rule to Grenade Launchers. While they can still happily blast away into Pitch Black areas, I like to rule that their payload’s trajectory is too flat to do skillshots like grenade throwers can do. I find that this does a good job to balance out the relative strength of the two attack options.

Fowler here with a hobby tip! Templates are a big part of grenades in Necromunda, why not have fun with them? My clubmate Andy hipped me to the idea of using miniature hamster balls as smoke nade templates. Measure out the spot with a standard template, and put the half hamster ball on the spot. This is a flavorful and 3D way to represent a smoke cloud on the tabletop. Keep in mind that most hamster balls advertised as 5” are slightly larger or smaller than that. Don’t worry too much about the difference, though – you are only losing or gaining a few MM on each side!

Miniature hamster balls can be had for less than $10 at pet stores and on the internets. Remember that one hamster ball gives you two templates – one side has a lid that unscrews as well.

Rob: You can also paint them, either just making them opaque, or using washes and contrast paints. If you’re gonna go down that route, spray the ball with some matte varnish first so your paints have something to adhere to.

If domes aren’t your thing and you’ve been around long enough to accumulate a mass of templates, then you can create a pseudo-dome by cutting one template in half and gluing the cut sections onto a whole template, creating a semi-dome effect that still gives you an ideal fo the vertical radius of the blast.

Grenades by the Numbers

All right, let’s dive into the different types of grenades. We’ll split the grenades into their three categories, Offensive, Control, and Defensive, and then talk about their relative strength, cost, and which gangs can benefit the most from their use. This isn’t meant to be a ranked list of what are the best choices, but more of an exploration into what the grenades are good for.

Any of the weapons marked with a * can be used with a Grenade Launcher. Grenade launchers are fantastic weapons that functionally increase a grenade’s range up to 24”. They’re really good! Just about every gang can take them, and they’re perfect for a Specialist. Blast weapons don’t really need super-high Ballistic Skill to be useful, so feel free to chuck the ol’ G.L. on a Specialist.

Most Grenades range is Sx3”, though some are shorter, with Sx2”. Having a bunch of fighters with S4 means that your gang can throw grenades further, and this should be taken into account when outfitting your fighters! Goliaths and the larger members of the Corpse Grinder Cult pack a Strength of 4 meaning that grenades for them are 12” or 8” weapons as opposed to 9” or 6” weapons. 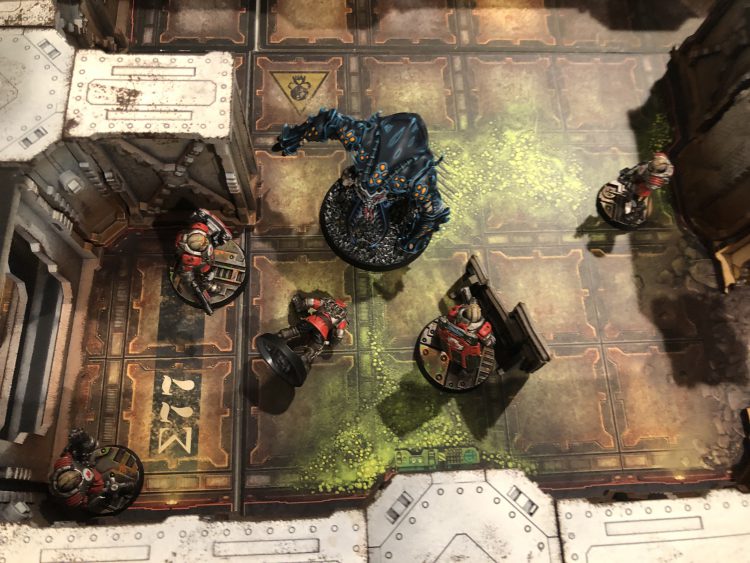 That wraps up our look at grenades and hopefully you now have everything you need to blow your opponents to kingdom come. As always, if you have any questions or feedback, feel free to drop us a note in the comments below or email us at contact@goonhammer.com.