Necromunday: Hear Me Out – Just Start a Campaign!

Howdy scummers! This week we are rambling about running your own Necromunda campaign. We were struck by how many readers told us that we are the reason that they have gotten into Necromunda! Consider this a gentle nudge for folks to take the next step. Don’t be afraid to step up and volunteer to run a campaign for your group!

You do not need to memorize all 900-odd pages of rules to arbitrate and run a Necromunda campaign. You don’t need a ton of GW terrain, or endless piles of perfectly-painted minis, or a secret hoard of Badzone Delta-7 tiles, or fancy Forgeworld brutes.

So how do you get started running a campaign? Dan’s article from a couple of years ago is a great way to kick off your journey. The majority of the time, the hardest jobs you are going have are remembering how Blaze works and putting terrain away after folks are done playing.

What kind of arbitrator are you going to be?

In my current campaign, my plan is to be more of a GM than a playing arbitrator. I’ve got a gang ready, but I’m angling to have matchups against me work more like Convergence games in Warcry – narrative fights that offer something unique. This also gives me more time to answer questions and work on campaign organization. Not everyone will want (or need) to focus on being a coordinator first and player second, but it’s a great option!

Another thing that’s worth hashing out is how rulings work – are your players expecting a simple answer to a question or legal precedent for the future? I personally like erring on the side of fun and keeping a game moving, versus grinding to a halt. Just one week in and I’ve already permitted multiple (largely unsuccessful) creative and hilarious things that fly slightly out of the rules. That said, if you are making rulings it is imperative that you keep it somewhere that is easily accessible to folks… more on that later!

Is everybody on the same page?

I might be biased, but I am excited to be running a Lost Zone campaign. The dozen folks we have are all interested in a narrative experience, and LZ offers a nice framework to keep the power curve a little less pointy. There have also been some house rules (banning of feelbad cards, master crafted weapons, etc) chosen specifically to dodge some of the outlier abilities and items. Hell, for week one I had a special rule that no one could roll a critical / insta-death lasting injury – especially as there are so many brand new players. Don’t be afraid of experimenting with nudging lasting injuries or handing out resurrection packages if you feel like your players will have more fun. Keeping things less… lethal the first couple of weeks isn’t a terrible idea!

On the flip side – if your group is itching for something spicier, don’t hesitate to give them an arms race! Don’t be afraid to make some minor (or major) adjustments to facilitate the fun. Just keep in mind that it is much easier to make a rule change before the campaign than during it.

Keeping track of it all!

So you have a crew, a campaign variant, and a set of house rules sussed out – how do you keep it all organized? I highly recommend using a few tools: a campaign “packet” document, a spreadsheet with gangs and pertinent things like rep, and an asynchronous communication method like Discord or Slack. Yaktribe is the best way for individual gangs to manage fighters, gear, weapons (and potentially more, depending on the campaign type).

The packet should outline when the campaign is, baseline rules, how you determine your league champ or champs, and have links to any other relevant gang tracking. A Google doc would be more than sufficient for this! For the Lost Zone, Yaktribe won’t really cut it for campaign metric tracking. Both Dan and I use a Google sheet to track gang rep, OOAs, and organize the limited Trading Post / Black Market. For GW campaign types, you could just roll up a group in Yaktribe and manage it all there! Keeping information flowing and discussion clear is key! I like having an arbitrator-only announcement Discord channel in addition to a general Necro chatter one. If you are running Lost Zone or want to have more between game dice rolling (for income, ratity, etc) happen in public, a dicebot or trading post-focused channel makes a lot of sense. I’ve also started a Substack blog for doing campaign lore drops!

So what do we play on?

Having enough tables for an entire multi-person campaign is a daunting prospect. If you are playing at a game club, see what you might be able to repurpose from 40k terrain. Food for thought: you can make a righteous Necro a table from a tournament-ready 40k setup; squished into a 3×3 or 4×4, with some walkways and scatter.

The table you see above is made up of random MDF stairs & walkways someone left at my game club, some children’s construction toy set, five bucks worth of aquarium undergravel filter boards, and scatter. Maybe it’s not the prettiest table, but it played host to absurdity that I will never forget. A dude fell off a gantry (taking a max strength fall! hit); landed on and killed one of his teammates… but managed to walk away like nothing happened. Pure Necro dirtbag magic. 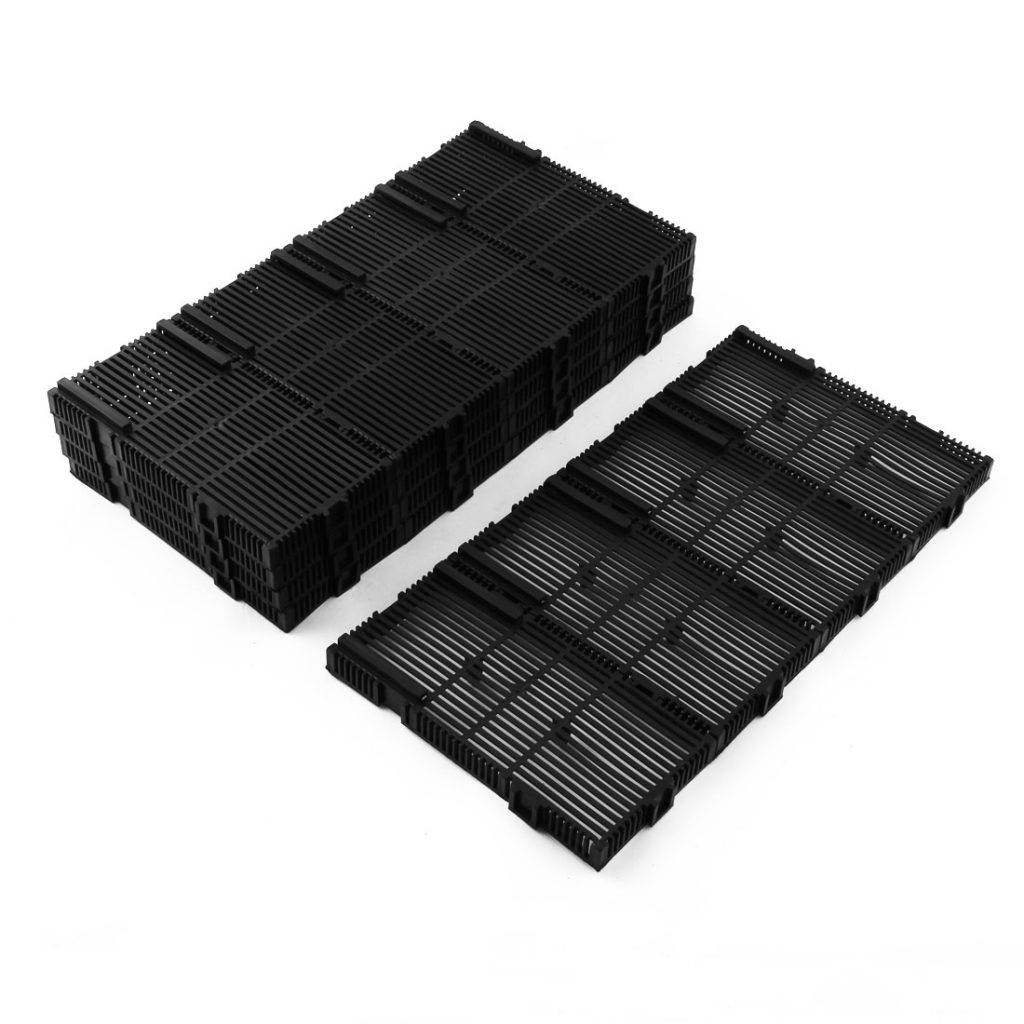 If you are lacking in the Necromunda-specific terrain department, go out and buy a couple of bags of undergravel aquarium filter boards. There are multiple types – the ones above are instant gantries! Others function more like large platforms. Keep in mind that most of these are PVC and some paint will not want to stick to them. I’ve had success with using the “Bonds to Plastic” Rustoleum primers! Creating traversible paths with walkways makes just about any terrain setup feel like instrant Necro.

On the absolutely lowest end of the price spectrum, building your own box fort or using papercraft terrain like Battlesystems / Infinity can give you just as much playability as any pre-made plastic. Eric’s Hobby Workshop has a wonderful video detailing his process for creating a hab block – something we’d like to see on more Necro tables! It really doesn’t matter how fancy any of this is, as long as it’s fun to fall off of.

Don’t forget about 2D boards! Not only do they (theoretically) require less terrain, you can potentially fit more concurrent games into a smaller space. While the OG Necro tiles are hard to find, I highly encourage you to find a way to play “true” Zone Mortalis games on flat boards. The table above was made my my clubmate. It’s a mix of old Necro bulkheads, some casting, lots of printed material… and it folds up into a carrying case with a handle!

I cannot describe the feeling of watching five concurrent Necro games in your campaign. It rules. There are complicated aspects of this game, but you don’t generally need to face them all at once. Plan ahead, get folks on the same page, stay organized, and find something cool to fall off of. Especially if you have other intrepid players who can be patient while you work the kinks… be bold and give it a shot!

And that’s it! Thanks for coming to our TED talk. We hope that’s it’s been coherent enough to encourage you to get out there and ARBITRATE. Got harder questions about running a campaign? Any suggestions for low cost (especially papercraft) terrain suppliers that we should shout out? Anyone feel strongly about what strength and damage stats a thrown chair should have? Drop us a line at Necromunday@Goohnammer.com.