Welcome back, Scummers! If you’ve been following along at home, you’ll know that the other week we brought you some general tactics for fielding and dealing with Genestealer Cultists in the Underhive. Maybe you’re not completely on-board with the local Patriarch’s rhetoric, but his tax-cut proposal is intriguing and dammit, he raises some interesting points.

If you’ve been looking to test the waters and cut a deal with the totally human Cult of the Second Son, you’re in luck! The Book of Ruin brought us rules for spicing up your boring ol’ house gangs with some extra abilities and/or appendages, so join us this week as we show off the secret handshakes and talk Genestealer Corruption!

So you’ve decided to sign up! The informational material given to you at all those secret meetings said “Four Arms Good, Two Arms Bad”, and dang it, they’ve been right all along. So start painting everything you own purple and hit the closest recruitment center!

There are two ways to become a Genestealer-Corrupted house gang (Note: only house gangs can become corrupted in any manner. Sorry Enforcers, Corpse Grinders, and Venators. You’ll get ‘em next time): at gang creation and mid-campaign. Choosing to be a Genestealer-Corrupted gang at start is simple! You just make that choice, and then you’re eligible to buy all the cool stuff! However, the gang automatically starts the campaign as an Outlaw.

Becoming infected mid-campaign is a little more involved. Asking after any local cults will automatically Outlaw the gang if they’re not already Outlawed. In the post-game sequence, the gang’s leader can take an Intelligence check to attempt to find a local cult. If they pass, then the gang is infected! If they fail, they can try again next game.

And, in an extremely cool narrative twist, if there is a Genestealer Cult gang already in the campaign, the prospective infectee can petition them for membership, which the player who is controlling the Cult gang can grant! No Intelligence check is necessary, and the gang automatically becomes Genestealer-Corrupted.

The Perks of Membership

Aside from this nifty decoder ring, nothing’s free when you’re looking to take advantage of any of the buffs and boons available to a newly-corrupted house gang. Spend your credits wisely, but be prepared to splurge on some truly neat tricks and enhancements!

Or, for those flush with credits, one of everything. (Insta: @kid_dangerous117)

Upgrading to a Psyker Leader

When you upgrade your leader to a Non-sanctioned Psyker, they gain the ability to learn Genestealer Cult Wyrd powers in place of picking primary skills, same as a Cult Adept in a regular GSC gang. Like everything else for corrupted gangs, the upgrade isn’t free, requiring a 40 credit payment due in the post-battle phase. (So no psykers when you’re creating your gang, sorry! You’ll want to keep those credits earmarked for this one, though. Psyker leaders are nuts).

Right off the bat, as soon as you unlock your leader’s psychic potential they automatically learn a single Wyrd power of your choice, essentially gaining them the XP-cost equivalent of a free skill for a mere 40 credits. If you’re unfamiliar with your options we’ll hide ‘em right here, but your picks here should be influenced by the rest of your gang’s modus operandi. Failing that, Mind Control is always good times!

Hypnosis: Short range, but the ability to steal an enemy fighter’s turn is very powerful. Target leaders, champs, and brutes and your leader will pay dividends in no time!

Unbreakable Will: With this power, your leader can sub in their stats for Willpower and Nerve checks for friendlies, which is something that you’ll almost certainly never do.

Zealot: This power is a combat buff that allows hit rolls of 1 to be re-rolled. Not too shabby if you’re going full beatstick.

Mind Control: This one’s the best one. A successful cast will cause one of the enemy fighters to perform a Shoot (basic) action against their own gang! Maybe not as effective against Corpse Grinders, but still extremely effective!

Assail: Could be cool, but this power requires a ranged to-hit roll instead of just working, so it will fail half of the time. There are better alien space wizard powers.

Force Blast: This power is the “Oh Shit” button of Wyrd Powers. It will push enemy fighters away from your leader, but it doesn’t automatically pin or damage them. Potential utility exists if your leader already has Zealot and needs an out when threatened, but on its own, this one kinda blows (get it?!).

Your newly-Wyrd boss is going to need an assistant, and for the low low price of 25 credits, their new Psychic Familiar is all too happy to oblige. This Exotic Beast’s Omen of Fortune ability will let your leader dodge multiple hits per round, provided they can pass a Willpower check. (Sorry, Goliaths, this one ain’t your forte.) The Familiar tends to be a defensive crutch in a full Genestealer Cult, as Cult Adepts are hardly known for their combat prowess. In a GSC-Corrupted gang, you’ll have the might of your regular leader, only now he’s also slinging around mind-bullets while slashing apart the enemy, all the while guarded from harm by his new gribbly friend.

Does that sound like fun? Damn straight it does. Psyker Leaders are amazing, and  you absolutely should make the upgrade as soon as you can. 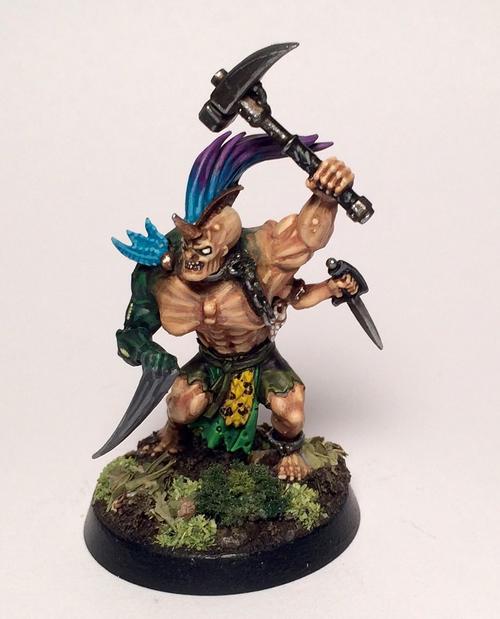 A GSC-Corrupted gang’s Aberrant is equal parts wrecking ball and bullet sponge, and guaranteed to be enemy number one for any opponent unfortunate enough to face it.

You’ll only be allowed to hire a single Aberrant (consider this your trial membership period) for your gang, but often times that’s going to be plenty.

An Aberrant has roughly the same cost and stat-line as a normal house champion, but with Strength 5 and a 3+ Weapon Skill to rend though anything you point it towards.

Kit yours out with any melee weapons and armor that you fancy, though they’re barred from even thinking about guns or any non-armor wargear.

There’s not quite as much to say about the Cult Icon, which can given to a single champion or leader to allow them to rouse one additional fighter during a group activation. Massing group activations can be a powerful way to provide bursts of momentum before the enemy has an opportunity to react, but you’ll risk blowing through your ready markers and wind up flat-footed when the survivors activate and dance around you.

The one house gang that typically fields enough bodies to make Cult Icons almost an auto-include are Cawdor, and they already have one available in their House Armory. For anyone else, it’s a 40 credit item that entirely depends on your particular play-style.

The schism was violent. The devotion was unaffected. (Insta: @wrongwaygoback)

Hybrid Juves represent the first generation of a budding cult and can be hired in place of a regular juve with the same stat line as a regular juve from your house. For 30 credits extra, they come equipped with an Extra Arm identical to the ones used by early generation hybrids in a full Genestealer Cult. While it’s a bit disappointing that the only instance of triple-armery available to GSC-Corrupted gangs (aside from the Aberrant) is limited to their Juves, the sheer utility granted by the bonus appendage is hard to pass up!

With an Extra Arm, a fighter carrying an Unwieldy weapon can fire it as a Basic action instead of a Double, same as if they were equipped with a suspensor (at a bargain price of half-off, no less.) if they’re carrying reasonably-sized weapons instead, the arm grants the bearer an extra attack in melee, which will also strike as if it had the Rending trait. 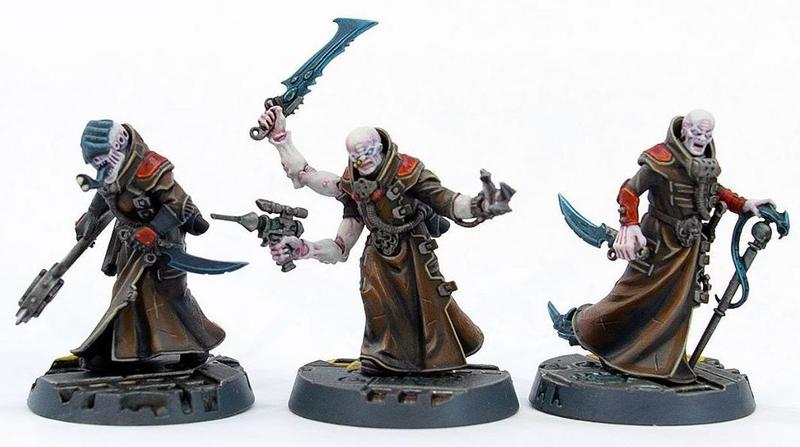 These Delaque weren’t trying to be subtle, and were somewhat disappointed when nobody even noticed. (Insta: @wrongwaygoback)

On Neophytes and Acolytes in a full cult, both of these abilities can be phenomenal, but when locked into only juves the arm becomes considerably more situational. Your juve will still be gated behind the typical equipment restrictions, so any potential Unwieldy weapons and most melee implements will be out of reach until they accrue enough XP for their first advancement (which probably should go into Weapon Skill, considering the abysmal combat ability of the average juve). We can’t in good conscience fully advocate ever paying full price for the unwieldy Heavy Flamer, but this does seem like the perfect time to use it if you happen to have one laying around for some reason.

From a narrative perspective, Hybrid Juves are a neat way to represent a human gang’s recruits being infiltrated by less-than-human augments as their corruption increases. Game-wise, they’re a bit of an investment, capable of pulling off some neat tricks once they’ve gotten a couple advancements under their belt.

It’s not an upgrade that you’re going to want to pay for every time, but do remember that Territories and Rackets and such that generate a juve for your gang allow them to come pre-hybridized for free. At that price, you can’t go wrong!

Who Should Join Up?

The best answer to this question is simple: anyone! Becoming corrupted is fun and cool! If you’ve played a few campaigns with your gang and you want a slightly different flavor, then Genestealer Corruption is a great way to put a little spin on your old minis and have some fun in new and heretical ways.

There could also be a cool narrative reason to become corrupted. Maybe your leader got captured by a Genestealer Cult gang, and the terms of their release included infection… The possibilities are limitless! 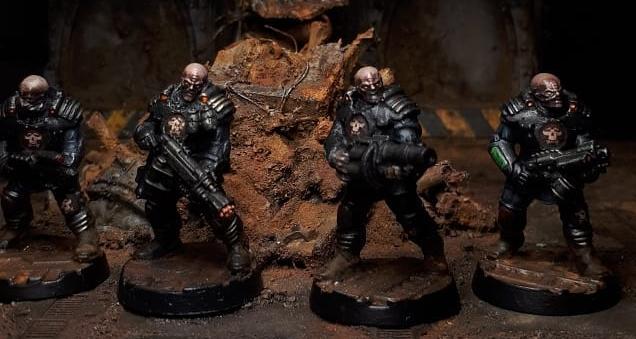 Honestly, if anyone in our group wanted to Corrupt some Enforcers, we’d let ’em do it. (Insta: @hobby.dad)

Each gang in Necromunda comes with their own inherent Strengths and weaknesses, and getting corrupted by this insidious xenos influence can help mitigate some of those weaknesses, or enhance some of those strengths. Let’s take a look at some examples!

It was a natural transition. Hell, they were already in the same Miner’s Local. (Insta: @n13e86)

When the Book of Ruin dropped, we were expecting to see updated rules for stand-alone Chaos and Genestealer Cult gangs, but House Corruption was a complete and extremely welcome surprise. Folks have been slipping Xenos bits and subtle nods to the Cult into their model conversions forever, and it’s been great to have that officially recognized and supported with actual rules that serve that function in Necromunda.

Part of us wishes they’d pushed it a bit further, but even with what we’ve been given there’s potential to both kitbash up some awesome alien dudes and dudettes and run a house gang that’s just far enough removed from the standard Delaque/Van Saar/Cawdor experience that it’s like playing as an entirely new variant of the gang. If you’re looking to mix things up, definitely give Genestealer Corruption a shot!

If you’ve got any thoughts on GSC-Corrupted gangs, or just want to show off some kickin’ rad conversions from your own gang, feel free to drop a comment for us below or email us at contact@goonhammer.com. We’d love to see them! As always, check back next Monday as we consolidate our own sprawling collection of house rules into something vaguely coherent and come to grips with the most terrifying phrase known to any Necromunda player: Rules As Written.