It’s Monday, Scummers! Everywhere else, Mondays are complete garbage. But here at Goonhammer, Mondays mean Necromunday! This week, I’m welcoming our newest contributor to Necromunday, Kevin Fowler! And to prove he’s got what it takes, I went ahead and asked him a few questions about his latest project, House Orlock’s very own Manwolfs. 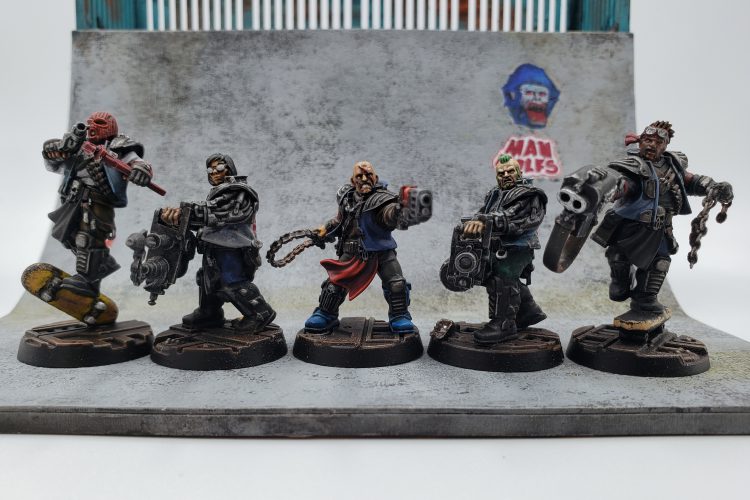 None of you were ready for this amount of radness today.

Hi, Kevin. Introduce yourself to our readers!

Hello Underhive weirdos! My name is Kevin, but since we have three of those already I’m usually known as Fowler, and I will be joining the Necromunday crew to help you get even better at falling off of gantries while you are on fire. I got into GW games in 2017 with the release of Shadow War Armageddon, and then successfully made the jump over to Necromunda when the new version came out later that year. I might be the only person to be lured in by Shadow War Armageddon! See more of my stuff at my instagram: SuperUltraMamboTangoFoxtrot

Why’d you start this project?

A few months ago I rewatched the movie Machotaildrop. There’s a scene with a big diorama of miniatures in a skate park, and it got me thinking about recreating that in Necromunda. I’ve played in two campaigns with a Nurgle Chaos cult gang, but I got the urge to try out a House gang for a change. The Manwolfs are a feral gang of skateboarders that show up and generally wreck shop in Machotaildrop, along with various shoe commercials and music videos. House Orlock already has cool vests and bike chain flails, so it was a perfect match! 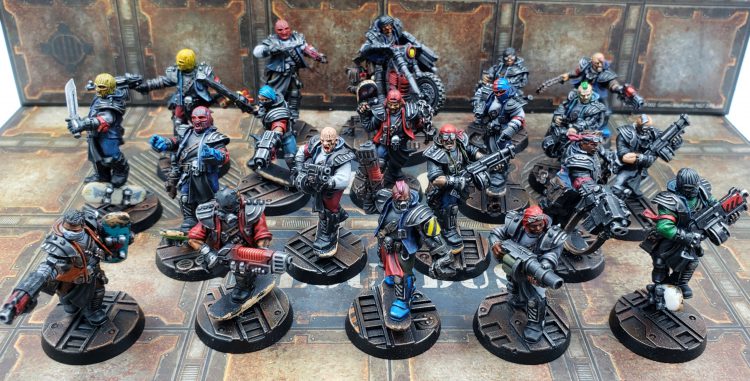 The Manwolfs assemble for ruckus.

How’d you go about doing this project?

When I first got the idea to do a skateboarding Necromunda gang, I assumed that there would be some easy bits to pick up… but I couldn’t find anything the right size. Without boards to buy, I whittled my own out of small craft sticks. The trucks and wheels are made of brass rod and 11/0 glass beads. For the kickflip poses, I carved out a bit of a gap in the base and pinned it for stability. The skimask heads and some assorted other goodies are from Anvil Industries. My “lugger” cargo servitor is kitbashed from a Genestealer Cult Atalan Jackal Bike and a legion heavy bolter. 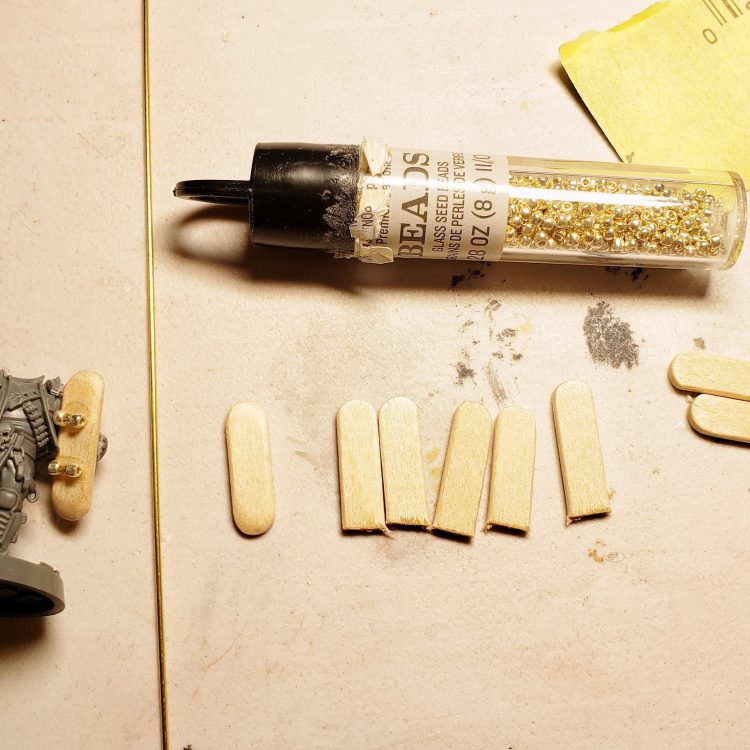 The basecoats are all GW contrast & Vallejo Metal Color paints over a heavy zenithal. Everything got a coat of gloss varnish and Testors black enamel stain, making sure to keep the majority of the grime in the recesses and panel lines. Boards and vests got their transfers, and some highlights got added here and there. 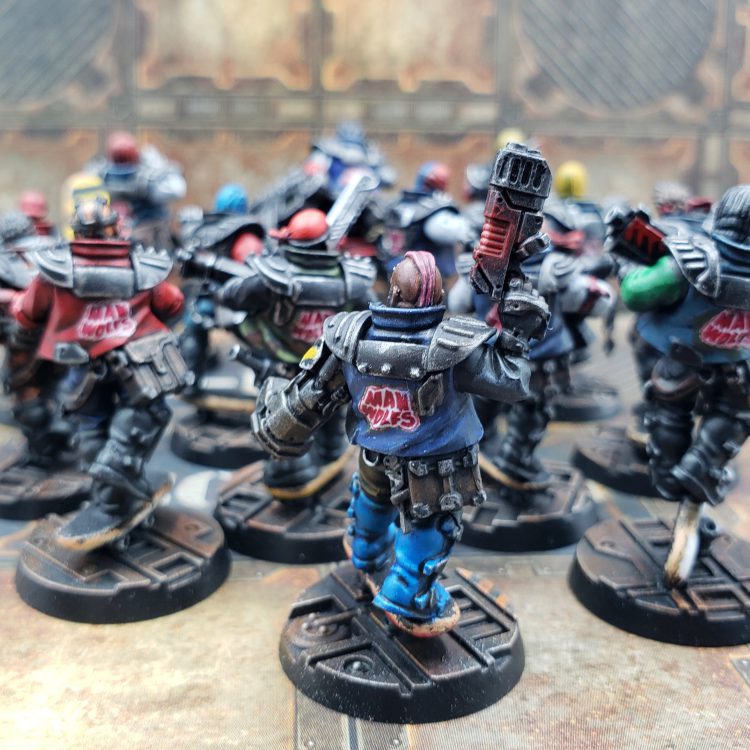 Kevin made his own Manwolf backpatch transfers.

The color scheme and details lean heavily into the appearance of the Manwolfs in the Be A Manwolf Today shoe commercial and the Mister Heavenly – Bronx Sniper music video. Keeping some elements consistent but varying the vest and pants colors kept things interesting while working in a sizable batch. This project also motivated me to both practice applying transfers as well as make my own, which I highly recommend trying out! The ganger names are pulled from the delightful Fighting Baseball 1994 Roster and a couple of nods to Skate or Die!

Especially with the new House of Iron goodies on the way (cyberdog on skateboard incoming), I am excited to grow my gang in the future! I’ve already gotten a head start with a few more options for initiates, an Ambot, and potentially a game board influenced by the Tony Hawk’s Pro Skater Warehouse level. 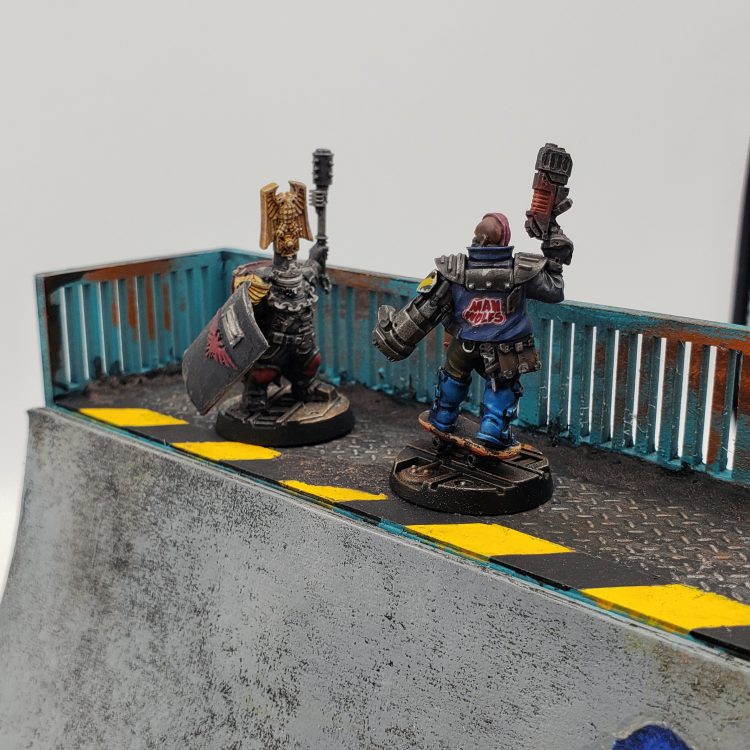 The Manwolfs clearly do not get along with the local constabulary.

Have you had a chance to use your sk8r bois in battle yet?

Since I finished these dudes uhh… 15 minutes ago I have not been able to put them on the tabletop yet. In terms of loadout options, eagle-eyed readers may see that I’ve taken some cues from Dan and Genghis Cohen’s previous Orlock articles. After two campaigns with reasonably reticent Chaos leaders, I am ready to get into the thick of it with a counter-charging Roadboss.

Putting a plasma gun on my leader is a bit dicey, as my arbitrator Edward came up with what I consider to be THE BEST NECROMUNDA HOUSE RULE:

Necromunda fighters are not known for subtlety or restraint. If they are using a Plasma weapon and want to fire it on ‘low’ power mode, they must take an Intelligence test. If the test is failed they must fire on ‘maximal’ instead.

Steal this rule and thank him!

A: Always. B: Be. C: Overcharging. Hey, wait a minute. Is that guy on the right doing a sick ass kickflip?!

Can we get a little bit of backstory for the Manwolfs?

After a rival gang destroyed their skatepark lair, the Manwolfs have been on a quest for revenge… and to find the perfect spot. 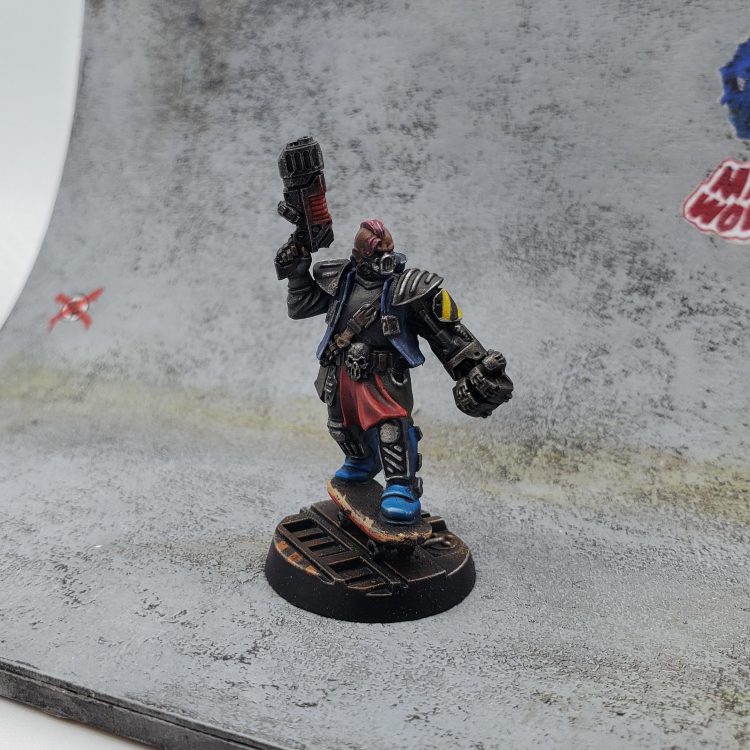 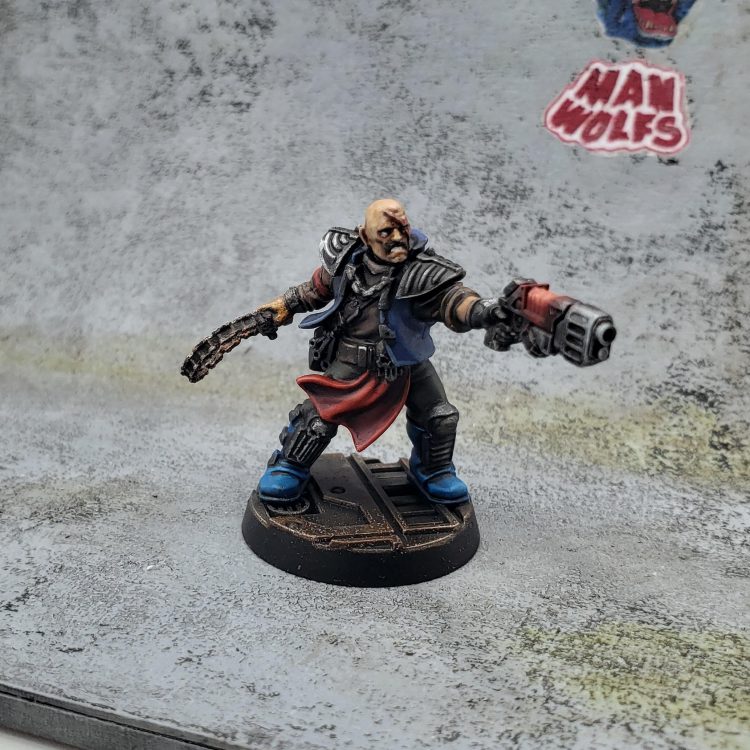 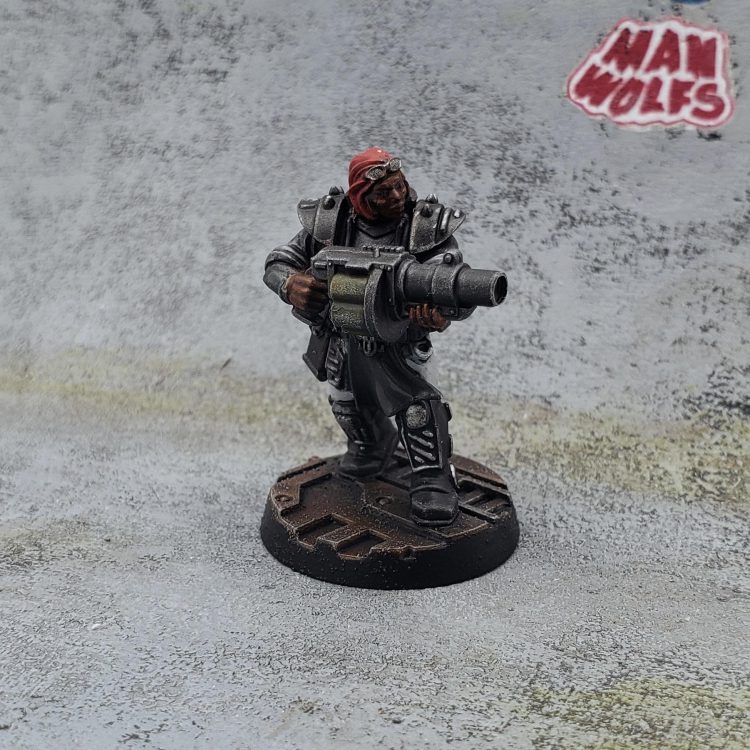 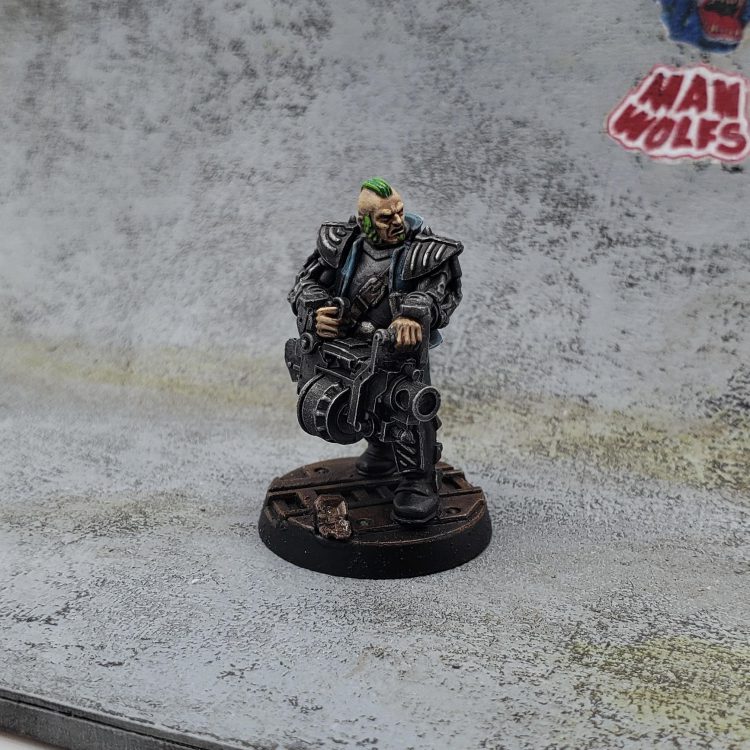 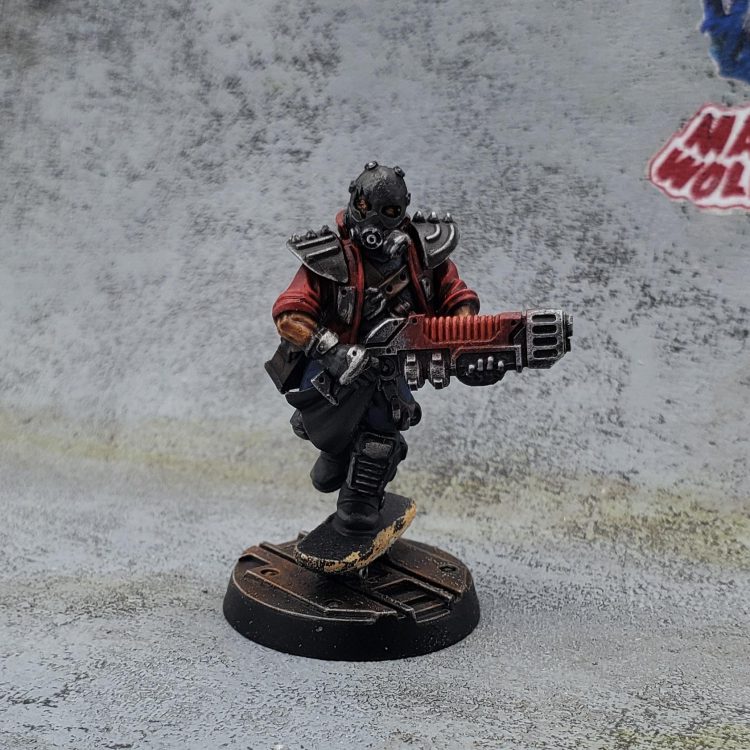 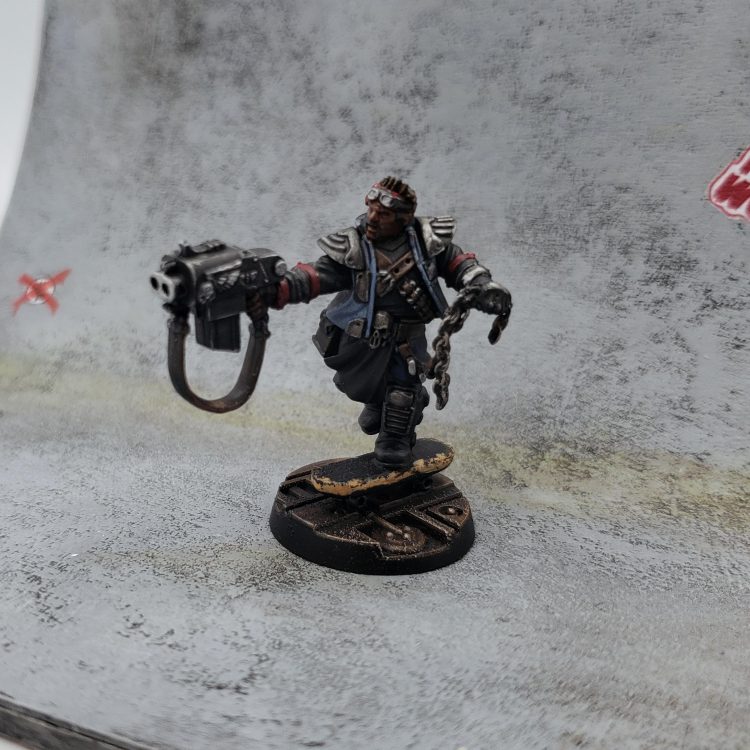 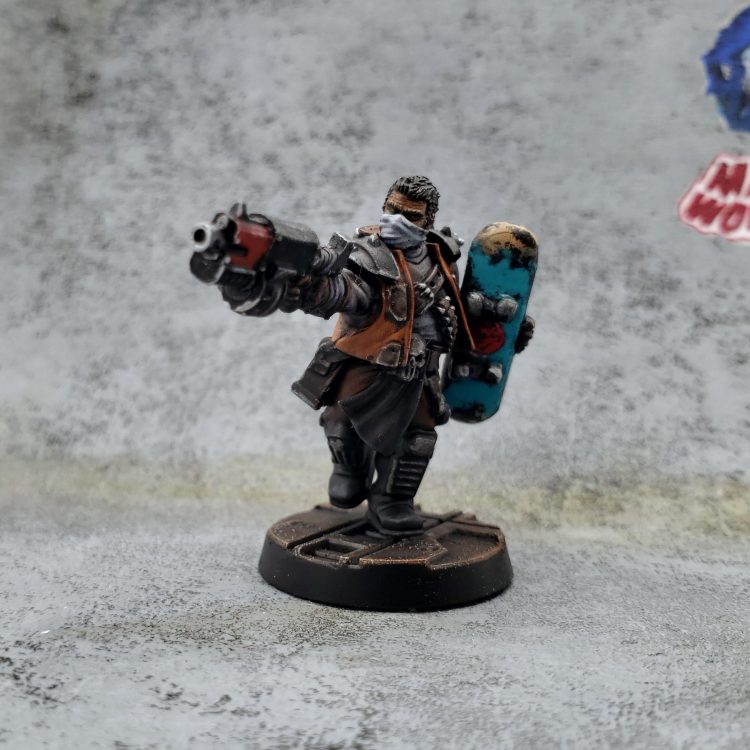 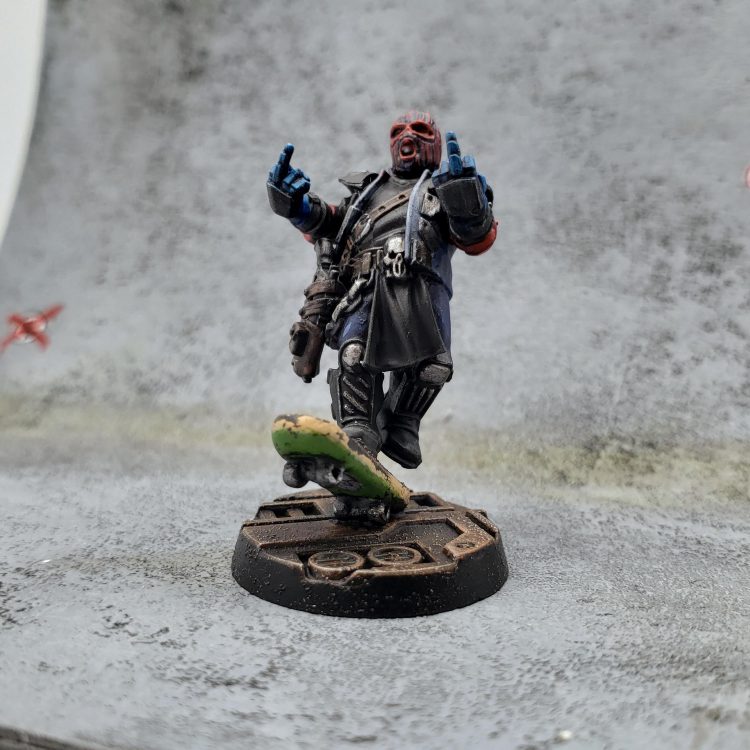 Gutter, the absolute best of the bunch 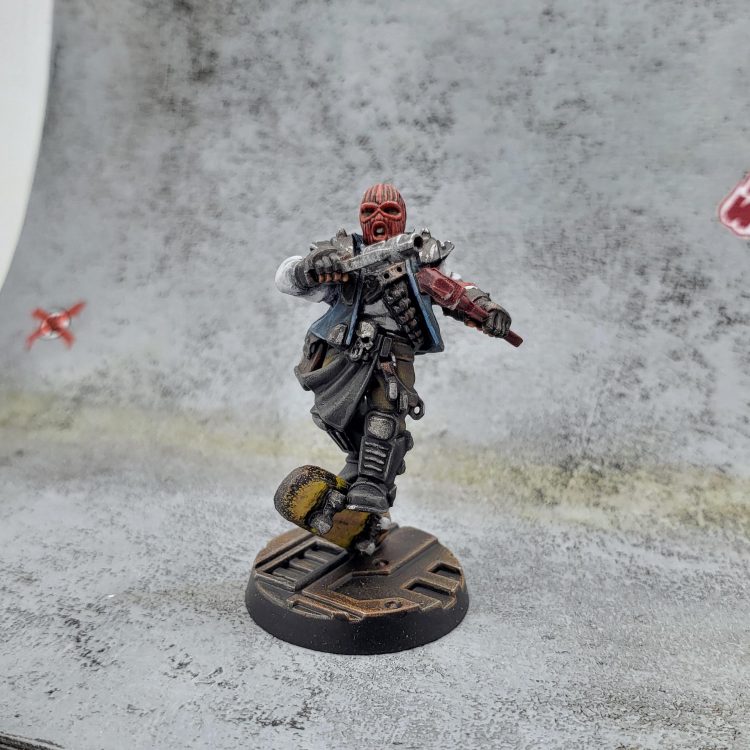 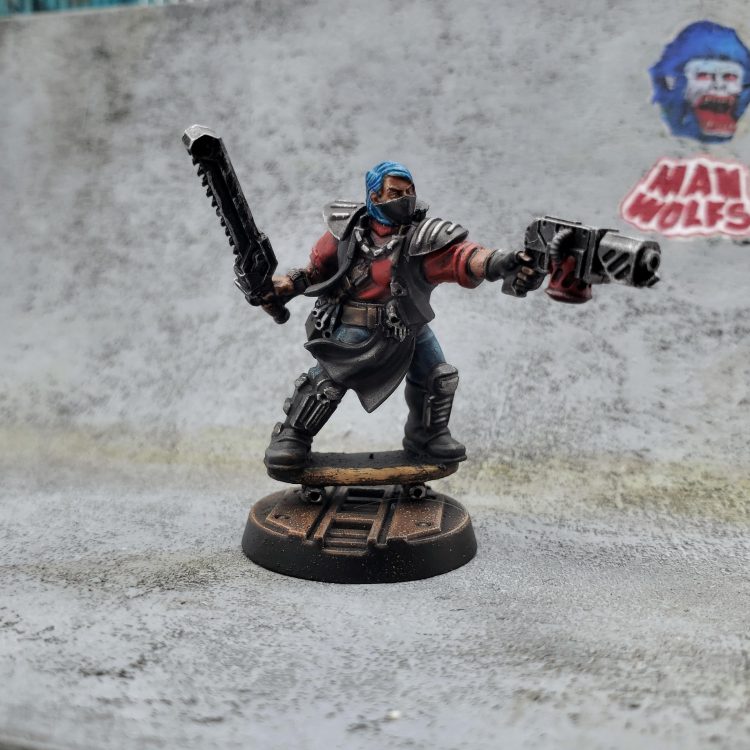 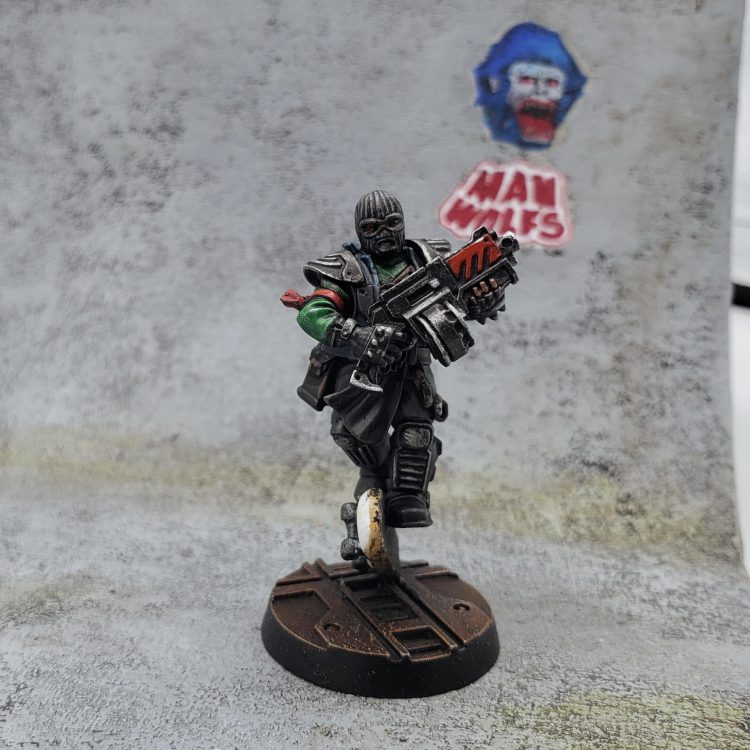 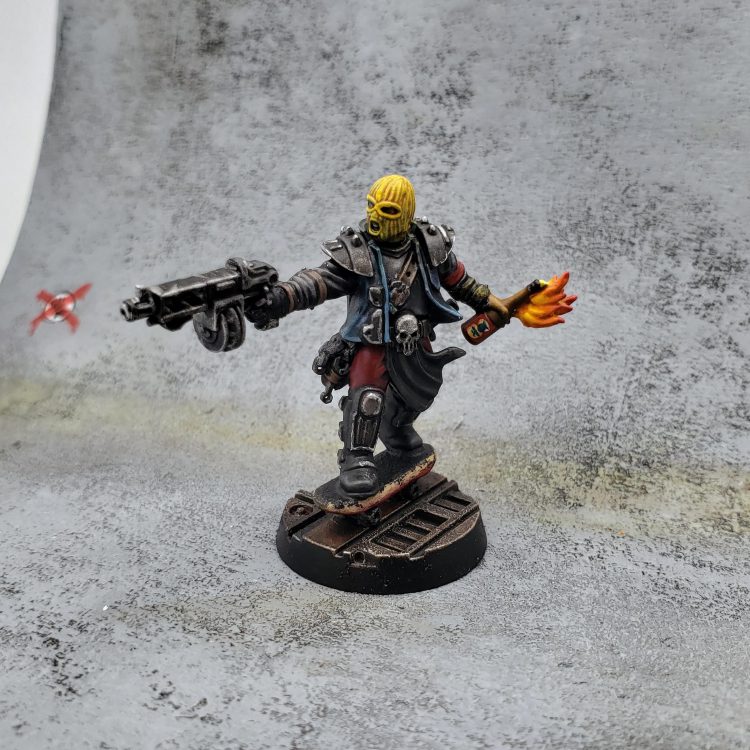 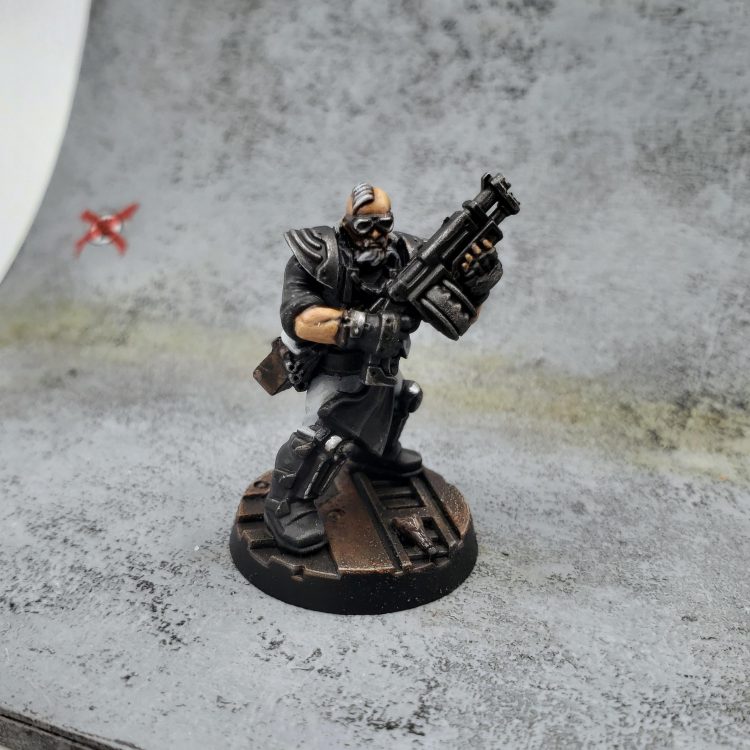 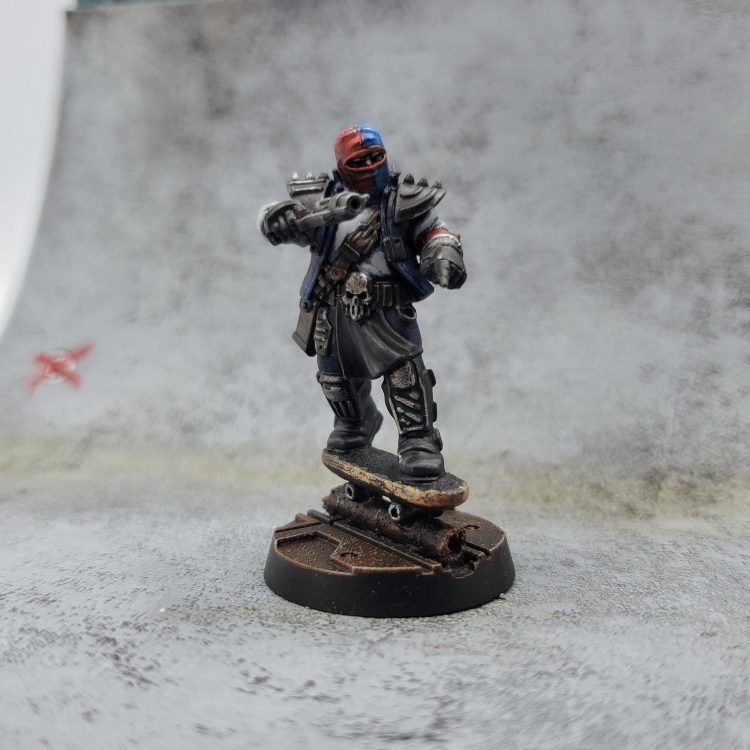 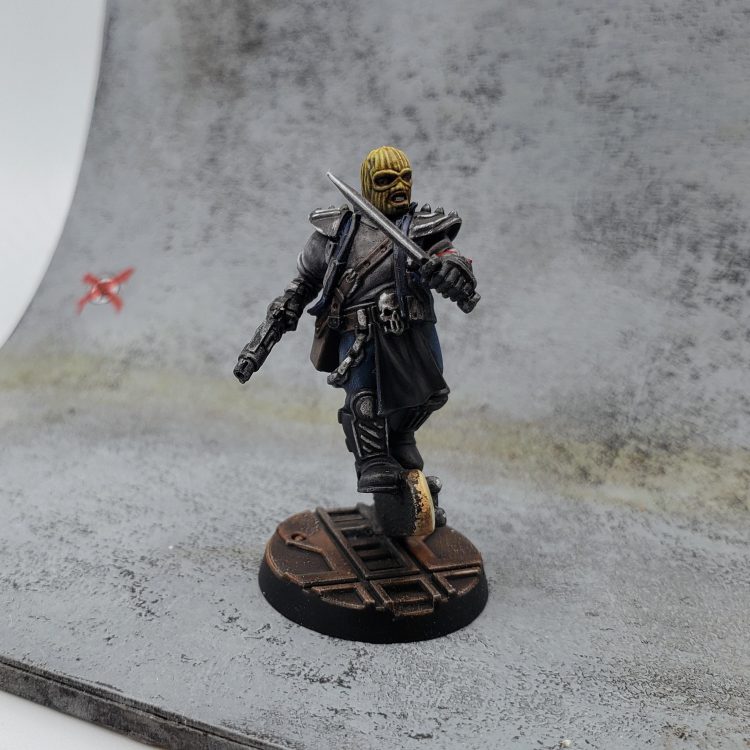 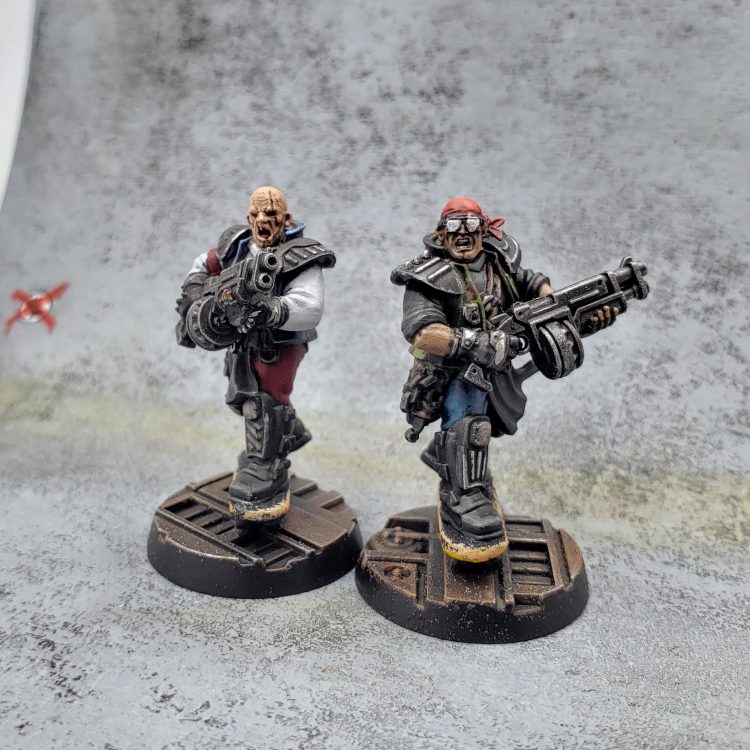 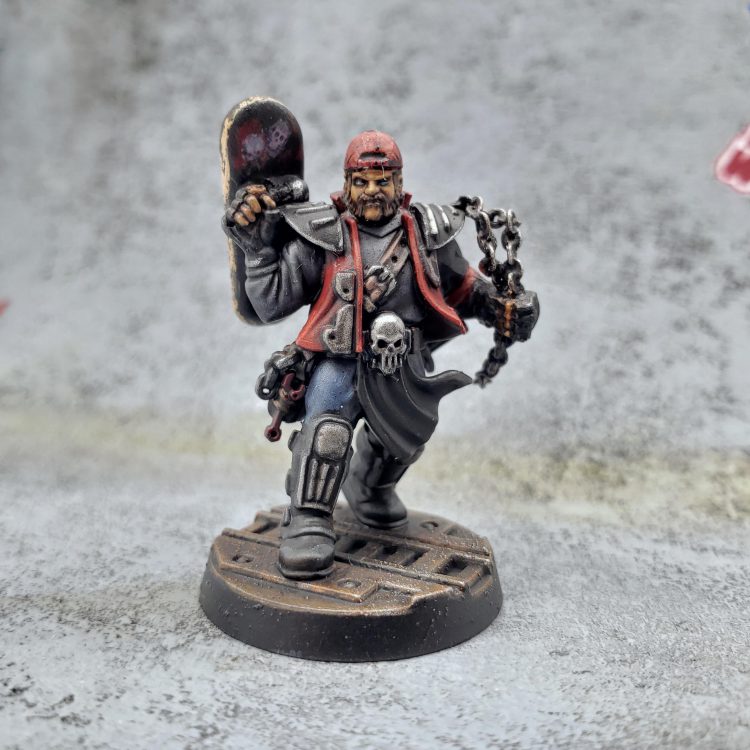 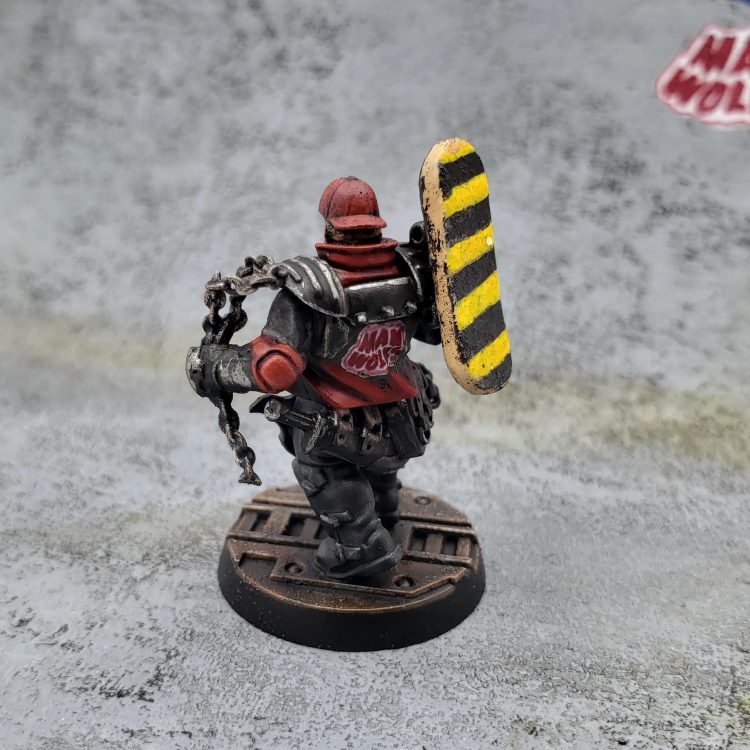 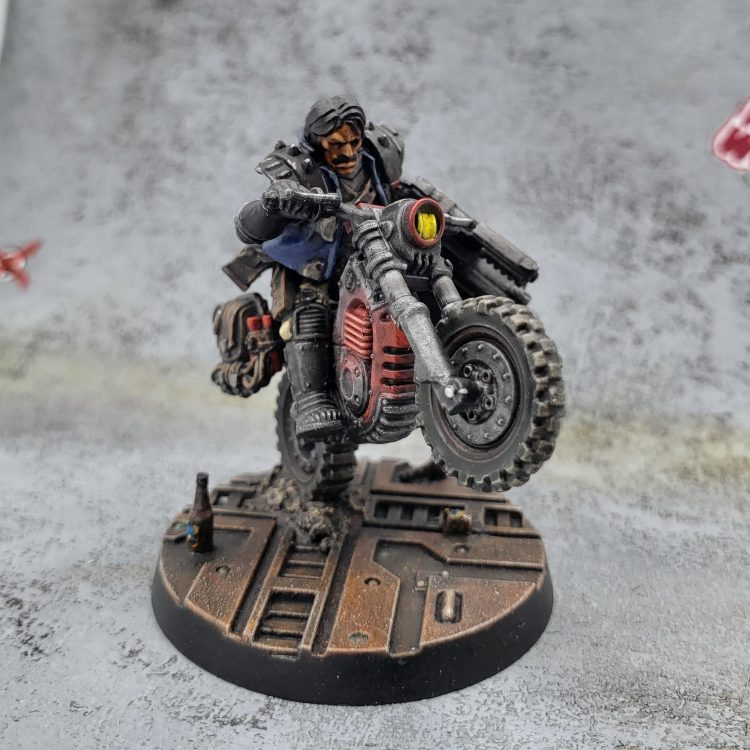 Vennet, the Manwolf version of a Lugger 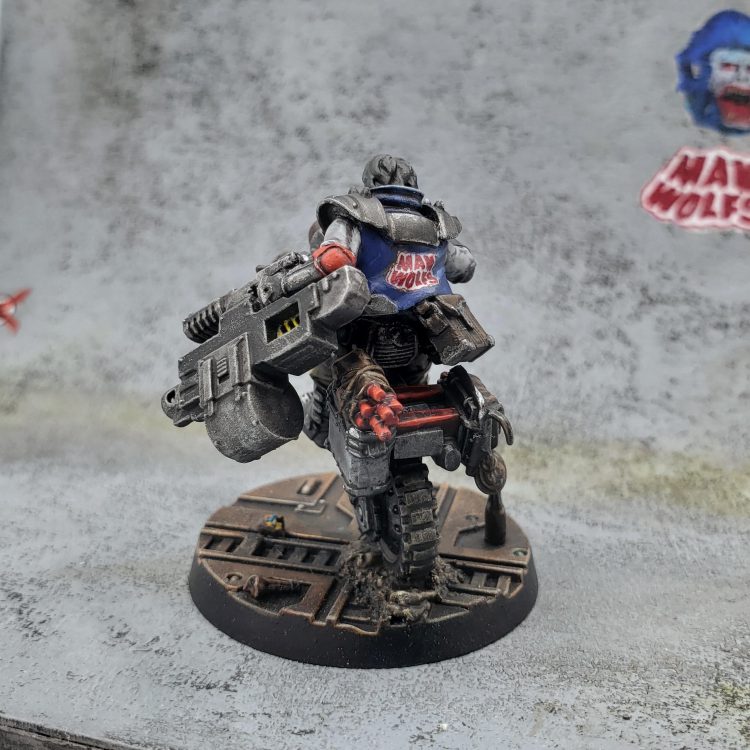 Big guns, and plenty of boom 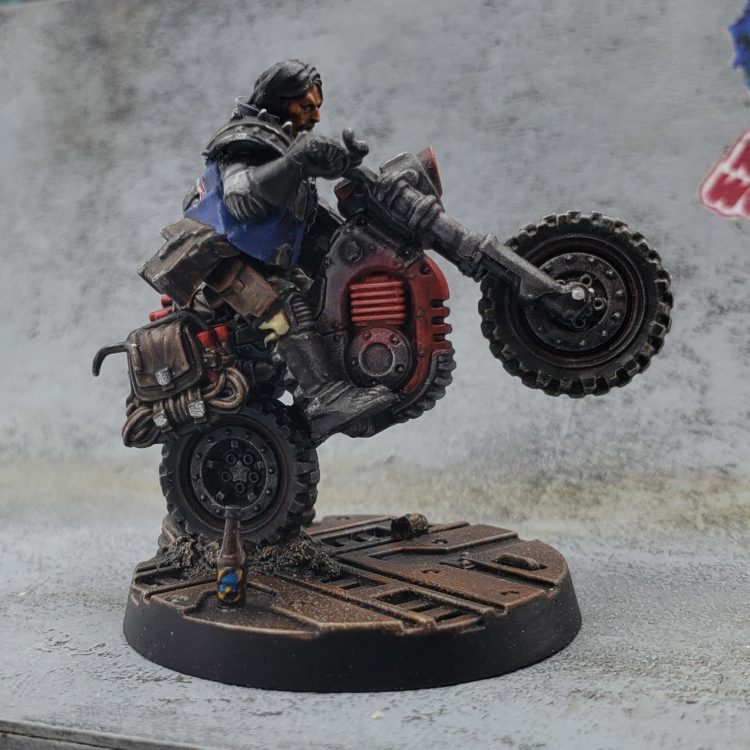 Thanks so much for sharing your gang with us, Kevin, and welcome to the team! I know we’re all looking forward to hearing more from you in the future!