Welcome back to another edition of Necromunday, Scummers! We’re heading back to the Lost Zone for the penultimate (maybe) time! This week, we’re talking scenarios. So far, we’ve given you all a whole plethora of ideas with our Lost Zone module, but no plan to string together games. Well, that changes now!

Before we get into scenario selection, let’s talk about an entire Lost Zone campaign. You’re obviously going to have a start date for your campaign, but we strongly suggest having an end date, too. Campaigns can get stale if they’re left to run for too long, and no one wants to jump into a campaign that’s been running for 18 months and each gang has a gang rating of 6000. So, have an end date. A fun way to end the campaign is with disaster! Perhaps the last campaign week ends with an awful hive quake that buries the zones being fought over and millions of tons of rubble! Or perhaps the sump sea rises to swallow a settlement whole as the gangs try to settle their grudges one last time, climbing ever higher to avoid being drowned! Maybe even any survivors can make it out of the Lost Zones to start their own new gangs for the next campaign.

Let’s quickly cover the idea of a campaign week. In our territories article, we mentioned the idea of a campaign week as when territories will give up their income. So, it’s important to set these up as they have an impact on the campaign. An Arbitrator can decide how long they want a campaign week to run, but we generally run our campaigns with two real-time weeks making up one campaign week. We’ve found that asking players to get in at least 1 game of Necromunda in a two-week span is generally a pretty easy ask, as most people have lives, families, and a ton of other things to do with their time. If your group is made up of younger hobbyists (or retirees), you may want to have a 1:1 ratio of real weeks to campaign weeks as your players might have more time for gaming.

Lastly, let’s consider Downtime. All the official campaigns include a period of Downtime where gangs recuperate and resupply. This is a good idea! Incorporate some Downtime into your Lost Zone campaigns. Maybe have a fun multi-player battle at the halfway point to spice things up and garner some momentum for the end of the campaign.

The last thing we have to cover before we can get into the selection process is Challenges. Who is actually going to play who? There are a couple of ways to do this. The Arbitrator can set matchups for each campaign week, or can institute some sort of challenge system. Both are good ideas, but letting the players have some agency in who they play is always a popular move.

As an Arbitrator, if you’ve settled on a premade matchup system, it’s as easy as posting the matchups at the start of the campaign week and telling your players to get after it.

If you’re instituting a challenge system, it’s a little more complicated, but a lot more flexible. We’ve seen many different systems in place over the years of playing this silly game, but the best way to do things that we’ve found is to let the gangs with the lowest gang ratings pick their opponents first. A low-gang rating gang isn’t done any favors when they’re matched up against the big leaguers, and this system eliminates the possibility of the stronger gangs picking on and targeting the weaker gangs. This way, the weaker gangs in the campaign can pick their opponents and hopefully make it up to the levels of the stronger gangs by the time the end of the campaign rolls around.

What about pickup games?

Good question! Some players may have more time on their hands and can play more games than others. Some players spend every Sunday night furiously writing articles for some dumb website. It’s a wide world out there. Anyways, there are always going to be players who want to get an extra game in or two each campaign week. We don’t want their gang to get too good compared to the other players who can’t play that much, so how do we let them get games in, but not let them rack up obscene amounts of credits or rep in the process?

The answer is simple: The Open Hive War deck! It’s great! The scenarios are balanced, the rewards aren’t game breaking, and the whole thing is a ton of fun! We’ve in fact, written an entire article on how much we love it.

You might be thinking that this deck has been out of print for 6 months or so, but have no fear. In the link above is an online resource that can be used to generate Open Hive War games without using the deck at all! We also have suggestions to help balance things out even more, so click over and check it out. It’s a great way for players to get in the games they want to play and not run away with the whole campaign. 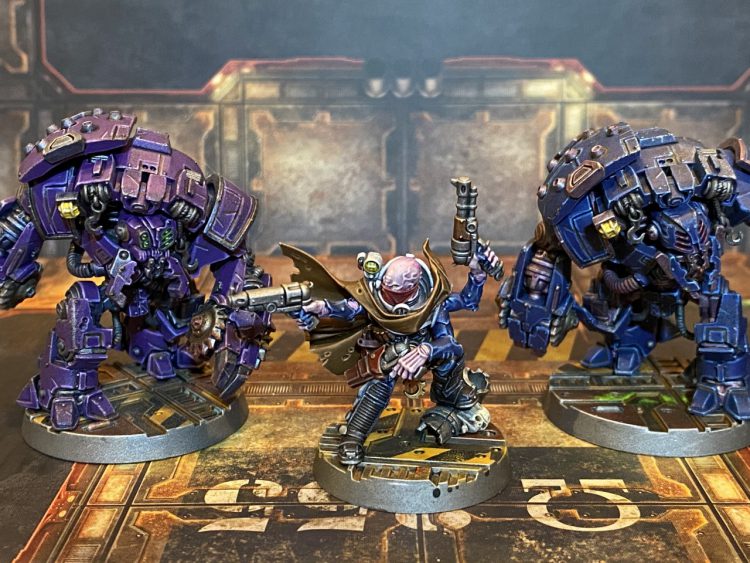 Scenario selection in a Lost Zone campaign can be done in 2 ways:

The first, and probably most obvious way to get a game going is to have a narrative reason to fight. For instance, my Orlocks may have lost a couple of games in a row and are reeling. Jules’ Delaques have decided to strike when the iron is hot, and target one of my territories for a raid. Jules and I decide to play a Sneak Attack scenario to embody the opportunistic Delaques kicking the Orlocks when they’re down.

However, not every two players are going to be able to come up with a story on the spot to characterize their games, so we’re introducing:

A while ago, we did an article series about scenarios in Necromunda. In the third article, we developed a table for each of the official campaigns because the tables included with the rulebooks are completely garbage. With these tables, players are able to quickly choose thematic and balanced scenarios. For the Lost Zone, we’ve decided to expand upon this idea. Cribbing from these earlier articles, we’ve developed 3 tables for players to use when generating a scenario to play. They are:

Before a game, the challenger or gang with the lowest rating picks which table to roll on. They roll 2d6 and consult the appropriate table. Afterwards, the players set up and play their game. Let’s see what these tables have in store for us:

We’re finally getting to the end of our Lost Zone module. Stringing together games and choosing which scenario to play are nearly the final pieces of the puzzle. Hopefully, with this article, you’ll be able to keep your campaigns running smoothly and give your players the best chance to have a fun and fair time while playing their games of Necromunda. As always, if you have feedback or just want to reach out to us, drop us a line at necromunday@goonhammer.com!

We’ll see you next week, Scummers! Could it be the (potentially) final edition of the Lost Zone module? Or is Fowler going to write that psychic powers article he’s been threatening to write for 4 months? You won’t know if you don’t come back and read it!

Thanks for reading, friends, and be well!