With House of Blades still out of sight, and Covid-19 stopping us from getting any games in, we’ve decided that it’s Mailbag time!

As always, we’d like to stress that we’re laughably unofficial, as far as any Necromunda guidance and suggestions go. We’ve got some ideas about things, and we tend to think that they’re generally pretty good ideas, but always defer to your Arbitrator for the final ruling. They’re the boss, Scummers!

Did Master-crafted weapons for all gangs get nerfed in House of Chains? – Tom C.

Jules: Not quite! Some Goliath fighters are able to take Master-Crafted weapons straight out of their House Equipment list, but these items perform a bit differently than what most folks are used to.

There’s enough discrepancies in the wording and implementation for the ability between the two books that we’re inclined to treat most Master-Crafted weapons as having the GotU version, except those purchased specifically through the Goliath Armory. (They can still grab the better versions from the Trading Post, if they’re so inclined.)

It remains to be seen whether the HoC version of Master-Crafted weapons is going to be the standard going forward. With only one “House Of” book released so far, we’re not quite certain which aspects are going to be consistent across all/most gangs going forward, and which changes were unique for Goliaths. We’ll have a better idea once House of Blades drops, but for now I’d recommend that Master-Crafted weapons purchased from the Trading Post as regular Status Items are treated the same way they’re written in Gangs of the Underhive.

How strict should my group be with the no pre-measuring rule? – Alf

Dan: Very strict. Necromunda is not 40k, where units have advanced targeting computers and access to orbital tracking data and all that jazz. It’s a bunch of probably-starving yahoos with guns that barely work, blasting away in dim corridors. The uncertainty around range should be treated as a feature, not a bug.

Jules: Not strict at all! Everyone loves the idea of no pre-measuring right up until they start playing a person who works construction and can eyeball the distance between two models on opposite sides of the board down to the quarter-inch. There’s already a million ways every single situation in Necromunda can go wrong, not being allowed to use your gun at all in a round because you’re not good at guessing how far away you are shouldn’t be one of them.

Dan: Jules is only saying this because he works in construction and can eyeball distances like a pro. He’s feeling guilty, you see. 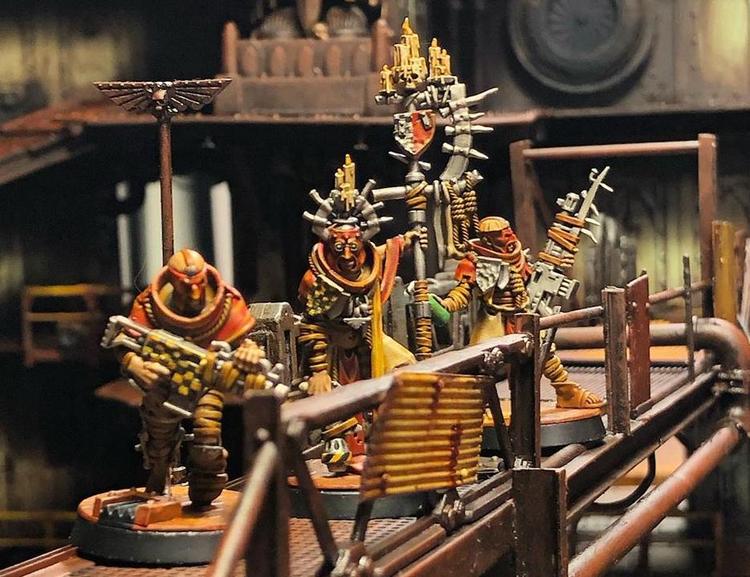 What would you guys most like to see in the future for Necromunda? – Ern W.

Dan: I’d like to see a fully-updated rulebook in the style of 9th ed. 40k. That and an updated Trading Post and Black Market table all in one place. Ideally, they’d just release all of the House of _____ books at once, too. That would be kickin’ rad.

Jules: An Online Trading Post (purportedly in the works) is a big one for me, since that’d help alleviate a ton of the reliance on Gangs of the Underhive as the House Of books cause it to gradually fade into obsolescence. Since that’s not an exciting answer, I want the Eye of Selene, with a brand spankin’ new campaign system along with it, ideally one that isn’t just another reskinned Dominion. Or Ash Waste Nomads! Or Scavvies!

Jules: It’s possible, it’s viable, and it’s a hell of a lot closer to the true Necromunda experience than an endless series of Skirmishes, especially if you happen to be quarantined away with a roommate or significant other. The primary concern with a two-person campaign is that the typical method of ensuring a somewhat balanced battle is usually to pit a pair of similarly powered gangs against one another, and that’s not quite possible here! One player is always going to have some form of upper hand against the other, sure, but there won’t be a third or fourth gang around to go and challenge while you’re hiding out from the Top Dog.

If it’s just the two of you, be generous with the Underdog Bonuses. Flub the occasional Memorable Death Injury into Out Cold or Humiliated. Try to keep things on a slightly even footing, because allowing one gang to snowball into an unbeatable behemoth is only going to kill both of your enthusiasm in the long run.

Dan: A two-player campaign is also a great way to go all in on narrative contrivance. Let each game fully influence the next one! Change up missions to suit the story you’re crafting! Agree on wildly divergent stuff, and get after it! Think of it more as a role-playing campaign, and you’ll be moving in the right direction.

Why did you guys bother with old versions of Psychic Powers? Isn’t the newest one the correct one? – TyphoidManny

Jules: I’d love it if that was the case, but the waters are a bit muddled by the fact that some powers, like Scouring, are featured with two different sets of rules in the same book. (Most recently in Book of Ruin, pg.34 and pg.99) We’ve standardized them into just The Single Good Scouring Version in our groups, but it’s just as likely that the official developers’ intent is to have every instance be its own unique thing, even if it shares a name with five other virtually similar powers.

It may very well be the case that the variations are the result of some copy+paste errors or a lapse of consistency checking, but since the developers have doubled-down on the “Inconsistencies Are Intentional” stance with things like the FAQ ruling on Estus Jet, I’m willing to let it slide for now.

Dan: We also love providing our readers with as much context as we can jam in there. Necromunda is the very definition of “labyrinthine” and sometimes the why is just as important as the what. 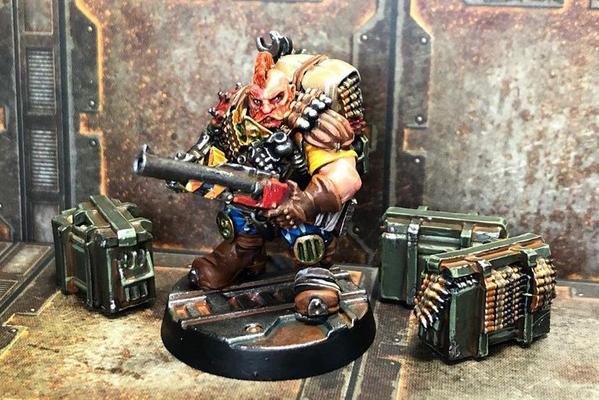 Why do Slave Ogryns have Suspensors in their list? None of their weapons can use them. – Jay M.

Dan: Your guess is as good as ours, Jay. Maybe some Arbitrators will allow Ogryns to buy things like Heavy Stubbers from the Trading Post and Suspensors in the house list would be very nice for that.

Jules: The only thing I can think of is if it was possibly supposed to be a Suspensor Harness (Book of Peril pg.95)? Then they’d be allowed to dual-wield a pair of Two-Handed Hammers or Axes. It would still be a terrible choice, mind you, but it would at least do something. Elsewise, we’re stumped.

Your opinion on this weapon/ability/gang is WAY OFF! – Half of Our Messages

Jules: Yes, probably? We’ve spent an ungodly amount of time reading through these rules, running mini-scenarios to test specific situations, and summarily inflicting our findings upon our poor unsuspecting play-groups, but at the end of the day we’re just a pair of Arbitrators. We’ve got plenty of blind spots, mostly from all the weapons and tricks that never reared their heads in our little Underhive metas. (Let the record show that we have finally warmed up (ha!) to Hand Flamers.)

Dan: That being said, please keep telling us we’re wrong! Feedback of any type is always appreciated. We’re only human, after all. Well, I am. I’m getting increasingly suspicious that Jules is actually the Murder Cyborg we’ve all heard so much about…

That’s All For Now!

Thanks to all the folks who’ve taken the time to write to us! We try to respond when we can, and on the off-chance that we figure out something useful or profound we’ll expand on it a bit in our next Mailbag.

Starting real soon, Necromunday will be adding a third member to the team, an knowledgeable fellow who goes by the name’a Genghis Cohen. He’s an great Arbitrator in his own right, and an Orlock player to boot! It’s going to be good times, Scummers. Big plans!

Keep the questions coming! Shoot us a line at necromunday@goonhammer.com, on Facebook, or in the comments below.