Scummers, these fancy Nobles keep sauntering around like they own the place, and we’re not gonna stand for it! Sure, they promise all sorts of extra training and free credits and heavily-armed manpower if we ally with them, but… Wait, why are we against this, again?

The Noble Houses of Necromunda exist on a level that is borderline unfathomable to the average Underhive denizen. Down here, where violence is as natural and mandatory as your next gasp of thrice-recycled air, a society up in the Spire where all one’s basic needs are accommodated and disagreements are settled with words seems unthinkable!

Still, there are some Uphive disputes that can’t be settled through mere polite negotiations, and unscrupulous Nobles are hardly beyond paying off a lowly gang leader to ensure that a vote or contract is decided in their favor. Unofficial of course, but there are even rumors of some Noble Houses keeping certain gangs on retainer in a semi-permanent alliance!

Unlike the Guilders and Recidivists, both tied to opposing ends of a Law & Misrule campaign, the Nobles care little of petty constructs like Law-Abiders and Outlaws. They’ll offer their assistance to both extremes, as well as any gangs existing in the grey areas in-between! 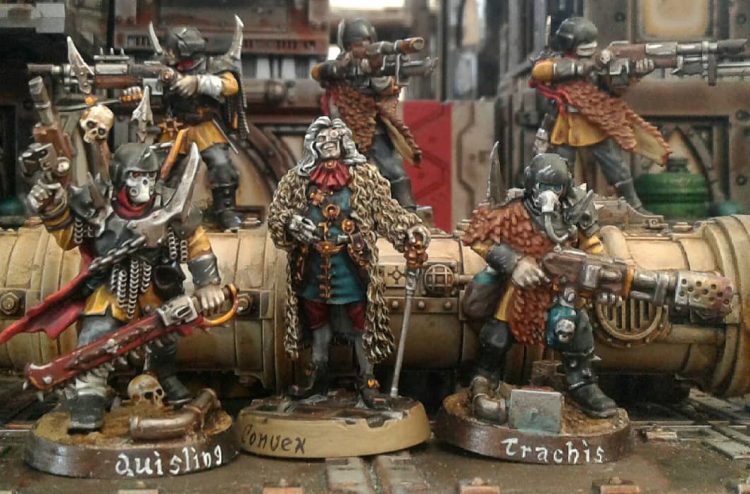 This is a fellow convinced that he’s better than you. (Insta: @caliumanderio) 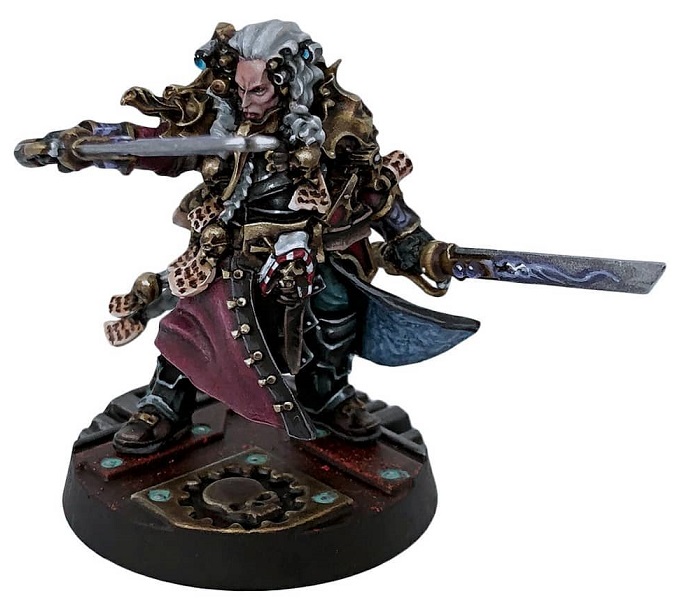 He prefers yelling orders, but it’s always smart to listen to the man with the Power Swords. (Insta: @fragorn_irik)

House Greim specialize in providing private security and personal armies to the obscenely rich. Members of House Greim style themselves after military officers, though no child of such a noble house would ever deign to set foot upon a real battlefield. Still, House Greim has excellent tactical minds within their ranks, and these sons and daughters of Greim will sell their abilities to Underhive gangs, if the gang can afford it!

Any gangs allied with House Greim gain the ability to re-roll all Ammo checks that they’re required to take. In a land fraught with 5+ and 6+ Ammo rolls, Unstable weapons, and high rate-of-fire Rapid Fire weapons, this ability can be a godsend.

If that’s not enough by itself, check out the pure leadership potential of their Retinue, the…

The Attaché is made up of two members, a Krieg Mester and a single Jagerkin. They’re not quite as brutal on their own as some other Retinues (though don’t sleep on the Jagerkin!), but they’ll bring some tricks to augment any gang they’re fielded alongside.

The Krieg Mester is a tough nut to crack, clad comfortably in his Light Carapace armor and guarded by his pal thanks to the Bodyguard rule. He’s not a combat beast, swinging and shooting on 4+, but is more than capable of defending himself with his Bolt Pistol and the ever-deadly Power Sword. His role is more as a force multiplier, since his version of Overseer is able to be used on members of his host gang! (Most Retinue leaders have Overseer, but with a specific restriction limiting it to other fighters in the Retinue that the Mester lacks.) Overseer is, well, it’s Overseer, and this is virtually the only way you’ll ever have more than one instance of it in a single crew. That’s powerful stuff!

His pal, the Jagerkin, is more of a traditional brawler, with a suit of Mesh Armor and a Combat Shotgun. Salvo and Shredder rounds will easily perforate any enemies that get too close, but try not to range out too far! His purpose is to keep the Krieg Mester safe, so that he can continue to shout orders to nearby gangers for as long as possible.

If a gang is using the Greim Military Attaché in a battle, we recommend that the Crew Rating be increased by 495 Credits.

Before every battle, House Greim will snatch away a single ganger, prospect, or juve, to be Seconded to the Militia. This fighter immediately rolls a Lasting Injury, and all 61-66 Critical results are counted as a permanent Memorable Death. In this eventuality, Greim will reimburse the gang for the full credit value of the expired fighter, which isn’t too bad.

If they survive, however, they’ll be granted d6 Experience, though they’ll still have to miss the upcoming battle if the Injury result lands them in Recovery. In the later stages of a campaign, the impact of being down a Gang Fighter can be minuscule, but early on every ganger and juve in a roster is probably intended to be in their tiny gang’s crew. Missing out on one randomly every game can be devastating, unless a gang compensates by hiring extra bodies far beyond an anticipated Scenario’s crew size.

In addition, if a gang allied with House Greim loses a battle, they must also send off another fighter to be Seconded to the Militia in the post-battle phase. A gang can choose not to comply, but this will Test the Alliance.

Finally, if that wasn’t enough already, every single juve on a gang’s roster must roll a d6 in the post-battle phase. On a 1, they are immediately Drafted, and are deleted from the roster along with their weapons and wargear. As before, a gang can choose not to comply, but this will Test the Alliance. 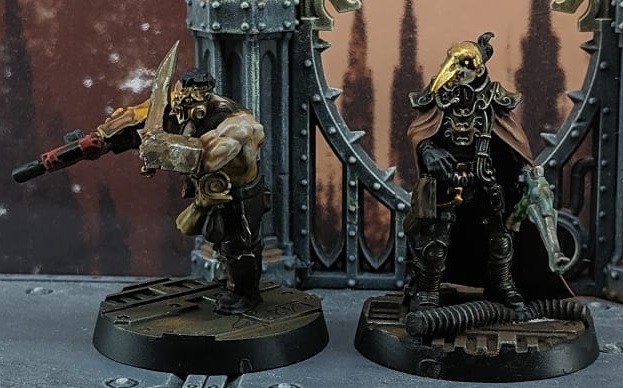 House Ulanti are consummate hedonists, the ultra-wealthy elite of Necromunda whose thirst for luxury is matched only by their fickle loyalties. Their agents embody these ideals, flickering in a blur from enemy to enemy, provided their host gangs can continue to prove a worthy investment.

Always willing to spread the wealth to their most trusted friends and allies, an Alliance with House Ulanti will grant a gang a bonus of 2d6x10 credits during the Collect Income step of the post-battle phase. If having an extra 20 to 120 credits to play around with each game sounds like it’ll add up quickly, you’re right! Just make sure that you keep winning those battles, or it’ll all come crashing down.

As insurance, the House has sent down an agent (or agents) as insurance for their investment. Presenting, the…

The Court Advisor is composed of, somewhat confusingly, more than one fighter. The Ulanti Courtier and her second in command, the Mirror Mask, are a whirling dervish of close-range devastation capable of evasive shenanigans that would put a late-campaign Delaque gang to shame.

An Ulanti Courtier is a formidable opponent, swinging at 3+ with her Power Sword and armed with a Toxin-dripping Needle Pistol as a backup. Opponents will be hard-pressed to pin her down thanks to her Displacer Field, which can negate any hits received on a 4+, in return for sending the Courtier flying a few inches randomly across the battlefield. (Occasionally off of a catwalk or over a pit, but those are the risks we take!)

Even if an industrious foe manages to fight their way past the Field and charge in, they’ll still have to contend with the Power Sword’s Parry trait and the Courtier’s Duellist ability, which allows them to strike first in close combat against charging opponents. Pair this with their Counter-Attack skill, giving one additional swing on these pre-emptive reaction attacks.

All this and then, if the opponent is still standing and able to finally swing, there’s a chance that the hit will activate that damned Displacer Field, sending the Courtier floating away yet again, laughing. And that’s assuming that you’ve even managed to get a hit in the first place, since the first one will probably be ignored thanks to a 3+ Initiative and the Courtier’s Step Aside skill!

The Mirror Mask is both identically outfitted and (functionally) identically statted as the Courtier, so hoo-boy, anyone facing a gang allied with House Ulanti gets to fight two of these jerks. Thankfully, the Mask doesn’t have the Duellist or Step Aside or Counter Attack skills, so they won’t be quite as infuriating to deal with in melee, but they do have Nerves of Steel, so pinning them at a distance will be a pain instead.

Their main gimmick is their Many Faces ability, which allows them to swap places with the Ulanti Courtier whenever the Mirror Mask is activated. This ability not only can allow this fighter to freely swap and swing on an enemy that the Courtier has already fought and engaged, but serves as a substitute for the common retinue Bodyguard ability to keep the Courtier out of trouble when she’s bitten off more than she can chew.

If a gang is using the Ulanti Court Advisor in a battle, we recommend that the Crew Rating be increased by 560 Credits.

When rolling for those sweet, sweet, 2d6x10 credits in the post-battle phase, be sure to avoid rolling a double! (You can’t, it’ll happen roughly 17% of the time.) In this unfortunate event, your gang will still pocket the money but the Alliance will be Tested. Why? We don’t know! Serves you right for trusting some fickle Nobles.

Any time a gang allied with House Ulanti loses a battle, they’ll be forced to Test the Alliance as well. In this instance, if the test leads to a Broken Alliance, the Nobles will immediately form a temporary Alliance with your opponent, instead! This will last for only their next game, and essentially means that your gang doesn’t get the 2d6x10 credits, and the gang that beat you gets them instead. 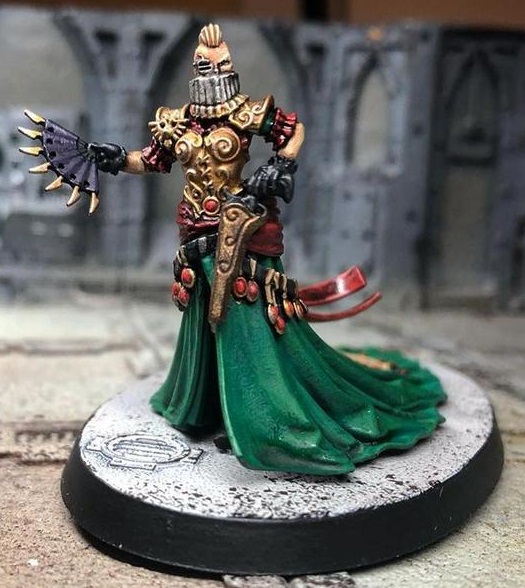 Seriously. They don’t care about you at all. (Insta: @heresy_era)

You’ll notice that for each of these Retinues, we’ve offered a suggested crew rating hike to be applied in all battles that these representatives take part in. At the moment, these numbers are primarily a raw representation based on the costs of comparable fighters from elsewhere in the game and Trading Post prices.

It will allow an opposing player, who for whatever reason is not also using an allied Retinue, to take advantage of Underdog Bonuses to compensate for being vastly outnumbered. It does not, currently, take into account the real and/or intangible bonuses granted by an Alliance, that would still be active even when the Retinue stays home.

In addition, we’ve also explored a narrative method of awarding alliances to gangs who are able to attract the attentions of these larger organizations and prove themselves worthy. Expect updates to The Old Razzle Dazzle as more Nobles venture down to the Underhive.

That’s All So Far!

We’re just as eager to explore more Noble allies as you are to read about them, so check back in with us once House of Iron drops in the Winter of 2020!

In the meantime, if you wind up using any of the Noble Alliances and want to report back with tips and tricks of your own, hit us up at necromunday@goonhammer.com. We’re always looking to learn more!