It’s Monday, Scummers! Everywhere else, Mondays are complete garbage. But here at Goonhammer, Mondays mean Necromunday! This week, Dan and Jules are rolling their recovery checks and SRM is taking point to show off his Goliath gang, The Butchers Bloc. 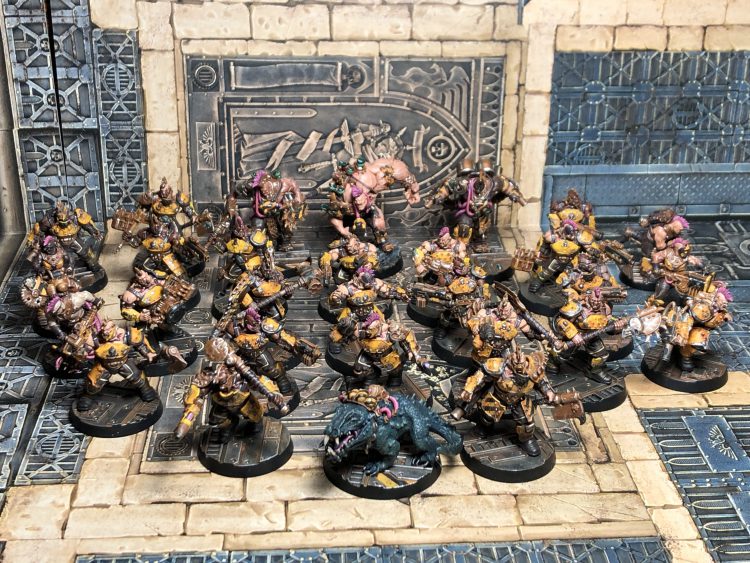 I started playing Necromunda in 2013. 40k was in 6th edition and my old Dorkamorka crew resultantly was starting to gravitate towards other games. We played the hell out of classic Necromunda for a good few years, and my Goliath gang, Team MEAT, rose to the coveted position of “stomps on baby gangs, but still gets owned by Van Saars”. Steakbomb, Whopper, and even little Cocktail Weenie eventually retired to a farm upstate when we put our campaign on ice. 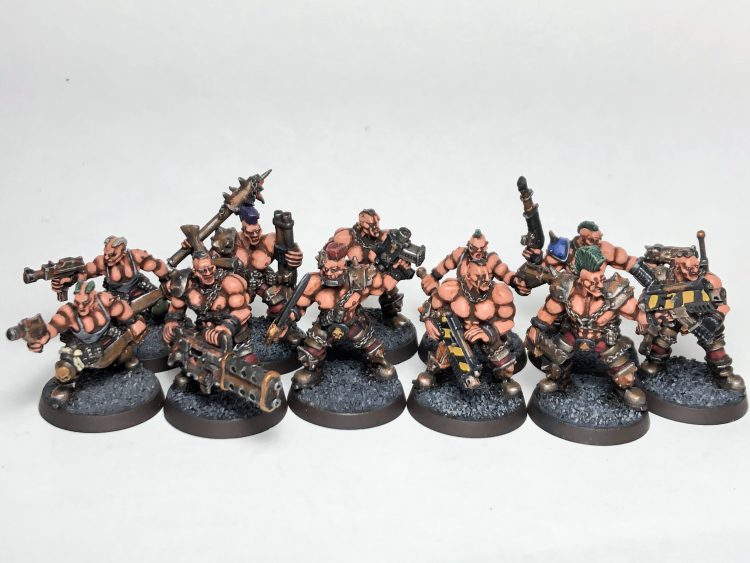 Why Goliaths? Why Meat Puns?

The answer to the first question is one of taste. The second is just because I’m dumb as hell. Goliaths had my favorite models of the last era, namely their refreshed “Fanatic” range of metals in the 2000s. I liked the Mad Max raider/professional wrestler/leatherdaddy look, and was thrilled that Specialist Games leaned even harder into it with the new range. I wanted to stick with stupid meat-based names for the new gang – these idiots are beefcakes top to bottom, after all – and there was more dumb pun meat on that bone, so to speak. 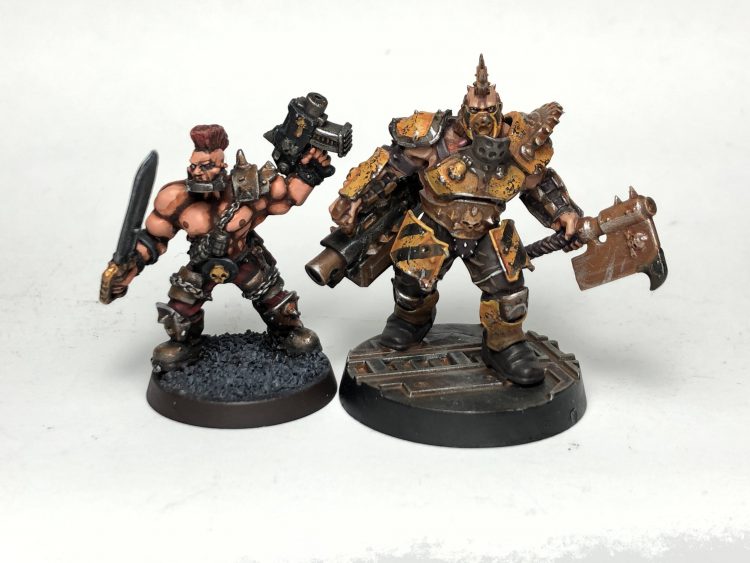 Be careful who you call ugly in high school. Credit: SRM

I wanted to explore the range of browns and oranges in the Citadel paint line and get the rustiest, grossest looking metal I could. I followed an old Ogre Kingdoms painting guide to get this gnarly rusted metal look, and it came out pretty textured and easy to apply. The problem was, when the models were finished they just looked like lumps of brown, orange-brown, and brown-orange. After some learning games and my first weekend event, The Necroslam Spa Weekend, I gave them a fresh coat of paint and added a layer of yellow to all their armor. Suddenly you could tell what they were supposed to be, and as a bonus they didn’t blend in with all the Underhive tiles anymore. You can still see this rust on every model, but it’s no longer all-encompassing. 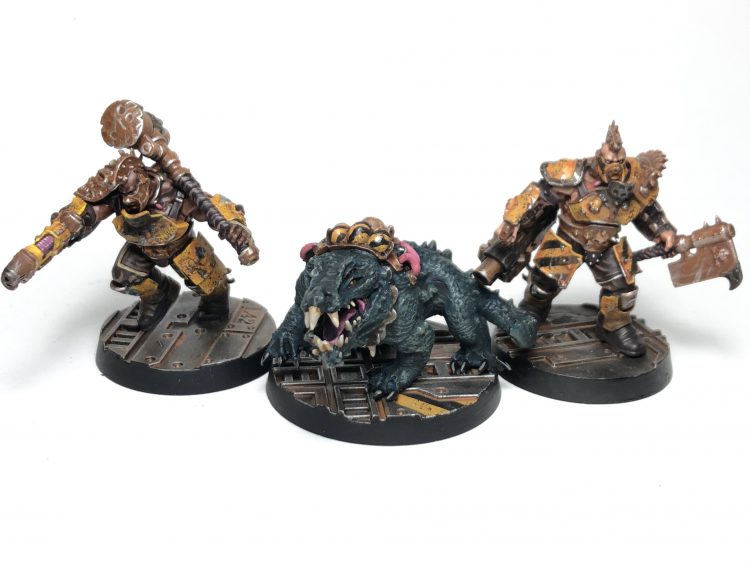 How Have They Performed?

The short answer is “way better than my old gang” – melee is far more viable in Necromunda 2017 than it ever was in classic. At the last Necromunda event I went to, Cinco de Necro,  they cleaned house under the guise of Big Muscla’s Hustlas. The name change was solely so I could diversify my pun portfolio to shift from meat-based to muscle-based joke-adjacent names. 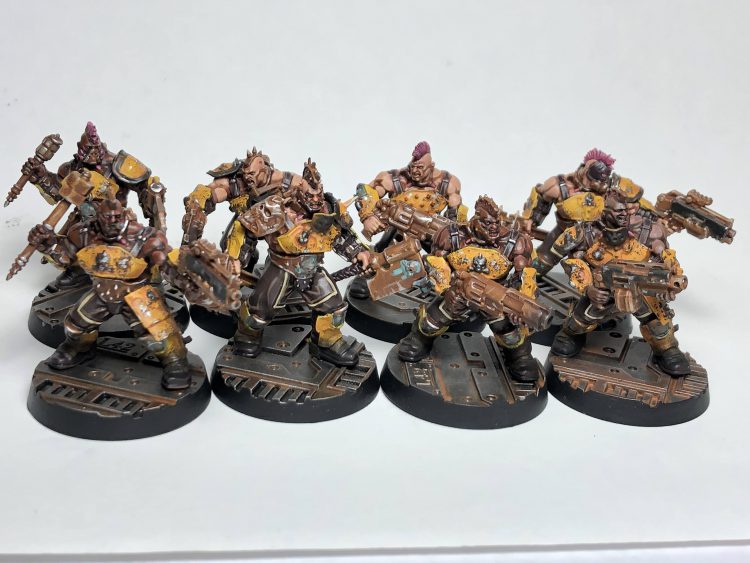 Since then, the Butchers Bloc took the field in The Necrofunda 2019 Slampaign with the local crew, playing on @40khamslam‘s gorgeous tables. We were in a rest period before the whole world closed down, but in the first few months they made a strong showing as the gang in 3rd place. That would be more impressive if our campaign included more than just 4 people, but it’s all a matter of perspective, I guess. It probably doesn’t help that most models in the gang are just using whatever equipment I thought looked cool instead of picking based on in-game effectiveness, but I never claimed to be good at this game. 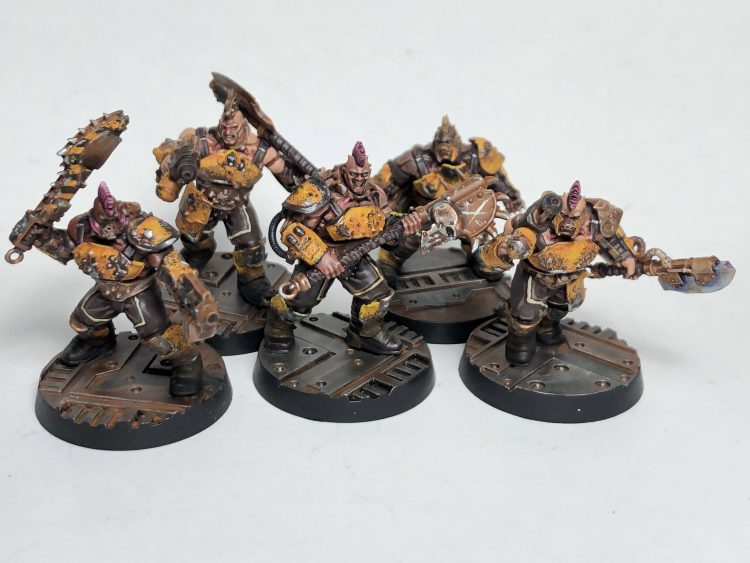 Unfortunately I haven’t gotten to play Necromunda in a post-House of Chains, post-COVID world, so I haven’t gotten to try any of the new toys and find out what works. I don’t really have explicit plans to expand the gang either. If they release some alternate sculpts to include more musclewomen in the gang or a new character model, I’ll be picking them up for sure, but at just shy of 30 slabs of beef I’m not in a rush to bulk up. 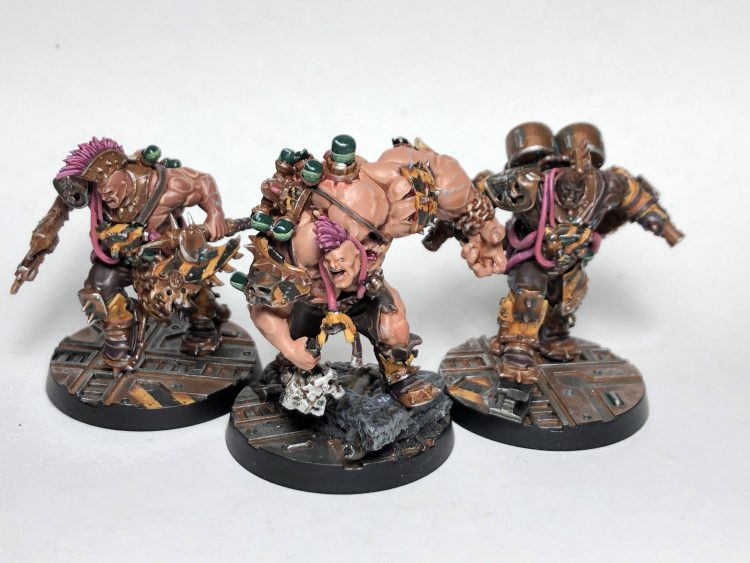