Hey there Scummers! Welcome back to another edition of Necromunday, Goonhammer’s longest running and least-read (update – upon review, Warlord Wednesday is our lest-read series, so get out there and start playing Adeptus Titanicus!) series! This week, Dan and Fowler are going to take a look at named Hangers-On: Bigby Crumb, Ragnir Gunnstein, and the brand new Doctor Arachnos. Not everyone knows about how useful and fun these characters can be, so let’s go!

Hangers-on are an integral part of any Necromunda campaign. Ammo jacks keep your weapons working, Rogue Docs patch up your fighters, and Sloppers keep the corpse starch flowing. Some gangs, like House Escher, can get specialized hangers-on that can unlock the potential of their unique rules. Hangers-on usually don’t participate in battles, and when they do, it’s generally a bad thing. Except for Ammo Jacks, hangers-on are rarely optimized for combat, and if they get hurt, they’ll high-tail it to right back where they came from, leaving their former employers high and dry.

That’s where named Hangers-On come in. Similar to Dramatis Personae, AKA named Bounty Hunters, the name Hangers-on represent specific characters that reside in the Underhive. They’re hired the same way hangers-on are hired: a one-time fee secures their services until they leave or get released. Where regular hangers-on are generally unwanted when it comes to combat, our three (so far!) named Hangers-on are not only useful on the battlefield, but you may even prefer their presence to one of your regular gangers! They all also have the following special rule, making it so you can use them in any battle, unlike regular hangers-on:

So far, our three special hangers-on are Bigby Crumb the ratling Slopper, Ragnir Gunnstein the squat Ammo Jack, and Doctor Arachnos the creepy Rogue Doc. They differ significantly from their hanger-on archetypes, so let’s take an in depth look at each one.

Gear comparison: Bigby comes in at the price of two and a half standard sloppers, and offers some unique benefits for the discerning gourmet. He gives up the slopper’s standard fighting knife for a soup ladle (i.e. a club that ADDS to the opponent’s armor save) and a stub gun. Losing 2 AP and backstab on melee isn’t the worst trade-off, as you definitely don’t want this guy in combat.

Statline Comparison: Bigby takes a hit in WS, moving up to 5+ with his mighty soup ladle. He also drops in toughness, falling to 2. Maybe leave Bigby at home if you are facing off against Corpse Grinders, as his willpower has raised to 8+. Bigby does get some minor stat boosts over the buck standard slopper: initiative moves from 3+ to 2+, leadership & cool drop from 9+ to 7+, and intelligence improves from 7+ to 5+. 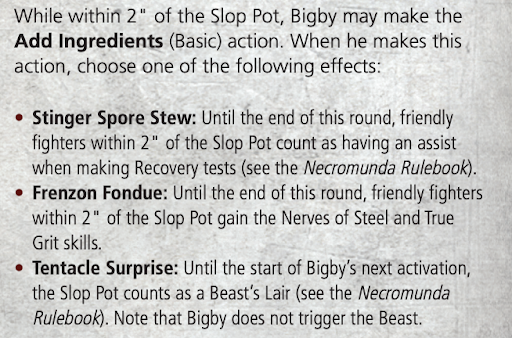 If he’s within 2” of his slop pot, Bigby is able to buff his friends or potentially tie up gangers with his culinary skills. Stinger Spore Stew functions as an emergency field medic ability, giving his nearby allies an assist in their recovery rolls. Frenzon Fondue is the most interesting of his recipes, giving a 2” bubble of True Grit and Nerves of Steel. Ignoring pinning and improving injury rolls has some serious potential – stick Bigby with your fire support for some extra survivability. Tentacle Surprise functions as an “oh shit” button or threat deterrent. Beast Lairs are swingy, but they can absolutely mess your day up.

Is Bigby Crumb Worth It? Sure! …but your mileage may vary. Much like a standard slopper, Bigby is best suited to a support role with larger gangs. Run Bigby behind a pile of chaos cultists and have him pass out stew when they inevitably get nuked. He also has some potential interesting uses as a durability buffer for heavy or long range support. Have him buddy up with a heavy bolter / plasma cannon champ and help them keep on firing.

Ragnir’s rules come with his blister and are Errata’d in the February 2020 Necromunda FAQ.

Gear Comparison: Ragnir’s loadout is a clear downgrade from the standard Ammo-Jack’s, which is disappointing given his cost and underwhelming special ability. The squat is rocking a shotgun and club (remember, that means AP +1!), while the Ammo-Jack can take a bolter / combat shotgun and a power sword / power hammer. Even considering the addition of a respirator and light carapace armor, it’s not even close. He goes from two of the best basic weapons to a meh, and trades a phenomenal melee monster for one that improves the opponent’s armor save.

Statline Comparison: Squats aren’t exactly known for their mobility, and a dismal 3” move is a liability for a character with a 6” aura and short range weapon. He gains 1 extra toughness, but that seems insufficient to offset the fact that most gangs are nearly twice as fast as him.

Skill Comparison: Both Ragnir and the buck average Ammo-Jack have the munitioneer skill. Ammo check rerolls are worth their weight in gold, especially if you are packing unstable or scarce weapons.

Special Rules: The Surplus Ammo skill allows Ragnir to deploy D3 ammo caches at the beginning of the game. This is… underwhelming, especially considering the added cost and gear downgrade. Caches could be interesting if you have gun support spread out across the map, but this it’s incredibly redundant considering his base skill.

Is Ragnir Gunnstein Worth It? Sadly, no. The vanilla Ammo-Jack is an absolute steal for 50 credits. Better reroll buffs on the field are interesting, but Ragnir doesn’t have the mobility or gear to really make effective use of them. Take a standard Ammo-Jack, enjoy the reroll 1’s for ammo checks, and hope that they can occasionally make an appearance on the table. That all said – his model is one of the best in the Necromunda range and you should absolutely buy one and run him as a standard jack.

Gear comparison: At twice the cost of a standard Rogue Doc, you’d hope that Doctor Arachnos came with some cool stuff. Well, sort of. A Rogue Doc comes with a laspistol or stub gun and a medicae kit. Arachnos leaves the medicae kit at home, and instead brings along a bio-scanner, mesh armor, and a respirator. You might think that not having the medicare kit stinks, but we’ll explain why it doesn’t when we talk about his special rules. Otherwise, Arachnos comes with mostly useful defensive equipment that will help him stay alive to keep patching up those gangers. Finally, Arachnos comes with a unique close combat weapon: medical mechadendrites, which are actually quite good! 3” Versatile is always useful, and the weapon has both a +1 to hit in short range (ie. base-to-base), and the Toxin trait, making Arachnos a threat to multi-wound models. Overall, Arachnos’ gear can be considered a significant upgrade over his Rogue Doc counterparts.

Statline Comparison: Arachnos gets a WS and BS bump (from 5+ to 4+), and Attack bump (from 1 to 2), a bump to Leadership and Cool (ok, fine, whatever), and an actual decrease in Intelligence. Huh. We guess Arachnos trades smarts for his willingness to fly in the face of convention, legality, and good taste. This is really too bad, because his Medical Mechadendrites rule procs off of his Intelligence, which we’ll get into in a bit. Overall, his minor stat buffs won’t really make him stand out from the other Rogue Docs. He’ll make more of an impact when it comes to close combat, but he certainly can’t be considered a combat monster.

Skill Comparison: This one’s easy! Rogue Docs and Arachnos all only have one skill: Medicae! Arachnos will get less use out of his Medicae skill than a Rogue Doc will, thanks to Arachnos’ special rules. 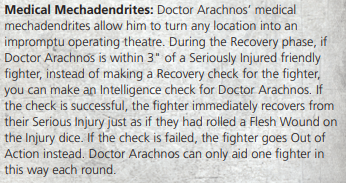 Now we’re getting to why you want Doctor Arachnos in your gang. His ability allows you to fully bypass Recovery and get a friendly fighter up on a 2d6 roll of 6+. That’s a successful result 72% of the time. The downside is that on a failure, that fighter goes Out of Action. If you’re looking for more upside, Arachnos can use this ability at 3”, and then give a hand with Recovery for a fighter within 1”, if you’ve got multiple fighters Seriously Injured. When it comes to battlefield triage, Doctor Arachnos really cannot be beat.

Is Doctor Arachnos Worth It? Short answer: Yes! Long answer: Rogue Docs are an integral part of any gang participating in a campaign. Unless you’re some sort of Necromunda savant, there will be times where you’ve got multiple fighters suffering from a Critical Injury. Rogue Docs are generally cheaper than having a Leader or Champ take one of your gangers to the Doc, and in case of multiples, having some medical backup on hand can be invaluable. Arachnos’ abilities and gear make him very useful on the battlefield. Handing out multiple injury mitigation rolls each End phase can turn the tide of a battle, and Arachnos is pretty handy in a fight, to boot. We’d say pick him up when you can, and watch him pick your fighters up in return!

Next WeeK: The Shootout

Where standard Hangers-On aren’t really welcome on the Battlefield, these unique, named Hangers-On have mostly earned their spot on the majority of rosters. Sadly, Ragnir Gunnstein, despite his awesome model, doesn’t make the cut, but just about any gang should be happy to bring Doctor Arachnos and Bigby Crumb along.

Well, Scummers, we hope you’ve enjoyed our foray into Hangers-On this week. If you have any questions or comments, please feel free to drop us a line at necromunday@goonhammer.com! We’d love to hear from you!

Make sure to come back next week, Scummers, because we are going to talk about one of Kevin and Dan’s favorite scenarios: the Shootout! It’s going to be a guns blazing, fast and furious, good time! We’ll see you then, and thanks for reading!