Howdy, Scummers! Games Workshop, in their infinite beneficence, has deigned to preview what’s coming down the pike for House Delaque in the upcoming Book of Shadows! Suffice to say, we’re pretty excited over here at Necromunday. Let’s check in with the staff and get some reactions from these jerks! 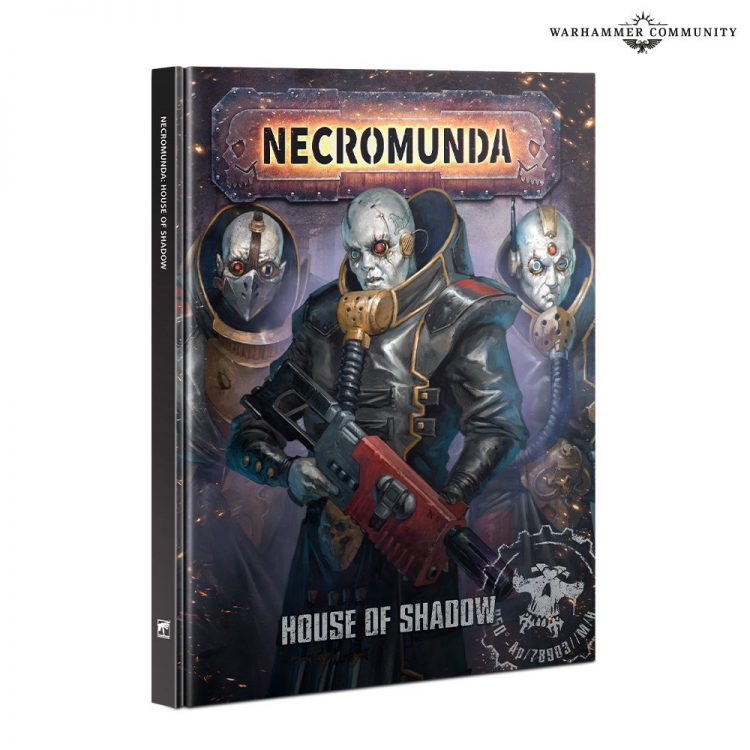 On Thursday, GW showed us a preview of the House of Shadow. First impression of the new toys Delaque is getting?

Fowler: It’s nice to see Delaque getting something completely out there. Cybersquid and the robot snakes look cool as hell. I like the idea of leaning into psychic shenanigans, and all of these models fit in with Delaque’s freaky vibe.

Dan: What are the Necro model designers smoking, and where can I get some?! These new Delaque models are completely wild and I am here for it. I don’t even play delaque, but these are some of the most interesting and fun takes on our favorite skirmish game so far. I mean, a flying brain squid? Hell yes. A while ago one of us called Delaque gangers “Matrix-cosplaying incels” or something like that, and I am thrilled that the designers are leaning into the Matrix stuff. 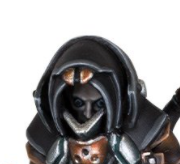 No one will enjoy painting this model. 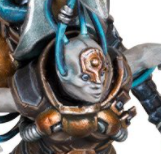 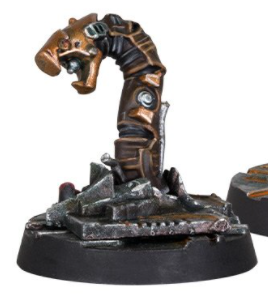 Dan: Is this what happens when one of those gag gift cans that are full of “snakes” gets haunted?

What were your favorite non-Necromunda reveals?

Genghis Cohen: I wasn’t that into any of the armies which had teased releases except Imperial Guard. But there I’m on the fence – new upgrades look pretty good, but I’d hoped for an upgrade of the dated Cadian kit, which presumably we’re not getting any time soon.

I am interested in the new Age of Sigmar edition – some friends got me into the game just recently, so it’s a good time to learn the rules.

Fowler: Sigmar is my favorite full army scale GW game. I highly recommend folks give it a shot.

Dan: I can’t help it, but I love me some Space Marines, and I’m really excited for the new factions in Aeronautica Imperialis. People have been getting at me for years to paint a Thunderhawk for my Raven Guard, and now I actually might go ahead and do it! And before someone runs off and tells on me to Greg, the Crab is cool, too.

Fowler: I recently started in on my first Titanicus models, and I’m really enjoying working in that scale. Definitely interested in the lil Thunderhawk.

SRM: The Gaunt’s Ghosts and Cadian upgrade sprues had me hooting and hollering. I’m happy to see Black Library characters represented on the tabletop, and I’m so happy that they’re finally fleshing out the Imperial Guard to be more diverse. It’s a big universe, and not everybody is gonna look like ol’ Pvt. Potatoface from the original kit. Beyond that, I’m here for tiny planes. Aeronautica is a wonderful game and more people should try it out.

With the preview this week, we’ve now seen the entirety of the prospect / specialist boxes (for now) in support of the core gangs. What do you think about the models we’re gotten in the “House Of” series as a whole?

Genghis Cohen: Whatever I was expecting when the ‘House of’ books were first announced, psychic robot squid was not it!

I think they’re great and really push the variety and scale of Necromunda beyond the ‘scumbags with autoguns’ power level of days gone by. I see plenty of criticism of this approach online, but ultimately it’s easier to leave the more extravagant models out, if playing a low-power, Lost Zone type campaign, than it is to invent new stuff. So fair play to GW for pushing the envelope and introducing new things. They give each Gang a real variety to how they play.

Fowler: We’ve been absolutely spoiled by the model releases in the “House Of” series. Dogs, cats, cyber squids, beefcakes, and dudes on hoverboards.

Dan: Each release gets wilder and wilder. The House of ____ books have been fantastic to give each gang some real flavor. One of the best things about current Necromunda is that each house does its own thing, and these recent releases have really reinforced that. As for the models, they’ve really ramped up, huh? Goliath, Escher, and Orlock got somewhat exaggerated versions of their core cast of characters. But then we get to Van Saar, Cawdor, and Delaque. Zealots, hover-boarders, and brain squids! They really went nuts with the model designs for the 2nd trio of gangs, and the only regret I have is that they didn’t go completely nuts with the 1st three gangs.

SRM: What I really loved right from the getgo with modern Necromunda was that the gangs were so strongly differentiated from each other. In old Necro, the main things differentiating each gang were available skills, not stats and entire armories of weapons like we have now. Each House of ____ book has only served to differentiate the gangs more and more, and from my experience there hasn’t been much in the way of power creep. I think AoS is the game where GW’s sculptors and writers really get to go buckwild with their ideas, but Necromunda isn’t too far behind.

There’s a big question mark on the Necromunda roadmap – what would you like to see in Q4 and beyond?

Fowler: The lore (and wonderfully detailed maps) in these books just keeps getting better. I’d love to see more settings – like Hive Arcos for Dark Uprising.

Genghis Cohen: I’d like to see some unified updates expansions for Cults (Genestealer and Chaos) as well as Enforcers. Otherwise they will end up rather behind the House gangs in variety and depth. If there’s one thing we’ve seen though, it’s that the designers can surprise us with fresh ideas, and it works well! So I’m optimistic about the future of Necromunda despite having no idea what it will look like.

Fowler: I’m certainly biased, but I am extremely on board with Cults getting the “House Of” treatment and new toys. The sheer variety of new playstyles these books bring is pretty staggering. When it comes to gang builds, more options is always excellent.

Dan: As boring as it may seem, I’d like to see some new rulebooks! The House of ___ books have done a great job consolidating the rules for individual gangs, but I’d like to see some consolidation and updates in the rules, scenarios, and campaign stuff departments. Necromunda is still a vast ruleset, and the game wou;d be a lot more accessible with a little bit of housecleaning. After that, I’d love to have a new campaign to try out.

SRM: More weirdos! The new takes on the house gangs have been fantastic, but I love when the sculptors really cut loose and give us something weird and wild like the Water Guilders or Mercator Sanguis guys. Pit slaves, scumbags, deprecated servitors, critters and mutants are what I’d like to see next. They can really lend the world more texture by filling in the margins of the setting. I’m not expecting a House of Dirtbags book exactly, but I’m always happy to see more weird dipshits.

Do any of you have a clue to what these new models actually do?

Dan: The great thing about this Delaque release is that I have no idea what any of this wacky stuff actually does. What the hell is a “psychoteric wyrm”? Why does it have so many belts? Who thought it was a good idea to bring a snake to a gun fight? Those milk-pale basement dwellers over at House Delaque have been really leaning into the weirder aspects of their house, and that’s a good thing. I wonder if having such obvious psychic phenomena is bad thing, though? Wouldn’t prospects running around shooting mind bullets and talking to their pet snakes raise some questions with the local constabulary?

What bargain webstore did that one guy get his katana from? 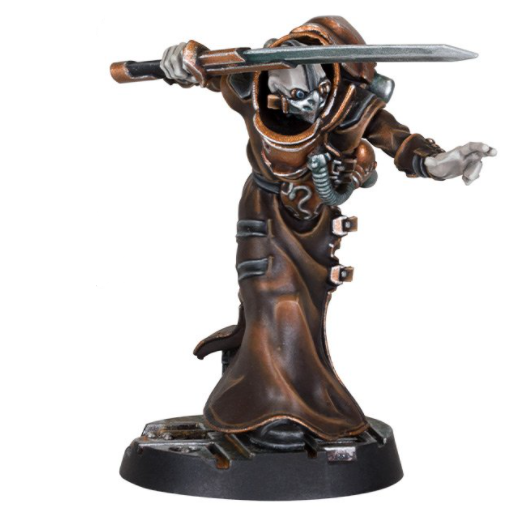 Dan: I’m sure that some of you readers out there own a katana. I know that at least one Goonhammer editor owns a katana. Now you can have your very own wannabe sword saint in Necromunda! Look, he’s even doing the “sword hand” thing with his off hand! Adorable!

Fowler: While you were getting -1 BS markers at the Drinking Hole, he was studying the blade.

SRM: House Orlock always seemed more like the kind of gangers who would shop from the BudK Knife Catalog, but this dude’s Mall Samurai energy is strong.

Hired Gun is technically Necromunda, so we’re gonna talk about it.

Dan: I’m not a big shooter guy, so I was not very excited about Hired Gun, until I saw that Ambot stop to tunnel itself away from the character in the Hired Gun trailer. Something about that made me pretty excited to pick up this game. Here’s hoping that it acts as a gateway drug for Necromunda.

Fowler: The latest trailer is giving me major Titanfall vibes and I am absolutely here for it. I know some folks are reticent about a Necro game that centers on one person wrecking shop… but also Kal Jericho exists.

SRM: I’m getting a lot more Doom 2016 energy from this one, right down to its soundtrack (https://www.youtube.com/watch?v=eX1eoTl_YJ8&ab_channel=FocusHomeCommunity) and that is absolutely not a bad thing. I don’t want to get too excited as Warhammer video games don’t exactly have a stellar track record, but this one’s lookin pretty dang good. “Necromunda-themed take on Doom with a dog” is a pretty fuckin good sell if you ask me.

Thanks for stopping by, Scummers! Come back next week for some more Necromunda fun! Be well!