Necromunday: White Dwarf 459 Review – Going Out With A Bang 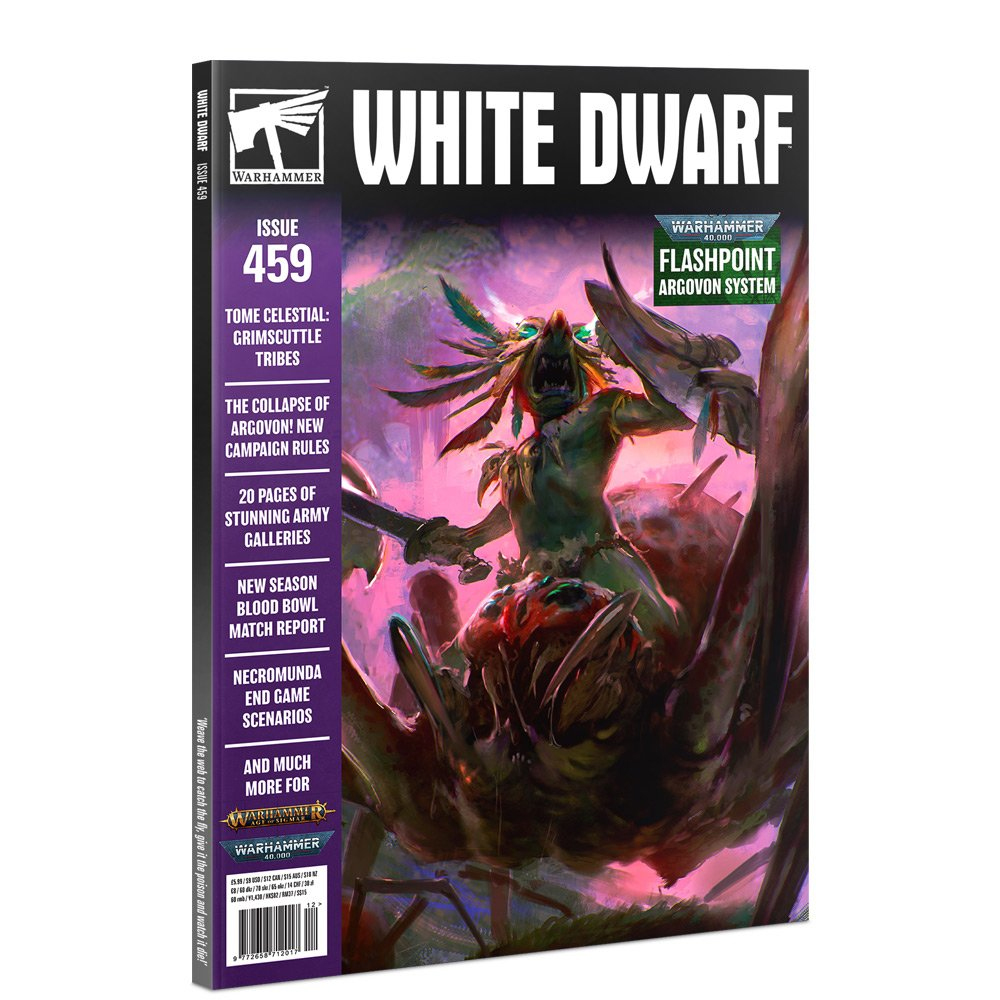 Welcome back, Scummers, to another edition of Necromunday! This week, we’re taking a look at the brand-new end-of-campaign scenarios you can find in White Dwarf 459. Every good campaign deserves a worthy send-off, and it’s worth planning for how your campaign will end. Let’s take a look at what GW has served up this month and whether it’s worth implementing.

Be still our hearts: Necromunda has received big write-ups in two consecutive issues of White Dwarf! On the heels of last month’s collection of Brutes, the December issue covers the subject of final showdowns. You can still buy a physical copy of the issue at the Games Workshop site, as well as an eBook version from Warhammer Digital.

What is the proper finale for a Necromunda campaign? An ambush at the local watering hole? A desperate scramble for freedom? A stand-off in a hive sector under blackout? Let’s talk about ending things.

The End Is Nigh

Endgame scenarios are pretty unique in Necromunda. Things change a bit when there’s no “next time” to think about and suddenly your gang full of clueless dinguses is playing for all the marbles. Even if the top spot in the campaign is spoken for, there is some delicious schadenfreude in playing spoiler and messing with the front runner’s chances. In some cases, multiple gangs have a shot at infamy, and may all start the finale with an equal chance to win  In this month’s White Dwarf they present three unique endgame scenarios designed to act as big multiplayer closing acts for a campaign that can either be a last chance to snatch glory for some gangs or just add a bloody punctuation mark on the end of a season of violent underhive warfare. All of these scenarios below are very likely to… well, let’s say “decrease the surplus population,” so having them be fun and flavorful is key.

Note that these are all multiplayer scenarios, and whether you’re planning to run these or build your own, you should consider checking out our Multiplayer Scenario Guide for more info about wrangling multiple gangs on the table at once.

Arbitrator PROTIP: Don’t be afraid to add to the chaos or tip the scales. Endgame missions are all about giving your players a memorable end to the campaign! There is generally little balance involved in these missions and that is definitely OK.

Ganger PROTIP: If you find yourself in a multiplayer scenario going up against a strong gang or arbitrator force, try not to be the first to shoot gangs that are theoretically on your side. Early double crosses can turn into a slog while you sit through multiple FULL gangs taking pot shots at each other, leaving the meager remains of the “victorious” gang to get shredded by the scenario’s big bads. Save it for the Arbites, or that ganger who is just about to run off of the table. Related: Can someone send this message back in time to Past Fowler about 13 months ago? 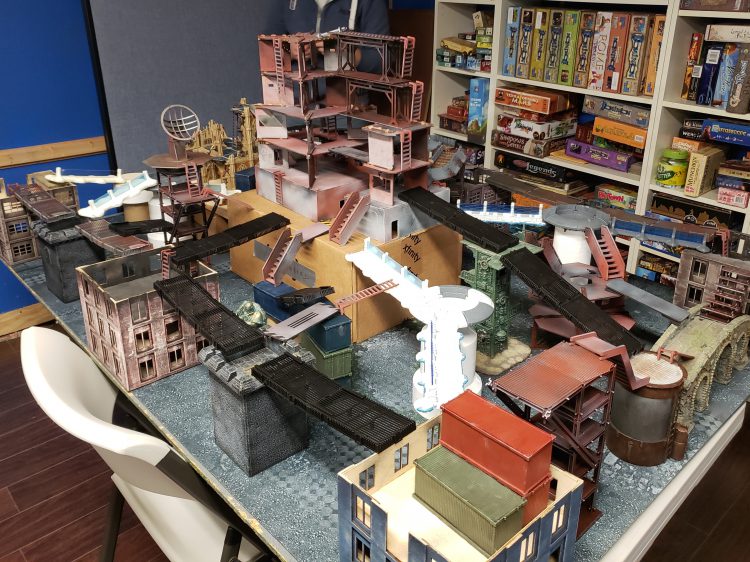 A 6-player, full gang game on a board like this will take a while. Credit: Fowler

Scenario 1: The Last Round

After a long campaign, the “victorious” gang heads to their favorite watering hole for a well deserved drink, only to be ambushed by a rival gang (or ideally, gangs!).

Here at Necromunday HQ, we love barfight scenarios. This one puts the top gang in the center of the mayhem, with only some overturned bar furniture shielding them from the combined might of the other crews.

As the article suggests, this mission makes difficulty tweaks pretty simple. If the defending gang is miles ahead of everyone else – give the attackers more resources or bodies on the table. If things need to be evened out, the defending gang could get a boost from a friendly bouncer or other ally. Feel free to give the defender a bit more to hide behind, but we definitely like the idea of letting gangs settle the score with the big bad before turning on each other.

If you hit the end of the campaign and one of the gangs is far ahead of the pack, this mission will put them through the meat grinder. It’s Last Stand taken to the extreme – perfect if the top gang has played heel and given the rest of the players a reason to beat them to a pulp. This one has potential to be an absolute mess and we are psyched to try it out. It’s also a great excuse to model some custom terrain for your gangs to fight over. 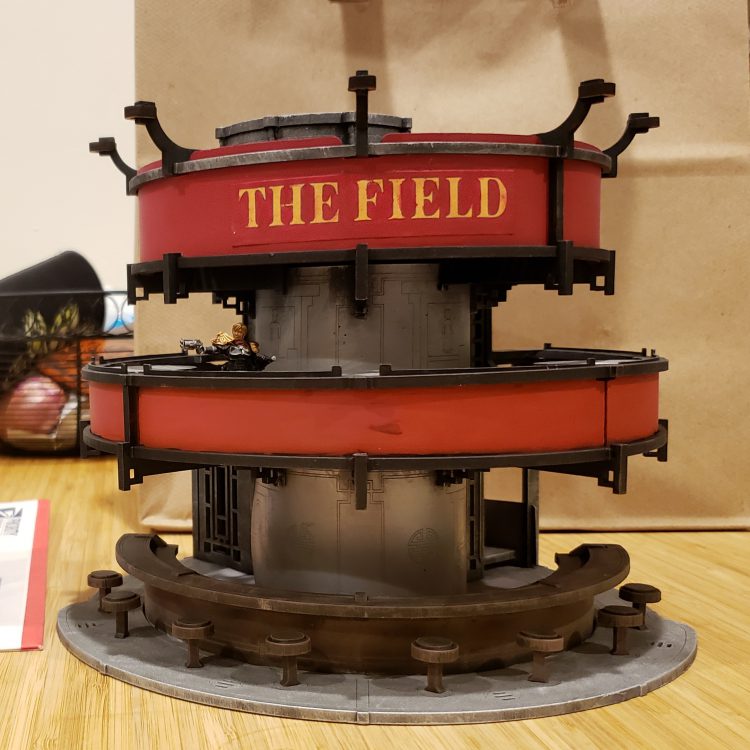 Consider your real life watering hole if you are making custom terrain for this one. RIP The Field. Credit: Fowler

What a lovely day! Gangs attempt to flee into the wastes, facing adversaries and inclement weather along the way.

We like the suggestion of having this be a multiple gangs vs arbitrator showdown. As the escape mechanic is a bit difficult, leave plenty of time open to play this one! The decreasing Ash Storm visibility will make later rounds even more panicked.

I am a huge fan of multiplayer “escape the board” scenarios, and the combination of the knockback mechanic & progressively lower Ash Storm Visibility combine to make this one incredibly chaotic. Expect a large pile of gangers 6” from the Ash Gate, and myriad injury table rolls. 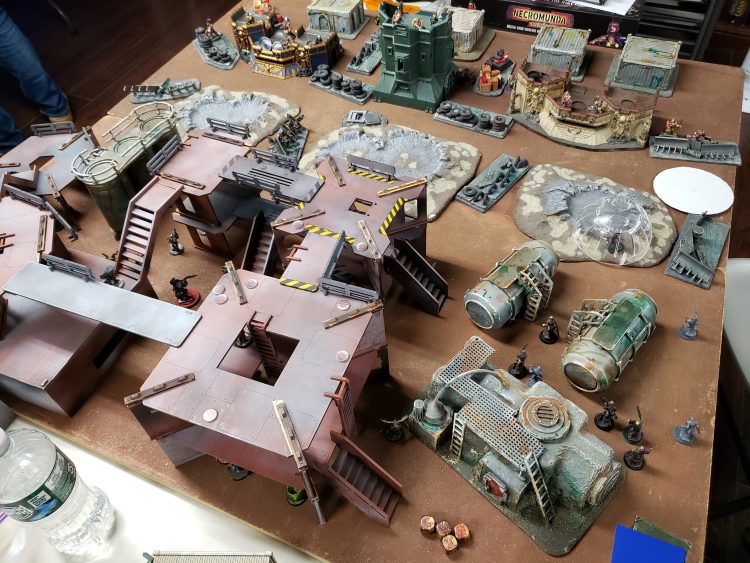 Congratulations for moving up 18 inches with no cover. The reward is a Goliath in your face. Credit: Fowler

Hoo boy, The Long Night is going to decimate any gangs involved. If you aren’t running this mission as a downsizing exercise, consider giving your fighters additional ways to avoid monsters or cold damage. More than any of the other scenarios, this one is likely to end your campaign with a high body count.

This one is all about pure survival, but unfortunately it takes a fair amount of agency away from the players. The main sources of damage and OOA’s in this mission are likely to be failed toughness checks and RNG monster hits. If your campaign crew is down for a “rocks fall” type of mission this could be worth a look, but there are plenty of other options out there for finales.

What better way to say goodbye to a campaign than with a multiplayer bloodbath? We think that the White Dwarf 459 missions (particularly The Last Round) are a smashing way to ascend to Underhive infamy. Do you have a homebrewed campaign ender you’d like to share? Pictures from a particularly brutal Last Stand? Drop us a like at contact@necromunday.com. Hit us up! And stay tuned for a future article where we discuss how to end a campaign with style and ideas for designing your own endgame scenarios.

Next year we’ll be back with a feature about our favorite underhive fabricator 40kHamslam’s incredible Necro table.