In New Year New Armies Lupe attempts to go from a Warhammer Zero with no playable forces for any mainline Games Workshop game, to a Warhammer Hero with an army for each of Warhammer 40,000, Age of Sigmar, and Middle Earth Strategy Battle Game and some games under his belt to (re)learn the rules.

The Malifean 6th are my Warhammer 40,000 project for this mad dash I’m making into 2022, where I try to assemble, paint and play with an army from each of the three mainline games that Games Workshop makes. I chose the Astra Militarum as my army on the basis that:

I wanted to do three things to prepare for getting my Malifean 6th project underway: create some lore for the regiment; design a rough list at 2000pts to work towards; and create a paint scheme for tanks and infantry that suits my sensibilities and is easily replicable across a lot of models.

On the planet of Malifeus war is an ever-present looming threat, but rarely an immediately personal one. Positioned in a strategically important location close to a Space Marine Chapter Homeworld, Malifeus is an advanced industrial world with no immediate and direct risk of invasion. The presence of the Crimson Guardians chapter and their defences means that the major military application of the Malifean regiments are as supporting troops for Astartes offensives and patrols. In order to work better with the superhuman might of the marines, they are highly trained and well equipped, specialising in mechanised warfare and rapid insertion tactics. Though massed infantry formations aren’t unknown to the planet, they are much rarer than in other places. Most platoons are mechanised, ready to redeploy at speed, and support large formations of tanks including a huge number of the Leman Russ main battle tank.

The overall fluff for the world that provides the Malifean 6th you can read above: an industrial world whose military tends to support the local space marine chapter (I may even paint a few marines at some point in the future, who knows), and leans towards armoured columns and mechanised infantry over footslogging and massed warfare. I liked this as a general theme, as a more professional and regimented armed force than some guard regiments, but I wanted something to pick the 6th regiment out from the crowd in particular.

I have quite a few World War 2 armies, and historical militaries are going to be a big influence on these minis. As such I started looking how armoured divisions and mechanised units worked in the second world war and what their culture was. In particular I was taken by the many evocative nicknames that they accrued for their particular fighting styles, and settled on “The Hellriders” for the 6th. This would be down to their tendency to prefer plasma weaponry, which also gives me a nice opportunity to paint plasma coils, something I enjoy a lot. I would include a plasma gun in each infantry squad, and give the tank commander in the tank platoon a plasma cannon as the main turret weapon.

The Hellriders, then, are particularly aggressive and vicious even for Astra Militarum units, and known for their extensive use of plasma weaponry. As such they’ve gained a reputation for being excellent enemy armour hunters, moving in fast and flexible formations that can take down enemy vehicles and armoured infantry with ease. They’re a valuable support for the Vermillion Knights in their increasing clashes with the Necrons that are emerging from a nearby tombworld. When working with them they often provide the Hammer to the Astartes’ Anvil. The Vermillion Knights dig into a position and hold the line against the enemy while the Hellriders encircle them and then strike from the rear at great speed.

For the army I was going to build I wanted to lean into this fluff that I had created: a fast moving and heavy hitting force that was built around armoured vehicles. I also wanted, because I’m a history nerd, to roughly reflect reasonable real world fighting formations. As such I decided that my list would be made up of three main parts: a medium tank platoon; a mechanised infantry platoon; and a heavy tank support.

The medium tank platoon would be made up of Leman Russes (of course). Though in 40k they’re described as heavy tanks or Main Battle Tanks, they’re just not from a military history perspective – they much better fit the operational role of a medium tank as used in WW2. As such I decided I would deploy them in formation similar to British tank platoons of the time: four tanks, with the tank commander in an up-gunned version of the same tank. In the Second World War this was a Sherman Firefly VC, but in my force it’ll be a Leman Russ Executioner to lean into the plasma focus of the regiment. The others will be the standard Leman Russ as stand-ins for the Sherman Vs that the British would have used.

The Mechanised Infantry Platoon would follow a pretty standard format for such units in history: a company commander, command squad and three infantry squads mounted in four Chimera APCs. The command squad would be fully fitted out with a veteran plasma gunner, medic, vox-caster and standard bearer, with each squad featuring a plasma gunner and vox. I’m told by the more competitive-minded folks here that putting these upgrades on these units is obviously a mistake but having a radio network for my fast-moving rapid response platoon is just good sense and I refuse to be moved on this matter. At the moment I’m not planning on adding a heavy weapon to each of these squads, as they can’t take plasma cannons and I’m nothing if not laser-focused on a theme. I may add a psyker or other character into the command Chimera if points allow, we’ll see how it looks when the army is together.

Finally I wanted to add some serious heavy armour support. It wasn’t unusual for a heavy tank to be attached to an armoured task force like this, often a single Churchill tank for British forces. And what’s the obvious 40k counterpart to a Churchill heavy tank? A baneblade of course.

Truly, I am an idiot.

Quickly throwing all these things into a list suggests its about 1800pts, so I grabbed a sentinel as a scout component of the mechanised infantry, and then I’ll add in some characters or another sentinel when I approach the finishing line.

For my first goal however I’m going to focus on getting a 50PL Crusade List ready to go so I can get some games in as soon as possible: A tank commander and two russes, a couple of infantry squads and a platoon commander, and a couple of chimera to carry them. That, it turns out, is all you get for 50PL!

I Want to Paint it Black

Let me admit something to you: I love 40k armies that have black paint schemes. God they look good. So cool. But also, absolutely hateful to paint. Black and white are notoriously the worst colours to paint whole armies, so I can’t do that to myself. I wanted to find, therefore, a scheme that felt like it was black without actually being black. After some experimentation I settled on three near-black colours:

Let’s start with a tank, because everyone loves tanks. 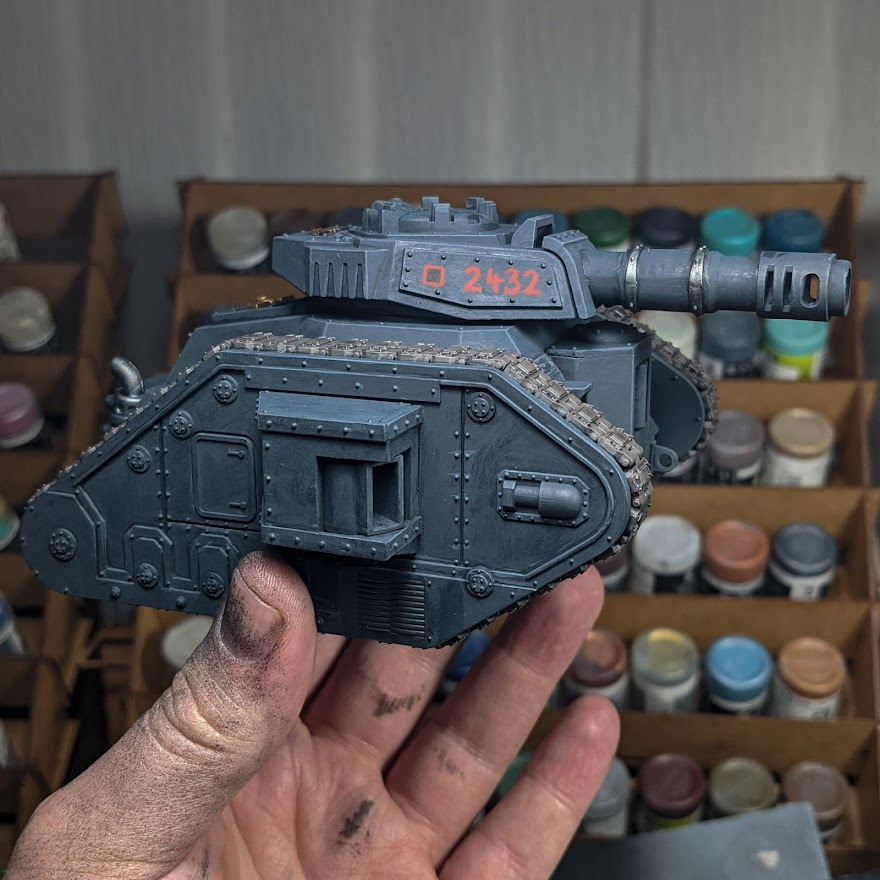 You can leave it here if you want a nice clean look, but if you want something more weathered (like I do) then you can move on to the weathering stages:

Now onto the infantry. My goal here was to create a scheme that looks good but that is extremely quick and easy to do. I quickly found that the Black Leather I used on the vehicles was too bright, so I subbed it out for Vallejo German Grey. Here’s the scheme I went with: 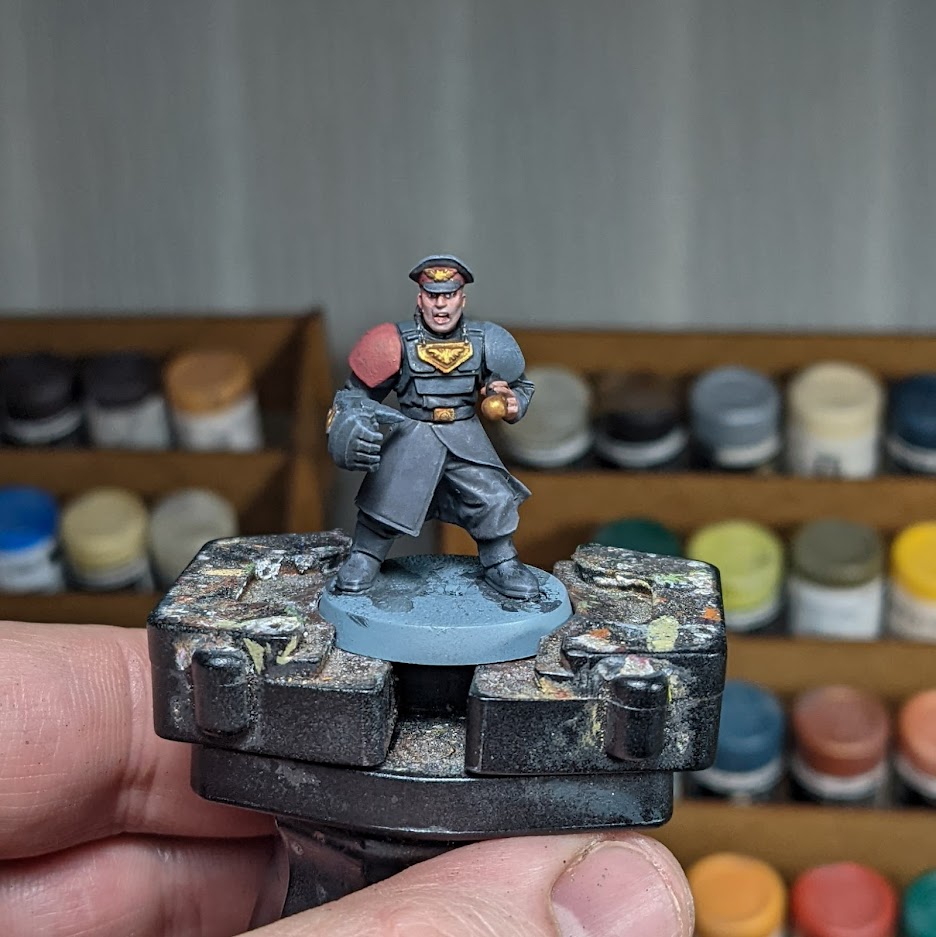 And that’s it! With my paint schemes ready, it was time for me to get cracking on building and painting my starting crusade force. Next time I’ll be diving into Middle Earth and seeing what it’s like to try and build an army for that game.