Welcome back to Lupe’s ongoing hobby progress log, taking him through multiple games and armies. If you missed the prior articles in the series, you can find them here:

One of the things that I sometimes hear from people who read Goonhammer is that they really find the hobby progress and standard of our contributors inspiring. That’s a nice thing to hear, though I don’t imagine anyone who writes here imagines they’re anywhere near the top of the pile in terms of quality of output. But it does also create a somewhat unrealistic standard in hobbyists – we’ve all been doing this a (horrifyingly) long time, we’ve all worked hard to get our hobby game on point, and most importantly we only talk about our successes.

Each month we do a hobby round up and it’s always a wall of awesome hobby stuff. Cool models and exciting projects and nice progress. But that’s only one part of the story, and what we don’t post (because it doesn’t really count as “progress”) are all the projects we try again and again at, stumble up against, or ultimately abandon.

This is something that happens to every hobbyist, and it’s something I’ve seen people become dispirited by, especially as hobby progress has gone online. Social media is packed full of talented people outputting huge amounts of cool shit, and it’s very easy to come to the conclusion that you’re the only person who struggles to get units done, or who sometimes just ends up defeated by a project.

When I started the New Year New Armies project I was flush with enthusiasm, and to some extent I still am. I’m thrilled with my MESBG and 40k armies I’ve gotten together in this, and I fully plan on continuing to expand my hobby there, and convert it into actually playing some games for the army I haven’t managed to get to table yet (I’m looking at you, Imperial Guard who suck so bad all my prospective opponents have looked worried about upsetting me if we get a game). I was also super pumped for the third army in my list, the Devoted of Rot, a Maggotkin army for Age of Sigmar. I even got an amazing birthday gift of a big box to get me started.

Hints of what’s to come

“Fuck me,” I thought, “these models take a long time to paint”. I started with what I always do, getting a test model down so I could be happy with my scheme. I hit upon what I wanted to do with the guard and dunharrow armies pretty fast – I’ve been doing this a long time, and I generally have a good sense of what will work well in advance. But with the maggotkin it was different. My first attempt just… didn’t come out how I wanted. Rust and grime and horrifying stuff is one of my favourite things to paint, so I decided to lean into rusty metal and pale flesh with gruesome infections and when I put it all together it just… didn’t look great to my eyes.

So I slept on it and came back and decided to change up the armour to green to give it a bit more variation on the model. That certainly helped and people made positive noises to the scheme when I posted it to my groups. I should have felt good about that, but it still didn’t sit right with me somehow. 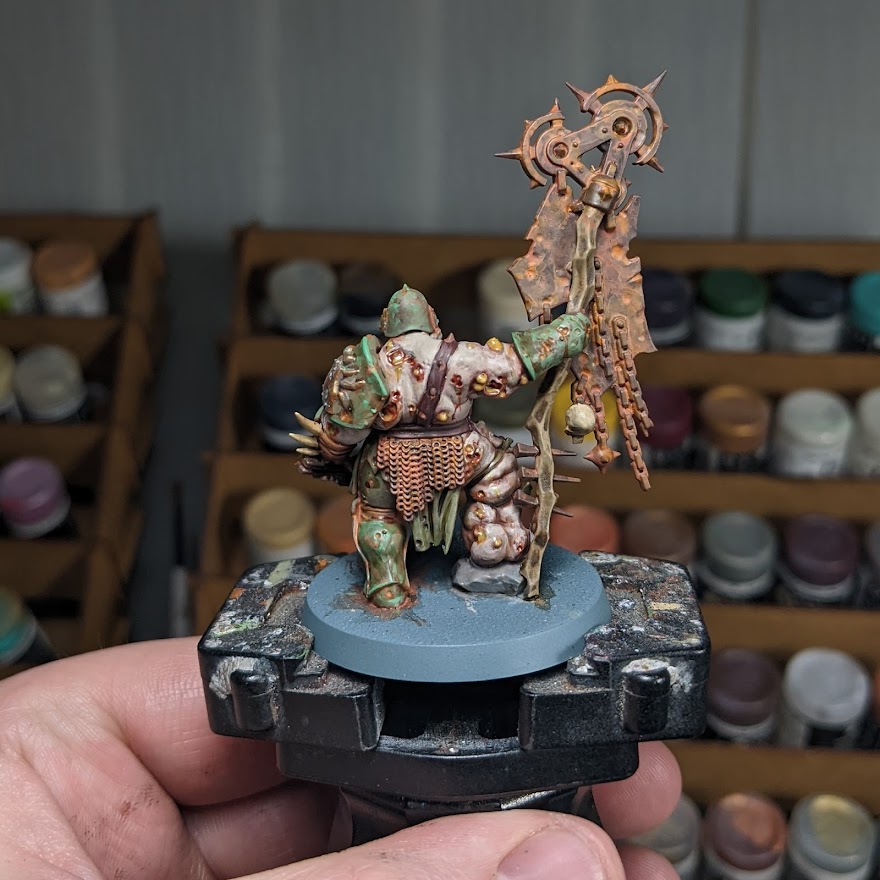 I considered stripping the model and trying a different approach, and decided I should instead press on and paint some poxwalkers instead to see how I felt about those. This was definitely better. I enjoyed these more. 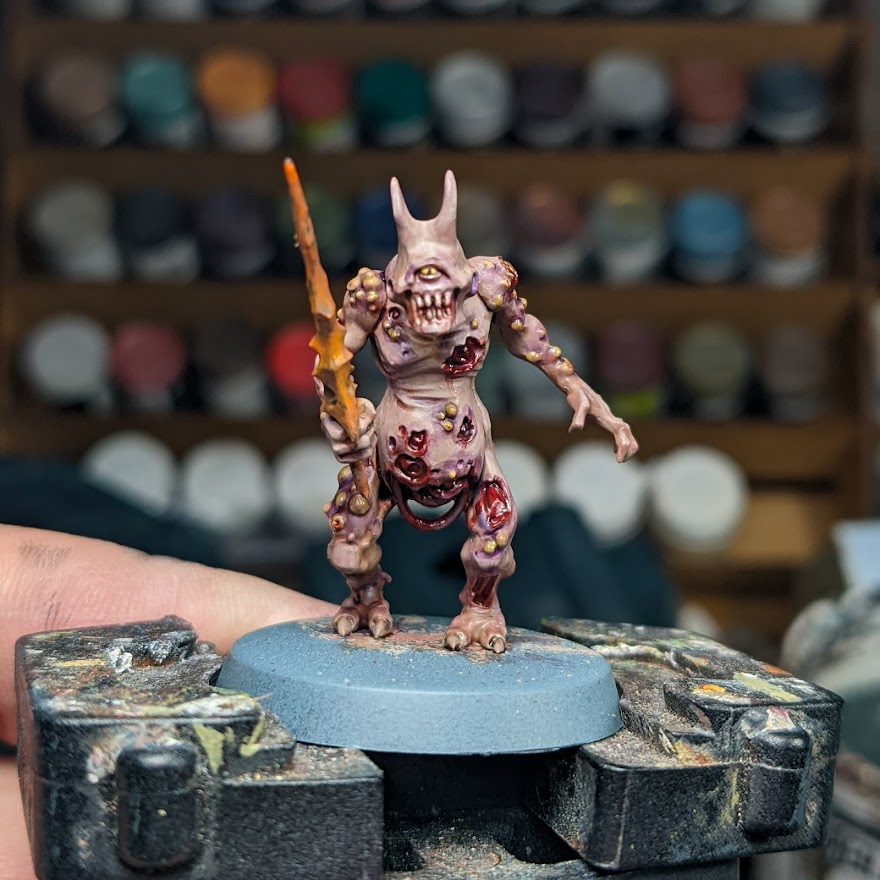 But then I remembered I had ten of the suckers to paint and my heart sunk a bit. I hadn’t felt like this about the other armies, but now the idea of getting a group of models done felt overwhelming. Maybe I’d made the scheme too complex? I tried to assess my method and I’d experiment with some different approaches as I painted up the other 9, but it never really clicked for me. I ended up with a decent looking unit that I felt deeply uninspired by. I couldn’t explain it – I love nurgle and these models, I just wasn’t happy with how I was painting them. 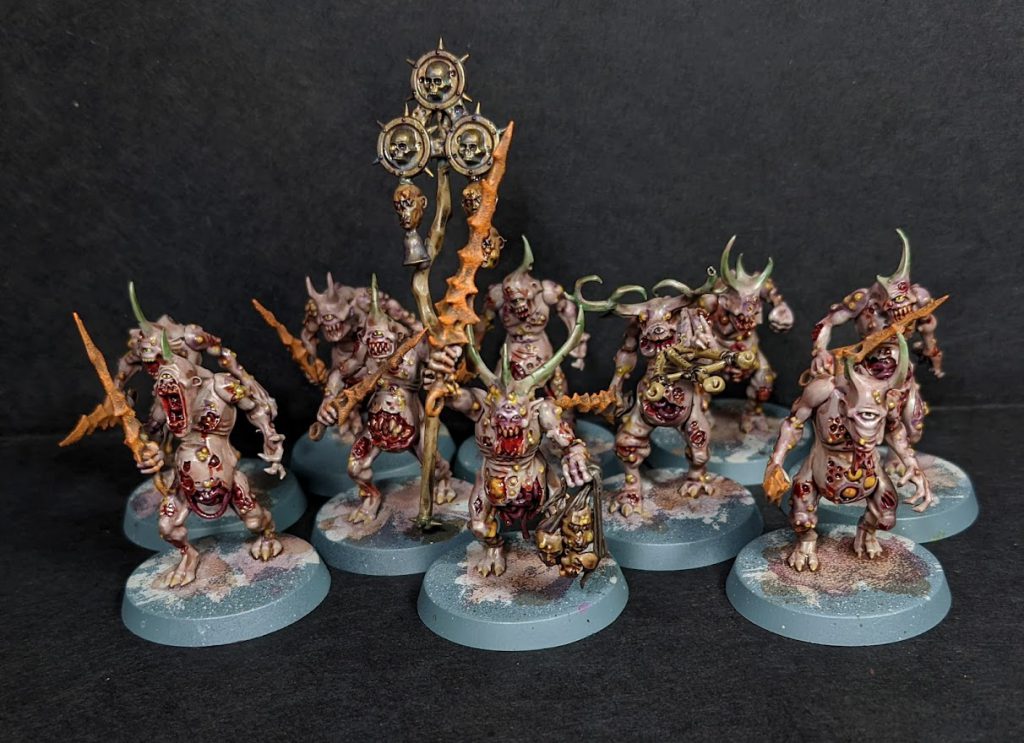 But I was painting these models in part to write this article. I do that at times to keep me going when I’m getting fatigue on a project, but what was dispiriting here was that I wasn’t burning out on this project, I just wasn’t getting into it. I wasn’t setting myself a public goal to push myself to finish, I was using my public goal to do it at all. But no matter, I said I would paint these and damn it, I’m going to. Big chonky lads 2 and 3 came together a little faster, but I was no happier. 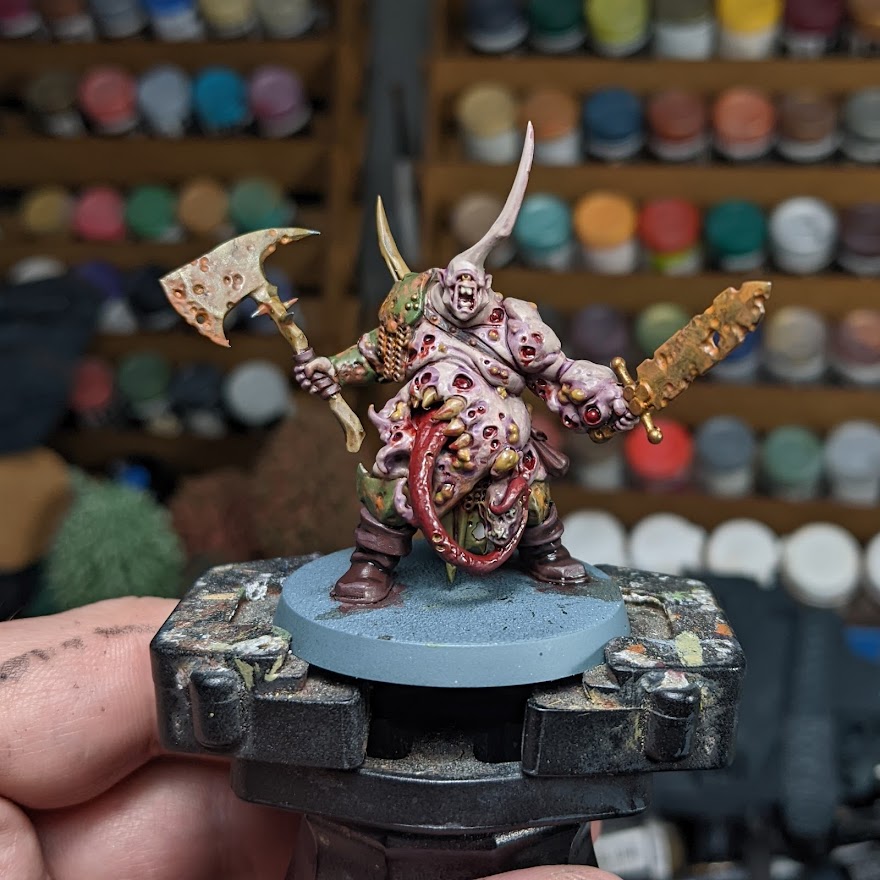 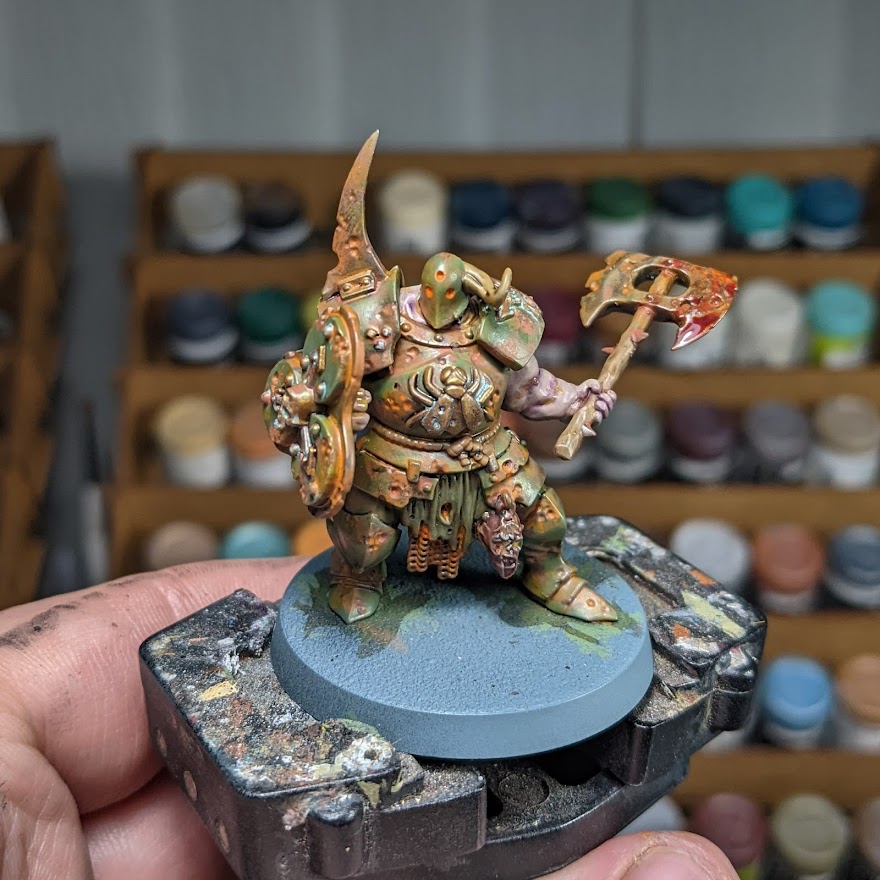 These aren’t the best models I’ve ever painted, and that’s fine. Not everything you do has to be the best thing you’ve ever painted. I’ve got lots of models that I love that I look at and see how I could have improved my methods or spent more time or picked a slightly different scheme. But I wasn’t happy with these models, and I honestly still don’t know why. They look fine. People were complimentary of them. I was making lists and getting excited about playing them.

I found myself picking up other models. Starting an opposition force for MESBG. Going back to my 10mm bullshit. Anything to avoid painting more nurgle. I decided to put them in pride of place on my desk, in the big box they came in, just off to one side so when I sat down they’d be there and I’d remember to paint them.

They’ve sat there ever since.

One of the truths of our hobby, heck one of the truths of art (and yes I consider what we all do to be art of a kind, and anyone who doesn’t think it is hasn’t been to enough shitty student art fairs to compare and contrast the quality), is that sometimes it just doesn’t work. It can all be good on paper, and seem like it should come together, and you can have motivation and inspiration and it still doesn’t work.

The hardest part of this truth is accepting that it means that sometimes you should give up. We do this because we’re supposed to enjoy it, after all. If you’re not having fun, it’s ok to quit.

So I quit. The Maggotkin are going to be packed up in a box and gifted to someone who’ll appreciate them more than me. I hope they have a better, horrifying, existence with a future owner. And if they strip all my paint off and start again, that’s also fine – I don’t paint, I don’t do this hobby, to race towards a goal. But I hope they make someone else happier than they made me.

Don’t worry, that doesn’t mean I’ve given up on this dumb, idiotic, pointless crusade. It doesn’t mean we’re stripping back to armies in just two systems. It just means I’m going to be an even stupider, bigger, idiot.

I’ve started painting Alpha Legion for Horus Heresy. I’ll fill you in on that next time. 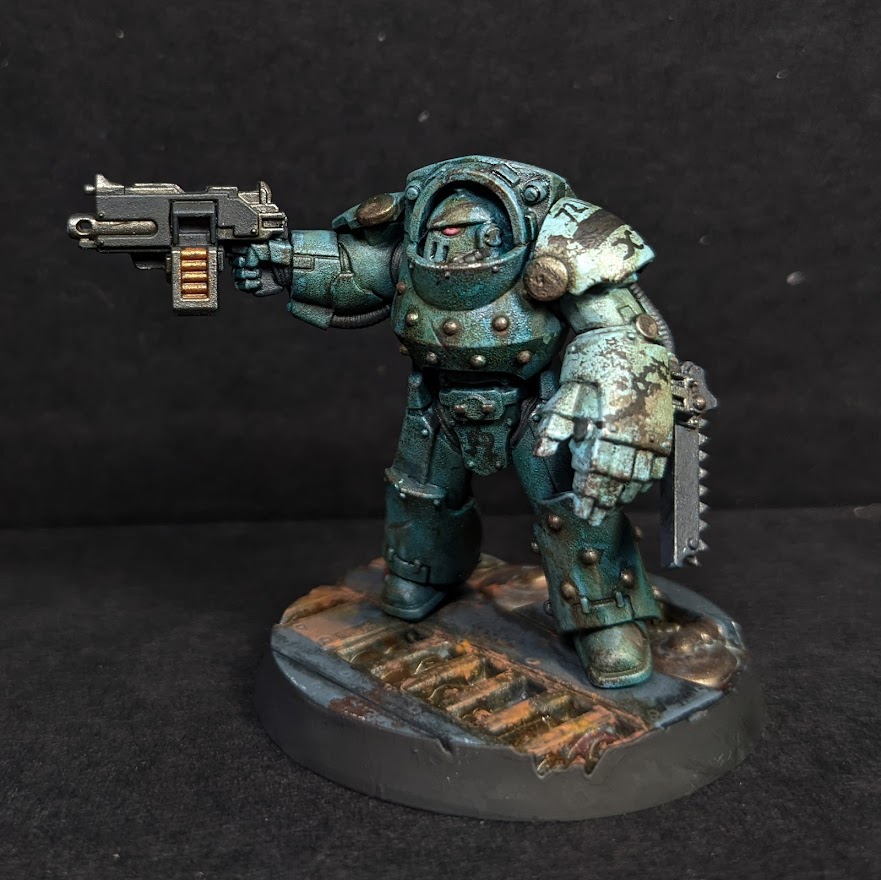