No Painting Needed – TinkerTurf Terrain Fills out a Table Quickly 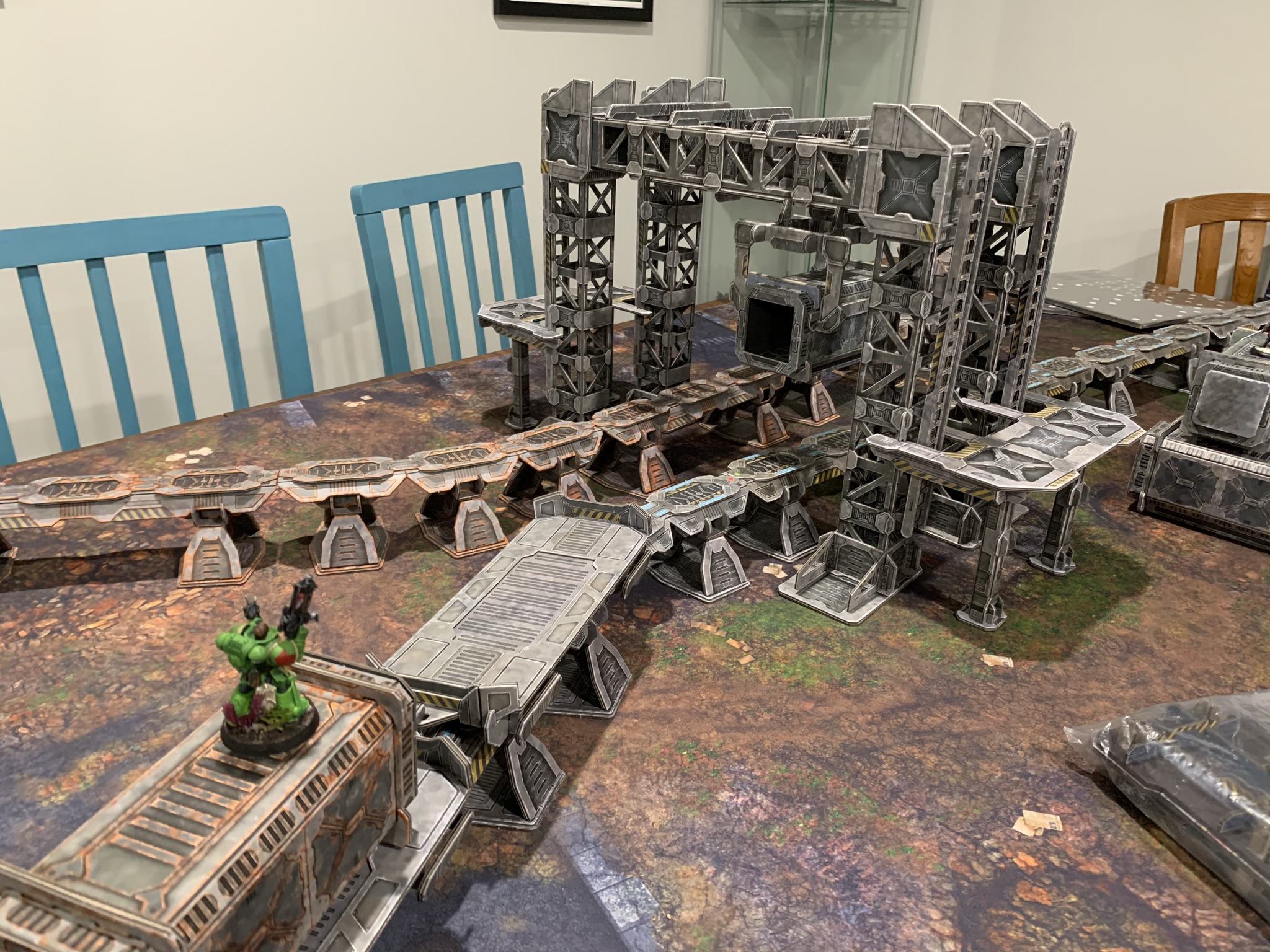 Like many of us, the folks behind TinkerTurf were tired of using books and soda cans as the battlegrounds fought over by their wonderfully painted miniatures. Also like many of us, sitting down to a terrain project never made it to the top of the worklist. While there have never been more options for gamers—mdf, papercraft, and plastic are everywhere—nothing quite met their desire for terrain that was sturdy, looked great, and required minimal building. When they decided to make their own they looked to an unlikely inspiration: board games.

TinkerTurf terrain is made from thick chip board, which is a dense cardboard used to make board game chits and counters. Like MDF solutions, it comes pre-cut on a sheet for you to pop out and glue together. Unlike MDF it can be printed with full-color art on both sides. Tinker House Games partners with Panda Manufacturing; if you own any modern hobby board games you almost certainly own something they’ve made.

I’ve been using this stuff for a couple years now, primarily for Kill Team. The set produced for the first Kickstarter had a lot of verticality and platforms, though was light on Line of Sight blocking. Now that their 2nd set is on Kickstarter I wanted to share my impressions. The new set (which I’ve already backed) features another major set piece and adds walls with doors and gates; great for 40k and perfect for Necronmunda.

TinkerTurf terrain comes printed on square chip board sheets that have been die cut. Again, if you own any board games you’ve seen this before. They punch out cleanly and are numbered to make assembly easier. Many pieces are also glued together and the art is designed to make it clear where you want to put the glue.

As you can see, once this is glued together there is a little 3D effect to the piece; it doesn’t add anything functionally but it adds some visual interest. Gluing is easy, though they recommend picking up some plastic 1″ clamps to hold pieces together as they dry.

Overall assembly is easy, though certainly takes a lot longer than building plastic terrain. Typically you’re sandwiching some pieces together then assembling them into bigger pieces. Cover and platforms go together pretty easily, but something more complex like the Mag-Lev crane will take longer and has some tricky spots where you’re going to want to test fit and ensure you have oriented properly.

Once assembled this stuff is pretty sturdy. As you can see the large pieces can hold the weight of larger ships and has no problem with individual units.

While I’m not going to let it get wet any time soon, it’s also held up just fine to the use of a couple kids under 5. My boys have put all kinds of stuff—from Hot Wheels to heavy wooden play food pieces—all over this while my back is turned. So far there haven’t been any issues.

The Mag-Lev Crane is the only part of this first set that has specific set-up instructions. It’s made up of 2 support structures, a crane rail, and the crane itself. I store them separately but most of this could be glued down if you wanted to.

Everything else is modular. The platforms are supported by legs and there are leg connectors to allow you to build the platforms as high as you need to. It’s designed to line up with the Crane Platforms, and there are catwalks, ladders, and stairs galore to help you set things up how ever you want. With enough pieces you can set up dense Necromunda or Kill Team boards.

One of my favorite things about TinkerTurf is how various pieces move; this is great for narrative scenarios. The Crane can carry the container pieces in it and it can move along the rail. I’ve played games of Kill Team where one player is trying to load containers on the train which then drives off the map over a few turns. I’ve also squashed a Plague Marine or two underneath a dropped container.

The first expansion set of TinkerTurf terrain is now available on Kickstarter. This set is fully compatible with existing sets and add much-desired Line of Sight blocking in the way of walls, doors, and gates.

Like the first campaign, this one includes a major centerpiece to fight over. The SatComm dish can be repositioned as needed for narrative missions, and a recently unlocked stretch goal adds adjustable platforms. These will line up with existing platforms or you can use one as an elevator.

Continuing with pieces that you can interact with, the walls include doors and gates that can be opened or closed as needed for your game. I love this for Necromunda in particular, but in general I’m pumped about the narrative scenarios. Setting things up so MagLev cars are flowing in and out of a compound while you’re dealing with a siege sounds good to me.

I’m a big fan of this stuff. While TinkerTurf did send me prototype pieces before the launch of their first campaign, I immediately jumped into the Kickstarter myself and loaded up on terrain. At the time I was focused on Kill Team but the worn down look also fits stuff like Gaslands. Once you get the hang of building it’s pretty easy to throw on a movie and power through the gluing process. It can get pretty mindless, especially if you’re doing a number of sets at the same time, but since you don’t have to paint anything when you’re done its well worth the time.

As far as cons, there isn’t much modularity in any of the pieces you assemble. With the exception of the Containers which offer open and closed options, everything goes together in just one way and cardboard isn’t as easy to kitbash as plastic. Also, depending on your storage availability you may have to break down elements like the crane and track which will add to the set-up time when you’re building a table. These are more quibbles than complaints, however. I wanted easy and I got easy. The only other complaint I have was the lack of good LOS blockers but obviously the new campaign takes care of that.

Buried in my basement is a big box of plastic terrain in various states of assembly. It’s been there for a couple years languishing at the end of the backlog. Oh sure, I intend to paint it as soon as I finish painting everything else I own and Games Workshop stops producing new games. Until then I’m all in on TinkerTurf. I love this stuff. I backed the 2.1 campaign at launch and am excited about their upcoming Urban Warfare and Fantasy Sets.

Original sets are available on the Tinker House Games webstore. As of writing, the 2.1 Kickstarter has already funded with about 10 days remaining in the campaign.