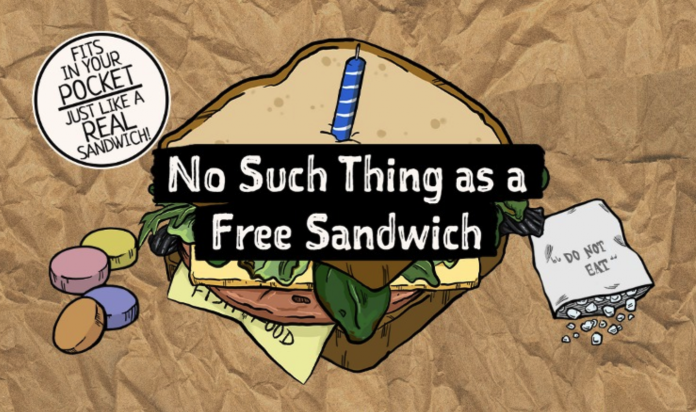 The adage “there’s no such thing as a free lunch” emerged in the 1930’s through the regular practice of bars and saloons offering patrons a complimentary lunch with their drink purchases. Customers generally stayed longer and drank more (and paid for more drinks).Ultimately, they weren’t getting their lunches for free.

In economics the idea of “there’s no such thing as something for nothing” applies to opportunity cost. The thing you choose rules out other things. So there’s always a trade-off, or cost. And sometimes the cost is more than you actually gain. The goal is to choose things that avoid FOMO or buyer’s remorse; the game is to pick more winners than losers. Aka “doing a better capitalism.”

AvianRampage’s new card game No Such Thing as a Free Sandwich (crowdfunding on Gamefound) anthropomorphizes this titular phrase. 2-6 players will perform the goofy and surreal act of making and plating conventional and far-less-conventional sandwiches for points – lacing its capitalist criticism between the bread like a tangy condiment you like, but can’t quite identify.

The game consists of a business-card sized deck of 52 in a lovely slim mint tin. And while it fits snugly and securely in one’s pants pocket, No Such Thing boasts on the box that it “fits in your pocket… just like a real sandwich!” My clothes (most clothes) don’t have pockets that will preserve the structural integrity of a sandwich. Pocket sandwiches aren’t actual things that exist. The claim is fictional, as false as the idea that it’s possible to gain something for nothing. This carny hype is a sly insight into the ethos of the ethical and socially-conscious game cooperative AvianRampage. It’s a playful reminder that like all “good” advertising under capitalism, it often full-court presses the promise of something for nothing.

No Such Thing is decidedly something. Small and compact, the game itself is as packed and stacked as a Dagwood. Games are played over ten rounds. Players start each round with a hand of two Ingredient Cards, and a Challenge Card is revealed which dictates the round’s unique scoring goal. Players must play 1 or 2 ingredients to the table to build their sandwich. Some ingredients have special game-changing powers that may or may not trigger. Then the relevant scoring conditions are tallied on the Ingredient Cards. The player with the winning score takes the Challenge card. The player who acquires the most Challenge Cards wins.

Of the 52 cards, 42 Ingredient Cards depict 30 unique ingredients. There’s no bread, and only a few traditional fillings. A slice of cheese, a ripe tomato, a pickle slice, and those soulmates peanut butter and grape jelly.

Most ingredients are modified by adjectives that aren’t in anyone’s definition of “delicious” – such as overripe avocados, underripe bananas, wilted salad mix. Many ingredients won’t be found in the fridge – nor the kitchen. You’ll loot bathrooms for antacid tablets, rip grocery lists from bulletin boards, dump junk drawers for birthday candles, and fish out fish food from the aquarium.

Sandwich artists in No Such Thing are surrealists, and their art is MAD Magazine-influenced modern sculpture. The finished products will usually be of sub-optimal quality, and inedible. And you will want to construct them that way on purpose.

Because sandwiches don’t have to be savory or delicious to win. They don’t even have to resemble sandwiches thanks to 10 double-sided Challenge Cards which dictate what kind of sandwiches to make. Challenge Cards are won each round by the player who best meets their scoring requirements. They read like strange superlatives from a high school yearbook: Best Sandwich or Worst Sandwich. Most Practical. Blandest. Most Glamorous. Most Disgusting.

Each Ingredient card lists five categories which the Challenge Cards reference for scoring: Presentation, Taste, Nutrition, Affordability, and Wow Factor. Ratings for each category range from +5 to -5. Challenge Cards house rule which category or categories score each round, and whether you want positive or negative points in said categories. “Tastiest” adds all Taste scores together; “Most Unappealing” wants you to have the lowest (negative) Wow factor. One Challenge restricts you to playing just one card; another forces you to draw and add “mystery meat” from the Ingredients deck to your sandwich.

The five categories on the Ingredient Cards have you in a state of constant min/maxing amazement and hand-wringing due to No Such Thing’s lesson in opportunity cost. Since you won’t need all five categories to win most challenge cards, you will prioritize some qualities and ignore others to focus on a winning hand. But playing Ingredient Cards is all about trade-offs. You may want to save a card with a high Nutrition value for later but also may need to play it sooner because of other categories that may win you a Challenge Card now. Every turn in No Such Thing has you consider tossing out the baby with the bathwater. This constant decision-making as you do the small math each round is a tickling frisson as you build sandwiches as if failed lab experiments, or on a double-dog dare.

It’s a zombified cliche in game reviews to fetishize “messy” adjectives when lauding a game’s strong theme. Having said that, No Such Thing as a Free Sandwich is a card game oozing with theme. Gooey with it. Dripping with it – literally; the tofu is soggy, the apple cores are sticky, and the expired mayo is possibly sentient.

But the real fun of No Such Thing as a Free Sandwich is leaning into its emergent narrative as it peeks out from between the bread each game. There’s fast fun filler mechanics on its plate, but the real meat in the sandwich is when one leans into the story the game is telling you. During our sessions we went around the table to read aloud our masterpieces’ ingredients, often embellishing like tryhard waiters upselling customers. We revived vintage grade school grosser-than-gross jokes. We blessed our sandwiches with origin stories. We cosplayed bygone cafeteria lunch trades, voting on which sandwiches would be most popular irrespective of who won the Challenge Cards. Sandwich worldbuilding. Sandwiches as lore.

The in-game trade-offs I constantly made with ridiculous household items I pretended might make great meals while playing No Such Thing reflected trade-offs in my life. Especially as pertains to my life through food, and how it intersects with age, experience, money, and emotion. Such as the eternal conflict between wanting something delicious or beautiful versus something joyless and functional for rote nutrition. Or feeding myself for the first time out of college with an Ikea starter kit of cheap furniture and kitchen plates. Hangover breakfasts. The munchies. Gambling with the freshness of something in the fridge and hoping against hope it wasn’t *too* far gone. Struggle meals where I made something with whatever was left in empty cupboards like I was fashioning improvised weapons to eat. Happy accidents like putting grapes in chicken salad and feeling like a Michelin Star Chef. The first time I made something from scratch, from memory, without referring to the recipe (pumpkin turkey chili). The first time I cooked it (vegetarian style) for my partner.

I approached No Such Thing as a Free Sandwich with a flight-of-fancy storytelling spirit as I raced to make these wacky, imaginary lunches. And through the metagame and conjuring of memories it did the improbable – it gave me, through an introspection of my own relationship with food, something for nothing. Making sandwich after surreal sandwich elevated what could have been junk food into a sublime, satisfying feast.