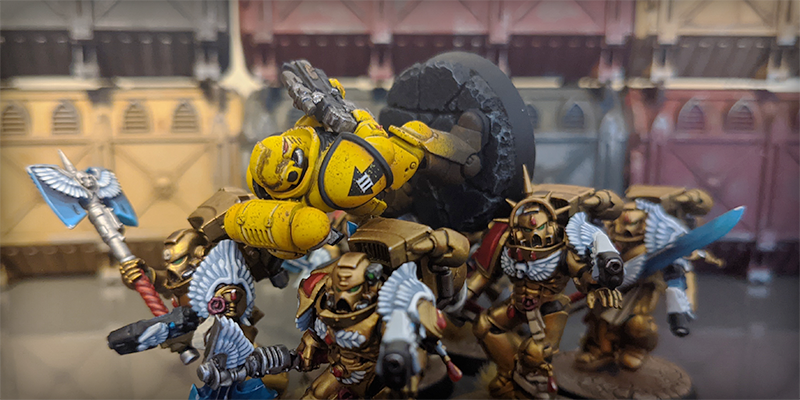 In advance of the upcoming release of Codex: Space Marines and as promised, Games Workshop dropped a massive FAQ update on us today (remember when we said fifteen books needed FAQs? Turns out it was more). There’s a lot to digest, so we’re poring over every word of the updates and noting what’s changed and our thoughts on what it means for the faction. In this article we’re looking at Imperial Fists (and Crimson Fists) and the changes to their supplement.

Fists got off relatively lightly in the word count of their changes, but they have some pretty sweeping implications for how the faction plays. We’re going to start out by looking at the updated doctrine, then chapter-wide rules, and wrap up with the characters.

Continuing GW’s theme of not knowing what they want to do with Imperial Fists, the doctrine receives a massive nerf that means it no longer works with any sort of Bolt weapon. There aren’t many units that can really take advantage of this anymore – everyone’s best friends the Eradicators are likely the best shot, as a big squad of 6 with heavy melta rifles and multimeltas at least have 16 shots and being CORE can be dropped into devastator doctrine again on subsequent turns with Adept of the Codex. Suppressors and potentially heavy Hellblasters could also make use of it, though they’re relatively fragile. It’s gone on any of the high-volume weapons, so there’s no longer any synergy around using the chapter tactic and stratagems with heavy bolters to create viable anti-tank (though the crushing points change to Centurions already killed that to a degree). Not much use for anything that doesn’t have reasonable volume of fire and is CORE – the Gladiator Valiant, with 8 antitank shots, only gets +2.81 damage from the doctrine, and only on the first turn (assuming it can actually see a viable target, which is far from a guarantee).

The Banner of Staganda and Eye of Hypnoth were both limited to CORE only – a completely unsurprising change. The special-issue wargear Fist of Terra was changed from D3 damage to 2 damage, an unsurprising but helpful little buff, given that it’s based on a power fist.

The Geokinesis powers were all given categories, much like the updated codex powers. They’re all either Blessing or Witchfire powers, not that we’ve seen any rules yet that interact with those categories.

Wrack and Ruin also received a minor wording tweak – it now specifies Area Terrain rather than “on a terrain feature”. Not an actual change in its use, as you couldn’t be wholly on or within non-area terrain.

In addition to being categorized as a Battle Tactic, Strategic Ploy, or Requisition, both Bolter Drill and Close-range Bolter Fire are now limited to being used on CORE or CHARACTER units. Guess they didn’t want you to use them with Centurions, since there’s not really anything else with significant amounts of bolters.

Lysander’s Teleport Strike now tells you to refer back to Codex: Space Marines, so there’s still only one source of truth on how Terminators deep strike (good!). His captain aura also picks up CORE limitations to match other captains.

Garadon also gets the Core limitation on the captain aura, and his Signum Array got a buff – in addition to functioning at the beginning of the Command Phase (so you can buff something that moves faster than he does), it’s now +1 to-hit, rather than Ballistic Skill 2+. You can now use that ability on a model/unit that already has BS2+ to counter out a to-hit penalty.

Pedro gets the new Chapter Master rules from Codex: Space Marines, and gains the Rites of Battle rule from a captain that he would otherwise have been missing. Oath of Rynn also specifies CORE units only.

The vast majority of this update is exactly as expected – a few things were tweaked to be limited to CORE only and the characters updated to match the codex. The significant nerf to the doctrines came completely out of left field – it was already in tough shape without being able to use it past the first turn, and the momentary spark of hope from Adept of the Codex in the 9th edition Codex: Space Marines was quenched with this limitation – instead of opening up possibilities for units that wouldn’t otherwise be able to do serious AT work, instead it’s just a buff for Eradicators, a unit that really didn’t need much more help.