In advance of the upcoming release of Codex: Space Marines and as promised, Games Workshop dropped a massive FAQ update on us today (remember when we said fifteen books needed FAQs? Turns out it was more). There’s a lot to digest, so we’re poring over every word of the updates and noting what’s changed and our thoughts on what it means for the faction. In this article we’re looking at the greatest Space Marine Chapter (and Legion) of them all, THE ULTRAMARINES! Editor’s Note: The views expressed by these authors do not necessarily reflect the views of Goonhammer dot com about Ultramarines.

The FAQ release changes a number of units in the supplement in substantial ways, adds the CORE keyword to others (and adds it to certain abilities and stratagems), and updates some wargear to bring it in line with the new Codex: Space Marines changes (with one notable exception). The FAQ also applies the new categories to each of the book’s stratagems and adjusts some text. There’s a lot here, so without further ado:

Almost every one of the Ultramarines’ custom units saw changes, some more substantial than others. 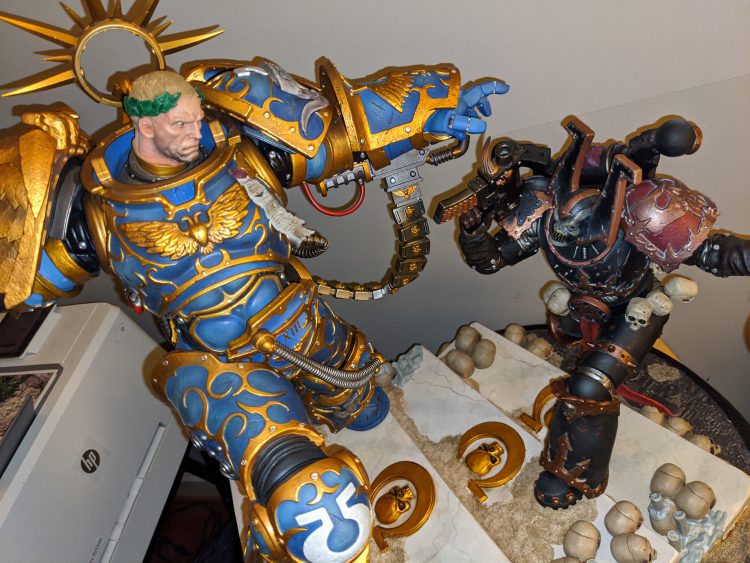 Guilliman’s XIII Primarch Aura (the Ultramarines Super Aura) suffers fewer changes from its 8th edition version: Guilliman still gives out the old Chapter Master re-roll to units within 6″, though now the effect is limited to UTLRAMARINES CORE and CHARACTER units. This still includes himself, which reduces the potential for bad rolls to stop him from killing something – a problem that marine captains are now vulnerable to. They’ve also folded in the re-roll 1s to wound part of the aura and limited it to ULTRAMARINES CORE units, keeping it in-line with a Lieutenant’s Tactical Precision aura.

Master of battle gets the AURA tag but is otherwise unchanged, meaning Guilliman provides rerolls of 1 to IMPERIAL units within 12″ – this includes non-CORE units in your army – and also restores the old iteration of And They Shall Know No Fear on top of the new version, granting marines within 12″ re-rollable morale that ignores all modifiers to combat attrition. One gets the impression that GW forgot what this aura did when updating the FAQ, but this means that marines actually benefit from the additional upside on morale tests, so that’s good.

Avenging Son adds a new ability that forces Guilliman to be your Warlord if taken, absolutely no exceptions. Seems a touch superfluous given that realistically you would only really take him in a Supreme Command detachment in the first place, but now he doubly has to be your warlord. But that’s fair – I mean, why would Guilliman be taking orders from a random Lieutenant? Or Lord Admiral Spire?

Overall these minor adjustments aren’t quite as important as the adjustments that happened around Guilliman – reducing the impact of Captain and Chapter Master auras makes Guilliman’s much more useful to have on the battlefield, and elevates him as a force multiplier.

GW celebrates the release of Calgar’s own comic book series by giving him a bit of a nerf. Papa Smurf’s rues have changed to mark him as a current-iteration Chapter Master: nothing unusual – he’s still probably worth it at 55 pts over a generic Gravis master given his no-penalty fists, additional attacks, relevant shooting, half-damage effect and bonus command points – but the Gauntlets of Ultramar retain their previous d3 damage characteristic which is just miserable to roll out against multi-wound units (of which there are more than ever). All the same though why would you take him when you can take Guilliman?

The answer is probably the half-damage. The Victrix Guard (discussed below) will only protect your characters against ranged attacks. In melee, it’s every Ultramarines Hero for themselves – and Calgar’s half-damage mitigation shines through here. While it won’t really help against the Nightbringer, it’ll help against the plethora of 2-damage weapons on the battlefield now.  Plus, Calgar is an INFANTRY unit still, and can benefit from having an Apothecary apothecary around while Guilliman (being a MONSTER), does not.

Tigurius’ Master of Prescience ability only hits CORE and CHARACTER units now, otherwise it’s unchanged, activating at the start of the battle round. Tigurius is only 15 points more than a standard chief librarian with masses of upside for the extra investment, incorporating both the Chief Librarian warlord trait and Relic as his baseline kit saving you the hassle of spending trait slots, relic slots, or CP on them.

Cassius is relatively unchanged from his 8th edition version. Inspired retribution now tags CORE or CHARACTER units rather than all units; otherwise he inherits the standard chaplain wording and  Infernus was also updated to have a 12-inch range on the flamer part. Cassius is 25pts cheaper than a Primaris master of sanctity but being a special character with a fixed warlord trait, he’s locked out of being able to take the Wise Orator trait and that means there’s little reason to ever take him as he is stuck with 3+ litanies and 2CP Commanding Oration.  Plus, that finecast model… gross.

Standard captain changes – Sicarius now grants ObSec to a single CORE or CHARACTER unit rather than any Ultramarine, but the talassarian tempest blade gained the +1 Strength attribute of all power swords, making him a better fighter. Even with this, he’s still not really worth it over other captains. Also again, he’s finecast.

Unchanged beyond his servo arm being updated to not take a hit penalty. Useful when his Predator or Land Raider (1) inevitably gets blown up. With the Stalker no longer taking a hit penalty on the move or against things without FLY Chronus may be worth sticking in one as he still hits most targets on a 2+ then.

Also, given Guilliman’s Master of Battle aura, you could still have any vehicle (a Land Raider Crusader, maybe) with Chronus hitting on a 2+ reroll 1s. That would require you to use a Land Raider, but there are dumber ideas that come to mind with this update.

These guys gained the coveted CORE keyword, and now have the updated bodyguard rule: If they’re within 3 inches of a character with 9 wounds or fewer then that character cannot be targeted with ranged attacks. This applies even if you’re closer to the character than the Honour Guard, and this protects you from abilities that ignore the Look Out Sir! rule. Unfortunately this change makes them rather worse as the main reason you took Victrix was to save Guilliman from spike damage getting past his 3+ invulnerable save in melee combat. This means if someone like the Nightbringer shows up, Calgar or Guilliman are going to have to try and survive that S14 attack on their own rather than using these guys as Tau Shield Drones.

Otherwise they retain their 3+ invulnerable save – the FAQ points out that their ultima storm shields do not change to match the new profiles – making them one of the only marine units in the game left with a 3++ and now that they have the new power sword with 10 attacks per unit on the charge they will scythe through most chaff. So they’re better on their own, but kind of worse as bodyguards.

Receive the same updated character protection rules and power weapon changes as the Victrix Honour Guard and the core rule, but are otherwise unchanged.

The ancient exchanges his increased astartes banner range for the new chapter ancient’s +1 to hit in melee ability. The lack of points changes presently leaves him getting the chapter ancient upgrade, a 2+ save and a power sword for free compared to a regular firstborn company ancient.

The chapter champion gains the new standardised abilities for champions: Being able to heroically intervene 6” is now a choice rather than mandatory and the unit gained the ability to fight first against characters. Unlike the generic chapter champion, this version re-rolls both hits and wounds against characters rather than just wounds. The Chapter Chamption does however lack an invuln and the generic champion has caught up to the 2+ save with the change to combat shields so while improved, the Chapter Champion is still at risk of being murked suddenly.

The leftovers from that time Macragge almost got eaten, these veterans also gain the CORE keyword and one extra wound. In what seems like a fairly obvious oversight, their price remains unchanged making them 2 points per model cheaper than Tactical marines. They’re still awful Finecast models (2) but if you really want to bully your Tyranid-playing friend then undercosted AP 3, re-rolling all-hits-and-wounds boltguns are about as nasty as it’s going to get.

Now that marines have 4 slots for warlord traits instead of 3 there is a bit more room to take some of the more narrow traits.

Some minor relics adjustments, including a pair of tweaks that add the Aura tag to abilities.

These are a set of relatively minor and expected changes overall. While we suspect that the writers forgot what Guilliman’s Master of Battle aura did, time and the Forge World Index will tell if his current auras are enough to actually make Ultramarines vehicles good, or if it’s better to just bring dreadnoughts and Eradicators. Outside of the nerfs to Calgar and Victrix Guard, any nerfs that the Ultramarines suffered were in the pages of Codex: Space Marines rather than this FAQ (we’re still smarting over the loss of double-shot Aggressors). The Ultramarines’ design philosophy appears to be that the faction can do a bit of everything, and do it well, but there’s nothing they can do that one of the other chapters can’t do better. This may have the consequence of making them a faction with a higher floor but lower performance ceiling.