Recently, Warhammer Community hosted a preview of one of Warhammer+’s new shows, Hammer and Bolter. For 24 hours, we could watch the first episode of this anthology series, Old Bale Eye. Future episodes promise stories from all over the worlds of Warhammer, but this one should be familiar to many. Full disclosure, I’m an animator who’s been animating for the web for the last 15 years, and I made Dawn of Awesome when I was like 18.

For the first episode, we have Old Bale Eye, the story of Commissar Yarrick from the perspective of the Orks he’s been owning for the last hundred years. I think this is a great choice for a premiere, as it’s a story most 40k fans will know, and it’s got Orks in it, which is always a plus. The framing device is a Runtherd telling the story of Commissar Yarrick to a couple of Ork yoofs who reminded me of greenskin Beavis and Butthead. This framing device works wonderfully, and has a real campfire tale feel to it. The larger-than-life characters of the 41st millennium are well suited to this sort of folk tale storytelling, and it provides a ton of levity. Speaking of, it’s funny! Genuinely, actually funny! There are some wonderful poses and animation that drive the jokes home, and it does my heart good to see a Warhammer story that can make me laugh without undermining itself or falling back on tired memes.

The narrative cuts back and forth between a few iconic moments in Yarrick’s life and the Runtherd weaving his tale. While I haven’t read all of the Commissar Yarrick novels, this is the first time I’ve seen some elements of his story as fleshed out as they were. The human rebellion on the Ork Rok, the moment he claimed his power klaw arm, and the defense of Hades Hive are all here and are all gratifying to see. This isn’t just fan service, however – among the action and jokes, the old Runtherd’s narration keeps the viewer up to speed and serves as the connective tissue between these various vignettes. Said Runtherd’s story even ties into Yarrick’s here and there, which I appreciated. This is all sold with some charismatic voice work that would fit right in with the better Dawn of War games. If I didn’t know better, they were some of the same voice actors, but I have not been able to find a cast list anywhere to confirm that.

This is where this episode, and Hammer and Bolter as a whole, really lives and dies. We have seen the occasional shot in a sizzle reel and plenty of still images over the past months, and now we finally get to see it all in motion. In short, you can tell it was made on a fairly tight budget. The IMDB page for the episode also shows that the team that worked on it is not exactly huge. It’s not bad by any means – this ain’t the Riot Quest teaser we’re talking about here – but you can see where corners had to be cut. If anything, this reminds me of an Adult Swim cartoon in a lot of ways. Think Metalocalypse, Black Dynamite, or Frisky Dingo. Small teams, small budgets, but made up for with charm and style, which Old Bale Eye definitely has. 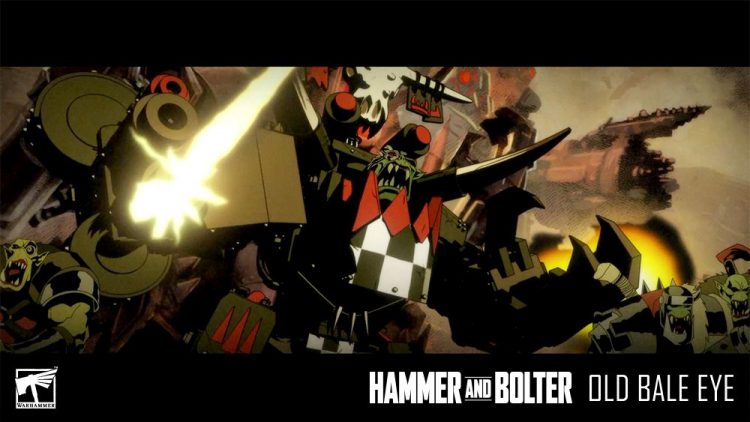 The art style, evocative of Mike Mignola’s Hellboy comics or the aforementioned Black Dynamite animated series, looks fantastic in still images. Bold black shadows, sharp angles and dramatic lighting are striking and give the show its own identity. There’s also a bit of cel-shaded CGI in the mix too, for more technical characters like Ghazgkhull Thrakka’s mega armor, Space Marines on foot, and so on. Those bits remind me a bit of the CGI Berserk movies but are used extremely sparingly, and seldom in close-up. This is a pretty solid decision, as low budget 3D animation is a much harder sell than low budget 2D animation. The two mediums mix well here, and I think they’re used pretty intelligently.

It wouldn’t be a Warhammer story without a battle or two, and here’s where the animation really needs to do the heavy lifting. What people may not understand is that animation is expensive and doing big battle scenes even moreso. As a result, the battle scenes frequently feature panning shots over static images while sound effects and some camera shake are layered over them, which any action anime fan will be extremely familiar with. These are then interspersed with more traditionally animated characters shooting, chopping, fighting, dying, or what have you. There are also frequent comic book panel-style cutaways which I honestly love. They’re extremely economical from a storytelling perspective, and I assume a financial one as well. I hope none of my talk of animation shortcuts and budgetary constraints comes off as too negative – the reality of animation is that it is a time, labor, and money intensive medium, and the fact that this looks as good as it does is testament to the skill and dedication of the studio, Farside Features. For every simple shot of the Ork Runtherd’s jaw motion tweening up and down, there’s a great action shot to make up for it. 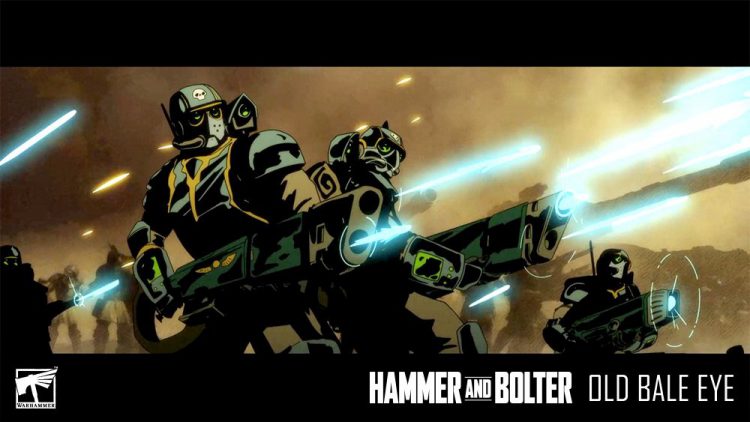 The tl;dr here is that this first episode of Hammer and Bolter comes off as being a bit low budget, but makes up for it with style and charisma. The storytelling is solid, the art is enjoyable to look at, and the team behind it clearly cares about what they’re making. They draw on some of the better elements of motion comics and pull them into more traditional animation to make for a dynamic and entertaining package. Lastly, this is a full 20 minutes or so long! I was expecting maybe 5-10 minute shorts, not whole TV slot-length stories with Warhammer+’s animations. I hope this means future stories also get as much room to breathe as this one. This was a promising first outing from the premium streaming service, and I hope future animations are just as enjoyable.