On Your Marks, Get Set, Gamble! – Downforce Review 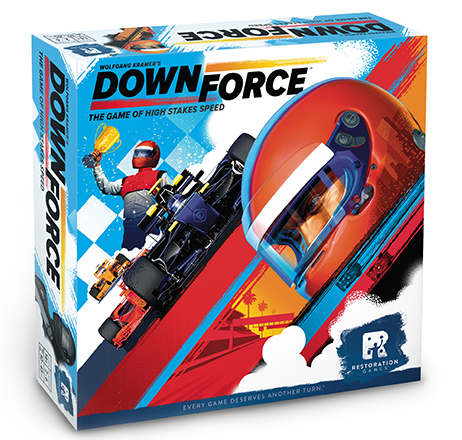 I’m a firm believer in the idea that the best moments in board games occur above the table, between the players. This is true whether you’re playing a multi-hour epic game of space conquest, or a 30 minute card game about farming beans. My favorite games, the ones I keep going back to, are the ones that drive natural player interaction. Despite its simplicity, Downforce is one of best because it turns a racing game into a game about money.

In Downforce you don’t play the driver, crammed into a tiny cockpit and strapped to a racing seat. You play the racing team owner. The mogul who views the race from afar, their derrière lovingly cradled by Pininfarina’s 1.5 million dollar office chair. Sure, winning is great and winning the race usually is a good thing, but at the end of the day what’s most important is how much money you have. A win requires careful bidding on your team, careful bets on who will win, and even more careful play of your movement cards.

Each race beings with the auction phase. The various colorful cars are randomly assigned starting positions, and then they’re randomly paired with a unique special ability. Using the movement cards in their hands, players bid on each car in turn. The car in the pole position, paired with a powerful ability is likely going to go for a lot of money. Cars in the back may go cheap, given the potential that they get jammed up on the course.

Restricting bids to the cards in hand is a clever system that pulls a lot of weight. These cards are dual purpose; a card that moves the Red Car 5 spaces can be revealed as a bid of 5 million dollars on the Red Car. If you don’t have a high value card, you probably don’t want to bid too much for that car anyway. The bids become self limiting and the worst case scenario is that you win a car for a low bid (this is not a bad thing). Additionally, by using movement cards all the bids are upper-bound to 6 million. This ensures you can’t start so far in debt that you’ve no chance to win.

Once the auction is done, it’s time to race. This is where the action is. Almost every movement card will move multiple cars, meaning you’ll have to time your fast cards for a time when its most beneficial to you. Every car printed on your card must move if able, so if you aren’t careful you’ll help someone else more than you help yourself. This is where the fun is.

Because you’ll resolve your cards from top to bottom, it’s possible to dart a car in the back forward and then use it to block the remaining cars. Play is fast and simple, but strategically deep. Tension in the race ebbs and flows as track bottlenecks are approached and the winner is often not certain until the end. Tension is additionally escalated through the gambling steps.

At 3 different checkpoints, players will have to place a secret wager on which car they believe will win the race. This does not have to be your car. This simple addition to the race is what elevates the play off the table, and the game in my esteem. If everyone bets on the first car to cross the checkpoint and then pushes that car to win, the winner will simply be the owner of that car. If, however, players conspire and take shots on cars further back then what emerges is devious maneuvering and shifting alliances. 3 different betting rounds means fortunes can change and leaders can get dragged to the back.

The base game comes with two tracks. One feels like a “standard” experience with plenty of open track, but the back evokes the classic F1 track at Monoco and can be downright brutal in its chokepoints. Two expansions bring an additional 4 tracks to the game, and move Downforce out of the real world and into a Crusin’ World style arcade. The Danger Circuit expansion tracks feature dangerous terrain that makes passing riskier, and a track that loops over itself. Good luck with your bets folks. Wild Ride adds a Safari map where animals will slow the leader down and a sandy dunes track that has jumps! While each expansion track adds new rules and powers, the changes are minor enough that incorporating them is effortless.

Because each race plays so quickly, Downforce lends itself to a Grand Prix experience. I recently got to play all 6 tracks across a few days, and had a hell of a time. By keeping track of total winnings across 6 games, we really ramped up the table talk and negotiating. Brazen offers of alliance and aggression flew, with multiple players conspiring to ensure last race’s winner spun out in the back. With each game functioning as a reset and keeping track of only our winnings across each game, the final scores were separated by only a point or two.

Downforce is as easy to recommend as it is to play. It’s one of my go-to titles with experienced gamers and new gamers alike, and the expansion map options keep it fresh. It does require a clear understanding that if everyone bets on the lead car the tension evaporates, but once your group understands that element this box of plastic cars and minimalist art comes to life.