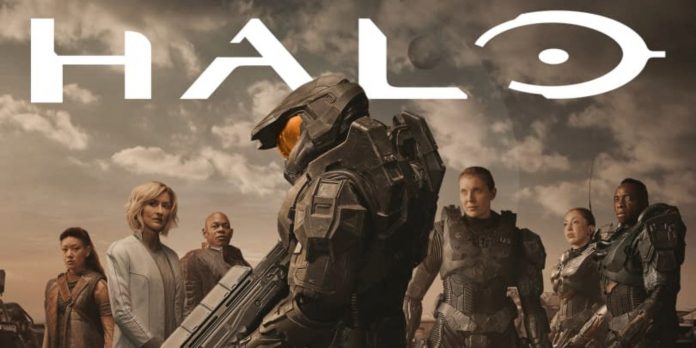 This article contains direct spoilers for the first season of Halo.

What are we talking about, when we talk about Halo from Paramount+?

I think it’s important to make clear first and foremost that we’re talking about a serialized television show. I shouldn’t have to clarify that but looking around the critical landscape of the Paramount+ streaming service’s first real big breakout hit, I do feel like I have to. Furthermore, just by numbers, it’s a television show that has to appeal to people who haven’t read all the books, the comic books, lived and died by fan theories on message boards — as someone who has just played the games, and merely thought their storytelling was ‘okay,’ I am actually on the outer bounds of the demo that a mass market entertainment product is trying to capture.

And still it’s full of stuff to try and satisfy you, the gamer guy who played not just the multiplayer but the singleplayer forever and knows that the suit jack-off thing is a dril tweet but that the suit does actually chemically castrate Master Chief, as per a frankly stupid throwaway line in one of the books. It really did give it all that it could. I’m just not sure what the hardcore Halo audience actually wanted, or why it seems like every assistant editor at every pop culture site turned out to be a book lore partisan with intensely tied-up fervent beliefs about the alleged virginity of the Master Chief.

First and foremost, here’s what we’re talking about: Halo is a good show. At times, it approaches being a great show. Its biggest influences that aren’t other sci-fi pillars in the same space it occupies — Star Trek, Mass Effect, Space: Above and Beyond, Farscape, maybe even a little Firefly but not the really cringe parts — are the movies Starship Troopers and RoboCop, and they’re not minor influences. It’s not nearly as good as those two movies, of course; there’s a stubborn earnestness to the show that doesn’t let it reach the level of subversiveness that Verhoeven reached with humor and irony. That said, anyone who knows the vague throughline of Master Chief Petty Officer John-117, subsequently known as John Halo (we’ll call the TV guy this to separate him from the video game guy), knows that he is the equivalent of Captain America but in space for a decaying, brutally unequal and directly fascist regime known as the UNSC. That’s the “United Nations Space Command” but the show doesn’t bother directly spelling it out because it’s no high-minded expedition-focused rah-rah humanity-forwarding celebration of the species like, say, the Federation from Star Trek.

The UNSC is a brutal military regime that has mired humanity, culturally, in the mindset of the United States Navy from around 1972 and been unwilling to allow any development in over 500 years since then that wasn’t met with complete and fully federated force. Remember that whole thing with the Chevy Tahoe in the background of a first episode fight scene? That makes sense because it is a theme of the show that humanity is stagnant and has not progressed. This is the basis of the entire character arc of one Dr. Catherine Halsey: It is what she objects to and works against, in ways that make her a monster. 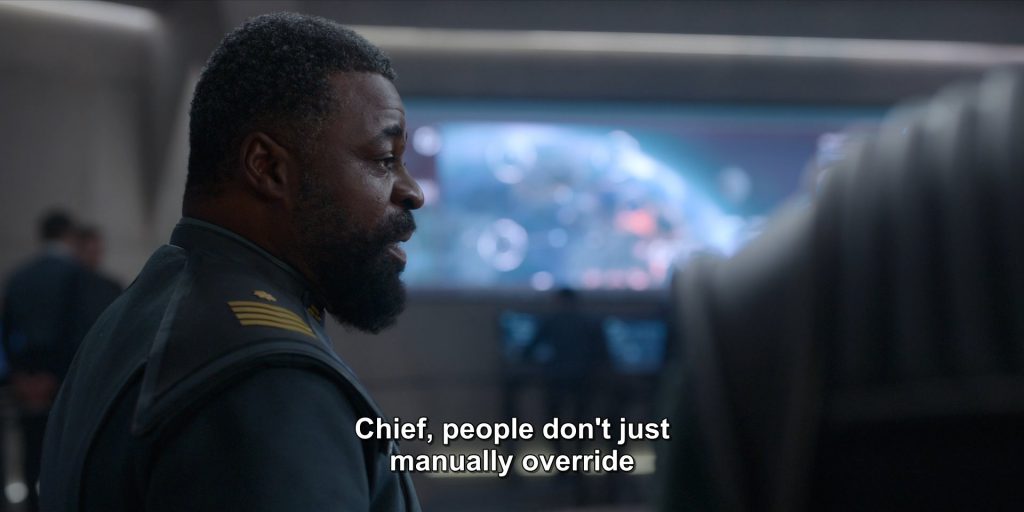 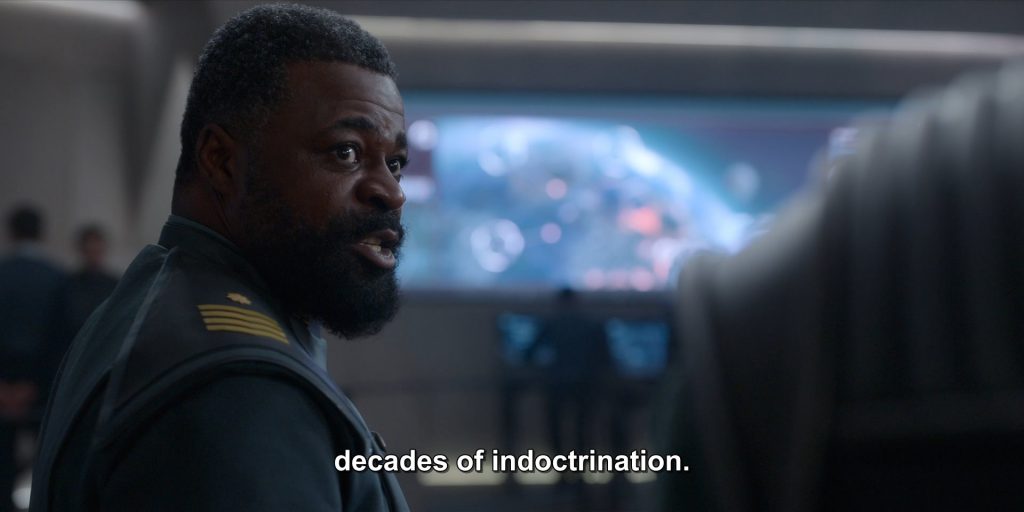 Natascha McElhone as Halsey doesn’t fully steal the show from Pablo Schrieber’s John Halo, but she gives it her best effort. The Covenant are directly and brutally monstrous in a way they weren’t in any Halo game outside of Halo: Reach, and it’s the best and most serious they’ve ever been treated in franchise history, but they can’t hold a candle to the reptile evil of Halsey. Her deeds occupy a majority of the show’s B-plot, sometimes but not always intersecting with what John Halo is up to. This is a spoiler-light review, but the ruins in which Halsey has left her family — both her ‘real’ family in husband Cpt Jacob Keyes (Danny Sapani) and daughter Dr. Miranda Keyes (Olive Gray) and the one she’s invented with John and Cortana (Jen Taylor) is the messed-up emotional core of the show, and while it’s not doing any great A24 level heights of ‘family is so important’ psychological horror, McElhone is extremely good at portraying a very subtle and reserved psychopath who despite fully planning to overwrite her the mind of her ‘son’ with an AI based on her own brain, still feels anger and confusion upon learning that he’s fallen in love — or at least, in lust — with Makee (Charlie Murphy), some hussy Covenant spy he just met.

(We’re not going to extensively get into the caterwauling over John Halo having sex here because almost all of those complaints are tummyfeel nonsense signifying a refusal to engage with the show on its own terms, but it is very funny that after the ‘sex scene,’ which is so vanilla and shows so little skin you could get it on TV in Fox’s 8 PM prime time slot over broadcast, we get the actual most graphic scene of the show as Makee rips off her own fingernail to remove a secret Covenant-implanted weapon there. There’s a lot more gory body horror in Halo, from the teenagers in the Covenant attack in the first episode getting splattered by plasma fire to some very squicky eye and fingernail-based setpieces, than I would have expected).

Despite complaints about the greater lore from some quarters, the show is actually quite receptive to the person who has at least casually played the Halo franchise of video games. Maybe too receptive, in fact; the big capstone action set pieces in episodes one, five, and nine all feature first-person view segments, which have been in and out of style thanks to mega-flop Doom (2005) and Hardcore Henry (2015). I can say that Halo is the best use of the stylistic choice that I’ve seen so far, but that this also isn’t a very high bar to clear. But the guns look right, the HUD in the Spartans’ helmet looks right (minimap included), the sound it makes when the Spartans’ shields are depleted sounds right, the Covenant energy sword looks right, the sticky grenades stick right, the Warthog is a Warthog — as long as you’re not deeply in your feelings about what Halo means spiritually or dedicated to litigating the masculinity of John Halo himself, the show is very willing to meet you where you are in terms of “here is the video game, that is now a show.” The final action set piece is basically one the temple multiplayer maps from the video games, and it’s just as contrived as you’d assume that would be. Maybe they should have respected the gamer community less and done more with stuff like Soren (Bokeem Woodbine)’s space pirates.

Perhaps the biggest legitimate critique of the show is that it ends where it should have begun: in season two, our heroes will be assailing the ring itself, with consequences stemming from the events of the last two episodes of the series hanging over them. I don’t particularly mind this, in large part because being stuck here after nine episodes is much different than being stuck here after a full 20 or 22 episodes as you would get on a standard order, but I do understand it. I think this is a perfect introduction to the world of the Halo franchise; I think these episodes and this distance from the ring (I think in the show they’re just straight-up calling it ‘the halo’ in the lore, which is the right choice) were necessary for people who aren’t lifers to the material to actually understand what’s going on here. Makee’s plot is the perfect build to actually introduce the Arbiter in season two and have it work! Kwan Ha (Yerin Ha), from the C-plot that ties itself off quite nicely in episode seven with a great performance by Burn Gorman, will be a great foil and even possible antagonist for John Halo once we get down to the real problem of what’s going on with this ancient superstructure superweapon.

But don’t take it from me. A buddy of mine showed Halo to his boomer father, who had no idea that the show came from a video game but likes sci-fi genre crap in general, and here were his takeaways:

Is this scientific? Hell no! Throw it all out if you want. But if Paramount was getting focus group reviews like that back from generic audiences that didn’t know anything about Halo except that they saw some commercials for it once 15 years ago with classical piano in them, then it makes perfect sense why they greenlit it for a second season sight unseen. And as far as I’m concerned they were correct to do so.

With Wheel of Time, The Witcher, and now Halo, we’re in kind of a Renaissance for mid-level streaming genre adaptations. I’m not going to tell you you’re wrong if you think that this one has fatally wounded the honor and reputation of Microsoft’s flagship sci-fi shooter title (at least, not more than I already have). I’ll just enjoy the season that they delivered, and mark down when the next one is due to arrive.