Pendragon: Arthurian Chess, Once the King is Dead

Pendragon is one of the most interesting tactical games to come along in quite some time. It’s also, perhaps, exceptional evidence that for some people — certainly this one at least — “interesting” might not quite coincide with “fun.”

The premise is rather simple, and a bit guessable from the title of the game: we are in the Britain of Arthurian legend, and quite late in the game; we’re well into the fall of Camelot. The Round Table has been broken by Sir Mordred, and he and Arthur have ridden off to have their final fateful confrontation at Camlann, where both men will die at the other’s hand. In Pendragon you do not play as either Arthur or Mordred, at least not immediately; there is a larger roster of characters to be unlocked as starting points, which is fitting, because this is a party-based tactical game. Your choices upon loading the game for the first time are either Guinevere or Lancelot, both disgraced for essentially the same famous reason, neither by Arthur’s side as he rides to destiny in Wales. Upon taking control of your character, they realize that despite their infidelities and betrayals, they should still be with Arthur at Camlann, and travel to join him there. 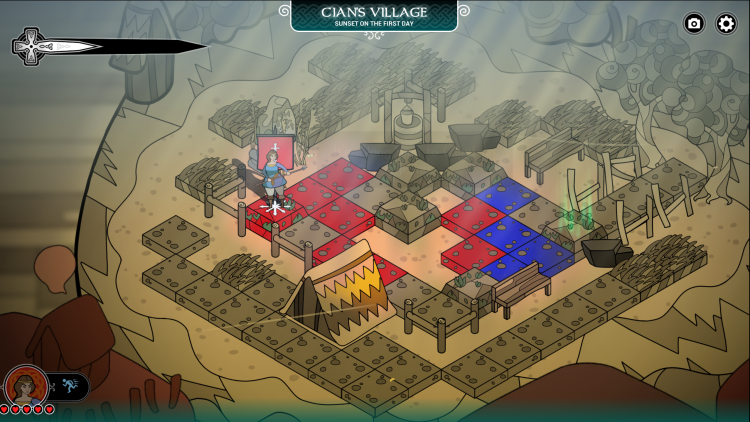 In the most basic sense, this game is all about getting one piece from where Guinevere is standing to the glowing tile on the right.

It’s a game principally concerned, therefore, with movement: in the narrative sense, you are rushing to your husband or liege-lord’s side, moving as quickly as possible through mythic Britain; in the game-mechanical sense, you are moving from left to right across what is, essentially, a chess-board. You always begin on the left, and attempt to move to the rightmost square on the screen; in the rare cases your enemy is trying to escape you instead of vice-versa, they do the opposite. There are other, secondary win conditions — for instance, if you kill all the enemies on the map, you’ve removed your impediments to reaching that rightmost square, and the game is hardly about to make you play out that string — but they’re all in service of movement.

This means the lion’s share of the mechanics are also based around movement; this is not in any sense a combat-first game. The most important bedrock mechanic is “stance,” which determines how your characters — in a very real sense your chess pieces — move across the board. First there is “linear” or cardinal stance; you can move up, down, left, or right one space. (The reason this is called linear instead of cardinal is that the board is viewed at an isometric angle.) In “diagonal” stance, you move, well, on the diagonals; the board is aligned such that you are moving from one corner to another corner, so moving on the diagonal is always going to be the quickest way to get from your starting space to the rightmost destination space on the other side. But while linear movement is slower, it’s the only stance of the two that (by default, before unit powers and exceptions are layered on) can attack. And (again without accounting for special unit powers) combat is a simple and deadly affair: like chess, the attacker always wins and the defender is defeated and removed from play. So the real layer on which tactics are deployed and defended against is always movement and positioning. 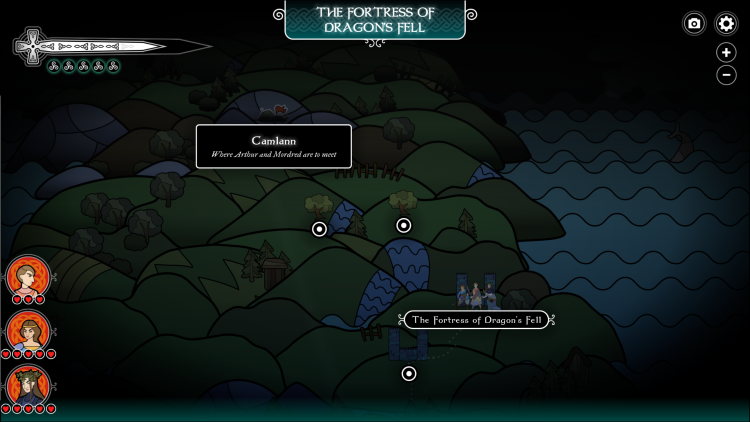 The best bit of the game art-wise is this overworld of Britain, and how its hills move as you advance up the island.

It’s well-implemented and interesting, especially I suspect for chess players…but it’s not always fun! You can spend a lot of time feinting and dancing with enemy AI as you run out their string, and rather than feeling like a duel of wits it mainly amounts to moving back and forth until the AI cooperates and breaks the tie by making a positional mistake. You rarely (at least starting out the game) have lots of units to play with — you start out with one piece deployed, and since your goal is simply to cross the map there are serious tactical considerations as to whether you’d even want more on this or that map. Additionally, the abilities of your pieces are constantly evolving as they grow as characters — this is good in a sense because it keeps things fresh, but especially at the end of runs when abilities are evolving at a fast clip mid-fight it makes you unable to anticipate what your pieces will even be able to do in a couple turns.

And yes, runs — this is a run-based game, though it’s a far cry from your standard rogue-like. Your first run will be rather short, and will almost certainly involve Arthur dying, but as you unlock more characters (meaning more starting points) and get better at the game, you can make runs longer or shorter, either showing up to Camlann later with higher quality allies or, presumably, earlier before Arthur goes and makes a fool of himself with Mordred’s elite knights. The game’s storytelling and writing is quite a strong point, down to the stories that are told around the campfire by your characters each night (in a thoughtful twist, these stories are actually credited to the writers who came up with them in-line, rather than having those backloaded into the full game credits). 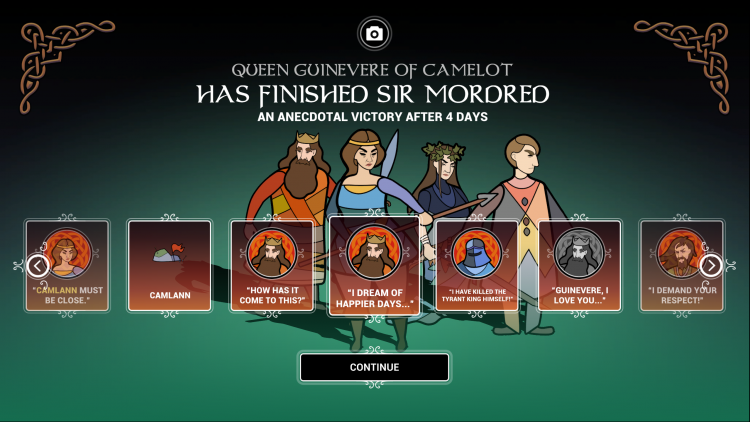 An initial, successful run! But there’s so much more to do — like, say, not get Arthur killed moronically like I did.

While it’s likely to draw a lot of comparisons to The Banner Saga for a number of reasons — the apocalyptic mood of the story, the serious consequences for characters killed or left behind on the field of battle, the mining of a mythic age for a tactics game, the art style (though despite some stylistic similarities Banner Saga is in a bit of a different class here in production values) — Pendragon is a more interior, more focused, and less epic experience, in the literary sense; it only concerns the week or so at the end of Arthur’s life, not some great journey spread across three full games. Still, it’s diverting enough, does a lot of interesting things right, and has a bunch of replay value…if chess is your thing.

Not the game for me, but well put-together and a very capable execution of what it was setting out to do. It’s $17 on Steam and in terms of content and buy-in it’s a $20 game or so; if this sounds like something you’d like, it’s worth the pickup.