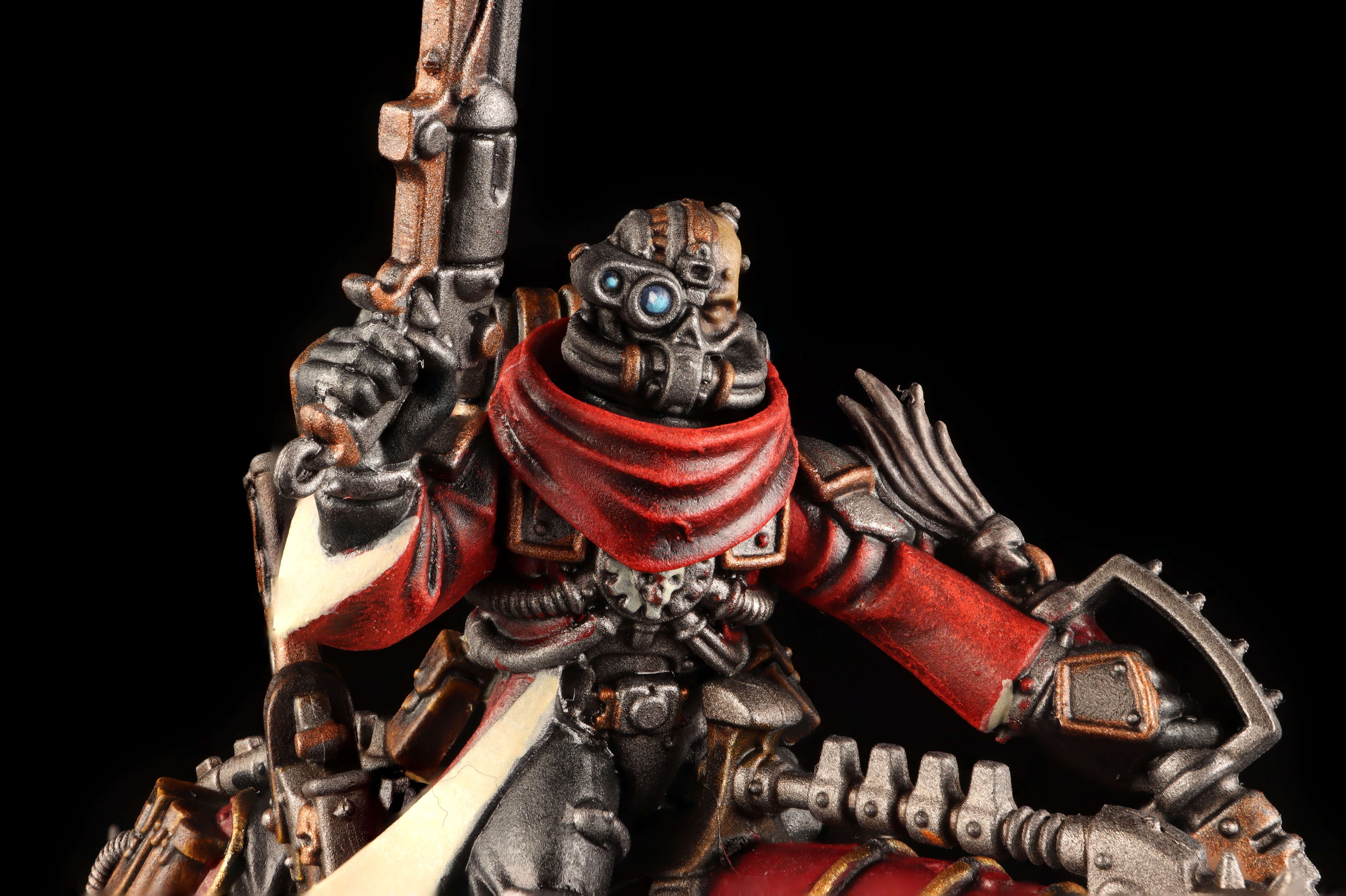 Continuing the retrospectives on a challenging year, this time Pendulin is talking about the absurd number of wildly varied minis he painted.

That this was a strange year goes without saying. But every cloud has a silver lining, and being stuck inside my house all this time meant I had plenty of time to work on hobbies. Like a lot of time. And while I always wish to have painted more, I’m made good use of the time I had and am rather proud of the models I’ve painted this year.

Rather than breaking these models down by month, because it’s 2020 and time is meaningless, let’s instead break this down by faction. First and foremost my faction of choice is Admech. So what say we go over them first?

Admech is the reason I got into this hobby. These mechanized warriors called out to me way back when I first got into Warhammer back in 2018. While I was happy to build and collect what was available in 2018, this year was a bounty of amazing models for Admech. Pteraxii, Serberys, and the Archaeopter are some of the coolest models in the faction.

Though I only built 5 Pteraxii and 6 Serberys this year (and my Archaeopter is sitting on my backlog bookshelf of shame), I’m still thrilled with these new models. In addition to the newly released models, I also tackled a Terrax-Pattern Termite which was my first experience using weathering powders. Lot of fun painting that model.

I also include Inquisitor Coteaz in this because, in my mind, he’s an honorary member of the Adeptus Mechanicus. My Coteaz model’s bird’s right head was missing on the sprue, and I had to craft one by smooshing some green stuff into a roughly bird-headed shape. It’s a little derpy, but I love it.

Starting with Indomitus, I knew Space Marines were going to be a faction I should build. The Bladeguard Veterans are just about the coolest looking marines in my book, and I want to field oh-so-many of them. The Assault Intercessors, Outriders, Judiciar: so many great models.

After I dipped my toe into a half dozen Space Marine models from Indomitus, I wondered how should I follow it up? Then it came to me, for the answer was obvious.

Building an Astraeus right off the bat for a fledgling Space Marine army is, in a word, dumb. But in a better word it’s also awesome.

This models was by far the largest project I’ve ever tackled, and you best bet I took hundreds of pictures along the way to contibute towards our guide on How to Paint Everything: Astraeus Super-Heavy Tank. I haven’t yet typed up the words for it, but expect it sometime in early 2021.

Indomitus drew me in. It lured me with it’s sweet siren song of Marines and Machines. I stayed away as long as I could, but when I saw these amazing new models, I knew it was time to start a Necron army.

Though I’ve only just begun this Necron army, I’m absolutely thrilled to be working on it. These models are slick and their new codex looks amazingly fun.

To paint these models, I settled on a paint scheme that required minimal effort. A base layer of Vallejo Metal Color Steel, followed by washing, some weathering, a couple edge highlights and the orange glow, and that’s that! I also snapped a ridiculous amount of pictures during the painting process of the Hexmark Destroyer, which I also intend to turn into a painting guide sometime in early 2021.

In my second most intense model binge of 2020, I painted the entire Gellerpox Kill Team in a single month back in May. I had these kicking around, new-in-box for quite some time, and I was looking for a project to use Contrast paints on. And let me tell you, Gellerpox Infexted is made for Contrast.

I had so much fun painting these models that I even put together a Fireside with Pendulin: Gellerpox Infected article about it. I dove into the origins of these models, how I approached them, and some generally-coherant ramblings about them. It’s a good read, if I do write so myself.

I started painting Skaven because they are cool. That’s it. I love these little murder-rats and their psychotic attitudes. I’ve never played Age of Sigmar, and I don’t even know the rules that well. But I love Skaven.

If you do the math on these photos, you won’t even come close to hitting 1062 points, but that’s because I painted so many Skaven I stopped taking pictures of them. My long term goal is to finish painting a legit, competitive Skaven swarm army and snap a high-quality picture of the entire thing. It’s going to be difficult even fitting the whole thing in frame, but hey, goals are goals.

Similar to the Gellerpox Infected above, these models were painted almost entirely with Contrast paints. Much like the Gellerpox, Skaven models seem to be built for Contrast as I was able to paint these incredibly fast.

I timed it, and it takes me longer to clean mould lines and assemble a Skaven than it does for me to paint one. Even taking the larger Rat Ogors into account, my average time to paint a Skaven from start-to-finish was under 30 minutes. I don’t know if that speaks well to my painting speed, or speaks poorly to how long I take preparing models. But it certainly speaks something to something.

In addition to painting all the above, I also painted two one-off projects. First was a single Grey Knight, which I painted for our How to Paint Everything – Grey Knights article. I then followed that up with a more casual chat about Grey Knights with my Fireside with Pendulin: Grey Knights. While Grey Knights are a blast to paint, I likely won’t continue building any for some time. I love them, but I’ve already got a dozen projects on my place.

The second one-off project was a single Allarus Custodian, which I painted for out How To Paint Everything: Adeptus Custodes Shadowkeepers, and I’ve also got a corrosponding Fireside with Pendulin: Adeptus Custodes. Unlike Grey Knights, I intend to continue building these in 2021 and beyond.

That’s a heck of a lot of models to paint, and I’m only getting started. I’ve got big plans for 2021. Some of which I’ll even achieve, and a couple of them are even good plans. I’d like to flesh out each of my armies, with Necrons and Space Marines being the focus. I’ve got plenty more Admech, Skaven, and Custodes to build, and build them I shall, but I expect to see less of them in the coming year. Although if 2021 is the year of the 9th edition Admech codex, and that happens to bring a new box of models to build, you best bet I’ll be building those too.

Now you’ll have to excuse me. It’s been a long year of painting models, and I think I’m going to take a break by painting some more models.