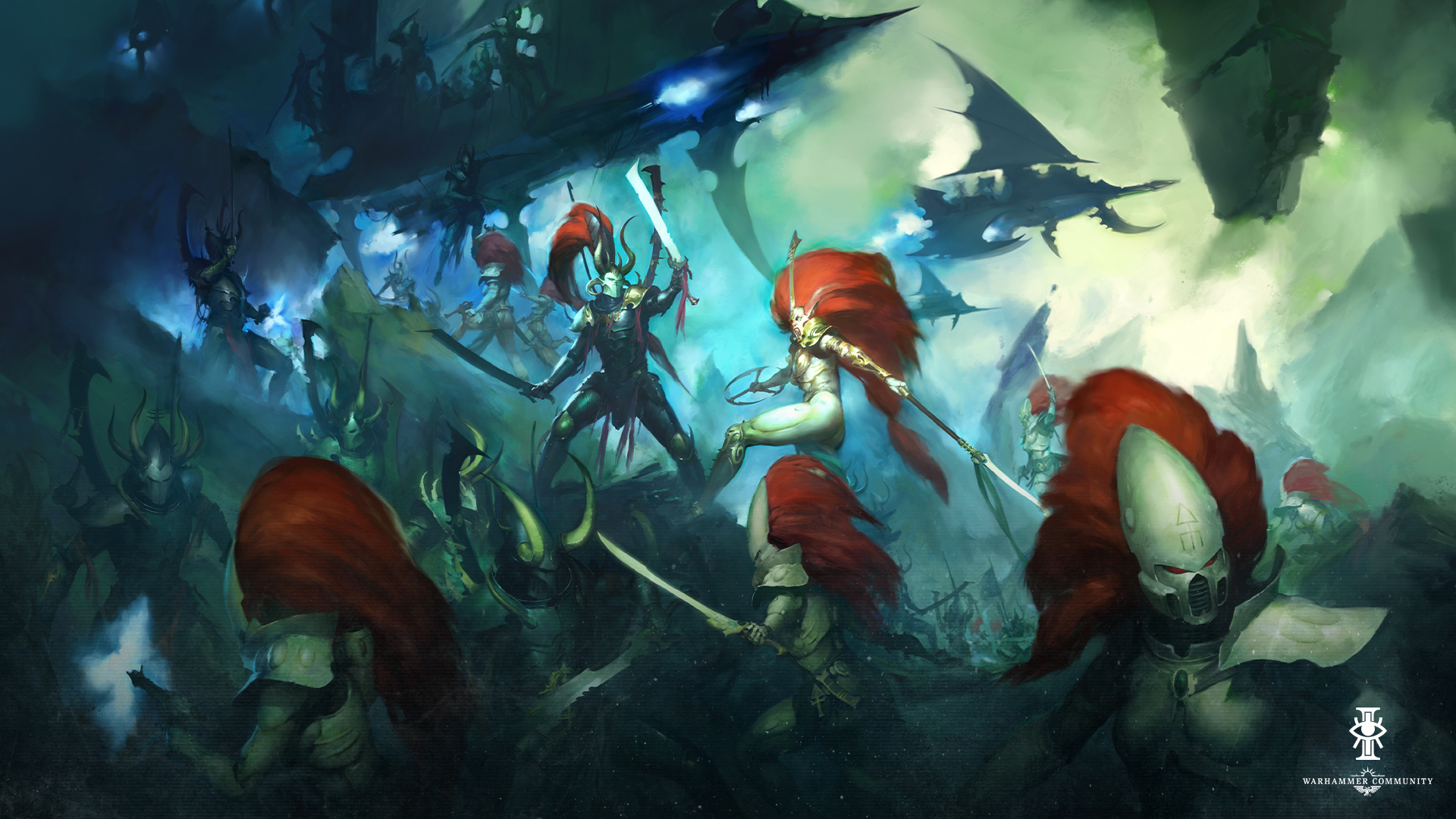 Rejoice Eldar fans – we finally know what Focus Will does!

Today sees the release of the long-awaited FAQ for the first Psychic Awakening book, Phoenix Rising. You can catch a roundup of our reviews of it here, but there have been a few questions bouncing around since it launched that have been addressed in today’s FAQ. As is now tradition, we’re going to take a look at the implications for your armies. As ever there’s a mix of real changes (or important clarifications) and wording updates – we’ll be clear which is which. Sadly, there are also still a couple of outstanding points that haven’t been covered we’ll quickly discuss at the end to close things out. 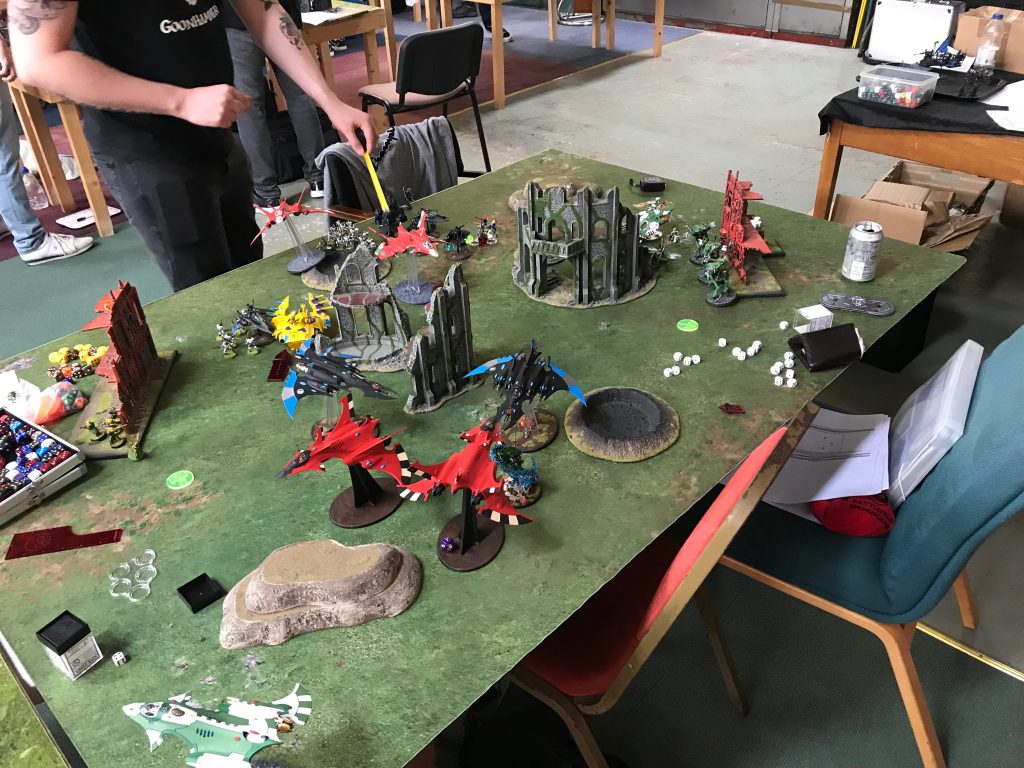 Start off with a simple a wording correction – the original text for the Crimson Hunter Aspect abilities used “CRIMSON HUNTER EXARCH” (i.e. the keyword) which doesn’t actually exist, and the new text correctly refers to “Crimson Hunter Exarch” (i.e. the datasheet). Presumably this wasn’t caught because for every other Aspect it’s valid to use the unit name as a keyword.

The Withdraw Exarch power, which lets you fall back up to 6″ as if it was your movement phase at the end of the fight phase, has been clarified to only work if you’re within 1″ of any enemy models. We were already assuming this was how it was intended to work so it isn’t surprising, but there was a little bit of debate after the release as to whether it was supposed to give you a fight phase move all the time. If it did it would be pretty interesting but sadly, as predicted, it doesn’t. Warp Spiders are left crossing their way too many fingers that they get a big cut in Chapter Approved to be worthwhile, and if they do it’s probably Web of Deceit (a once per game redeploy) that’s the draw rather than this.

We waited for this one but oh booooy was it worth the wait.

Focus Will now gives a friendly <CRAFTWORLD> psyker +2 to their casts for the rest of their psychic phase. That’s an extremely potent ability – while it does take a cast to do it, Farseers can cast three powers a phase in a pinch via a stratagem, so if you have a solo operator they can use this to buff up and then cast their two important powers at +2 (as you can self target with it). However, it’s going to be at its best when you bring another psyker to act as the Farseer’s hype elf, because at the point where you’ve got +2 (or maybe even +3 to your casts via Seer Council) you want to be casting a Smite! 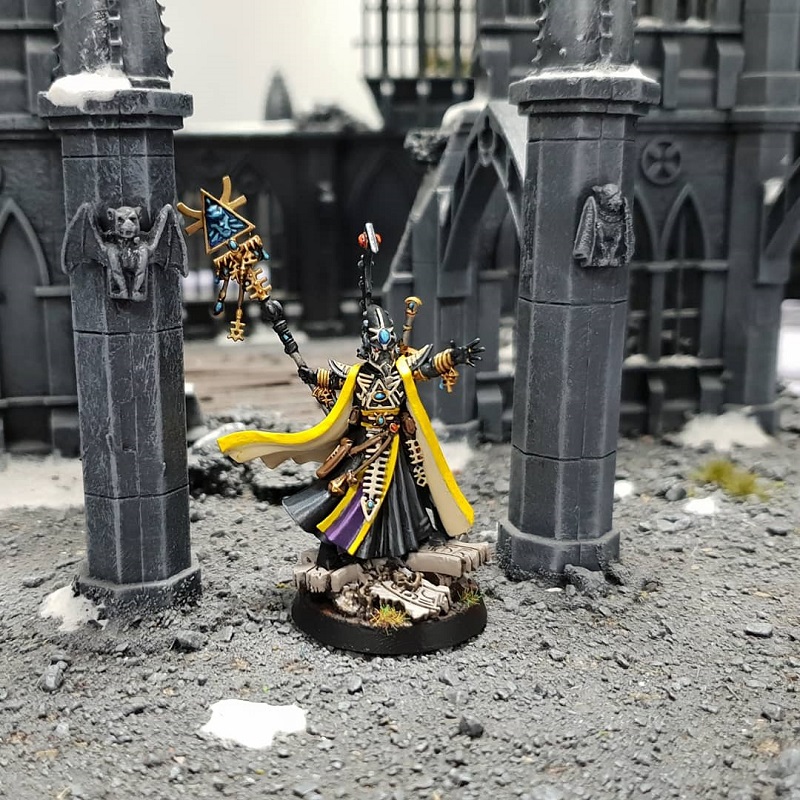 Eldrad obviously takes this silliness even further with an additional cast and a built in +1, letting him get all the way to super smiting on a 7 in a pinch. I’ve been meaning to paint up my Eldrad for a while and this will probably get me over the line to doing it.

The other sneaky things you can do with this are:

I’m already looking at planned lists and wondering if I can squeeze in an extra caster because of just how good this is, and I expect to default to swapping out my Warlock’s Smite for it in most games. Sorry Fateful Divergence, our dalliance was brief. 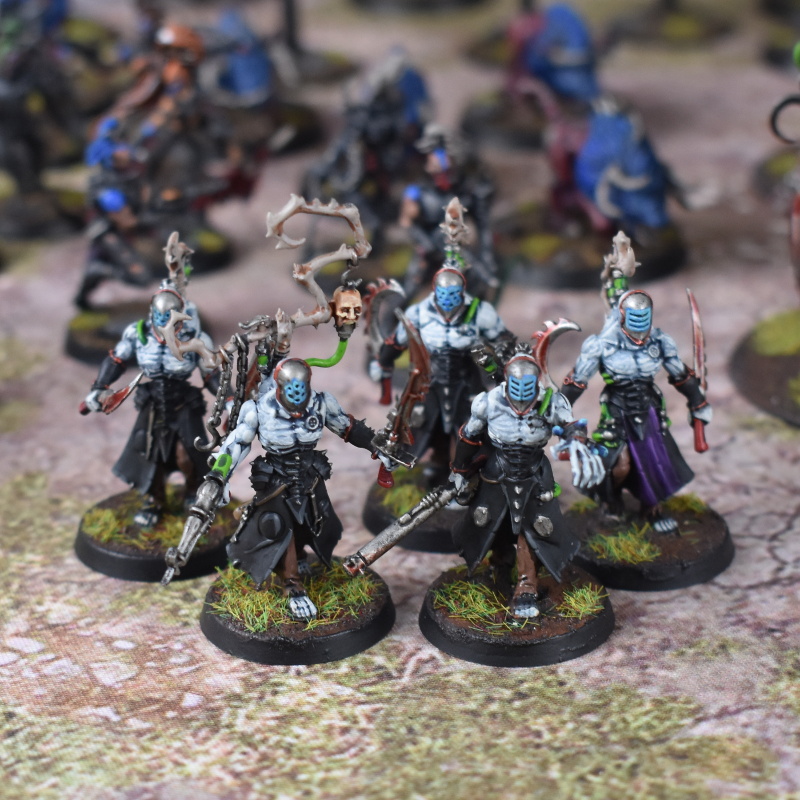 Moving over to the Drukhari, Obsessive Collectors catches a pretty big nerf, now triggering when a unit is destroyed rather than a model. This stops a wounded Talos or Cronos immediately jumping up to full health the second they touch infantry, and prevents the improbable-but-technically-possible scenario of a Wrack sergeant managing to revive an entire squad of dead wracks with a single round of combat.

This had largely already been tried and discarded even in its un-nerfed form, so sadly don’t expect to see this out much in the future.

Another nerf sadly (weeps in elf), this now only applies to melee attacks, stopping the (admittedly obviously unintentional) combo with Venoms where they could end up with D2 splinter weapons wounding on 2s against Space Marines. Dark Technomancers remains untouched as the “good” half of that combo so super Venoms are still possible, but a bit toned down. Once again, they weren’t really getting much traction after initial hype anyway, so it’s not a massive deal other than further reducing the already slim set of worthwhile options. 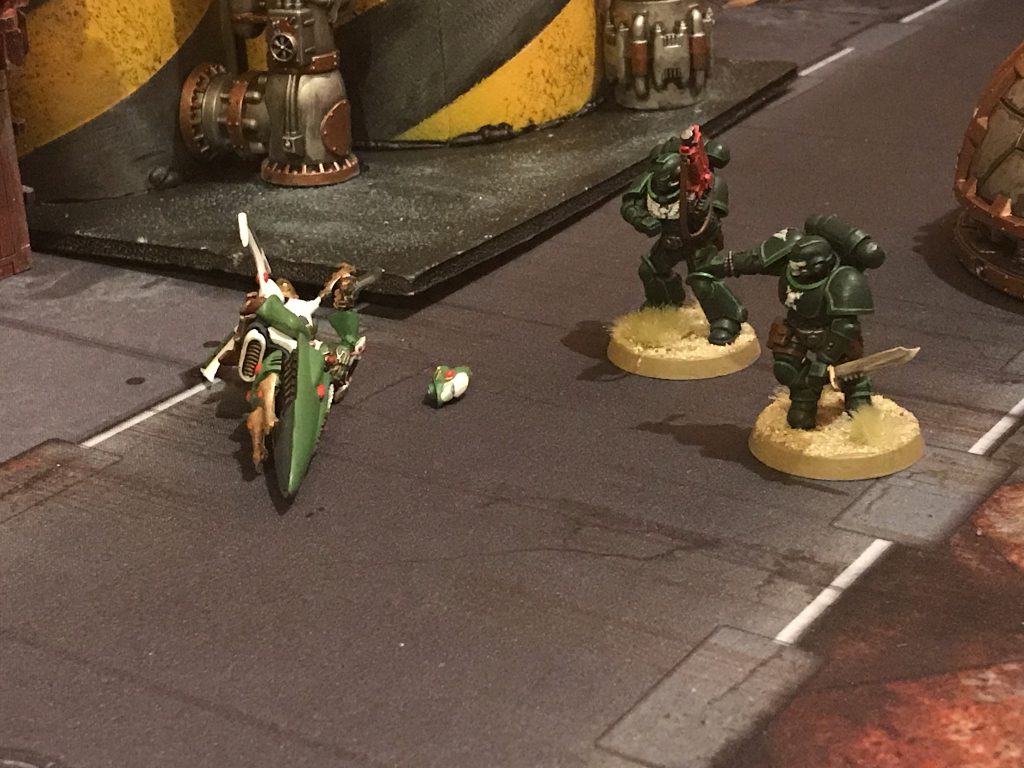 A clarification that sort of shades into a nerf because of how some events were ruling it. Being able to buff a Warlock Skyrunner Conclave so that the entire unit had D+2 on their weapons does, in fact, turn out to have been a bit too good to be true. Witch Strike now only affects the casting model. Sadly that probably leaves it mostly useless – GW keep putting out damage buffs for Warlocks and Farseers (see also the Howling Skysword from the Windrider Host) and I’m starting to wonder if anyone has pointed out to them that they only have two attacks. Admittedly the fact that this is D+2 does make it a bit better given that, but because it’s attached to weapons with no AP it’s still a hard sell.

I don’t actually think this is completely worthless mind, having had more time to consider it. While it isn’t good, I might plausibly give it to a warlock in a list with a lot of casters (so already packing Focus and Fateful) just because it does give them a small chance of randomly one-shotting a careless character. That’s especially true if I’m running Expert Crafters, because it makes their attacks way more likely to land. It’s definitely in a queue behind better options, and makes me wish there wa some sort of mid game power swap option, but you could take this sometimes and be happy. 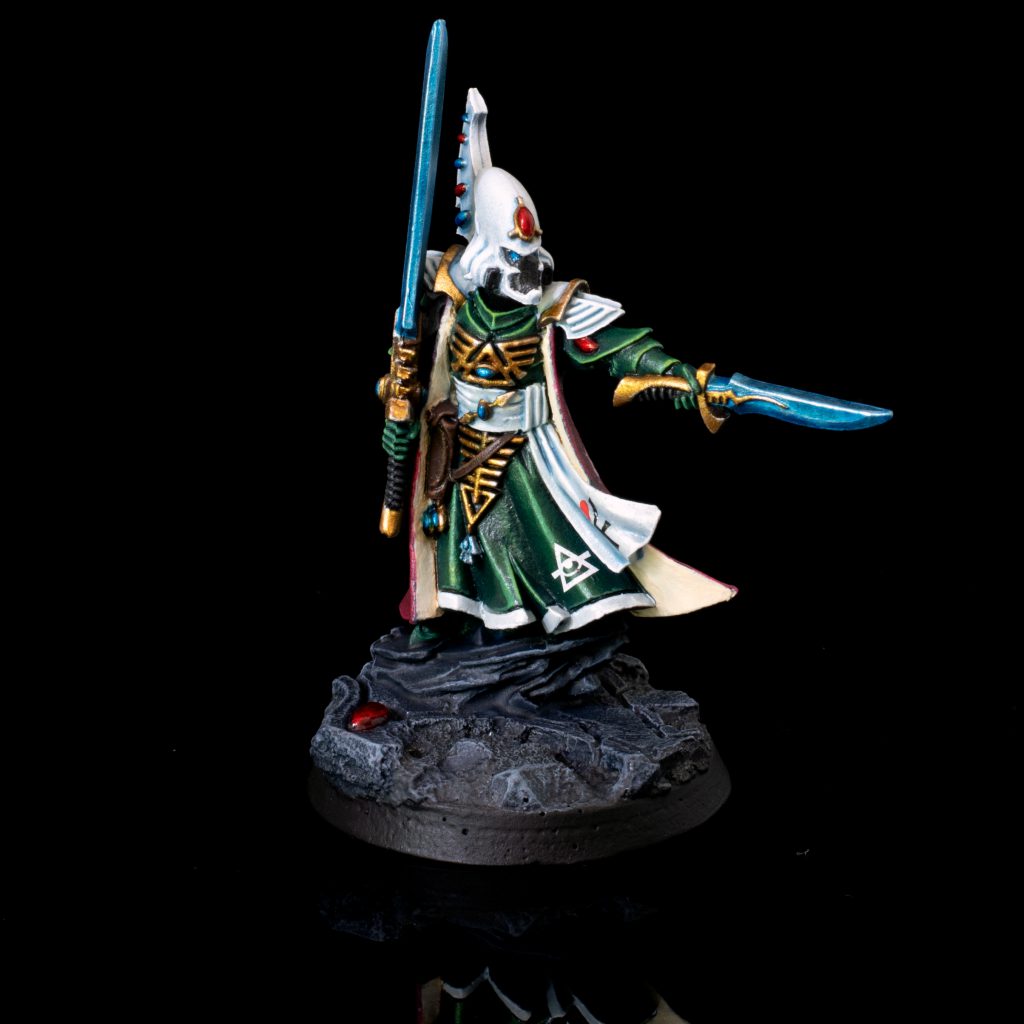 Just a confirmation of RAW here – when you roll a 1 for a psychic test with this trait, it counts as a 2 even for the purposes of whether you rolled a double 1 for perils. Nice to have clarified.

Once again a pure clarification to shut down an especially optimistic reading of the rules, if you choose to take an extra Exarch Power you do so instead of being able to swap out your standard one, so you can only ever have one of the non-default options.

Clarified that, like Khorne Berserkers, Drahzar gets to do both of his fights before the enemy does any if he charged. Most people assumed this to be the case, but again nice to have it clarified. Sadly, he still probably won’t immediately get put into lists because of…

The Ones That Got Away

There are two big outstanding things that could potentially have gotten FAQ attention. The first definitely needs a clarification and I’m a bit sad it didn’t get one since I made sure to send it in to the FAQ address nice and promptly after the release, while the latter is more of a wider problem where GW choosing (not unreasonably) not to address it is an answer in its own right. 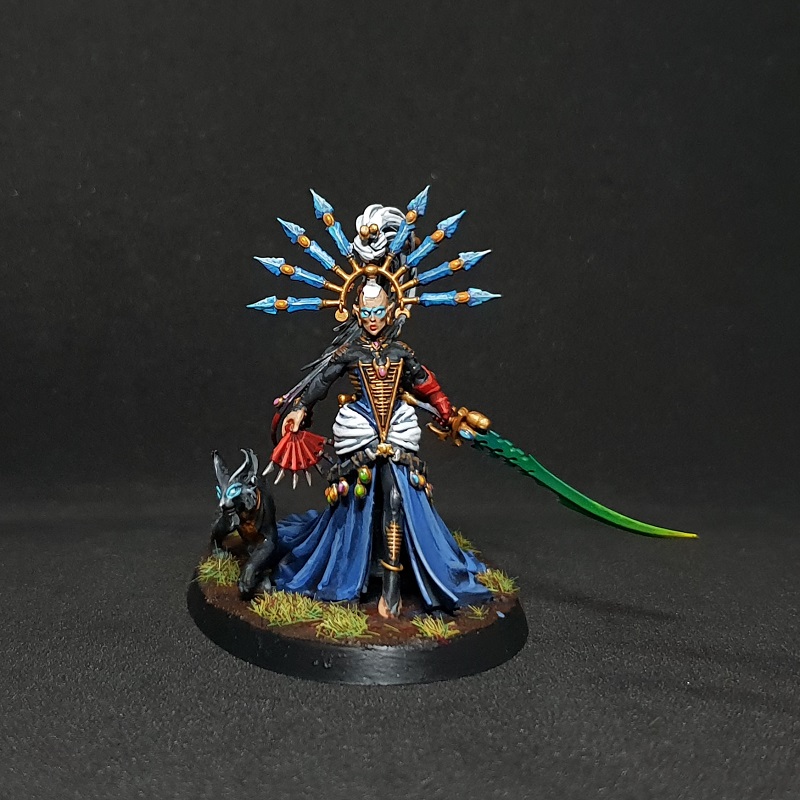 Yvraine, the Herald of Ynnead by Corrode

The first issue is a consequence of the Spring Big FAQ nerfing Agents of Vect by requiring you to have a BLACK HEART detachment in your army to use it, rather than just a Drukhari detachment and a BLACK HEART model on the board. This interacts in a way that appears to be unintended with units such as Mandrakes, Scourges, Incubi, Drahzar and the Ynnari characters, who can be added to detachments without breaking Kabal Obsessions. On a very strict RAW reading, while a detachment that contains four Black Heart units and one of these “wildcards” will still get the Black Heart Obsession, it isn’t a BLACK HEART detachment by the letter of the rules since there are units in it without that keyword, so it loses Agents of Vect.

This is actively being ruled in different directions by different TOs – some go with the intent of not breaking detachment abilities as indicating that the detachment should keep Vect, some stick to the strict RAW and take it away. Both positions are defensible, and this is exactly the sort of thing that really needs an FAQ clarification. On a strictly practical note, it also makes Drahzar way less likely to see play, as “second character in a Black Heart Battalion” is a very desirable slot to fill out with something that isn’t just Archon number 2, but as long as this ruling is still inconsistent it’s not super safe to build strategies around.

When to Choose Exarch Powers in Tournaments 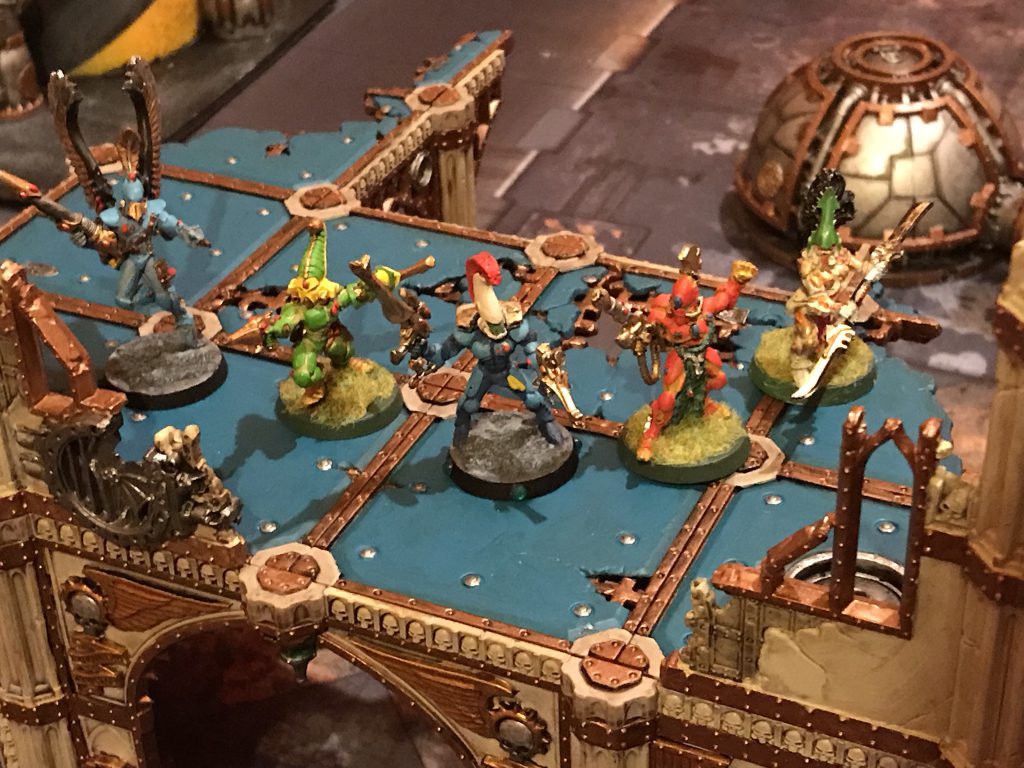 This overlaps with the same issue on character upgrade stratagems from the new Space Marine book. In that, and for these, GW have changed their wording from previous books and stated “you should note these on your roster”. Some tournaments have interpreted this as a requirement not to vary these specific abilities game to game (i.e. include them on your army list) while others allow players to vary them game to game, just like in all other armies.

Once again TOs are split and it would be good to have a ruling – but I think the onus is less on GW to issue one. Fundamentally, they don’t write tournament event rules, and the lack of clarification on this should hopefully galvanise larger tournament organisers such as Frontline Gaming to at least make a recommendation about how to play this among their other FAQs. Much like with the above, it’s a massive strategic nightmare to have your units and army building options vary wildly depending on how different TOs choose to rule something like this, and it’s somewhere where the big event organiser names can use their influence to do some good for the community by taking a stance.

I’m never going to be sad on a day where GW chooses to gift me a very powerful new trick, and while the wait has been a bit interminable it’s good that we can finally go back to having a 100% working set of psychic powers available to us. If you think there’s anything you’ve missed or take extreme and disproportionate offence at my “both sides have a point” stance on the last two things you can reach us at contact@goonhammer.com or via our Facebook Page.