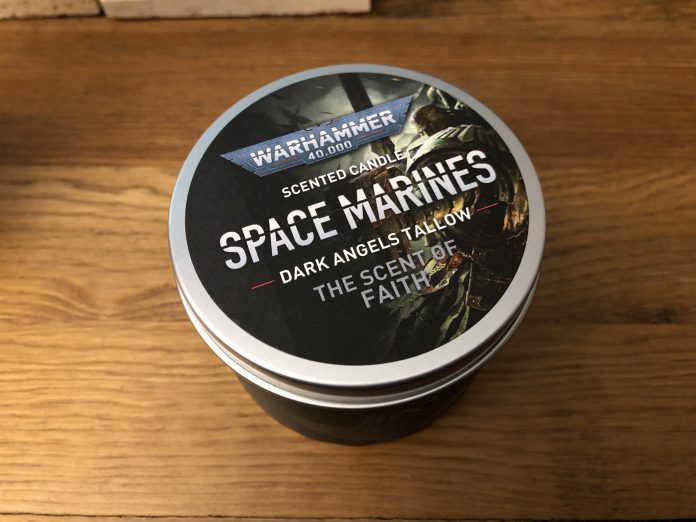 Merchoid started selling Warhammer-scented candles recently, because everything is a commodity and slapping a brand on common objects makes them more desirable. They didn’t pay me any money for this, which is probably good. At any rate, when I saw that they made a Dark Angels flavor I slammed the pre-order button so hard my mouse broke. It arrived recently, and I eagerly tore into it.

First impression is that the can is made of metal. Strong. Love to see it.

The bottom of the can has the usual warnings about open flames. I look at a lot of candles. Maybe you’ve never seen a candle once before, but I’m very cosmopolitan and actually own multiple candles already, so this is all old hat to me. It also, concerningly, says “harmful to aquatic life with long lasting effects”. Not sure how I feel about that! It’s not something I’m used to seeing on candles, but then I don’t usually buy imported British candles, so maybe this is normal for them, on their normal island.

The candle’s color is supposedly “caliban green” but this is Baja blast levels of saturation at best. The website shows something closer to the promised color, but still not Dark Angel enough. The one I got is not that color: 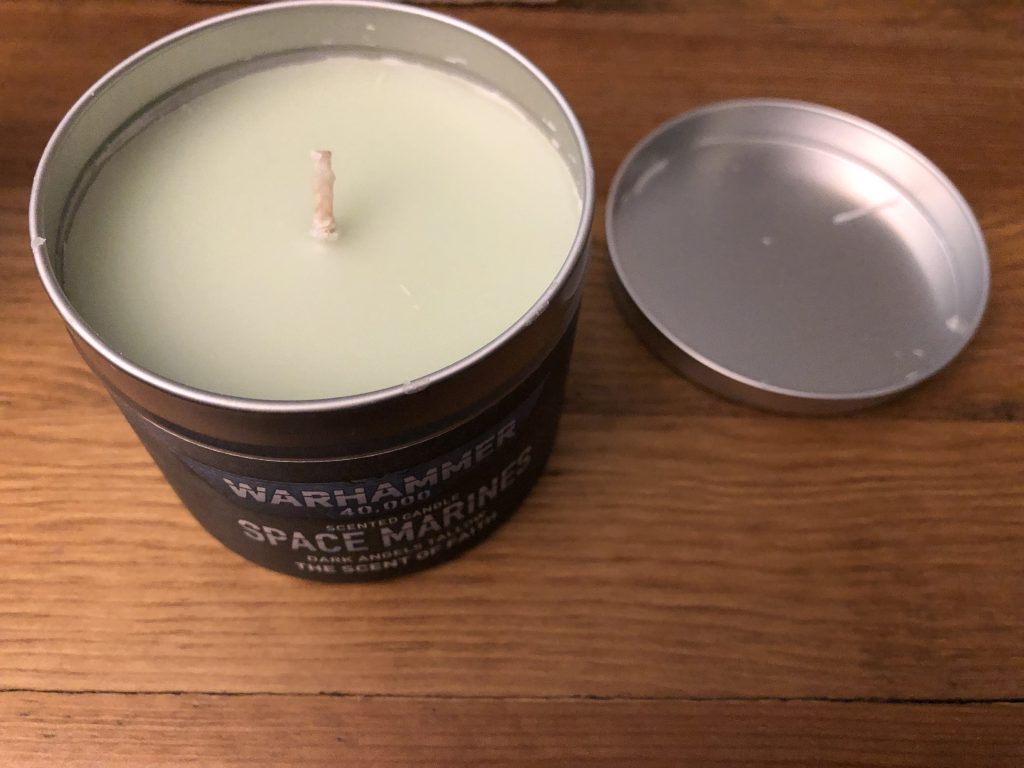 The perfume level is, surprisingly, mild. I expected a Yankee Candle level of migraine-inducing smell, but it’s nice. The quantity of scent is right, but what of the quality? Supposedly this is the “scent of faith” but it kind of smells like cleaning supplies instead? The strongest note is actually uh, burning wick. It has a light, fresh, smell. I barely noticed it, but when I did, I liked it. I didn’t get a huge hit of Faith when it was burning, but it’s been like thirty minutes since I put it out, and the smell is still lingering.

In order to be fair, and because I had access to them, and because of common gender stereotypes about the target audience for candles, I appealed to a representative from the local chapter of the Council of Ladies (my wife) to offer her opinion.

She said it smelled like an air freshener, and not a particularly good one. “Like one of the cheap cones that people put in bathrooms”. She has an impressively acute sense of smell, in addition to being powerful in many other ways, and hated how strong the candle was. I thought the smell was light and pleasant, but I was informed that I am wrong. It was too much, made her stomach churn, etc.

I’ll be honest: this feels like a generic off-the-shelf candle that the company slapped a 40k label on. I think maybe their product development process involves a fixed set of pre-mixed flavors, a choice of themed names from a given media property, and trying to map one to the other within those constraints. There’s probably a candle with the exact same stuff inside but a different label slapped on it. If you check the, I don’t know, the Seinfeld line, The Scent Of Faith is probably the same as the George Costandle. The color is about as far from Caliban green as it can be while still being technically green, and the scent is inoffensive to the point of cowardice.

I didn’t expect a lot from a $22 Warhammer-branded candle. Frankly, I’m just baffled that it exists at all. It might have been made for kitsch value, or just to see what would happen, which goes a long way toward explaining the results. If the idea here was to test the waters on whether Warhammer players were the kind of audience that would put money down on something purely because it has their favorite character on it, then I gotta admit, it worked. Well played, Merchoid. Game recognize game. 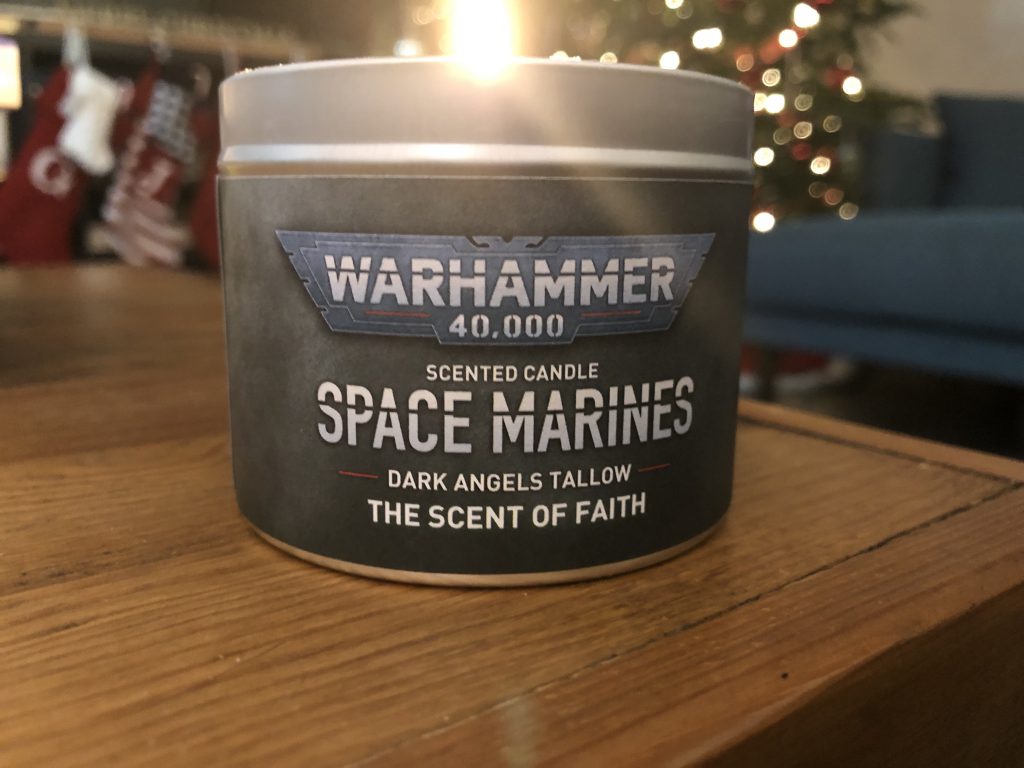 Folks, the candle, it’s not great.

I’m already precisely the kind of person who will buy a product based solely on whether or not it has a Dark Angel on it, and this is barely worth it, even to me (I also won’t buy the Funko Pop!, shut up). It’s not a bad candle – I don’t love it, but it’s not the worst candle I’ve ever bought – but I can’t burn it, because my wife won’t let me, so all it does is sit on the coffee table and give confused houseguests a reason to ask what me what my problem is. Mixed bag.

Sound off in the comments or email us at contact@goonhammer.com if you want to talk about candles or quote that one dril tweet at us, you know the one.