When the Great Rift split across the galaxy, the effects were immediate and brutal for psykers across the galaxy. Dreams, mutations, and the occasional exploded head manifested themselves across the galaxy as intense warp energy boiled forth from the cosmic tear. For the Adeptus Mechanicus the effects were not so immediate. For sure the psychic corruption had an effect on the mechanical forces of the AdMech; data-Daemons corrupted servitors who tore apart their masters, warp-sores melded flesh to metal, and Tech-Priests lost their minds trying to categorize and document what they saw. However the more visceral effect of the rift was the loss of influence, a loss unacceptable to the followers of the Omnissiah.

Fearing that Outposts cut off or ignored due to the rift would declare independence, the grand forge world on Mars deployed Reclamation Fleets to ensure compliance. These fleets set off in all direction, including a fleet or two on the dark side of the Rift. The events of Engine War focus on one of the three fleets that left Mars itself. Led by Magos Xu Kroll, the fleet head out away from the Rift. Among the many Imperial allies that joined the fleet was an alliance of Knight House nobles marching under command of Baroness Sordhen.

This fleet encountered planet after planet, system after system of Chaos Knights and warp storms. Their march was as brutal as it was inexorable. Along the way they suffered loss after loss in battle and warp storm. At one point the fleet became consumed in a massive storm of power. As ships were disappearing or being torn apart Kroll heard a faint signal and followed it in desperation.

Away from Mars and Terra in the Soelich Sub-sector, sat the planet Ordex-Thaag. Abandoned by the Imperium following Ork incursions, the forges were left to run cold. Unbeknownst to Imperium those Knights left behind turned to chaos. Led by Magnate Waersk, the Dark Mechanicum, Chaos Knights, and Daemons gained a foothold on Ordex-Thaag and turned it into the site of a horrifying ritual.

The traitor-forces cored straight through the center of the planet and bound four Daemonic essences. Anchored by the fortress-keep Qysberg on one pole and an obelisk made from a psychically resonant black stone (ahem), the entire planet was transformed into a massive warp anchor. By binding these demons to the planet, they were able to draw energy from a nearby warp storm. As the planet spun this energy was wound around the planet like a spindle. In short, they were able to tear the storm open and make it larger with the ultimate goal of sending it straight at Terra. As Kroll neared Ordex-Thaag they were able to devise this plan and it fueled a deep hatred.

Kroll and his advisers were members of a secret sub-cult within the Adepticus Mechanicus. The Teeth of the Cog are bound by a shared believe that every form of psychic power – including Astropaths and Navigators – were a threat to the Mechanicus. Chasing this belief, Kroll and his forces had come into possession of a device known as the Varlian Device. It had been untested prior to the events of Ordex-Thaag, though it was said to suppress psychic-effects with a powerful null-force. It is unknown exactly where it came from; a side-bar tells the story of Kroll accepting the device from three Necrons in a Magos-cloak. So blind was his hatred that he fell for the deception.

The Mechanicus launched a 2-pronged attack on Ordex-Thaag. Kroll took his forces – and the Varlian Device – to assault Qysberg, while Baroness Sordhen dispatched a splinter force to take out the almost-definitely-Blackstone obelisk. Kroll’s plan was to take the Varlian Device to the center of the fortress and trigger it there. The null-pulse would destroy the Daemon incursion and forces in one fell swoop. The fighting was brutal; the fortress was not fixed in place and could change the arrangement of its walls to confused and separate the invaders. So fierce was the fighting that Kroll was forced to retreat and trigger the device on the outskirts of the fortress. 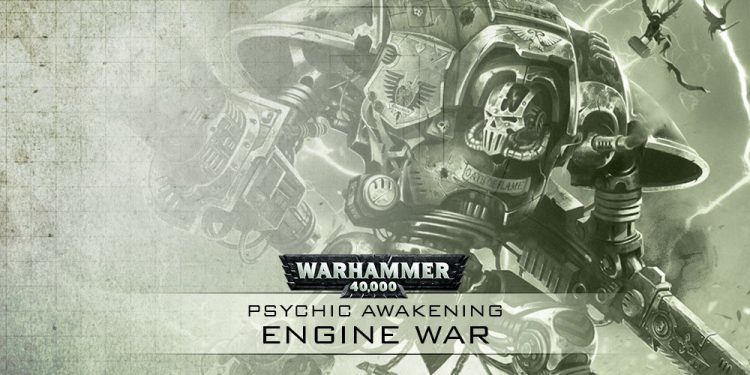 This did 2 things: the first is that it killed a pretty big number of Knights, many of whom served Baroness Sordhen. The null-pulse affected the psychic energies of all the Knight thrones, killing what was left of the previous pilots. The 2nd effect of the device to unbind—but not kill—the Daemons bound at the center of the planet. Enraged, these Daemon essences escaped their chains and vented their wroth on the Imperial forces. Fueled by hatred, daemons began spilling out of tears on the ships themselves.

The consequences are dire. Enraged by the loss of her knights, Baroness Sordhen took Kroll prisoner. In the Echoes of Awakening section we see that she is currently torturing the Magos for information on the device. Meanwhile, the Daemonic essences tore their way through Mechanicus forces. Pressed from all sides, the master of the Daemon host was able to drive itself into a ship’s navigational controls through the limp body of the shipmaster. Once there, it broadcast a coarse heading; as one the entire Reclamation Fleet turned their bows towards the system’s star and engaged their engine.

While the set-up and aftermath of the assault on Ordex-Thaag are plenty interesting, the pages of Engine War that are dedicated to the battle itself are at this point a touch boring. Reaper this, Volcano that, and Magma the-other-thing lance towards both forces and we hear about a lot of knights being torn down friend and foe. There have been some undeniably cool battles in the Psychic Awakening—particularly in Faith & Fury—but we’re 7 books in at this point and a lot of the blasty boom boom stuff is starting to run together.

Where Engine War is interesting is in the prelude. Secret Mechanicus sub-cults? Necron’s delivering null-tech to Magi? A pillar of assumed Blackstone being used to tear open a rift in space? With 9th officially on the horizon and the Necrons playing a big role at launch, it’s exciting to see some of these sub-threads start to wind their way through the lore. There are rumors that Blackstone is going to play a big part moving forward, and supposedly the final Blackstone Fortress expansion will also weave its way into the story.

This is the stuff that I find exciting, not 6 pages of explosions. Engine War is satisfying in that the entire book contains a satisfying arc, though it’s unclear if there will be any long term repercussions for the specific characters in this story. I enjoyed Kroll’s fate and am curious to see if the lore team expands on his story. Like in The Greater Good there was potential to take a break from the endless drum of bolters and delve into the deeper background elements. While players of the featured faction no doubt enjoy seeing their troops in battle, I hope that the final few books feature more of a meta-story.