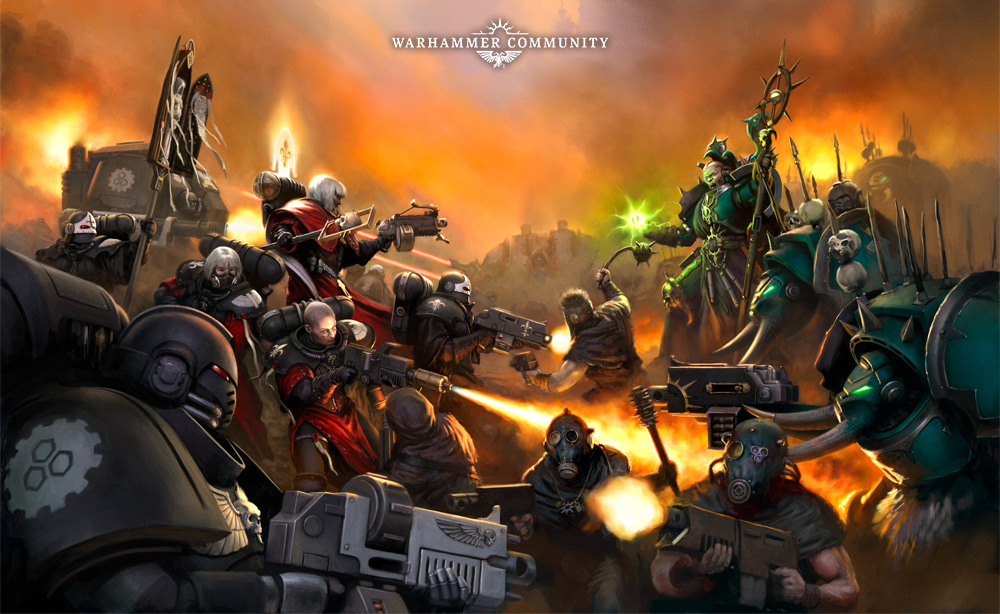 Faith & Fury is Book 2 in the Psychic Awakening story, and it comes packed with rules for various factions. We’ve covered the Adeptus Astartes, the Black Templar, and the Forces of Chaos already, so if you’ve missed that coverage be sure to check it out. Today we’re finishing our coverage of the new campaign book with a dive into the lore. Faith & Fury focuses on sinister events unfolding in the Talledus sector. Phoenix Rising set the stage by giving us a look at an Asuryani narrative and answered some questions for Eldar players; Faith & Fury feels like a story we’re all invited to enjoy.

The book opens with another prophecy, and my friends… this is some End Times shit. 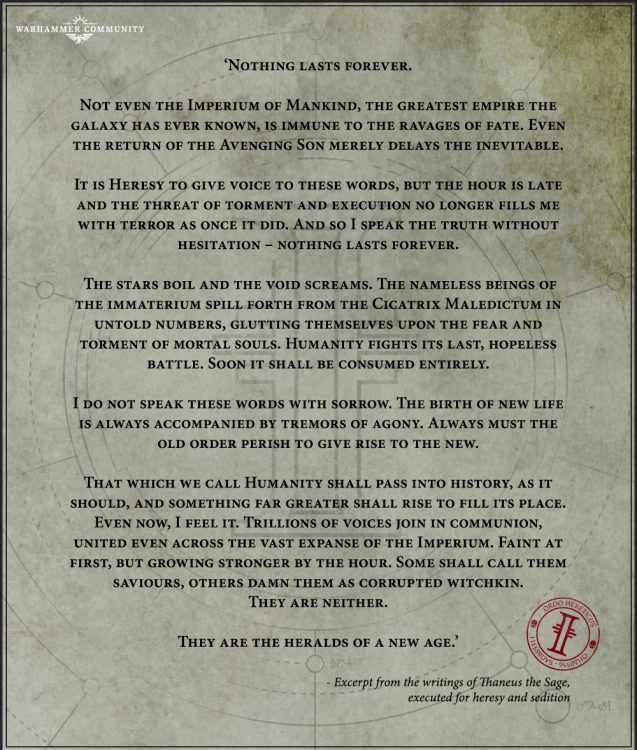 Our story begins with a history of the Talledus sytem. During Goge Vandire’s Reign of Blood, this system was the nexus for an uprising against his twisted rule of the Imperium’s Ecclesiarchy. System Governor Hectus Carmine led this uprising and was executed for his troubles by Vandire’s trusted militants the Daughters of the Emperor. They continued to impose his will on the system through blade and bolter, only bringing Vandire’s rule to an end after Sebastion Thor exposed Vandire. Upon opening their eyes to his evil, the Daughter’s of the Emperor turned on Vandire and freed his shoulders from the burden of supporting his head.

The details of this have been around for a while. In the aftermath of this Reign of Blood, Sebastian Thor imposed the Decree Passive which ensured that the Ecclesiarchy would never control men at arms again. Almost in the same breath, the Daughters of the Emperor were rebranded the Adeptus Sororitas and became the new militant arm of the Ecclesiarchy. The lesson here is to write your own loopholes so you know best how to step through them. New to Faith & Fury is what happened in the Talledus sector afterward.

Thor honored Carmine by renaming the capital of the system Benediction and building the Grand Honorificum as a monument to him. The bottomless coffers of the Ecclesiarchy poured money into the system to show the people – and the Imperium – the might of the Ecclesiarchy’s resources. The system became a shining monument to the Emperor and it’s proximity to Holy Terra made it a nexus for pilgrims. So impressive were these grand displays of faith that it was assumed this region could never fall to Chaos. This arrogance created a small opening and none other than Kor Phaeron himself stepped through.

With the vast sums of wealth and importance granted to this system came punishing and brutal Imperial rule. And in that rule, Kor Phaeron saw this as an opportunity to rot the system from the within. Ironically, he’d be able to do so without having to spread the word of Chaos – at least not initially. Instead his prophets and disciples stoked the fires of dissent, cultivating various splinter cults of the Imperial Creed. One might teach that holiness comes from humbleness and silence. Another preached that divinity could be achieved by living among an asteroid field in the system known as the Tears of the Emperor. All believed in the Imperium and the divinity of the Emperor, but each practiced their faith in their own way.

To Cardinal Morst Bolifax, this was unacceptable. An abject traditionalist, he led the Sisters of Battle and region Militarum regiments in purges of any sects he deemed to be deviants of the Imperial Creed. This subjugation would create fertile ground for Kor Phaeron to plant the seeds of heresy. His goal was to corrupt this shining star of the Imperium and in doing so, rock the Imperium to its core. So he reached out to his Traitor Legion brothers to stage a multi-pronged attack on the system.

At this point, the book splits into three primary engagements and reminds me a lot of the Vigilus books. Like those books, the narratives detail the forces fighting and some pivotal moments in the conflict. Unlike the Vigilus books, we’re left with cliffhangers that truly let us set up some battles on our tables and finish the stories ourselves. I wanted to detail each engagement in order of increasing awesomeness, but I honestly couldn’t decide what that order would be. They’re all interesting, and provide a number of narrative hooks I can easily tweak to better fit the armies I own.

Benedictine features the forces of the Word Bearers storming the planet and attempting to take the Grand Honorificum. In the wake of the Cicatrix Maledictum, psykers of all stripes have seen their powers grow. Additionally, practitioners of faith have seen their prayers take on additional power. The Word Bearers have taken advantage of this by entering combat chanting foul prayers, and making ritual sacrifice a part of their battle plan. There’s a scene in this section where the blood of flayed priests fills the moat around the Honorificum; empowered by prayer the moat bubbles, boils, and spews forth demons who tear apart the Imperial defenders.

Prayer does not belong solely to the Heretic however. Pressed back, back, back into the halls of their hallowed temple the Imperial Guard and SIsters – buoyed by Salamander forces – never allow their faith to waver. Also heightened by the Psychic Awakening, this faith manifests in a blinding wall of holy light that repels demon and Chaos Marine alike. The story ends with the balance teetering between these massive displays of faith. Faith and Fury includes two narrative battleplans; one of them is this stronghold defense. It features Sisters defending the walls of a sanctuary with Space Marines dropping in from reserve behind the walls. Perfect for me to play at home, given that I’m planning to combine the forces of my new Sisters of Battle box with my Dark Imperium marines. 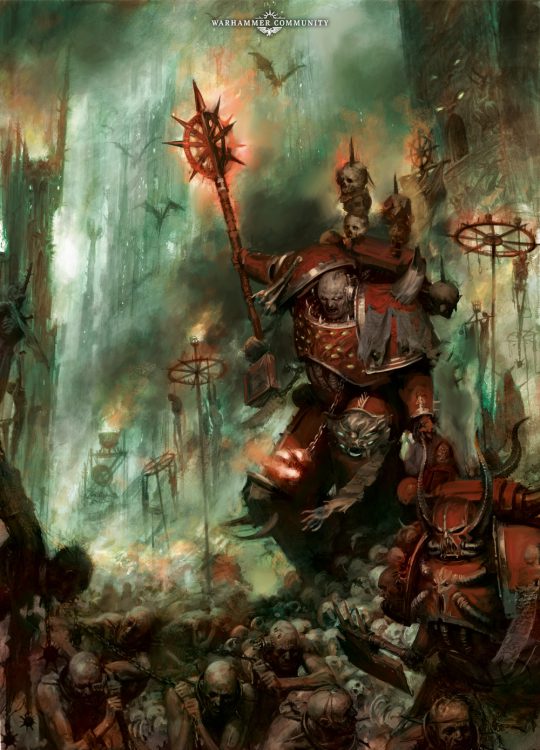 Elsewhere in the system, the Iron Warriors face off against Imperial defenders and a force of Black Templars. Warpsmith Etrogar cares little for the heretical schemes of Kor Phaeron but he does see this as an opportunity to test out his new Daemonforge. This space station-sized monstrosity plunges biomechanical pseudopods deep into the crust of the planet. Once embedded, they tunnel through the earth and emerge on the back side of fortress walls. That’s when the fun begins. These massive tendrils are capable of disgorging Infantry and Armor alike. With Venomcrawlers and Marines wreaking havoc inside the walls and Chaos Knights outside, the Imperial forces are hard pressed. The arrival of the Black Templars is welcome relief. A squad deploys Kill Team style into the heart of the massive structure and…well I’ll let you read what happens to them yourself.

Like the battle on Benedictine, this conflict also has a corresponding Battle Plan. Chaos forces deploy in-between an Imperial front line and building Stronghold. The Imperial forces have some interestingly shaped deployments, giving the Chaos player some interesting decisions to make. The Chaos deployment area doubles as a site for reinforcements to arrive via subterranean pseudopod.

Tears of the Emperor

If I had to pick a conflict that was the most badass, It’d be this one. Tears of the Emperor features the Night Lords preying on Imperial ships they’ve dragged into the asteroid field by creating an entire ship of living, tortured psykers whose warp screams distort reality and the warp (Editor’s Note: A neat callback to the Void Stalker novel). This unholy beacon lures and pulls unsuspecting ships into the asteroid field where waiting Night Lords pounce. Curze’s sons are opposed by a few White Scar battleships who engage in their own cat-and-mouse game through the asteroids. While there’s no battleplan for this conflict, I love the narrative presence of this conflict. I can imagine the Orks pulling some sort of similar trick, only perhaps their ball of psykers simply detonates instead of pulling ships out of the warp. 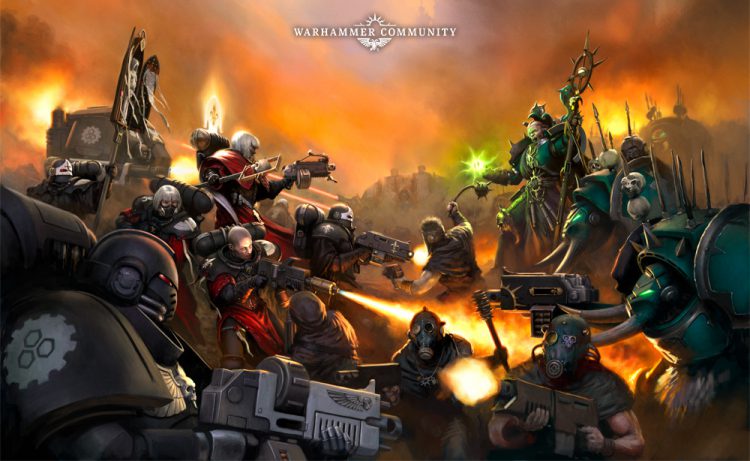 The final section of this book is a couple pages of brief paragraphs giving glimpses of what else is going on in the galaxy. A squad of Ulthwe warriors set fire to Imperial forces. Emperor’s Children gather, a Black Ship sees a series of internal system failures before communication cuts-off, and more. I expect that most of these are simply vignettes that won’t immediately receive books or stories but I also know that these often provide seeds for future Black Library novels or campaign events. I’m currently testing my own burgeoning Psychic abilities by attempting to will the paragraph about Spears of the Emperor departing on a crusade against an enormous mass of Orks into a full novel. Mr. Demski-Bowden if you’re reading this… please.

Ultimately, the narrative of Faith & Fury is awesome even as someone who doesn’t currently play Imperial or Chaos forces. The focus on a number of system conflicts instead of a single race’s narrative thread means I can more easily take inspiration for the forces I do have. The Echoes of Awakening section is also just fun to read; there’s a lot going on and this book helps flesh out the Psychic Awakening.