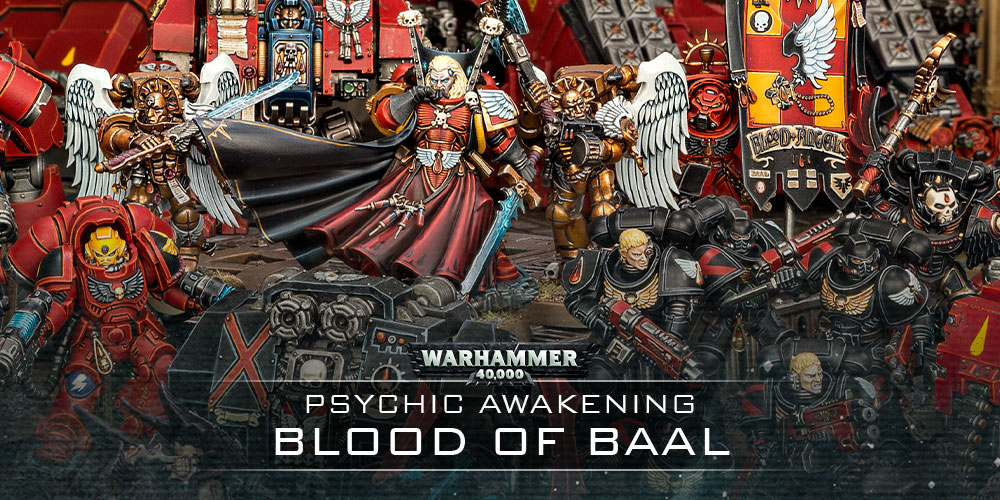 The dawn of Warhammer 40,000’s 8th edition brought with some unfortunate news for the sons of Sanguinius: the largest incursion of Tyranids that the Imperium has faced to-date was found to be swarming directly towards Baal. If you’re read The Devastation of Baal by Guy Haley, released in 2017 alongside 8th Edition you’ll know some of the details. Blood of Baal – the 3rd book in the Psychic Awakening series – recaps the major beats and then launches the beleaguered Blood Angels into four new conflicts related to the Psychic Awakening. 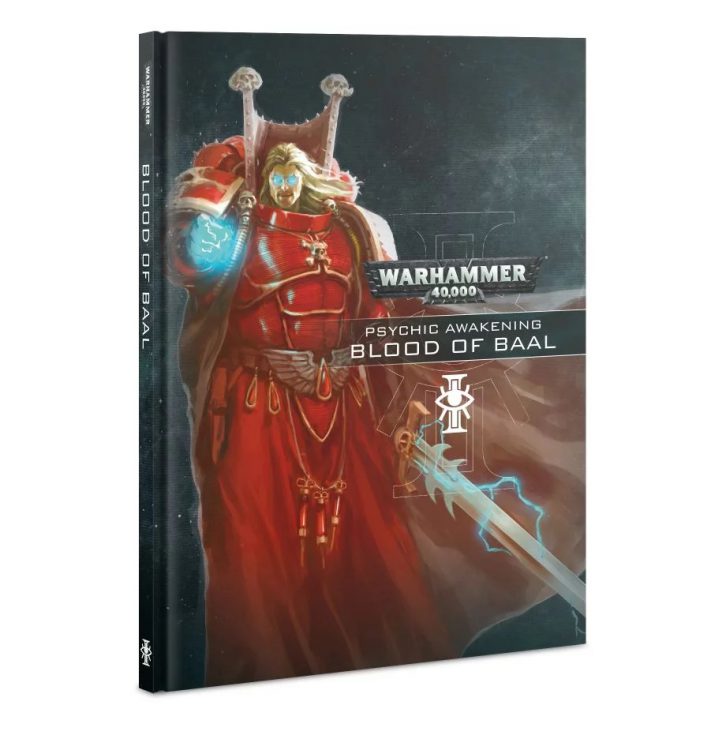 Baal is located in a region of space known as the Red Scar. Just prior to the opening of the Cicatrix Maledictum, a single distress call keens out of the Cryptus system. The Blood Angels respond in an attempt to save the planet but it’s too late. Dante is forced to make an alliance with a recently awakened Necron dynasty; together they activate an old Necrontyr weapon that creates a pillar of flame that lances out into space, wiping out a swath of Tyranids (and the planet). These events were previously covered in the Shield of Baal campaign books that released in 7th edition.

Back on Baal, the Blood Angels regroup. Dante puts out a call to the Blood Angel successors to stage a valiant last defense of their home planet. Things look grim when the Rift tears the skies open, swallowing a large part of the Hive Fleet Leviathan tendril. At first the citizens and marines cheer, with some going so far as to believe that the Rift was the universe responding to the concentrated psychic power of the Tyranids.

Despite the disappearance of a large portion of the fleet, there are still plenty of xenos left to fight. The Blood Angels continue their defense, bolstered at the last-minute by the arrival of Roboute Guilliman and his Indomitus Crusade. With the addition of Primaris marines, the Blood Angels and their brother Chapters are able to push back the Tyranids long enough to stabilize and create a plan. At this point, the book shifts gears into the Psychic Awakening story line.

As we saw in Faith & Fury, the rift brought a enhancement of psychic energy and manifestations – for better and worse. The powers of demons and warpspawn were enhanced, as were the manifestations of prayer among the faithful. Things are no different in the Red Scar sector. The Shadow in the Warp – the wave of psychic disruption that precedes Tyranid invasions – has also become stronger. Blood Angel marines see dark tidings across the sector: Guardsmen smash their heads into walls to escape the scratching in their skulls, Skitarii bleed oil out of their whatevers (cloaca?), and other grim effects of malevolent psychic energy make themselves manifest.

In addition, the presence of the Rift prevents the Black Ships from picking up burgeoning psykers. In their absence, Chapter Librarians have to step up and start screening the populace but they can barely keep up. The sheer crush of refugees makes it near impossible to catch everyone, and it stretches the Marines thin. In response, the Tyranids ramp up their deployment of psyker-beasts and wreak havoc on battlefields across the sector.

Once things calm down (relatively), Dante gathers his allies and lays out his plan to reclaim the Red Scar before crusading outwards to help the rest of the Imperium Nihilus. He personally leads the Blood Angels to Kehru, a nearby desert world used by the Angels as a monitoring station. A vanguard of marines (made up of the units you’d find in a Shadowspear box) strike first, joined by newly Primarised Mephiston. They draw the Tyranids away from the fortifications at great cost.

Their attack first aims to disrupt the Tyranid attack plan, and draw them away. The Tyranids give chase, as expected. However as the vanguard retreats tactically the Tyranids reveal their own ambush. During this counter-attack, Dante descends with his troops, pinning the Tyranids between the vanguard and himself. This section is mostly a straightforward battle, however it’s important because it reveals that the Tyranids still have coordination and leadership; the disappearance of the fleet in the Rift may not have cut them off completely from the Hive as had been hoped.

While Dante assaults Kehru, the Flesh Tearers deploy to Ashallon, an industrial planet. This is one of the 3 “Points of Grace”; these are critical targets designated by Dante as top priority in the reconquest of the Red Scar. The capital is described as a large city “reaching out with questing tendrils” towards a major refinery, which is both ominous and ironic given the current situation. The Flesh Tearers’ navigators feel a slick oily presence that comes with dark visions as they approach Ashallon.

They meet resistance in their dropships, but when they get to the ground things are quiet. Marines begin to fall to the Black Rage as they explore the area, and while it isn’t made explicit it certainly feels like this is due in part to the energies of the Psychic Awakening or at least the Tyranids’ response to it.

When they finally approach the refinery they’re attacked by flying Tyranid beasts who emerge from the refinery, along with a ground ambush. Marines are shredded, saved by a force of Imperial Air Force pilots who have been holding on in a fortified air strip (‘Nids confirmed for Aeronautica Imperialis?). Inside the refinery the Flesh Tearers find a large biomass that has consumed various Astropaths and absorbed them into its bulk. It was this creature that was warping the minds of the Astropaths and spreading a psychic taint through the sector.

The Gamma IV System is listed as the 2nd Point of Grace in Dante’s plan. While the lore mentions a force of Blood Angels striking out to reclaim it, the details of this mission are rather ominously missing from Blood of Baal.

Captain Sendini of the 5th company strikes out for the 3rd Point of Grace. Bhelik Alphus is another nearby planet, and the 5th Company keys in on a key fortification near the docks. There are defenders garrisoned in the port, keeping the Tyranids out. Reports of seismic activity are given but with everything else going on, it can’t be investigated too keenly.

Sendini leads an expert assault. He draws the Tyranids into the port by having the garrison abandon it. As the ‘Nids charge in, the Astartes trap them in a killing field of cross-firing bolter shells. Right as it seems like they’re on the cusp of victory, a gargantuan Psyker Beast emerges from the ground revealing a massive network of burrowed tunnels. Human soldiers start to scream, dying due to the sheer psychic energy emanating from the beast. Genestealers erupt from the buildings, breaking cohesion and shredding Marines left and right.

The book closes with another Echoes of Awakening section, which is a series of paragraph-long vignettes that act as teasers and mood setters for the Psychic Awakening. While there isn’t anything as exciting as the Emperor’s Spears riding out to face a growing Ork Waaagh, there’s some general creepiness. Seems like the Skitarii are not handling this whole event very well.

Like Phoenix Rising, this book is focused on faction-specific stories making it a must-buy campaign book for Tyranid and Blood Angel players. Those of us who aren’t can still enjoy the expansion of a major plot point for the Blood Angels and the continued fleshing out of the Psychic Awakening. The storyline feels like it’s picking up a lot of momentum now, and I’m pumped for what’s coming next.