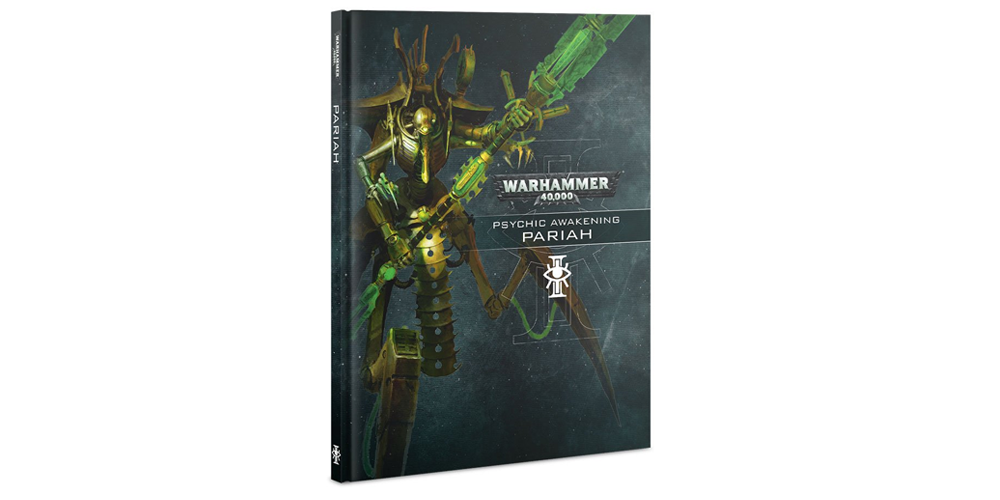 With Pariah, the grand 9-book saga of The Psychic Awakening comes to an end. Every faction has had its day in the sun with new rules and some lore highlights. It’s been my role to take a look at the lore for every book in this series. I’ve enjoyed it for the most part, though some books shine a little brighter than others.

Unlike the other books, Pariah pulls a double duty. It not only closes this particular series of books; it also ushers in the new developments that kick off Warhammer 40,000’s 9th Edition. Necrons are poised to be the major Big Bad for this edition—or at least initially. The Death Guard opened 8th Edition as a major threat before taking a back seat to general Great Rift badness.

Pariah opens with the opening of the Great Rift and takes us all the way back to events from early in 8th Edition. The days and weeks in the immediate aftermath of the Rift’s opening are known as the Noctis Aeterna. It was a period when the light of the Astronomicon was completely snuffed out. Worlds were cut off from the guiding light of Terra and psykers were assailed by threats both physical and ethereal.

As humanity emerged from this period, a few astropaths began to notice something more terrifying than the screams and energies of the warp: silence. All souls cast their light into the Warp and sensitive psykers could even hear folks empathic screams from across the galaxy, yet one region of space was devoid of anything. No sign of life. No calls for aid. No screams of help.To many this was almost more concerning than the waves of psychic pain. What could cause an entire region composing multiple sectors to simply disappear?

Guilliman launched multiple fleets as part of his Indomitus crusade and one was sent in the direction of this anomaly. Led by Groupmaster Marran, Battle Group Kallides was dispatched to specifically investigate this Zone of Silence. In this retelling we’re treated to our first sign that something is desperately wrong as the group approaches the Niphilim Sub-Sector. Planets are found in open revolt and/or warring against Xenos factions; not in an attempt to maintain a hold on their planets but in a desperate attempt to get away. It reminded me of the first book in The Beast Arises saga.

As the Battle Group enters the Zone of Silence, they’re joined by Ephrael Stern and her Adepta Sororitas sisters. Within the Zone, the bad news continues. Astropaths report that the Warp is completely stilled beyond the boundaries of this zone; initially a cause for celebration that quickly disappears as ships are unable to sail through it, like a stilled sailboat on a windless day. Geller fields pop and collapse, yet no demon’s follow. Worse still are the planets; they’re found with rotting food left on tables yet no people around.

Despite only minimal signs of battle, entire populations have simply vanished. Exploratory forces and troops report feeling like they’re being smothered. Guardsmen give up and collapse, unwilling to move or march. Executions reach epidemic levels. Even Space Marines are affected. 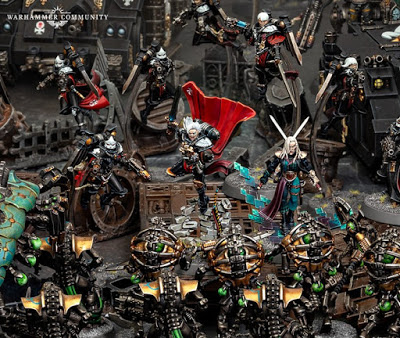 The source of this effect is a massive system-spanning network of Blackstone pylons created by the Necrons. Acting as a sort of Faraday cage for warp energy, these pylons still the energies of Chaos and cut humanity off from their powers. The pattern of this network is described as “non-Euclidean fractal crypto-logic” (which also describes my upcoming whitepaper on a new blockchain based decentralized currency) and its sheer size and scope makes it difficult for the Imperial forces to assault it.

The first major battle occurs on Mesmoch. A force of Ultramarines is deployed and continues to find evidence that humanity has simply given up and disappeared. Little life remains. Eventually they come across one of the giant Blackstone pylons and at that moment the Necrons reveal themselves; they’d been monitoring the advance the entire time waiting for their opportunity to emerge from their portals and gateways and begin the fight.

We’re treated to the rare spectacle of the Imperium getting its ass absolutely handed to it. Marines are routed, Guard are destroyed, even a Titan is almost wiped out. The battle group barely manages a fighting retreat, and even massive orbital bombardment is unable to scratch the pylon.

Following this battle is the first major assault of the Sisters of Battle, led by Ephrael Stern. The assault is on a network of gateways that the Necrons are using for reinforcements. Imperial forces are forced to march up a main route leading to a Necron complex that quickly becomes a killing field. It is here that Stern unleashes her full holy and righteous fury. Buoyed by her display, the Sisters and Guard lead the charge and overrun the Necrons. It seems as if faith—not might and power—are what push back the stilling effects of the Blackstone pylons.

After regrouping, Marine forces begin relying on their Chaplains more than ever. They, along with preachers and leaders of other forces, whip the force of faith through the Imperium forces. Hoping to salvage this fleet’s expedition, Inquisitor Draxus leads a strike force with Stern onto Tredica, where they deliberately spring a Necron trap. Their target is some computer terminals at the heart of a Necron complex with the goal of extracting any information they can. After fighting through a few paragraphs of battle, they find themselves staring into the eyes of a bound C’tan whose power is being harnessed by the Necron to power their machinery. Desperate, Draxus frees the entity. 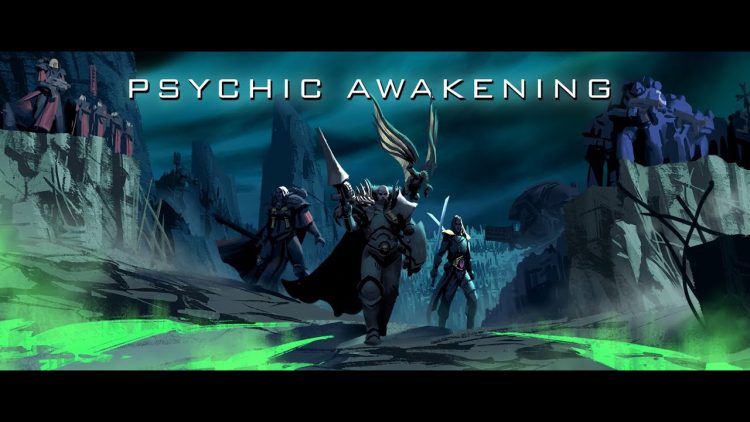 It points its finger at her and her comrades and the humans find themselves transported to the bridge of their cruiser, before the C’tan begins unleashing its fury on its captors. Our story comes to a conclusion on the very last page of the book, tucked behind some art. It’s similar to the final page of Phoenix Rising which kicked off this Psychic Awakening adventure, and is not the only thing that ties these bookends together. On this page, we see Draxus decoding the information she obtained and discovering that the Pariah Nexus is only 1 of many such null zones under the direction of the Silent King.

As part of the Psychic Awakening series, Pariah may be my favorite book. It doesn’t have any of the downright cool manifestations of psychic energy that Faith & Fury has (quite the opposite, actually) but it absolutely has the best overall mood. The revelation of information as we follow the fleet into the Pariah Nexus is slow and haunting, and the overall defeat of the Imperium and imagery of a galaxy-spanning web of Pariah Zones does a fantastic job of leaving a feeling of doom hovering over the galaxy.

As a 9th Edition kick-off book, I’m less enthused by Pariah; however, that’s not due to the merits of the story. I like this development and hope to explore this Necron threat further; I wasn’t initially going to pick up the Indomitus book but am now interested to read it. The reason this falls flat as a bridge to 9th is an unfortunate reality of the situation we’re in. Due to the ongoing COVID-19 pandemic, it’s hard to know what GW initially intended for a narrative reveal plan. The very last page of this book is an epilogue that ends in an ominous reveal that the Silent King has returned, yet we already knew that due to a model reveal. We’ve seen the launch trailer that includes a Sister’s display of holy faith as a potent element of battle, so that part of Pariah doesn’t hit as hard—especially since Indomitus doesn’t include any Sisters.

Ultimately, Psychic Awakening ends with a book that provides what I wanted out of every book: mood. The bulk of this series was just descriptions of factions shooting and hacking at each other, seasoned with images of Cool Psychic Stuff. Pariah is far from that. There are battles of course, but they serve to move the story along not be the entire story. It opens with a haunting passage from a doomed Astropath. We’re fed bits of information that slowly build an oppressive mood that culminates in a reveal that things are going to get much much worse for the Imperium. This is the narrative I love to see in GW’s companion books. I can handle the battles on the table, that’s what my minis are for. Pariah sets an environment and a tone that I can carry to the table, and ends the Psychic Awakening on a high note.