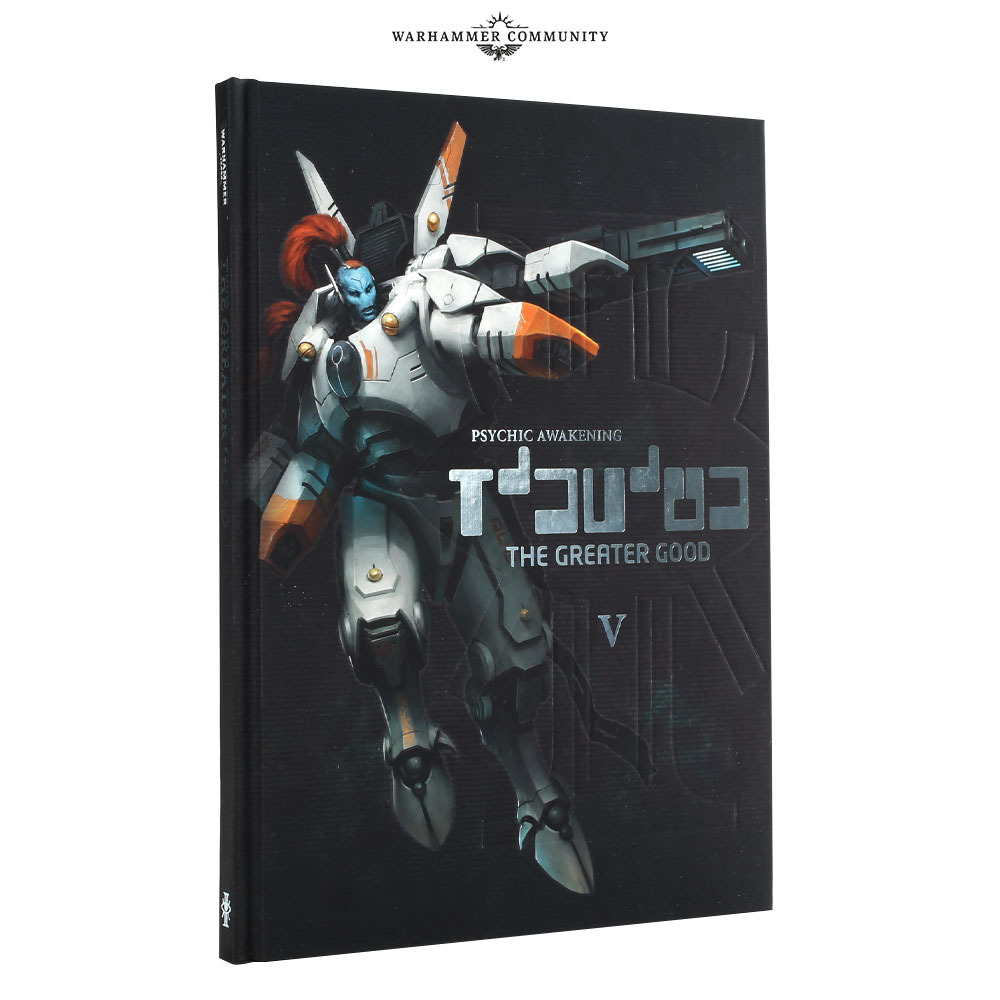 From a lore perspective, this is the book I was looking forward to the most. The Imperium is a brutally fascist authoritarian regime that doesn’t so much care about its citizens as it does their labor. The conditions it imposes upon its people make it ripe for the populist rhetoric used by the Genestealer Cults to recruit followers and swell their numbers. The unfortunate irony about these xenos cults is that the best thing the Imperium could do to stop it would be to just care a little bit about the humanity of its citizens; you know, maybe chill a little bit on galactic domination and make sure Ma and Pa Citizen have… food. That same indifference towards its people also helps the Tau in their proselytizing of the Greater Good. This is a book ripe with potential.

Psychic Awakening: The Greater Good puts these three factions front and center and forces them into conflict. The Tau’s 5th Sphere expansion spreads into Imperium space where its assaults are opposed by the Imperium’s human fighting force: the Astra Militarum. Unbeknownst to these factions, the revolutionary forces of the Genestealer Cults had begun chipping away at the planet’s defenses long before the Tau appeared on the scene. So what happens when these ideological foes make contact with each other? Violent conflict of course.

Our battles take place in the Chalnath Expanse. These systems were already under civil war and dealing with insurrections in the wake of the opening of The Devourer of Hope – the Tau name for the Great Rift. The Tau, reeling from an assault on the Startide Nexus by the Death Guard, continue their 5th Sphere Expansion into this area of space. While their forces are bolstered by the discovery of survivors from the 4th Sphere, those survivors exhibit a brutality not previously seen among the Tau. Commander Shadowsun is troubled by reports of these atrocities, but doesn’t slow their advance. Like previous Psychic Awakening books, The Greater Good focuses attention on some specific battles within the greater conflict. Each gives one of the featured factions a chance to shine.

Commander Shadowsun herself takes to the ground on Astorgius. Despite the diplomatic efforts of the Tau Water Caste, the leadership of Astorgius presented 5 severed Tau heads to Shadowsun. On a platter no less. This grave insult was to be returned with fury and pulse weaponry, though Shadowsun decided to wait a number of months for her insurgent forces to continue to work behind the scenes. Water Caste agents reported a fractured leadership, with splits rising across political factions. Troubled reports of cult activity worshiping multi-limbed gods in the underhives also made their way to Shadowsun, though the Tau chalked it up to genetic mutations.

Shadowsun directed her forces to engage in guerrilla warfare. Insurgents activated and assaulted strongpoints. Kroot Carnivores worked with Breacher teams to strike at human forces holed up in bunkers. Across the planet Shadowsun notched victory after victory, never giving the Imperials the opportunity to claim a victory of their own. The goal was to break the morale of the human forces; it’s a goal that continued to elude her. Bolstered by a number of “miracles” due to the energies of the Psychic Awakening, human morale never faltered. In fact, human forces fighting for the Tau were instead likely to fall to insanity and revolt. In response, 4th Sphere forces continued their brutal retribution, attacking human prisoners and allies alike.

Shadowsun’s next move was an attempt to break the morale of the Imperial forces with a single determined victory. She identified Iglesor Magna as the greatest cathedra-city on the planet, and assessed that the fall of this city would bring an end the human resistance. Stiff resistance was expected, and yet Tau forces advanced all the way into the prime cathedral itself before the defenders finally revealed themselves. Peeling back frescos and other ceremonial adornments, Tau were cut down in waves.

Again miracles continued to inspire the Militarum forces to great acts of valor, and even worked to inspire the Tau’s allies to strike back at the Tau. Torture and brutality continued to mount, even forcing Shadowsun to pull back some of her forces. Despite this, victory eventually came, when a cadre of Crisis Battlesuits led by Shadowsun herself took to the field and broke the Imperial defenders. Victory was projected across the planet, and Shadowsun smiled knowing that this would end the conflict. Only… it didn’t. Humanity’s faith never left. Could this have been a result of the effects of the Psychic Awakening? Shadowsun didn’t know, but she did know that the battle would continue. 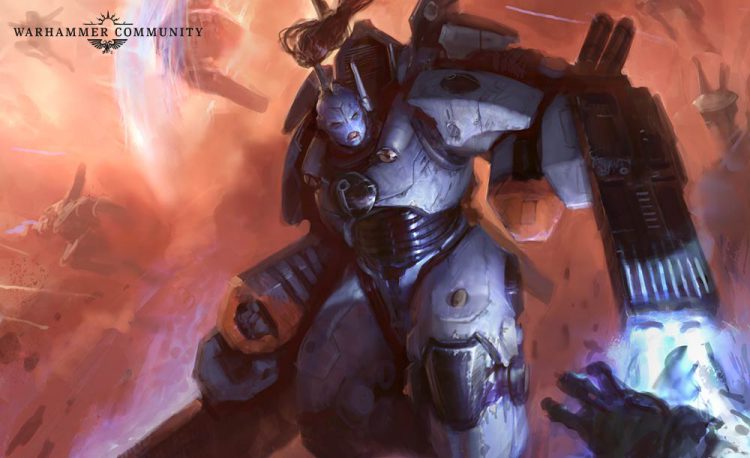 In the Pekun system, the mining planet of Haephos saw a surge in mutants and Chaos cultists. The Daemon Primarch Magnus’ influence is seen here, as many of the cultists are found to worship The Red Monarch and the “One-Eyed Liege”. Some go so far as to put out their own eyes. As we’ve seen in previous books, the opening of the Rift and the subsequent surge of psykers has created a massive logistical issue for the Black Fleet; those ships sent to round up young psykers for containment or for being fed to the Emperor on this throne. When they failed to arrive on Haephos, Governor Hatiar decided to offer burgeoning psykers an amount of freedom in exchange for hunting cultists.

This worked tremendously well. Cult after cult was cut down down and eliminated by the combined might of the Astra Militarum and these psykers. Eventually they were sent to exterminate a mutant cult in the vast sub-continental tunnel network of the planet. Victory seemed assured; renegade mutants practically ran into the Guard forces’ open arms. Things seemed too easy. Unfortunately for the planetary forces, a greater foe lurked in these tunnels.

Atalan Jackals, Achilies Ridgerunners, and more mobile Genestealer Cult threats emerged from the tunnels with an alien focus on a single goal: get off the planet. These forces surged forth, torching human and tank alike. Using their knowledge of the underground network they devastated the Imperial forces. Victory was not theirs however, as the Guard rallied and destroyed the colony. Owing to the ferocity of the initial assault, though, the Governor ordered a retreat rather than a complete purge, choosing to believe the threat was eliminated.

Unfortunately, it wasn’t. Uprisings across the planet broke out, all focused on starports. The greatest battle would occur for the docks of Eletryrio. This city-sized starport saw months of battle as xenos and human alike fell to bullet or blade. The city became a charnel house of blood, as open fighting and explosive traps claimed victim after victim. After months of battle the Governor would finally declare victory. The costs were massive; entire Guard regiments fell to the taint of the Genestealers and had to be put down. Unfortunately there was no rest for the weary; just as victory was declared a Tau force appeared on orbital scanners.

Their Faith will carry the day. Credit: Games Workshop

The largest force on Vorotheion was the cult of the Pauper Prince. Generations of cultists had infiltrated the governmental structure at all levels, though when the Tau arrived they had to accelerate the date of their uprising. The Tau represented a physical and ideological threat. Tau preaching of The Greater Good threatened to undermine the work that Princes had done to sway leaders to their cause, and the cult found themselves having to use psychic power to dominate the elite. Luckily, the Psychic Awakening provided far more Maguses than usual.

In the underhives, cult preachers began to recognize how similar the T’au’va was to their own scriptures and used these similarities to subvert the work of the Water Caste. A tense alliance was even attempted, though the Tau quickly rejected these peaceful overtures leading to the outbreak of military conflict. Tau forces were caught unaware when they discovered that their work to create allies had been subverted. Gun emplacements they’d hoped to rely on had given themselves over to the Princes, not to the Tau. While a landing was finally made, the Tau found themselves hard-pressed and lacking allies. The continued brutality of 4th Sphere survivors didn’t help.

The critical battle on Vorotheion was over a generatorium, but at this point the battle description starts to blend in to the rest of the book. The standout elements of this battle seems to be the enhanced powers of the Maguses of the cult. Where they battled, humans and Tau alike turned their guns on each other or went mad. The generatorium eventually fell but of course war is eternal and conflict continues to rage on Vorotheion. 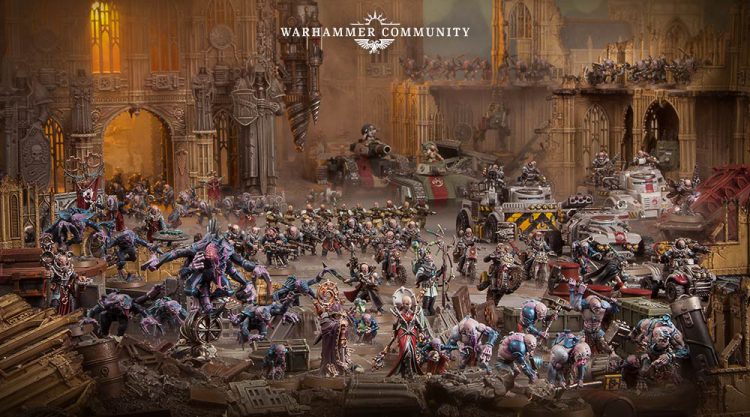 Comin’ for your hearts and minds. Credit: Games Workshop

To be honest, The Greater Good was pretty disappointing. By choosing these three factions to go to war against each other, Games Workshop set up the potential for a book that was as much about ideological conflict as it was military conflict. The battle for Vorotheion touches on it a little bit, but it hurriedly moves past it into the military conflict. I get that this is a galaxy at war with lore that supports a wargame, but this is also a campaign series that will stretch 8 books. Is it too much to ask that the battles in one of them be less about physical violence and more about the hearts and minds of the population?

Coda mentions in his thoughts on Ritual of the Damned that there’s a missed opportunity to engage with Magnus’ attempts to bring the outcast psykers home. There’s a similarly missed opportunity here to really engage with the political elements of the Cult and the Tau. I don’t just want to read a couple sentences about Cultists having to navigate the similarities between their preaching and the T’au’va, I want an entire segment about it. I would have loved to see an expanded section showing Clamavuses fighting Water Caste forces with words rather than bullets. It may be unfair to expect this in a small supplement book rather than a full on novel, but I’m not the one who decided to pit these forces against each other. If it was just about the battle, GW could have pit the Tau against the Death Guard and expanded on the opening section of this book.

It may be unfair to judge a book on its potential and not what was actually presented but honestly the battles aren’t that much better. In Faith & Fury we saw the prayers of the faithful create a physical and holy wall that incinerated demons at the touch. In Blood of Baal, we saw a Lovecraftian horror take over the minds and bodies of an Astropathic Choir and blackout an entire sector. In this book, we get three sieges that play out fairly similarly and the only Psychic Awakeny weirdness we get are some Maguses making people go crazy and a chainsword-wielding Guardsman that flies Rocketeer-like into some Tau.

With this book, we’ve crossed the halfway point of the Psychic Awakening. For the most part, the events and happenings detailed in each book have been an entertaining read and I really like the narrative battle plans that let you play out the battles. Tau, Guard, and Genestealer Cult players will almost certainly enjoy their moment in the spotlight but as a neutral observer the lore in The Greater Good was just OK.