Much like the models featured I’ve decided to follow the trend of posting a hobby retrospective, only done hastily. First up I’ll cover the gaming aspect of my year, both in Age of Sigmar and Warhammer 40k, followed by a month-by-month image dump of some of the stuff I’ve painted. I’ve got a single image with almost everything in it that’ll be the catch-all for everything as I didn’t individually and lovingly photo all my stuff and a lot of it is now boxed away in the cold, dark depths of my garage.

Nah…t gonna lie, I painted a lot this year, also by year I mean from the middle of December last year to the middle of December this year. You can see the group shot above in case you fall asleep before the end, and at least I can show off this bit before that happens. It doesn’t include the Idoneth Deepkin Thralls or any of the Warhammer Underworlds war bands that I painted because the former were painted 2 days after this picture and the latter were given away as gifts. All in approximately 300 or so models total in the last 12 months.

Now for the monthly breakdown; the mental breakdown may have occurred around September.

At the end of December last year I decided to paint a couple of Nighthaunt models that I had sitting around from when I bought Soul Wars earlier in the year. This of course meant going out and buying more stuff before even painting any of the actual Soul Wars models, it was also an excuse to widen the net to a “Generic Death” army because I really like Skeletons and Start Collecting boxes.

By my count that’s 50 models with the 4 Heroes.

January ended up with our Discord’s first painting contest, the Darkoath Chieftain, he’s one of my favourite painted things from this year:

Fun fact, that guy has every single “Edge Paint” (rip) on it and while messing with the rotting corpse colours I came up with the idea for February’s project…

The corpse from the Darkoath model led me to find a really easy Nurgle flesh colour scheme, it’s basically my pre-contrast contrast mixture of strong coloured paint thinned down to oblivion over white. In this case I think it was a mix of Biel-Tan and Agrax over Death Guard Green primer.

The Sorcerer is just the standard Slaves to Darkness Chaos Sorcerer with a Blight Kings head swap and a few bells and whistles added (hurr). The guy on the left is a converted Genestealer Cult Abbarant, and the other guy is Beasts of Chaos Ungor (all from box sets I’ve not painted).

Needed some battleline units, so I painted up some trusty Plaguebearers (and the Herald/Poxbringer)

In case you’re looking at the pictures and thinking “How do I get green slimy bases?” worry not, I documented it here in on of our HTPE articles: How to Base Everything: Slime.

I painted up some Beasts of Chaos marked a Nurgle too, here they are pictured with the rest of the gang (The Chaos Warriors and the Blight Kings are from last year)

That was it for February, and March apparently as I didn’t do anything that month.

April had me carrying on with the Nurgle theme, only this time Nurgle with guns as I’d decided to paint some more models to add to my tiny Death Guard Kill-Team. First up was a colour scheme test to make sure I could still reasonably match the ones I painted last year.

The new scheme is a bit stronger in tone but it looks ok for the low effort.

I painted up the Spindle Drones from Blackstone Fortress in a rusty matching scheme to hover around the Bloat Drone.

And a new Lord to lead them

The Death Guard kick carried on into early May.

Started May by ending Death Guard, the final model being the Bloat Drone (a repaint of the one I did in 2017).

By Star Wars day (May 4th) I’d pretty much done with Death Guard, so here’s the group shot:

By the end of May I was painting red things, and my first baby knight:

I also repainted my all time favourite model (the Lady Stormcast model) in a more standard colour scheme than before, and while repainting her I went back and re-did an Ork Warboss at the same time.

With Contrast(tm) on the horizon, I’d decided to set myself random speed painting challenges by getting people to vote on what Space Marine chapter to paint that evening. First up was a Blood Raven, the 90 minuter.

I also painted Inquisitor Greyfax to try and pull off the elusive candle glow effect, I may have gone OTT here, but I liked the result

Contrast came out after I painted Greyfax so I immediately decided to brush paint the worst coloured Space Marines (in terms of brush painting anyway), the Imperial Fists, here’s a group shot of the Iyanden Yellow boys (with Dorn highlights)

and a lone Reiver

The rest of the Speed Marines

While painting them I watched the LotR Trilogy, ultimately that was a mistake as it meant buying more stuff

Shame the Ent models are so bad, maybe I’ll just buy one of those Sylvaneth Trees…

What’s that? Cities of Sigmar is coming soon, complete with Living City rules… well ok then…

The last model for the City was a “Stormcast Knight-Azyros”, so I converted one up from a Dryad and a Chaos Furries dude.

Back in action, two months off means painting random things to get back in the groove. First up was a Skaven Warplock Bombardier

These guys are missing from the group shot, but if I ever do Slaanesh themed guys they may return.

I painted one guy from Feast of Bones, because I got distracted with the impending Sisters release.

My Secret Santa gift this year was an awesome one, the Idoneth Deepkin Eidolon. Challenge was to paint him in a day. Challenge accepted.

Just in time for December…

My SoB Battlebox arrived at the end of November, but I’m bundling it in with December because I tried to paint the whole box in a week. I got really close (never did the Seraphim). Here’s some of the models: 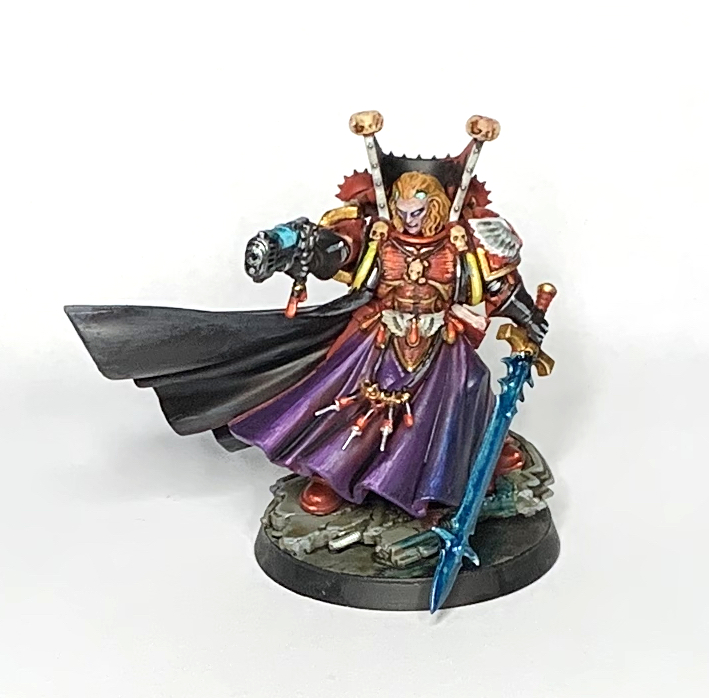 It’s getting even more random now…

And a couple of speed painting challenges to end the year..

and finally an attempt at a Contrast 30 minute model (this came out really well for 0 effort, and will be the basis of my scheme when Mortal Realms launches next month).

300 models is a lot of models and going over the photos was quite scary, I seriously doubt that I’ll be able to do that amount again, but then this year I didn’t expect to either, but then as they say “Hindsight is…

Next week is the new year, and ironically I may have played more games by the 3rd day of the year than models painted as we’re having a get together at Warhammer World. In terms of hobby related plans I did grab a copy of Wrath and Rapture so I can paint up some Slaanesh models (I’m especially looking forward to the Infernal Enrapturess).