Ritual of the Damned Review Part 4: The Lore 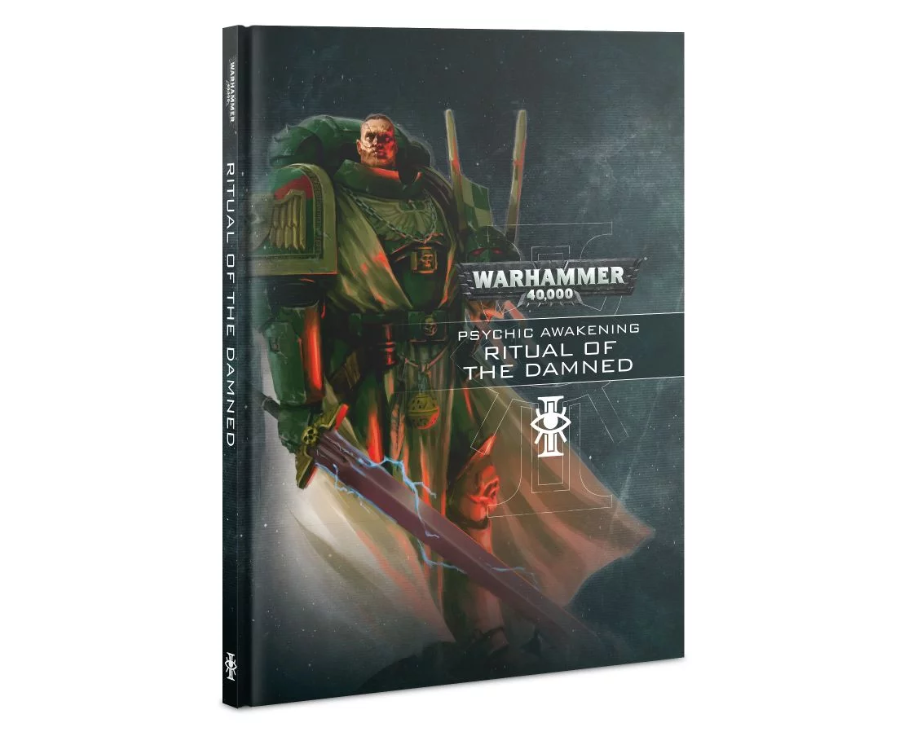 We’ve seen so far how the Psychic Awakening is enhancing latent psychic abilities across the galaxy. Prayer is more powerful, demons are surging, and Librarians from all Chapter are finding their abilities strengthened. So what happens to those who are already powerful psykers? What could one of the most powerful psykers in the universe do under such circumstances? Ritual of the Damned pits the Grey Knights and Dark Angels against Magnus and his Thousand Sons and gives us a peek at what the Crimson King is up to.

The action in Ritual of the Damned takes place on Sortiarius, planet of the sorcerers. Sortarius has only recently returned to realspace and currently sits near Prospero. It’s on this planet that Magnus aims to complete a ritual that will accelerate and hasten humanity’s growth into a psychic race. This is something that Magnus has been working towards for a long time and part of his plan to build an empire in his own vision.

Among his first steps is to channel the psychic energies into a galaxy-wide call. This broadcast is one of hope and acceptance. The Imperium isn’t exactly a great place to be a psyker; if you aren’t strong enough to be useful in a few limited roles then you’re chained up in a Black Ship and fed to the Emperor to keep the Astronomicon lit. In his own way, Magnus is trying to save these souls and give them a home. It may not be a glamorous life, but it’ll be a living.

Among those who hear Magnus’ call are the Grey Knights. As the Imperium’s premier psychic warriors, the Grey Knights have been deployed across the Imperium in response to the Psychic Awakening. Stretched thin, Magnus’ call is almost missed by the Knights. When they discover what it is, they turn their sights to Prospero and Sortiarius. There, through the power of their Speculum Infernus (I assume GW is going with the latin meaning of Speculum which is mirror, and not the more modern medical usage) the Grey Knights realize that the Crimson King is gathering power and must figure out how to deploy their beleaguered forces to the planet.

The decision is made to reach out to the Dark Angels for help. Having fought alongside them on Fenris, they feel the 1st Legion can be trusted to aid them. Unfortunately, the Dark Angels’ citadel (known as The Rock) is on the wrong side of the Great Rift. In order to reach the Dark Angels, an Astropathic Choir is organized to send their message across the warp; this effort kills them all.

Meanwhile, the Dark Angels are dealing with their own issues. The Rock comes under assault by two separate demon incursions and the receipt of the Grey Knight message kills as many Astropaths as the sending. As is their nature, the Dark Angels are initially wary and untrusting. They’re concerned that this is a ploy by the Grey Knights to uncover their secrets, or that it could be a false message sent by the Fallen who are gathering in the wake of the Great Rift. They ultimately decide to send recently-Primaris’d Lazarus and the 5th Company to aid their Grey Knight brethren, though they also deploy Ravenwing and Deathwing forces to monitor the situation and ensure that the Grey Knights don’t learn too much.

Upon arrival to the Prospero System, the Marines begin to execute their plan. Knowing that the site of the ritual will be heavily guarded, the Dark Angels volunteer to attack the nearby city of Tizca to draw the Thousand Sons and their demon allies away from the Ritual. Unfortunately, it works. The Dark Angels meet steep resistance and find themselves rapidly losing forces. The fighting is almost lost when the Ravenwing and Deathwing forces deploy. This turns the tide and they’re able to hold on until they finally hear Grey Knights on the vox sounding victory and giving the order to withdraw.

Meanwhile, the Grey Knights begin their assault on the ritual and are quickly stymied by a magical labyrinth. No matter how they advance or which direction they take, they find themselves back at a center square. After many moments are futilely lost, the assembled Librarians gather their power to dispel the illusion. The amount of psychic energy is immense and it draws enemies in greater numbers. At its apex, a portal opens and Kaldor Drago emerges to lead the Knights forward.

Unfortunately, nothing gets easier. The Knights are harried, bloodied, and killed. Things are so dire they begin to doubt the Dark Angels, whispering accusations of failure or treachery. It isn’t until they’re able to claim an amplifying beacon that they realize that the Dark Angels have withdrawn; the victory order received by the Dark Angels had been another psychic illusion all along. Upon discovering this, the Librarians again band together to open a warp-path between the forces so that the Angels can join the fight. It works, though all but one Librarian is slain.

Together, the Marines are able to finally assault Magnus. When they arrive, they see a stack of bodies so high the heat is causing the air to shimmer. Magnus stands tall overseeing the ritual, while sorcerers surround him and continue their bloody work. Only an orbital bombardment will put a stop to it and so the Grey Knights are forced to withdraw while their fleet attacks from the sky. More marines die – lots of marines die in this book – and even more have to be left behind, unable to withdraw. The book ends with our named characters surviving and the ritual at least partially foiled.

Look. I liked this book’s lore.

But I wanted to really like it – Dark Angels were my OG army, so this should have been a lay up. Instead we got something only mildly awesome. However there were a few outstanding moments though that deserve praise. I’m going to expand on Raf’s excellent work and give you my brief take on each faction featured in the book and how they fared.

While there is a Dark Angel on the cover, the Thousand Sons are the real stars of this book. One of the outstanding moments I mentioned earlier is that I love the direction GW is taking Magnus. He truly is trying (in a twisted way) to provide a home for the people the Imperium have forsaken or traditionally exploited. In doing so this is actually showing the positive side of Tzeentch – hope – and you can’t help but think he may be right to do so until you remember that he is a chaos daemon prince and the method by which he is delivering that hope is massively messed up and hilariously over-the-top wrong.

However, while reading the lore in this book a question popped into my brain tube and I would ask you to  allow me to put this question to you.

Is Magnus’ one time off-ing of 999 psykers a bad thing compared with The Emperor’s 1000+ pack a day psyker smoking habit?

I honestly don’t know the answer to that, which is why I’m excited to see where Magnus takes his fledgling real space empire next. Stuff like this are the narrative beats that GW should be hitting. Sure, chaos is very bad but is the hellish conditions the Imperium subject’s people to really any better?

Speaking of the Imperium the Grey Knights come off fairly well on this tome. There is the required standard Imperium “Oh god, we are over stretched so badly, more of them are away from Titan than ever before!” but again, there is a spark of hope provided to them. The influx of psykers in the galaxy broadens the recruiting pool for the Grey Knights, providing us with that thin, silver lining of desperate hope for the imperium.

The Dark Angels on the other hand?

The Fallen and Luther are out at large in the galaxy, gathering in numbers never seen before. The rock? It’s totally on fire, like twice. This is the Dark Angels at their lowest point since the destruction of Caliban. Drastic measure are being taken, Primaris marines are allowed to be inducted into the Deathwing and Ravenwing, following in the resurrected Lazarus’ footsteps. Truly these are exciting times to be wearing the most noble of Dark Greens.

You would think that a book with these stakes, the Grey Knights, a force of literally unmatched psykers and the Thousand Sons, again a force of insane psychic might and secrets, might give us a hell of a story of the Dark Angels finally being exposed and propel their story forward. Sadly, this is where the book falls crucially short for me. That delicious story thread is tragically buried in favour of your standard Imperium vs Chaos bolter-ridden action. Don’t get me wrong, the action is incredibly serviceable and I enjoyed it. I just think there was an opportunity for something with a little more teeth that would have set the Dark Angels up for some really juicy narrative beats.

Points also have to be dished out for the theaters of war and the unique mission in the book. They seem fun and I’ll probably try to play them, so kudos to GW for putting them in. All in all I give the lore section a solid B+. Looking to the past and the future, I feel like so far the less stakes in a PA book for the status quo, the better it ends up being, which is why I’m pretty hyped for the Greater Good as the rumoured Tau vs Death Guard vs Genestealer Cults is a hell of a combo.

In all, Ritual of the Damned is a book that may do a better job by its starring factions with rules than narrative, but the story provides a number of interesting hooks and developments for the Imperium at large. Magnus’ plans haven’t been completely foiled, and there’s still the matter of the Fallen running loose. And as for the Grey Knights well, though they got new rules this time, we have yet to see what Chaos Daemons will get to boost their frightening power and how they’ll further twist the galaxy to their whims.

As always, if you have any questions or feedback, shoot us a note in the comments below or email us at contact@goonhammer.com.