Goonhammer is excited to welcome Shane Watts to the team, an accomplished veteran on the ITC circuit. Welcome aboard, Shane!

I really enjoy playing armies with janky mechanics, the stranger the better generally, however I don’t like “gotcha hammer” so usually I will explain any off-the-wall things that my lists are capable of throwing at my opponent during the game. A few of my friends have asked me why I keep playing armies that aren’t optimal, and they rightly pointed out that I tend to play “weird,” “non-conventional” lists that may “scare people” and that I “should seek help.” So fine. You win. I made my own version of a marine list. That way, I could play something optimal. But I’m still keeping it weird.

This will be my fourth year attending the Las Vegas Open and I am looking forward to seeing everyone there. I really enjoy the competitive scene and I enjoy running into and hanging out with people that I don’t see year round. I’d also like to give a minor shout out to FLG for organizing the LVO. Every year, I head down to the convention hall the day before the event and help setup tables, and every year there are more tables and players to set up for. if you’re attending this year and have time please come out and volunteer to help setup tables at LVO.

Goal: My goal for this year is to make the Top 8. As for how realistic that is, well… that’s a very good question, haha. I usually am out in the wings in the top 10 of events (although this past ITC season has been a bit rough), but with my current army choice I feel pretty good about my odds. On a more realistic note, I’d be happy with 5-1 at the end.

Prediction: I think the winner of the event will be Marines (editor’s note: Wow, really going out on a limb there, Shane). There is a good chance for Eldar or Tau (read: Brian Pullen or Richard Siegler) to take the event as well. And the Psychic Awakening rules for Chaos could make them a dark horse candidate. 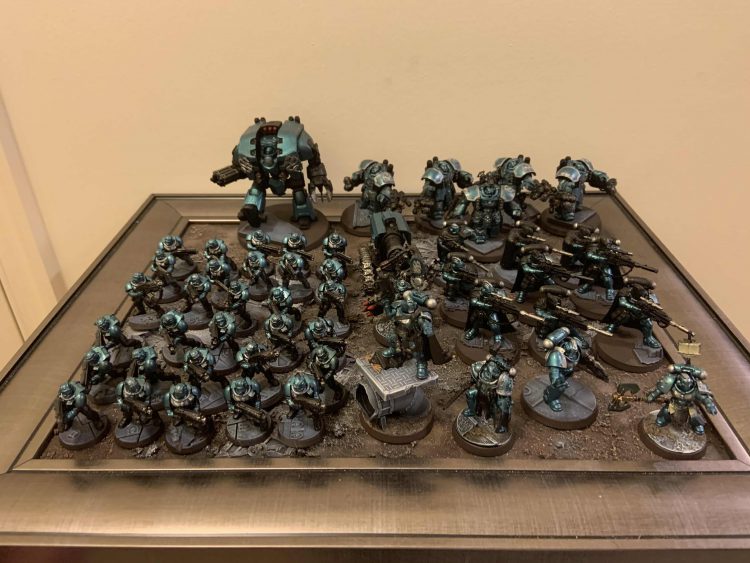 I have been running variations of my Red Scorpions (Alpha Legion!?) list for a couple of months now. I am almost done getting all my army themed together. I had my devastator centurions leftover from my old Blood Angels army, so I needed to redo them in the scheme to match.

My current list is Red Scorpions as Raven Guard Successors with Long Range Marksmen and Stealthy. List is as follows:

This list is my flavor of spin on the “traditional” Raven Guard Successor list. It has the deployment shenanigans for the Centurions, Scouts for board control (and CP), a Thunderfire for Tremor Shells, mad RG-ish snipers, and a Distraction Leviathan Dreadnought (Carab). It has enough snipers to make your opponents think twice about where they put their characters, the deployment options for cents, and a weird wildcard with a character dread that has an pseudo-Iron hands aura (6+++ for models within 6″). There are a lot of re-rolls in this list (shocker for marines I know): You get re-rolls from the chapter master and lieutenant, and a 6″ aura of re-roll failed wounds vs Psykers from Sevrin Loth, plus the grav amp stratagem to re-roll wounds/damage for the grav weapons.

It is a toolbox army, designed to keep my opponents guessing. Ironically enough, the amount of toolbox involved even has me guessing when I am piloting it sometimes. The way I prefer to play the list now versus the way I played it when I first started testing it is entirely different. 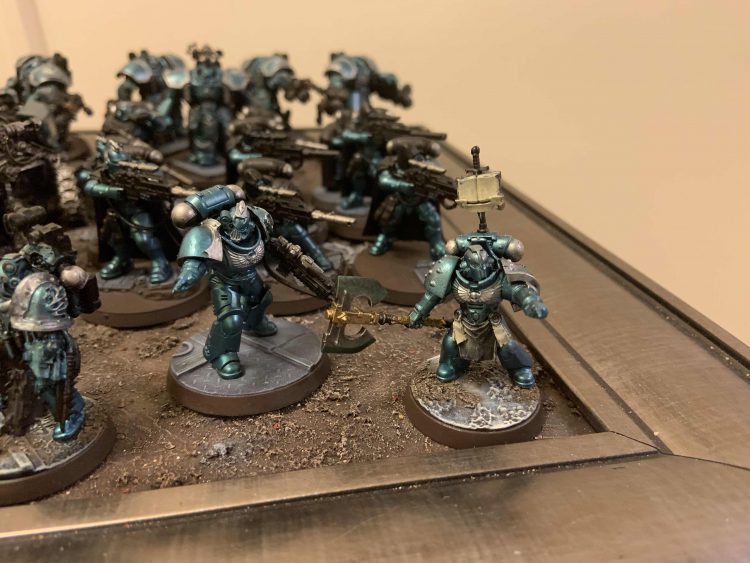 OK so at a closer glance, there’s something funny about those boys… Credit: Shane Watts

I have been playing variations of this list to varying degrees of success for a couple months now. For the next major test, I will be going to Goldensprue on Jan 11th and 12th to run one last set of tests before LVO. I’ll be doing a recap of my experience at the event in my next article, so be on the lookout for that!