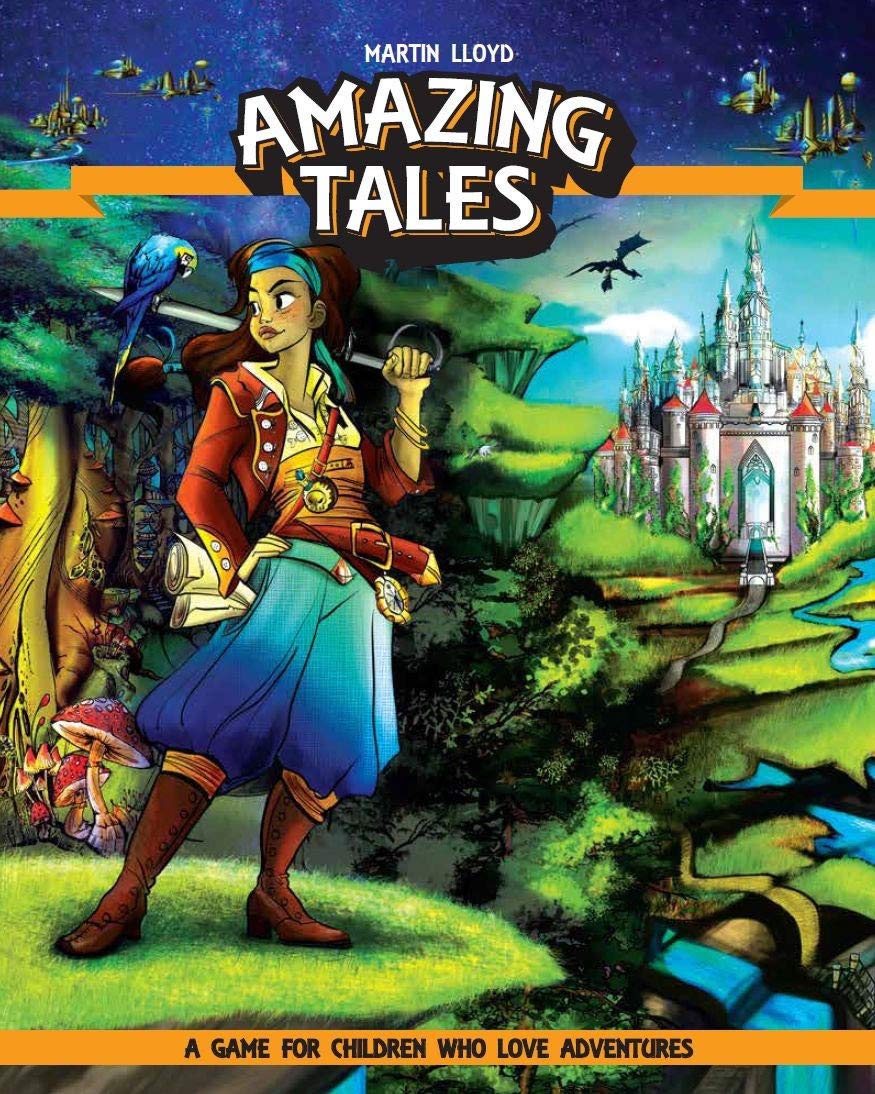 We’ve been on a bit of an RPG kick here at Turn Order. We’ve talked about narrative RPGs with Ilor’s introduction to Apocalypse World and Tiffany’s review of the Apocalypse Powered Brindlewood Bay. I reviewed the Alien Starter system which—while narrative focused—is closer to Dungeon’s & Dragons as far as mechanical crunch. Today I want to continue talking about RPGs which a slight change in focus: I’m going to talk about a family of RPGs I’ve successfully played with kids as young as 3 years old. Amazing Tales has been a staple of the gaming table around here since we first played, so when Martin Lloyd offered a copy of the recently published Amazing Heroes I leapt at the chance to check it out.

Amazing Tales, by Martin Lloyd, seeks to solve an eternal challenge facing those parents (and aunts/uncles/cousins/friends etc) who love games. How do we successfully introduce these games to our little ones? Dungeons & Dragons is far too complex for your average 5 year old and while you could certainly hack it, it would require a lot of work. Martin solves this by stripping away nearly all the mechanisms (the rules fit on a single page) and focus on something kids are already really good at: telling amazing stories.

Amazing Tales begins with character creation. Who do you want to be? You’re encouraged to ask your young players who they want to be and to draw a picture. If you’re playing sci-fi world then maybe they’re astronauts or aliens. They can be pirates or knights, detectives or superheroes. Notably, you can be a ray-gun wielding motorcycle-riding dragon as well. Let the kids’ imaginations run wild. Amazing Tales is setting-agnostic and leaves it up to you and your table to figure out (though a number of examples fill the last half of the book to make this easier on GMs).

Next your players give their characters 4 unique skills. This is a great opportunity to let the kids go wild. Anything can be a unique skill and your players will definitely come up with creative ideas. One of the examples the book gives is “can talk to animals” which is definitely not a skill you’ll find on the D&D character sheet (not exactly, anyway). Again, what’s important here is to go with it, let the kids drive the story so that they’re excited about it.

From here it’s game time. Each unique skill or ability gets a die assigned to it (d4, d6, d8, and d10) depending on how good they are at that skill and every single roll is resolved by trying to roll 3 or higher. Play is super easy which makes it super approachable to the little ones. My 3 year old had a blast making his character and while the skill were simple—”has a horse” and “swords” were among his options—it didn’t matter. It was his character and his choices.

Following on the success of Amazing Tales (it quickly went Adamantium on DriveThruRpg), Martin Lloyd has written a new title in this line called Amazing Heroes. Where Tales was setting agnostic and is very rules light, Heroes is specifically focused on Superheroes and ramps up the rules complexity (just a bit) for both the players and the GM. This does push the game out of reach for youngest gamers (I would not play this with my 5 year old) however it does push it into range for adults. Ilor mentioned “bad PbtA hacks” in his article; I’m not sure Worlds in Peril is bad per se, but I think I’d rather play Amazing Heroes.

Again, the focus here is on the story. Even the complexities that have been added are done to make the story richer. Instead of all rolls targeting 3+, the target number changes based on how difficult the GM determines the situation to be. While there is no HP to track, characters will take various conditions that can ultimately result in the character dying or being captured. Experience is introduced along with various ways for your character (and the scope of the game) to grow!

Again the book opens with character creation. There is a character sheet this time around, and one of the big initial questions is on the scale of your game. A similar dice system is used in Heroes but you do have a choice to make regarding what the dice represent. A d10 in Super Strength for a “street level” heroes game might mean the ability to lift cars but if your game takes on a more epic scale it could mean much greater power. Daredevil and Captain Marvel are both really good at fighting but I doubt Murdock would have been able to beat up on Thanos.

Unlike Tales, there is more structure here. You don’t just get 4-5 superpowers; you only get 1 to start. The other dice are assigned to other elements of your character like Personality Traits or Profession. This systems provides more direction which creates characters that are more rounded than the Knight That Has a Sword I mentioned above, as befitting a system for older players. Part of defining professions and scope means defining relationships with the city and environment. This is awesome as it makes your RPG experience richer.

Because the characters are a little more involved, so too is GM prep. Villains need some basic stats and information to round them out so more of Heroes is devoted to these rules. Again I want to stress that none of this is overly complex. It is easy enough for 8 year-olds to play and it is also easy enough for 8 year-olds to run. Lloyd has again stripped the RPG down so that it has just enough to provide more structure or more crunch, while keeping it light and accessible.

Accordingly, the two included scenarios are more fleshed out. The first feels classic; a mad scientist has concocted a secret chemical that is turning creatures (and, spoilers, himself) into giant monsters! Your players will battle giant squids and massive ants as they save the day. The second is more occult focused, with demons and devils, and is written to showcase how the game can be just as fun for older players.

There’s something different about telling stories with little kids. For starters, they’re really comfortable with it. Society hasn’t ground them into little nubs of anxiety like the rest of us and so they imagine with a refreshing freedom. In one of the games I played with my then-3-year-old, we began on a pirate ship and ended up riding a giant whale to the moon, where we had a pizza party. Did it make sense? Absolutely not. Did it matter? Also absolutely not. He was engaged and hanging on my every word and excited to hear his contributions added to the story. As he’s gotten older, the stories have gotten more cohesive but they aren’t any less fun.

As a grown up, playing a game like Amazing Tales has made me a better GM for adults. I’ve learned that it’s important to go with the flow and let go of control. When my players—whether they’re 5 or 35—have an idea or question, rolling it into the adventure makes it that much more exciting for them. The rules-light nature of these games means you don’t rely on stat tables or skill blocks to figure out the drama. I do enjoy D&D and rules heavy games but my experiences with a game like Tales make the entire adventure richer.

Both Amazing Tales and Amazing Heroes are slam-dunk purchases. The GM tips scattered throughout both books are well worth it as a resource, though to be honest Tales is likely only worth it as a game for kids. It’ll be fine well into early teens, though I wouldn’t be surprised if it hooks your players and you move into the more advanced Heroes with older kids. Amazing Tales has been the source of a number of fun adventures over the last couple of years so I was very excited to learn that Heroes has released. My little one isn’t quite ready for it, but he will be soon and I can’t wait to see what kind of hero he creates.

Amazing Tales and Amazing Heroes can be found on DriveThruRPG or in hardback at various online and physical retailers.