The Ruleshammer Compendium has been updated with all the latest Ruleshammer Q&As from the last few months!

The Forgeworld FAQ has removed the WARBOSS keyword from the unit, causing it only be able to declare SPEED WAAAGHS.

Trukk Boys and other Specialist Mobs in Transports

Starting with a pretty obvious one here… the Specialist Mob rules states that the units they are used on lose their <CLAN> keyword, replacing it their new Specialist Mob keyword – whatever that may be. That previously prevented Trukk Boyz (and other Specialist Mob Infantry) from riding in Trukks:

Each time you upgrade one of these units, that unit gains the SPECIALIST MOB keyword, and you must replace that unit’s <CLAN> keyword with the appropriate keyword as described under that specialism.

However thanks to the new Codex: Orks FAQ, Trukks now have SPECIALIST MOB INFANTRY added to their capacity rules! TRUKK BOYZ will ride again!

One issue we previously noted was the Kill Rig using its stikka cannon on Aircraft with a minimum move. This was updated with new errata in the FAQ for Codex: Orks released earlier this week:

Each time this model makes an attack with it’s stikka kannon, if an enemy VEHICLE or MONSTER model (excluding Titanic or Aircraft models) loses any wounds as a result of that attack, roll one D6: on a 4+, that enemy model cannot finish any type move more than 12″ from this model until the start of your next turn. If this model moves for any reason, or is destroyed, this effect ends. [Orks Codex – Kill Rig]

This actually resolves two issues that the rule had. Aircraft are now exempt from the effect entirely, so no more wondering what happens if they can’t make their minimum moves. However also it removes a secondary issue where it could use a combination of charging, piling in and consolidating to end up in a position where the snagged unit couldn’t possibly end a move within 12″ because it was too far away. Now the effect ends if the Kill Rig moves for any reason.

Brutal But Kunnin and Goffs Kultur… how do they interact?

So my suggestion turned out to be wrong, we now have a specific FAQ on this.

Q: When a Goff model with the Brutal but Kunnin Warlord Trait attacks, are any additional hits generated by the No Mukkin’ About clan kulture that don’t reach the Inflict Damage step counted when determining how many additional attacks can be made?

A: Yes. Note though, that when making additional attacks as a result of this Warlord Trait, no additional hits can then be generated due to the No Mukkin’ About kultur

So now looking at the rules again:

BRUTAL BUT KUNNIN: Each time this WARLORD fights, if all of it’s attacks target one enemy unit, after resolving all of those attacks, it can make a number of additional attacks against that enemy unit equal to the number of attacks that did not reach the inflict damage step.

Each Time a model with this kultur makes a melee attack an unmodified hit roll of 6 scores 1 additional hit.

Any additional hits generated by the Goff Kultur are counted in the pool of attacks you check to potentially do again if they don’t reach the inflict damage step. Though when making these attacks again none of them can trigger the kultur this time around.

This has cropped up lately and I felt it worth addressing before any more confusion arises. First of all, some players are suggesting that Attacker’s priority applies in these interactions. That’s simply not the case.

ATTACKER’S PRIORITY
While resolving attacks, you’ll occasionally find that two rules cannot both apply — for example, when an attacking model with an ability that enables it to always score a successful hit on a 2+ targets a model that has an ability that states it can only be hit on a 6+. When this happens, the attacking model’s rules take precedence.

In fact this Rare Rules very rarely applies – the example included in the above text is pretty much THE example. The only other interaction where it might apply would be Transhuman Physiology vs. “always wound on X+” rules but transhuman specifically has an exception to that. It doesn’t apply in this case because there’s already a logical result to one rule saying “you can do this” and another saying “you can’t do this” and that result is “you can’t do this”. Think about it for a moment: As a person, you can move through doors, but you can’t move through locked doors. So when you’re faced with a locked door, the result is you can’t move through it. This logic is actually prevalent throughout the rules for 40k:

End of the day, no amount of can-do attitude beats being told you can’t do something. Just 40k being its usual grimdark self.

A rather Machiavellian player has pointed out a really odd interaction with these rules that I felt worth mentioning. As a reminder here’s what the Death Guard relic Revolting Stench-Vats does:

This essentially causes a unit to count as if it had not charged. Usually that’s a bad thing, slowing the unit down and allowing the unit it charged to strike first. However this also effects targeting in the Fight phase. A unit that hasn’t charged can fight anything within engagement range, rather than only units that it declared as charge targets. So the situation below can happen and be pretty bad for the Foul Blight Spawn because of stratagems such as this one, or any fight again ability.

Adrenaline Surge: Use this Stratagem at the end of the Fight phase. Select a TYRANIDS unit from your army – that unit can immediately fight again. 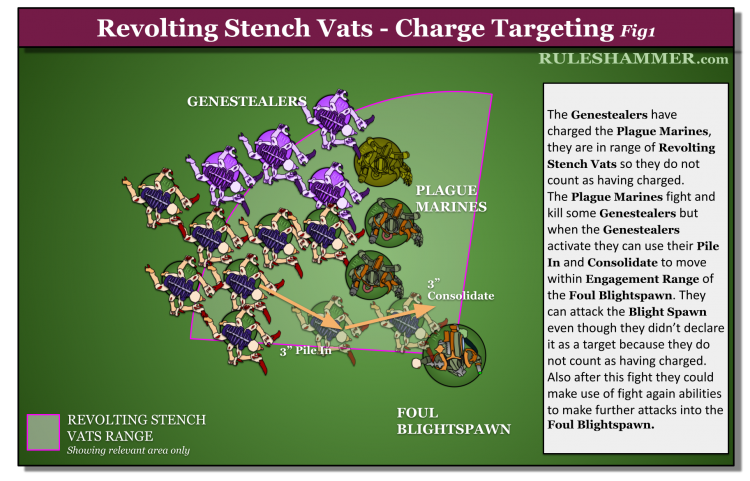 I think this deserves a few disclaimers though: