Welcome to Ruleshammer! This week I’m covering the recent FAQ for Codex Leagues of Votann! You can find more Ruleshammer Q&A by clicking the banner below!

The Votann FAQ is out and well, it didn’t address every issue I covered in my initial Ruleshammer for the faction, such as how damage from Magna Rails has to be allocated or how Ancestral Fortune works with 2D3 damage weapons. However the FAQ did do a lot with Beams… though not all of what it did is entirely clear.

They can hit friendlies?

Yes. Out of the gate the very first question is at very the very least direct and to the point: Beams which intersect or pass over friendly units do “affect” them.

Q: Do weapons with the Beam ability affect friendly units along the line between the firing model and the target unit?
A: Yes. A wound roll should be made against those friendly units in the same manner as attacks against enemy units.

So why did I say that friendly units would not be affected by them in the original article? It’s all because of this part of the Beam rule:

Make one wound roll against the target unit, and each other unit this line passes over (excluding units that were not eligible to be targeted by this weapon when targets were selected).

Friendly units are not “eligible” targets for shooting, so while a bit odd that these beams could apparently pass harmlessly through friends it wasn’t really ambiguous. The rule only said to make wound rolls against units there were eligible targets for the weapon along that line, and that hasn’t changed – the rule still says this, and now the FAQ answer contradicts it. This leads to a series of follow up questions and issues.

Post-FAQ Suggestion: Do what it says; a friendly unit can be hit by beams, however keep on reading for some of the edge cases this FAQ causes!

Beams can hit their own unit?

Unfortunately it was also this section of the rule that previously prevented Votann beam weapons from needing to resolve a wound roll against their own unit.

Each time an attack is made with such a weapon, if a hit is scored, draw a line between the closest point of this model’s base (or hull) and that of the closest model in the target unit. Make one wound roll against the target unit, and each other unit this line passes over (excluding units that were not eligible to be targeted by this weapon when targets were selected).

They are an “other unit” in an “other than the target” read of the rule. There’s still perhaps some room for them to be excluded via the other but it’s not as clear as ignoring units that were not eligible. I doubt many events will rule on Beams this way, and it’s pretty avoidable as an issue if you move your models with it in mind.

What about friendlies within engagement range of enemies?

Unclear. Previously because an enemy unit within Engagement range of a friendly unit is not an eligible target for ranged attacks (outside of big guns never tire which has an already built in resolution, and pistols) it was played that neither the enemy unit or friendly unit could be affected by Beams. 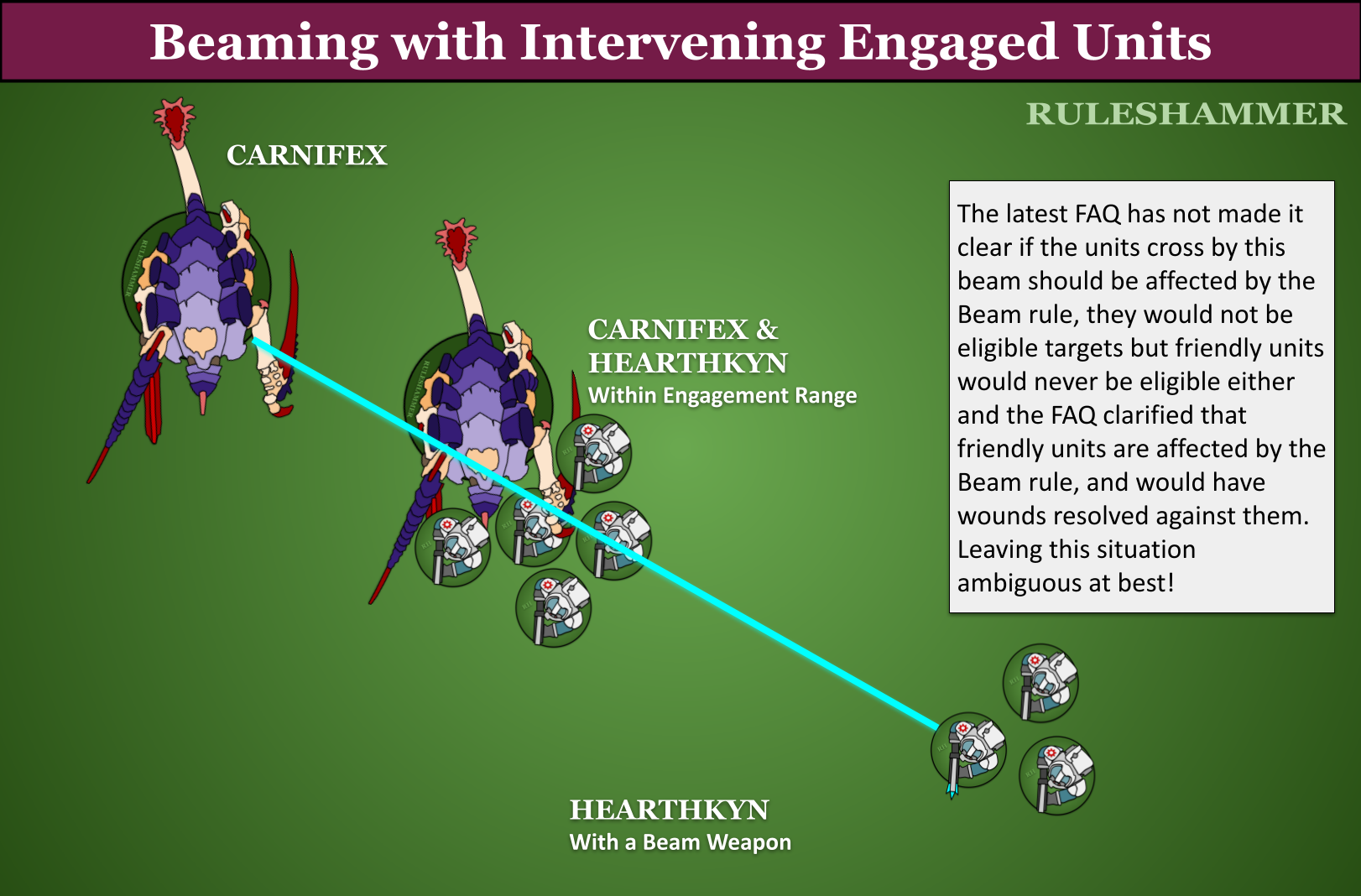 However we now have an FAQ answer that essentially gives cause to ignore that element of the rule, should it be ignored for both units, just the friendly one, or neither. There are, in my opinion (so don’t accuse me of having a RAW backing for this), two ways this “change” could be interpreted:

1) GW used eligibility when they actually meant more specifically that Beams should not be resolved against units out of sight or character units that could not originally be targeted by that beam weapon. This is the version I consider the most likely as Votann have A LOT of beams, and whist this type of rule was not introduced by Votann they are certainly the most prolific user of it. Earlier examples did not have this restriction, such as this Tau Prototype.

ALTERNATING FUSION BLASTER
Abilities: Each time an attack is made with this weapon, if a hit is scored, draw a straight line between the closest point of this model’s base (or hull) and that of the closest model in the target unit. Make one wound roll against the target unit, and each other unit this line passes over.

So while this weapon could beam through to hit out of sight things or intervening characters that weren’t targetable it was ONE weapon in an army and only has 12″ of range. So actually getting into a position to do those things had several layers of difficulty to it. Where as Votann could do it far more easily and more often, hence the restriction. Using this interpretation, both the friend and enemy units locked in combat would have beam wounds resolved against them if visible and not character units.

2) GW didn’t intend for Votann Beams to work differently to earlier examples of the mechanic hence this FAQ answer which would line up with how other weapons, such as that Tau Fusion Prototype would work. I seriously doubt this was intended because of the aforementioned quantity of Beams Votann can bring to the table and the diagrams in the codex making it very clear that Characters and units out of sight are not affected, the codex actually doesn’t include a combat/engagement range-based example. Further supporting the notion that they forgot about that form of ineligibility.

If the intervening units don’t count as “hit”, do any rules still trigger?

First of all this answer confirms that Conversion Beamers do resolve two wound rolls against intervening targets but not for the reason I thought they would:

This confirms that the extra hit from something like an SP COnversion beamer is considered a separate attack and therefore triggers more wound rolls on intervening units. One big difference this interpretation causes from my original suggestion is that the intervening unit does not need to be 15″ away to take the two wound rolls, just the original target.

Second, this FAQ is probably going to cause a bunch of confusion but is actually far more specific that it appears on first read:

Q: When a beam weapon causes a wound roll to be made againstcan intervening unit, does that unit count as having been hit by an cattack for any other rules purposes?
A: No.

I’ve already seen a few interpretations of this FAQ suggest that this means the wound rolls made against intervening units do not count as attacks. This is really not what is says, it says they do not “count as having been hit”. That doesn’t mean the wound rolls being made do not represent attacks – attacks are absolutely happening. Otherwise the “allocate attack” step is going to get very confusing and difficult to resolve. It just means any rules that trigger from the unit being hit specifically don’t happen, one key example being this Stratagem:

Intervening units would not count as hit and not suffer mortals from this stratagem. Only units directly targeted and hit be beam attacks are affected. Rules like this one:

Duty Eternal: Each time an attack is allocated to this model, subtract 1 from the Damage characteristic of that attack (to a minimum of 1).

Would still work for intervening units because if that wound roll is successful, then an attack is allocated. It doesn’t care if the unit was “hit” or not. This answer doesn’t disable every defensive ability in the game for intervening units, or cause the abilities of targets to apply to intervening units via some sort of inheritance system based on a “there’s only one attack” interpretation. There are multiple attacks, and each time you go through the attack sequence is an attack. Some of them in this case just happen to skip the hit roll.

You can find these updates and more Ruleshammer for the Leagues of Votann here.
Have any questions or feedback? Got a rules question you want answered? Drop us a note in the comments below, ask a question in our Ruleshammer form, or head over to r/ruleshammer to discuss.