Welcome to Ruleshammer! This week we’re covering some more questions submitted by you, the readers, and our patrons on the Goonhammer Discord. Remember the banner below will take you to the Ruleshammer 9th Edition Compedium, for all the questions I’ve answered for the last few months!

No. Let me elaborate on what I mean here: When Markerlights were weapons their targets were declared as such. If a unit of Pathfinders had 10 Markerlights you needed to declare their 10 targets before resolving any attacks with the “weapon,” despite these attacks doing no damage. This rule applied:

SELECT TARGETS
When a unit shoots, you must select the target unit(s) for all of the ranged weapons its models are making attacks with before any attacks are resolved.

However in the 9th edition Codex: T’au Empire, Markerlights are specifically not weapons, they are wargear and they are no longer “shoot” they just determine which models in a unit can resolve the Markerlight action fully:

Fire Markerlights (Action): One or more MARKERLIGHT units from your army can start to perform this action at the start of your Movement phase. AIRCRAFT MARKERLIGHT units can perform this action. The action is completed at the start of your next Shooting phase. If this action is successfully completed, for each model in that unit that is equipped with one or more markerlights, for each markerlight that model is equipped with, select one enemy unit within 36″ of that model that would be an eligible target for that model if its unit had been selected to shoot, and roll one D6: on a 3+, that enemy unit gains one Markerlight token.

The only weapon-like element of them left is that the target for each one needs to be a unit that would be eligible if you were selecting a shooting target. They’re still not weapons though so you don’t need to declare where all 10 Markerlights from a Pathfinder unit are going before resolving any of them. You can slow roll them one by one into a particular target and then once you reach how many Markerlights you want to have on that unit, you can carry on with any remaining attempts into other targets.

Q: “If a model is mounted on a “flying base” (e.g. wave serpent) does that count as a base for the purposes of “Measuring Distances” on page 5 of the core rules? In the case of a Wave Serpent that’s important for whether all of your models need to disembark wholly within 3″ of the 60mm round base, or 3″ of the much larger hull.” – Nathan Dimmock

It depends on the model. So yes it does count as a base however that’s not the only relevant issue here. Wave Serpents have a rule called Hover Tank.

Hover Tank: Distances are measured to and from this model’s hull or base; whichever is closest.

Which says that when measuring to this model in particular you should measure to whichever is the closest of the hull or base. This is not true of all similar vehicles though, not even within single factions. T’au Piranhas have the same 60mm flying bases of Tau Devilfish but the former has no hover rule so they only measure to their base, but Devilfish have the same Hover Tank rule as Wave Serpents.

Raiders, the Drukhari transport, have a rule saying to completely ignore the base and just use the hull.

Hovering: Distances are always measured to and from this model’s hull.

Something that can have an actual impact on their disembark range depending how high over the board they are. And then the real clown of the pack, Starweavers:

Hovering: Distances are measured to and from the hull or base (whichever is closest) of the closest model in this unit.

Which RAW could mean that the the furthest back Starweaver of the unit be actually 30″ away but so long as the one closest to the target is within 24″ then technically they all are. No one players this rule as written though, I have no idea why it says that!

Multiple exploding weapons in a multi model unit, where do the mortals go?

Q: “In the new Astra Militarum 9th Edition Codex, the Scout/Armoured Sentinel has been given an entirely unique new plasma cannon that’s slightly different, in that it only does “bearer takes one mortal wound.” The issue that arises is that Sentinels can be taken in groups of up to three. In normal circumstances, as in the case of Tau weapons that do one mortal wound, it states “the bearer’s unit takes one mortal wound”. However in this instance it does not say “unit” it simply says “bearer”. Does that mean that the Plasma Cannon on the Sentinels needs an FAQ, as they apply mortal wounds to individual sentinels despite being in a unit. If that’s the case, you could have three sentinels, all wounded at different degrees, which makes wound allocation a nightmare.” – Nathan Layhe

GW messed up on this one. That’s really the answer here, the rule absolutely should be “bearer’s unit” as without that word the wound allocation rules for this unit do just break down and every other time this has occurred they have changed the rules to make it work this way. Though oddly enough the Tau weapons you referred to have actually all changed since their 8th edition codex to do as many mortal wounds as they roll 1s now, rather than just 1 mortal max per weapon.

Pre-FAQ Suggestion: Play the rule as if it did say “bearer’s unit” it will likely change to this in the future anyway and without doing so wound allocation doesn’t function correctly.

Can non-Infantry, Beast and Swarm benefit from Dense Cover?

Q: Do vehicles, monsters, and titanic units receive the benefits of dense cover? I don’t think they do based on the keywords associated with terrain. Namely, Area Terrain. Based on the examples given in the Nachmund book of common pieces of terrain that have the dense cover rule, forests and Mechanicus walkways have the Area Terrain keyword. The phrasing of that keyword states that Infantry, Beast, and Swarm models receive the benefit of Area Terrain. Doesn’t the “-1 to be hit” penalty qualify as a benefit of terrain along with +1 to saves for light cover and defensible bonuses?

Yes. You’re not alone on being confused by this rule recently, I’ve definitely seen a recent uptick in people asking about this in the communities I frequent. Every unit in the game can benefit from Dense Cover, regardless of what Area Cover says. This is because the benefit of Dense Cover is not provided by being within the area but via a different means entirely.

If this terrain feature is at least 3″ in height, then subtract 1 from the hit roll when resolve an attack with a range weapon unless you can draw straight lines, 1mm in thickness, to every part of at least one model’s base [or hull] in the target unit from a single point on the attack model’s base [or hull] without any of those lines passing over or through any part of any terrain feature with this trait.

It’s all about if you can draw lines to the model’s base or hull that don’t cross the terrain. 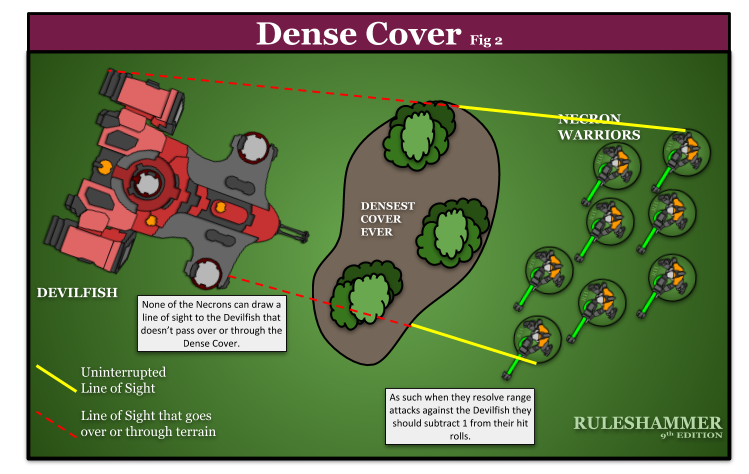 Unlike rules such as Light Cover which are just an explanation of what the benefit of cover is for a piece of terrain rather than also including how that benefit is gained. I have more detail on Dense Cover in the Ruleshammer Terrain guide, and even more detail on how very confusing it could be if played Rules As Written in this article on Warhammer 40k Acessibility.

What Counts as “killing things” for a unit or army?

Q: Secondaries that require “units from your army” to kill things. If an enemy unit fails morale and loses their last model to it, does that count? In the rulebook definition of being destroyed, morale is included, but does the fact that something destroyed it mean that one of your units did? But you don’t know exactly who? IE Deathcompany needing to kill stuff, it wouldn’t count if morale did it, but if its just “a unit” it would? or not? – James

So there are a few different levels to this which the destroy section is actually only covering one part of:

This whole section is describing “destroyed by you”. It’s clarifying that that includes dying to attacks made by your models, by morale, and by rules your models are using (which is oddly the line that covers explosions counting). What counts being destroyed by a unit/model in your army is slightly more restrictive and it’s all in the glossary entries.

Unit destroys a unit: A unit is considered to have destroyed another unit when a model in the former destroys the latter.

As models don’t “use morale” to destroy units, units that are destroyed by failing morale do not count as unit or model kills. Here are some examples:

No, Morale Destruction would not count.

Score 3 victory points at the end of the battle round if more enemy units than friendly units were destroyed this battle round.

No mention of needing to be destroyed by your army, in fact even models killed by enemy units killing their allies with explosions count for the tally in this secondary.

Fury of the Lost

No, Morale Destruction would not count.

Really harsh but even the Death Company unit dying to Morale doesn’t count as they have to be destroyed by the enemy units.