GT2021 To The Last  – Splitting units and when that occurs.

To the Last (aka While We Stand We Fight) was changed in CA 2021 so that units which “split” after the start of the battle only award 5 points if all parts of the unit survive, 3 points otherwise, with the example given by GW of Tau drones. How does this work with pre-battle splitting of units, such as combat squadding? Is your ‘To the Last’ (1) the pre-splitting unit, 5 points if both halves survive, 3 points otherwise; (2) the pre-splitting unit, 5 points if at least one half survives; or (3) the post-splitting unit (so half of the unit on your army list), 5 points if it survives. And if (3) is correct, then do you use the (roughly) halved post-splitting points value to work out if it’s one of your 3 most expensive units. I think the answer is (2), but it seems too good to be true. Thanks! Tim

So essentially I don’t think GW are using terminology consistently with regard to this rule, both the timing of the splits and the points cost to use are slightly ambiguous.

Rules as written this basically has a tonne of holes if you use “Step 14 Begin The Battle” to when “the battle” in this rule starts. Much like how we now have an FAQ that clarified that Deployment is starts at “Step 10 Declare Reserves” rather than “Step 11 Deploy Armies”.

If you use Step 14 then Combat Squads will have happened before determining which three units this is. However this is not what is written, it exact wording “before the battle, after you selected deployment zones”. That exact moment is before you declare reserves and therefore before any “at the start of deployment rules” such as Combat Squads. As such the points value question for these units is the whole unit, it hasn’t split yet so that ambiguity doesn’t occur. Tau drone also don’t split up from the unit’s they accompany til later on in the deployment sequence so in my opinion those should be included, the exclusions for drones are about not needing to keep them alive to score 5VP, there’s no exclusion for them in the points cost for the unit.

So that answers the points cost issue but there’s still ambiguity about the 5/3VP for a unit that splits during the battle.

You’ve just determined that the larger unit of Intercessors your army has is one of your most expensive, and you use Combat Squads on that unit during the Declare Reserves step. Has this unit split during the battle? Tau Drones are actually similar to this.

they split up during the Deploy Armies step of the battle if they’re brought with Battlesuits or Infantry. The only time a drones unit splits into a smaller unit during an actual battle round is when detaching from a Tau vehicle.

Detach: Both Gun Drones can detach at the start of your Movement phase by disembarking as if from a transport. From that point onwards, they are treated as a separate unit. They cannot reattach during the battle.

Or when a Battlesuit unit is set up from reinforcements. There’s other abilities likes this, Vehicle Squadrons and it’s derivatives split units up when the unit is set up for the first time. This will usually be during deployment before Step 14 as well, but some maverick might decide to Strategic Reserve a unit of Leman Russes or a brood of Carnifexes.

So this would leave us in a position where neither Combat Squads or Drones meet the criteria for To The Last. In fact by splitting the units picked earlier we have essentially removed those units and replaced them with smaller units and would always score 0VP for this objective. This is pretty ridiculous. As such I actually recommend that this nuance be ignored, as I think it is already by the majority of players. My personal opinion on it is that Games Workshop are a little inconsistent with “game” and “battle” in the terminology. By the time you get to “start battle” in the steps you have two battle-forged armies, of a certain battle size, on a battlefield, my point is that the steps 1 through 16 describe how to wage¹ a battle of warhammer 40k and that the common sense approach to this is to treat all unit splitting abilities are being covered by the “if a unit splits” clause. Which is a shame because I’m not a big fan of taking a Rules as Intended approach here but so much of this secondary just doesn’t work with out.

¹ The first line of the Grand Tournament steps is “A Grand Tournament 2021 game is waged by following the sequence below”. Are games waged? Battles are certainly waged I know that for sure. 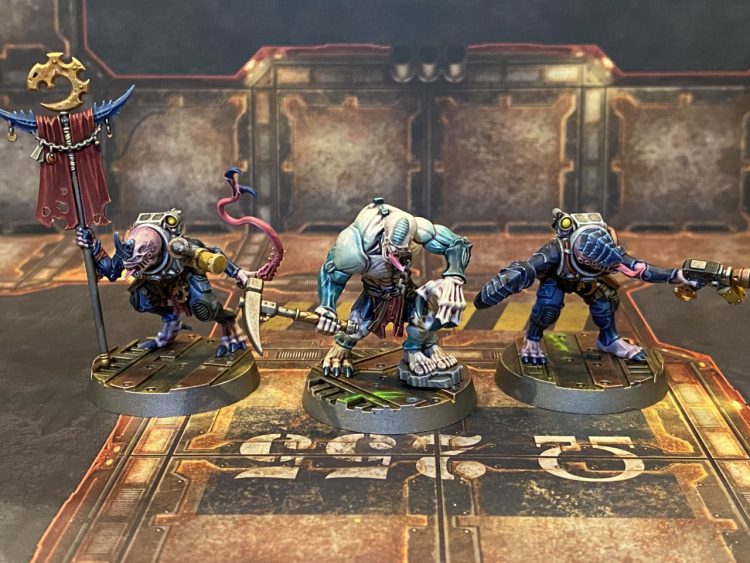 GSC – Ambush out of your deployment

Can a model, like a Goliath truck, using the ambush marker rule, be deployed outside of your deployment zone? Within 1″ of your ambush marker? Outside 9″ of any enemy models.

Yes, using the current Cult Ambush rule, in fact that first model placed doesn’t even need to be more than 9″ away from the enemy.

If you have the first turn, you must reveal all of your ambush markers at the start of your Movement phase, one at a time, before moving any units. Each time you reveal an ambush marker, select one unit from your army that you set up in ambush, then set up one model from that unit within 1″ of that ambush marker. Then remove that marker before setting up the rest of that model’s unit wholly within 6″ of the first model, wholly within your deployment zone and more than 9″ from any enemy models (any models that cannot be placed are destroyed).

The within your deployment zone and more than 9″ requirements only apply to all the subsequent models deployed after that first one.

Aeldari – Battle Focus and Falling Back

New FAQ raised a question/exploit about Craftworlds’ Battle Focus “If this unit moves or Advances in its Movement phase, weapons (excluding Heavy weapons) are used as if the unit had remained stationary”.

Does it allow Aeldari to fallback and shoot without repercussions or should we read Battle Focus as (If this unit makes Normal Move or Advances in its Movement phase, weapons (excluding Heavy weapons) are used as if the unit had remained stationary)”

As this ability is from 8th edition I personally think the second read is the intent here. The term “normal move” didn’t exist in 8th and fundamentally if it’s not Normal Move or Advance then there’s no reason to mention any of the subset of moves. The rule could have been written in 8th as “weapons (excluding Heavy weapons) are used as if the unit had remained stationary” without the first bit entirely, if you read “move” to include falling back.

First let’s check the wording of the Stratagem,

Use this Stratagem in your Shooting phase, when an ADEPTUS MECHANICUS unit from your army is selected to shoot. Until the end of the phase, each time a model in that unit makes an attack with a radium weapon against an enemy unit (excluding VEHICLE units), an unmodified hit roll of 4+ automatically wounds the target.

I thought this was pretty cut and dry but some very helpful comments have convinced me to take a second look at this. I’m not a 100% that it’s clear but I agree with the logic I’ve been presented with. The issue is with the hit roll rules themselves.

So a roll of 4 or 5 to hit with an Enriched Round “automatically wounds” but the rules aren’t clear on if this means it “has wounded” or if it’s “going to automatically pass the wound roll”. I’m inclined on further reading to lean towards the latter. Meaning that you’d actually need to hit in order to advance to this step of the sequence, at which point you would then automatically wound. This does change a few other facets of the rule in common usage, for instance in the turn that the unit BS is reduced to 4+ by an imperative, then if the unit Advanced, shot through dense cover, or was affected by some other -1 to hit penalty. They’d only be hitting on 5s.