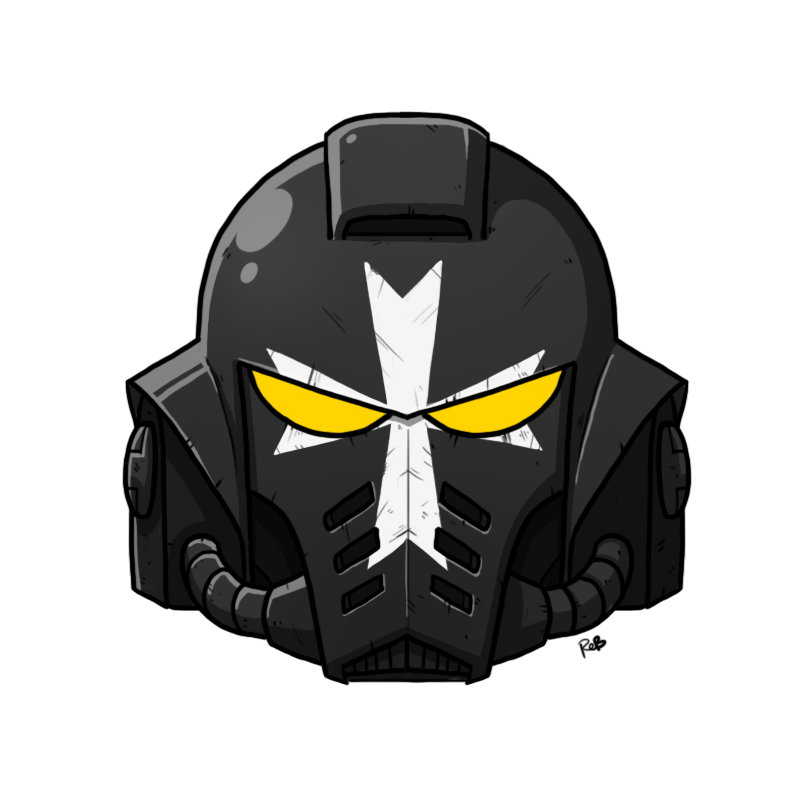 A quick update to start us off, but as of the latest FAQ Black Templars can no longer use the Devout Push push movement to embark into the “penance wagon” any more.

Page 46 – Devout Push
Add the following to the end of the first bullet point: ‘That unit cannot use this move to embark within a Transport model.’

I don’t know how wide spread this actually ever was but the rule change prevents it. Something worth noting is that this is a specific limitation on Devout Push as a Stratagem. This clarifies that the models were ending their move closer and then embarking as was written. 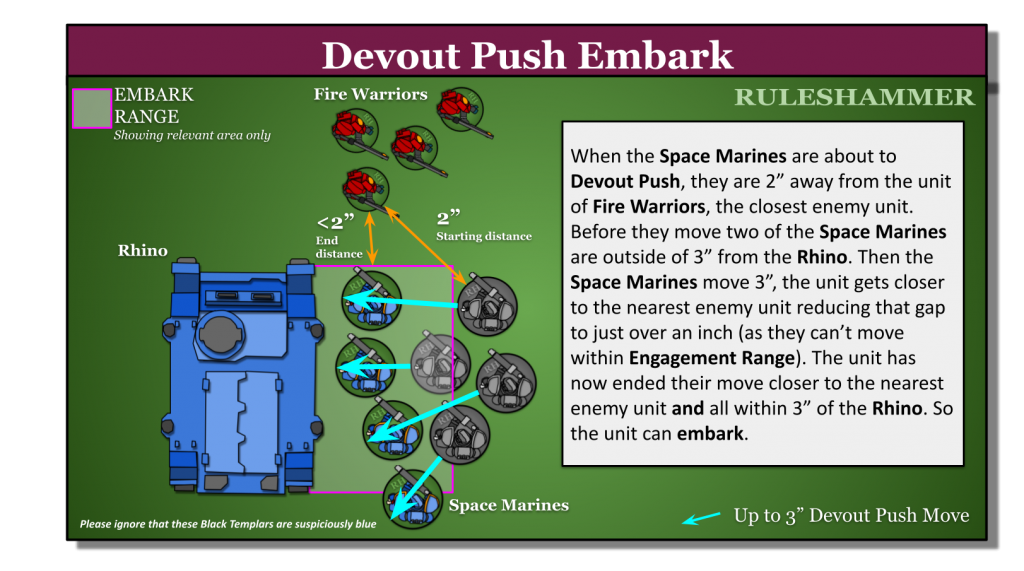 I drew a Rhino for that diagram and everything. 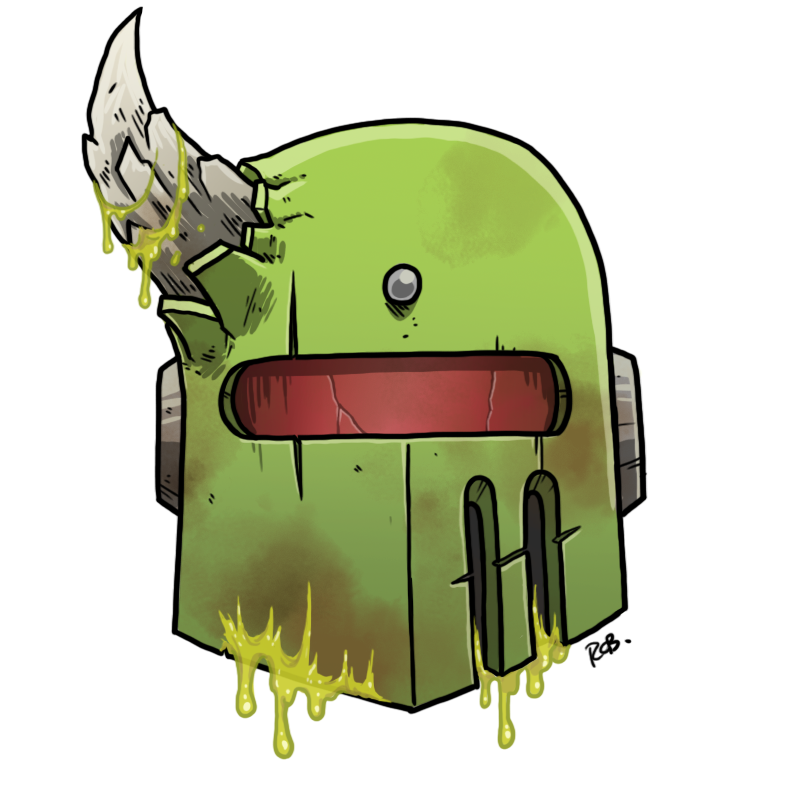 This one game up at the latest GW event.

Q: Can a Death Guard unit with the Inexorable Advance rule Advance and then start an action in the same turn/Movement phase?

The short answer is “no,” but you won’t find that from any of the rules involved. Unlike most “Remain Stationary” rules, it’s not for a specific phase such as “can Shoot as if it has remained stationary.” Inexorable Advance works for the entire turn based on the previous movement phase.

This unit counts as having Remained Stationary if it did not Fall Back or Advance in your previous Movement phase.

However the Remain Stationary FAQ blocks this rule from allowing a unit to perform an action.

8) Even if a unit is subject to such a rule, it cannot start an action if it has Advanced or Fallen Back this turn.

It would be nice to see this line added to the Actions section of the rules in a future Chapter Approved, the number of Rare Rules that aren’t reflected in the main rules text is not quite significant. 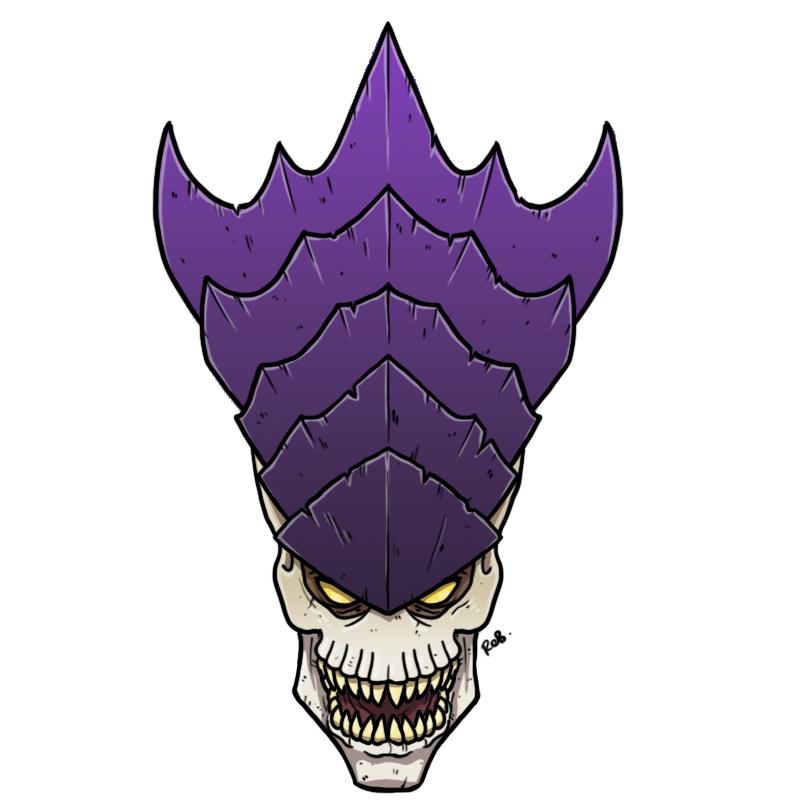 This one really caused a stir here at Goonhammer HQ. Synaptic Link we agreed pretty quickly is not an Aura but that just led to more questions;

So fortunately the answer to question 1 made 2 less necessary to solve. Synaptic Link is not tied to Synapse at all, it’s just using a lot of the same numbers and similar words.

These abilities can effect friendly units within Synaptic Link Range, as described on the page opposite.

So it does use the SYNAPSE keyword but that’s the only link between the two, this also means that abilities that extend the range of the Synapse ability have no effect on Synaptic Link Range. They are both 12″ by default but that’s where the similarities end. As such you can’t block Synaptic Link abilities with Aura blocking ones.

What about question 2 though – is the Synapse Ability an Aura?

Well I think the conclusion we came to on this was actually, we don’t know. It doesn’t follow the patterns of other auras we know about so far, but it’s also an early 8th edition Codex ability and those tend to have less… standardized wording.

The main difference here is how it’s constructed to function; it’s not “while <HIVE FLEET> units are within 12″ they automatically pass morale” it’s “if you are within 12″ of a unit with the ability then you auto pass morale”. It reminds me of the Necron Protocol rules.

…while a unit that is eligible to benefit from this ability is within 6″ of a friendly NECRONS CHARACTER model (excluding C’TAN SHARD models), that unit benefits from the selected directive.

What about Synapse then? I think it’s a very borderline rule that I don’t think I can categorise with any level of certainty. So unfortunately if your opponent has an Aura limiting ability I’d recommend having a discussion pregame on Synapse and how it will interact with that ability for your game.

My Personal Take: I’d be inclined to let a Tyranid player have it not count as an Aura, partially because of the ambiguous wording but also because of how intrinsic Synapse is as a concept for Tyranids. Disabling it would be very significant, more so than a normal aura.

Tau – Do Interceptor Drones have the Flyer Battlefield Role?

Q: What role do Interceptor Drones have and can they be used with the Fire Storm Stratagem?

I want to preface the answer to this with: Don’t actually do this. I seriously doubt GW intended for this when writing the Fire Storm Stratagem. I’d put money on the fact that they forgot.

So with that said, Tau Drones are weird. Accompanying Drones interact with a whole bunch of rules in odd ways, such as counting as part of a unit for determining it’s points cost for To The Last but then not being part of the unit for the purposes of scoring To The Last. One other notable way is how Tau Drones inherit battlefield roles.

ACCOMPANYING DRONES
Many T’au Empire datasheets allow units to be accompanied by Drones. In such instances, unless stated otherwise, all wargear options only apply to the unit that is being accompanied by Drones, and not to the Drones themselves. After deployment, units of accompanying Drones are treated as having the Battlefield Role of the unit they accompany, and are considered to have a Power Rating of 0.

This makes the Interceptor Drones that accompany a Sun Shark Bomber, Flyer Battlefield Role units. Which would let them be chosen units, assuming they are disembarked, for Fire Storm.

Use this Stratagem at the end of your Movement phase. Select up to three T’AU EMPIRE units with the Flyer Battlefield Role from your army. This Stratagem costs 1 additional Command Point for each selected unit. Roll one D6 for each enemy unit within 3″ of any of those selected units. On a 4+ that enemy unit suffers D3 mortal wounds.

It’s not the first time this odd rule has lead to a weird interaction though. For instance Space Marines in 8th edition had access to a Maelstrom Objective that awarded VP for kill enemy units with the Transport Battlefield role. Which is the role Gun Drones accompanying a Tau Devilfish inherit… yeah, that was a weird one.