Welcome to Ruleshammer! This week I’m covering rules that are still an issue this far into 9th and how they are commonly handled. Remember the banner below will take you to the Ruleshammer 9th Edition Compedium, for all the questions I’ve answered for the last few months!

Last week I covered a few areas of Warhammer 40k 9th edition where what’s written and what’s played don’t always line up. This week… more of that, because of course that wasn’t the end of it.

This one is relatively benign and not even something that directly contradicts the rules in most circumstances. It concerns disembarking from a destroyed transport.

DESTROYED TRANSPORTS
If a TRANSPORT model is destroyed, and that model has the Explodes ability (or equivalent), roll to see if it explodes and resolve any resulting damage to nearby units before setting up any units embarked within it (if any) on the battlefield. If there are any units embarked within the destroyed TRANSPORT model, these must now immediately disembark before the model itself is removed from the battlefield; these units are not affected by the destroyed model’s Explodes ability (or equivalent) – instead you must roll one D6 for each model you just set up on the battlefield. For each roll of 1, a model that disembarked (your choice) is destroyed. Units cannot declare a charge or perform a Heroic Intervention in the same turn that they disembarked from a destroyed TRANSPORT model.

If the transport has got any enemy models nearby it’s possible that there won’t be sufficient space to set up the entire unit. Rules as written you should disembark the unit before making the rolls to see if any models die, as you only make as many rolls as models you set up. If some of the models couldn’t fit in the available space either due to terrain, other friendly models, or enemy models and their engagement range, those models are destroyed before you roll. 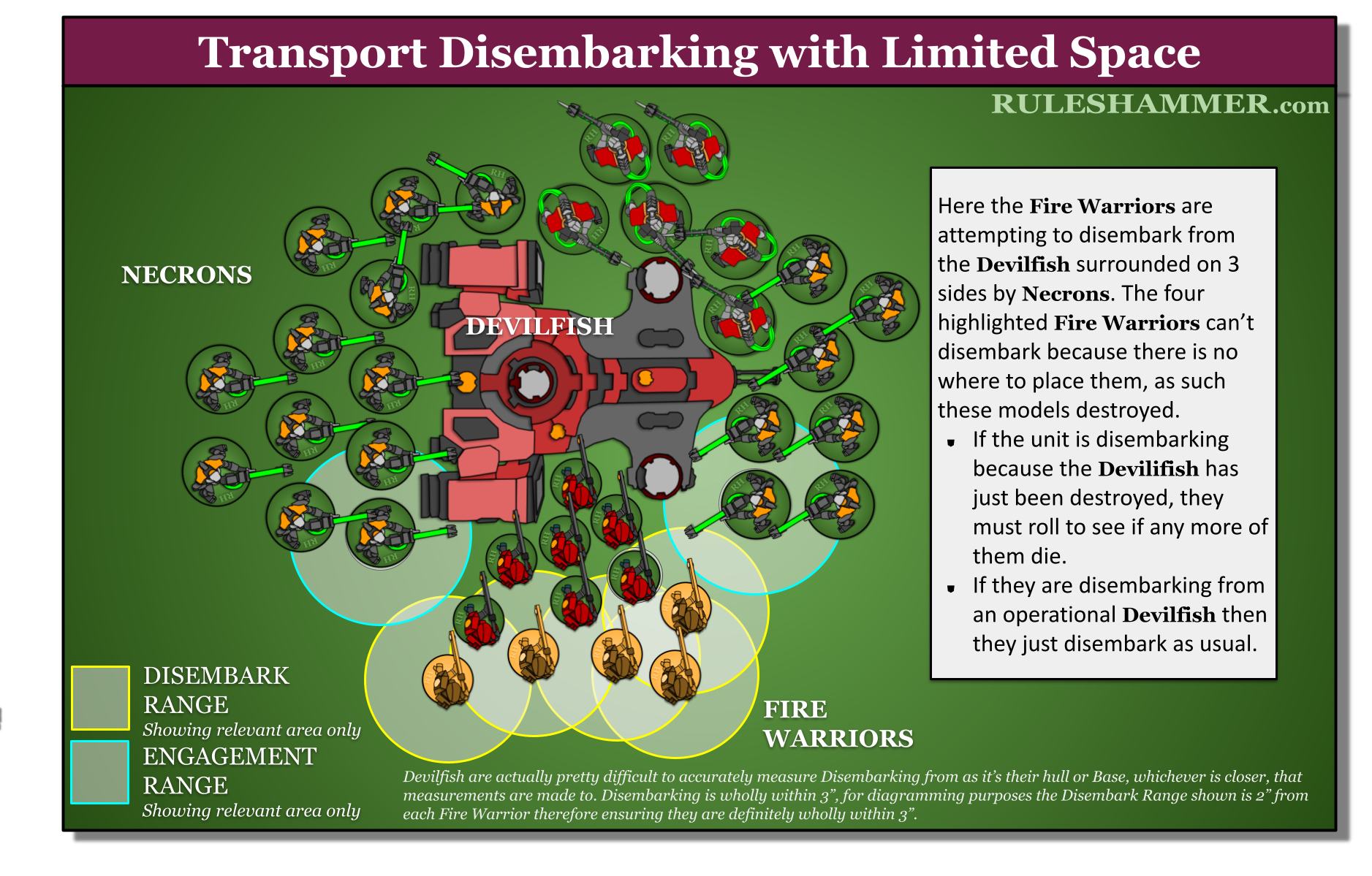 In reality most people will just check how many models can fit and make the appropriate rolls and then place the models on the table, because it’s a bit of a waste of time to get models out of a case or set them up just to remove them. What’s important is that when it matters you check how many can actually fit and then roll that number of dice to the destroyed transport rule.

So rotation in 9th is basically a mess. There’s no fine point on that, the rules are vague, many large models lack bases, and many models large and small extend past their base, so it gets very confusing very quickly. What do the rules actually say though?

The distance a model moves is measured using the part of the model’s base (or hull) that moves furthest along its path (including parts that rotate or pivot).

Hull is defined elsewhere as being all part of a model that aren’t base.

If a model does not have a base, such as is the case with many vehicles, measure to the closest point of any part of that model; this is called measuring to the model’s hull. You can measure distances whenever you wish.

But only in a way that doesn’t really make it clear if based models have “hulls” or not. The main improvement 9th made over 8th is that there are no parts that are magically “not hull” like Turrets. Which meant they could spin freely as much as they liked in that edition; in 9th you are supposed to account for their movement with no freebies.

Really the best I can suggest is that you agree with your opponent on how you will be accounting for it before the game starts. As disagreeing mid game when there’s stakes on one interpretation vs another, as in if it’s the difference between reaching cover or an objective, loads the debate on both sides. Better to discuss it before it matters.

When 9th started I drew this diagram for how I thought the rules worked for rotating a turret in 9th… I’m really not that sure about it 2 years in if I’m honest. 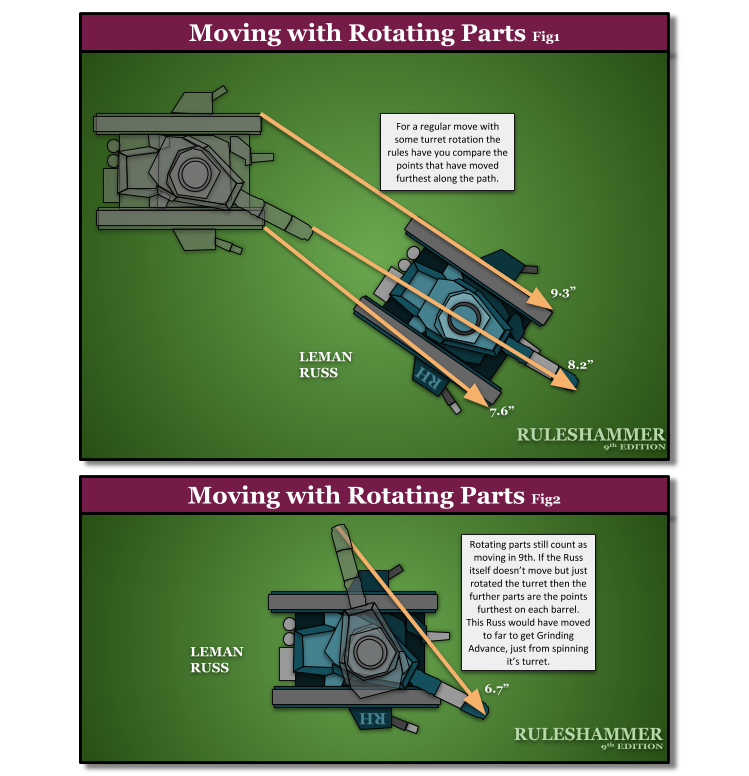 It’s certainly a method, but I’m not as sure as I was back then about the point to point measurement as I was then.

furthest along its path

What is the turret barrels path? It can’t literally move along that line, it would take an arc, is that its path? We would certainly measure a few steps of a path for moving around an obstacle for instance, is the Russ an obstacle to its own turret?

Then when things get really heated people start throwing around terms like “distance” and “displacement”. For those who don’t recall their primary maths class with crystal clear recall.

Distance – A length travelled along a path by an object in motion.

Displacement – How far apart the starting point and end point of a motion are in a straight line.

Generally most move measurements in 40k are distances. This allows models for instance to move forward say 6″t and back 6″ to the same place, and have moved a distance of 12″. Players might do this in order to use certain abilities that require they moved through or over an enemy unit for instance. Displacement does crop up still, Aircraft minimum moves are displacement as they must end further than this minimum from where they started. However as they usually can only move in straight lines this isn’t very distinct from distance. There’s also a Dark Angels Secondary objective that actually requires displacement to score, mostly to avoid the sitting still and claiming to have moved issue. 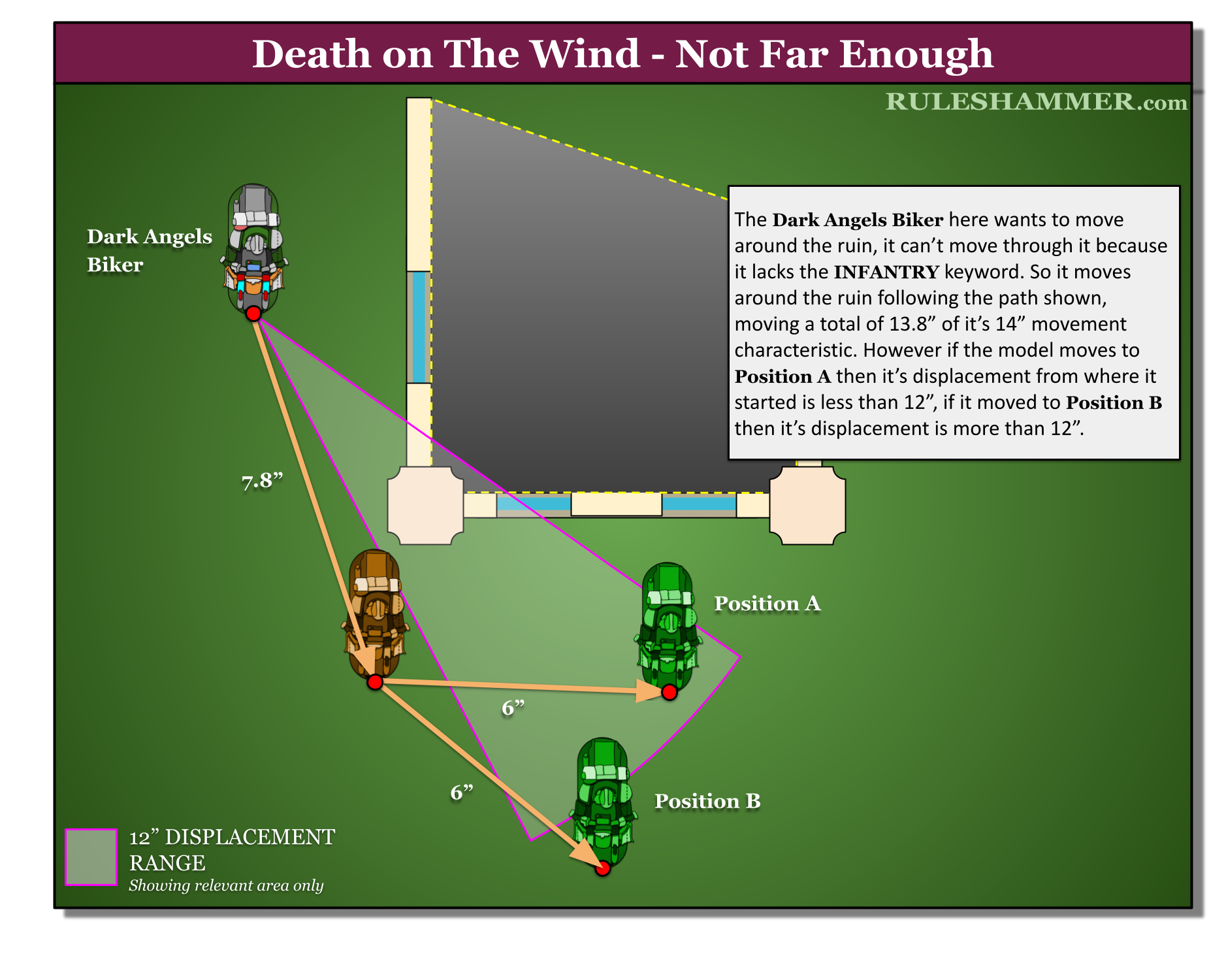 You haven’t actually said what we should do

Ah. Yes. I think generally just being communicative with your opponent is key. If you want to move a unit to end within X” of an enemy unit, pre-measure! See if that move is even possible. Remember that no amount of rotation should result in you being closer than the distance you started apart, minus that unit’s movement.

This one just keeps needing to be mentioned as it’s still a surprise to some players. If both players have Objective Secured models within range of an objective, then it reverts to the player with the most models in range. Not just the objective secured ones.

This isn’t a change for 9th edition, the 8th edition ability functioned identically. It was however not called Objective Secured, each faction had their own name for it for some reason.

Fast Rolling is a Hint not a Rule

Lastly, Fast Rolling. This is not a rule. It’s a hint. One that has only been printed once in the whole of 9th, it’s in the margins of the Core BRB.

Hints and Tips
Fast Rolling Dice
The rules for making attacks (pg220) have been written assuming you will resolve them one at a time. However, it is possible to speed up your battlers by rolling the dice for similar attacks together. In order to make several attacks at once, all of the attacks must have the same Ballistic Skill (if a shooting attack) or the same Weapon Skill (if a close combat attack). They must also have the same Strength and Armour Penetration characteristics, they must inflict the same damage, they must be affected by the same abilities, and they must be directed at the same unit. If this is the case, make all of the hit rolls at the same time, then all the wound rolls. Your opponent can then allocate the attack one at a time, making saving throws and suffering damage each time as appropriate. Remember, if the target unit has a model that has already lost any wounds or already had an attack allocated to it this phase, they must allocate further attacks to that model until either is is destroyed, or all the attacks have been saved or resolved. [BRB Only Page 221]

There’s four key aspects of fast rolling I’d like to draw attention to.

That’s all for this week, but I do have some more rules like these ones that I’ll cover next week. If you think you know of any others please do send them in, the links to do so are below as usual.