Death Guard have gotten a whole codex of new and interesting rules and this week on Ruleshammer I’m going to go through a few of the details and interactions that might come up. Most of them have answers too!

How do they work?

If every unit from your army has the DEATH GUARD keyword (excluding UNALIGNED units), this unit gains the following ability:

Nurgle’s Gift (Contagion): Whilst an enemy unit is within Contagion Range of this unit (see below), subtract 1 from the Toughness Characteristic of models in that enemy unit.


There’s been a lot of talk and previous about the Contagion range mechanic, which increments during the game. However there are a few key things to point about these rules. One common mistake players may make with this rule is completely forgetting about it when shooting with a longer range weapon at a unit near a friendly unit with a contagion ability – Contagion rules aren’t just active when a model with that ability attacks; just being near them reduces the enemy’s effective toughness against all attacks you might throw their way.

On that note, Nurgle’s gift isn’t the only contagion – there are others that you can gain access to and your whole army does not have to have the DEATH GUARD keyword to get them. Each Plague Company has a Warlord Trait that confers a different contagion ability. It is just the warlord (or the model with the trait) that has this though, not the entire army. Remember that being Battleforged means that your army is in detachments, and that all the units (in all detachments) share a keyword. For an army of Death Guard and Daemons this keyword would be CHAOS. So long as all the detachments are divided so that all the Death Guard are in their own detachment and all the Daemons are in other detachments, you still get to choose a Plague Company for the Death Guard Detachment.

In a Battle-forged army, all of the units in your army – with exception of those that are Unaligned – must have at least one Faction Keyword in common (eg. Imperium or Chaos) even if they are in different detachments. [Core Book pg245]

Though unlike Nurgle’s Gift, Plague Company contagions only benefit units from that same Plague Company. An example here is Ferric Blight, which only gives friendly INEXORABLE units a bonus to their AP when attacking an enemy unit in contagion range.

They are not Auras

I’m really glad GW took the time to say this rather than just labelling the abilities Contagions and not Auras but leaving it there for players to resolve. This makes it completely clear that abilities that disable, reduce or extend Auras don’t work on them. Before anyone gets any ideas though, they also don’t stack:

We not have a new rare rule that helps clear up if Contagions can be lost or gained by summoning and it’s good news!

‘IF EVERY UNIT IN YOUR ARMY’ RULES
Many armies have abilities that only apply if every model in your army has a specific keyword. For example, many units in Codex: Space Marines have the Combat Doctrines ability, but this rule only applies if ‘every unit in your army has the Adeptus Astartes keyword’ (with a few listed exceptions). The condition of ‘every unit in your army’ is checked once, after you have selected your army, which happens at the end of the ‘Muster Armies’ step of the mission sequences used in a mission pack, and such rules either apply for the duration of the battle or they don’t. If the condition is satisfied at the end of this step, then those rules will apply throughout the battle, regardless of whether or not new units are added to your army during the battle that might not satisfy this condition. Similarly, if at the end of the ‘Muster Armies’ step, this condition is not satisfied, then it will not apply for the duration of the battle, even if during the battle you suffer casualties to the point where all your remaining units would start to satisfy the condition.

It’s now 100% clear that if the Army met the conditions for Contagions when you mustered the army, then it keeps them for the entire game. They can’t be lost by adding units and they can’t be gained during the battle when the last conflicting unit is destroyed.

Finally note that the Greater Blight Drone from Imperial Armour Compendium just has the Nurgle’s Gift Contagion ability all the time because of how its rules are worded.

Whilst the new designer commentary for Fight Order is pretty comprehensive it’s still not a Fight Last ability. It has two effects.

So whilst it does make units within Range into Fights Normally it’s for slightly different reasons, the Stench Vats never causes a unit to become Fight Last. What’s unchanged is that they can still cause a unit to end up unable to fight at all under a specific set of circumstances. Specifically, the rules for which units can fight state that “An eligible unit is one that is within Engagement Range of an enemy unit and/or made a charge move in the same turn.” (Core Rules, “Fight Phase,” Paragraph 1), which means that a unit affected by this that is pushed out of Engagement Range as a result of removing casualties won’t be eligible to fight, as shown below: 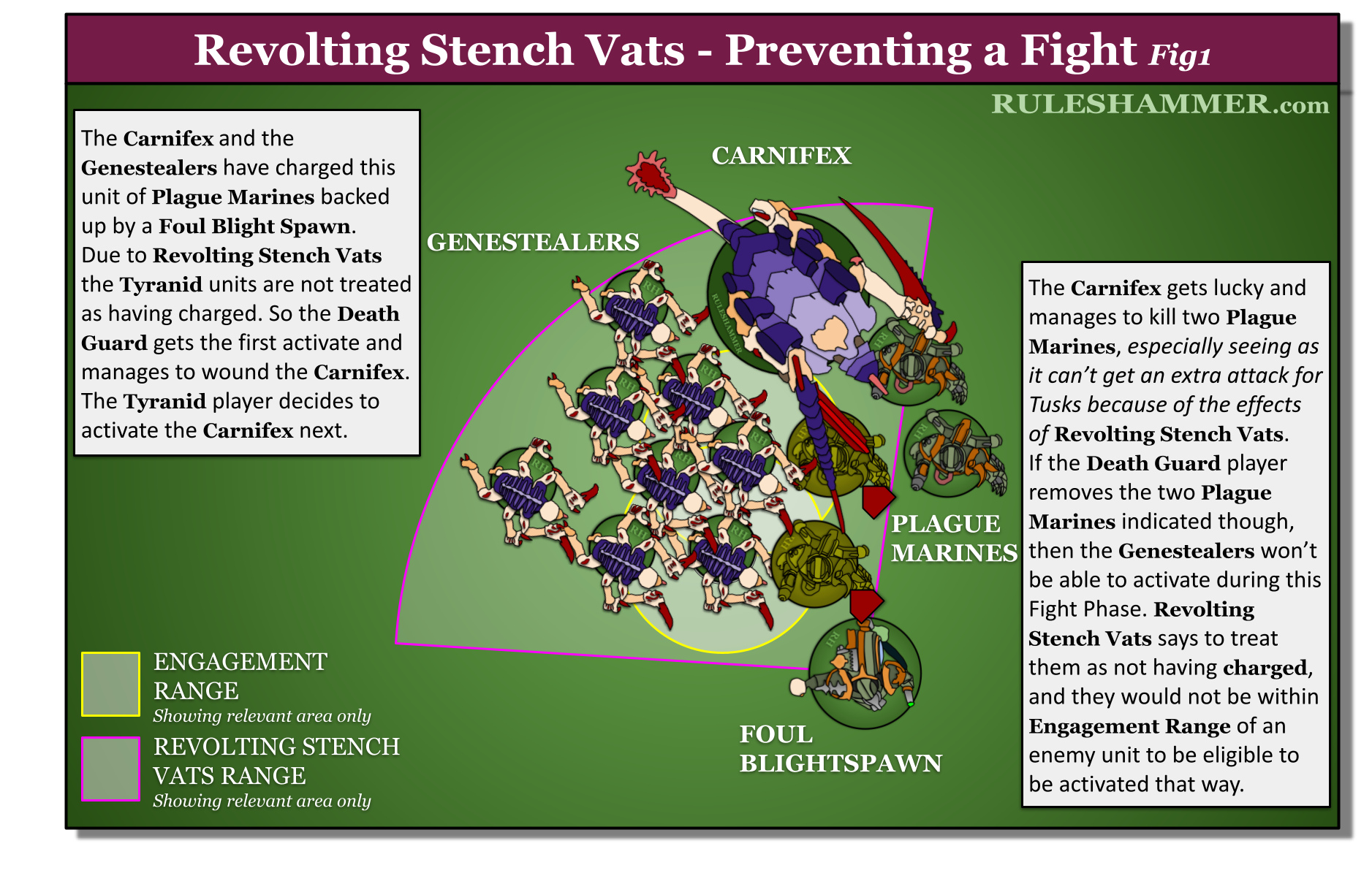 Honestly we think this is just a bit much but the Seven-fold Chant Rules as written is an 83% chance at getting an extra CP per Battle Round.  The reason is the wording of their ability.

At the start of the Command Phase, if this model is on the Battlefield, roll 2D6: on a 7+, you gain 1 command point.

It’s not the start of “your command phase” it’s both. So you have two chances per Turn of rolling for this CP. Warning maths ahead. The probability of a 6 or less on 2D6 is 15/36… the probability of failing twice can be found by multiplying it by 15/36 again. Making the probability of failing this over two attempts 17.36% (subtracting this chance of failure from 100% gets you the 83% chance of success I stated. It is still a maximum of one per round though that can be gained from this, on top of the CP per round you gain from missions currently.

TheChirurgeon: This seems like an oversight and something likely to be corrected in a future FAQ, so don’t get too used to it. 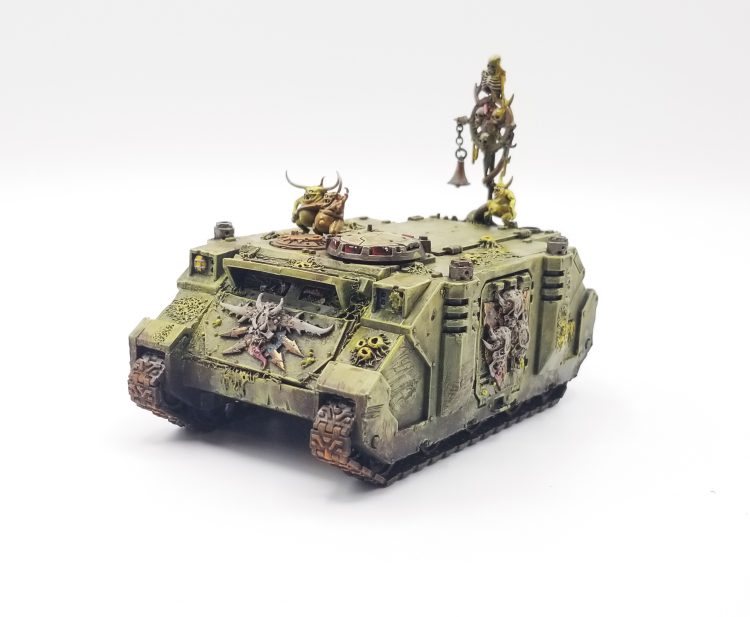 First things first, make sure you know which units actually have this rule.

This pretty much means marines and the tanks/walkers they managed to scarper with during the Heresy. Not Poxwalkers! The Daemon Engines also don’t get it though that’s perhaps less surprising.

Just a slight edit as the Remain Stationary FAQ got larger, essentially this is unchanged. Inexorable advance does not allow a transport to disembark models after moving even though it counts as “Remain Stationary.”

7. Even if a Transport model is subject to such a rule, embarked
models still cannot disembark from that Transport during the
Movement phase if that Transport has already moved, unless
that Transport (or the models embarked within it) have a rule
that explicitly allows them to disembark after the Transport
has moved.

The new FAQ stil firmly prevents that though.

No longer does this rule modify the abstract concept of “max distance” it now clearly modifies the movement characteristic and the charge roll.

Inexorable Advance: If this Unit has the Infantry Keyword, it can ignore any or all modifiers to its Move Characteristic, Advance Rolls and Charge Rolls

which Inexorable Advance now without doubt makes the unit immune to modification. This is progress, slow but inexorable progress.

I’m not sure if we’ve covered this but we’re three full codex releases into 9th edition (I’m not counting the supplements) and so far all three of them have included this new way that Bodyguards work in 9th edition. Gone are the old intercepting wounds mechanics that were often needlessly confusing and frequently differed in wording from faction-to-faction.

Bodyguard (Aura): While a friendly <PLAGUE COMPANY> CHARACTER unit that has a Wounds Characteristic of 9 or less is within 3” of this unit, enemy models cannot target that Character unit with ranged attacks.

Both the Space Marines and Necrons Codexes got units with this type of Bodyguard ability, and it’s worth covering how it interacts with some of the other shooting rules. 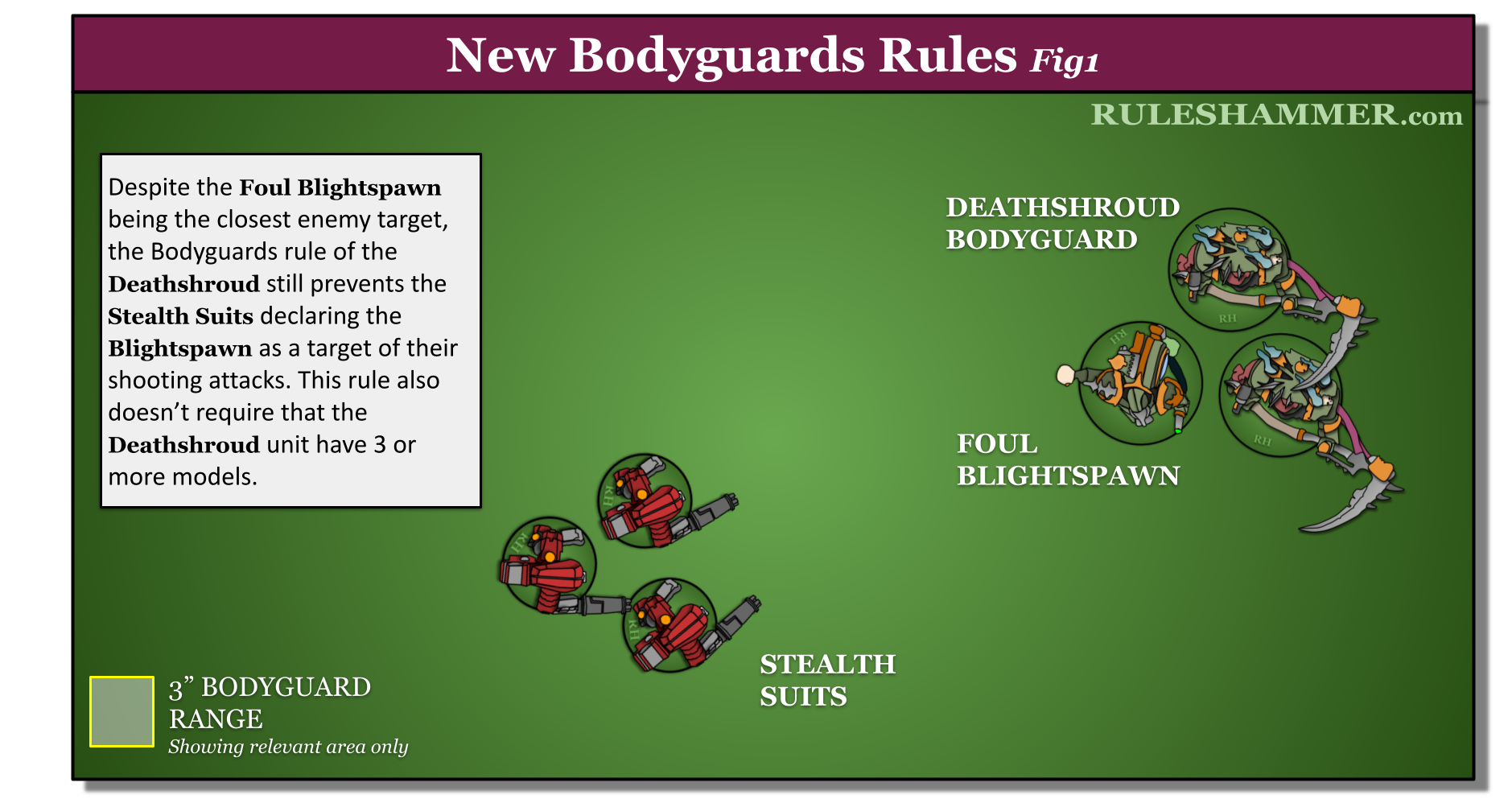 How does this work with Overwatch?

…Any rule that states the unit cannot be targeted unless it is the closest target (e.g. Look Out, Sir) does not apply when firing Overwatch.

The key thing to notice about how Overwatch disables Look Out, Sir is that it actually deactivates rules that prevent you from shooting at targets unless they are the closest target your unit has. The new Bodyguard ability is not this type of rule; its effects are not limited like Look Out, Sir’s to only preventing shots when the covering unit is a closer target. The unit also doesn’t need to be 3 or more models like a unit for Look Out Sir does (unless it’s a Monster or Vehicle).

How does this work against Snipers?

Bodyguards are Sniper proof so far in 9th.

Each time you select a target for this weapon, you can ignore the Look Out, Sir rule.

So until the Character is stripped of it’s close protection it is entirely untargetable (until someone reminds me of a Stratagem or ability I’ve not found that is a loophole to this). 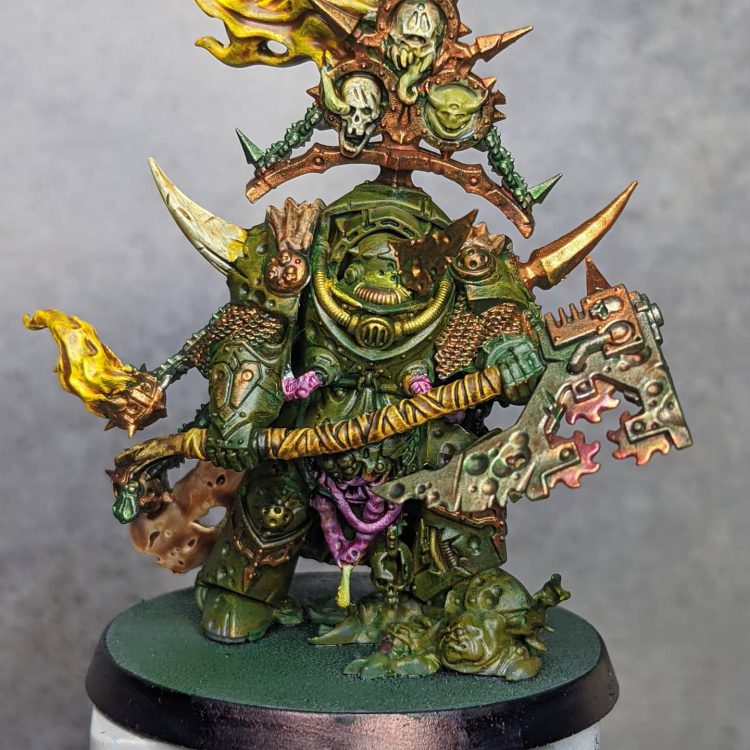 The Gloaming Bloat contagion prevents units within Engagement Range from re-rolling hit rolls or wound rolls. How does that interact with Miracle dice though? Best I can tell it doesn’t, here’s the specific rules on this to explain why:

Gloaming Bloat (Contagion): While an enemy unit is within Contagion Range of this unit:

Miracle dice are not however re-rolled, and also can’t be re-rolled themselves.

It then later says

When re-rolling a dice roll, no new Miracle dice may be substituted. The number and values of any Miracle dice that have already been substituted in the dice roll remain the same for the re-roll.

As these dice are treated as the original results and also subsequently already barred from being re-rolled they don’t interact with the Gloaming Bloat restriction.

Can you palace this Fortification closer than 3” other other terrain? Well at the minute it’s not actually very clear. Its deployment rules don’t specifically state that it ignores the restriction.

The question is if not mentioning the current limit but providing new ones counts as “otherwise stating” for the fortification deployment rule.

While I personally think it does count as “otherwise stating” doing so then leads to more questions, like if you can deploy these inside area terrain. I don’t think there’s going to be an actual answer on this though until the Death Guard FAQ.