Ruleshammer: How Many Models Can Fight in the Fight Phase?

The Core Rules in Question

From the Warhammer 40,000 Core Rulebook:

So this creates two conditions for being in combat:

How does this work in practice though?

This would be an odd scenario and it’s unlikely to occur. In this situation only 2 models would be able to attack the Target unit. Let’s look at a more common scenario: 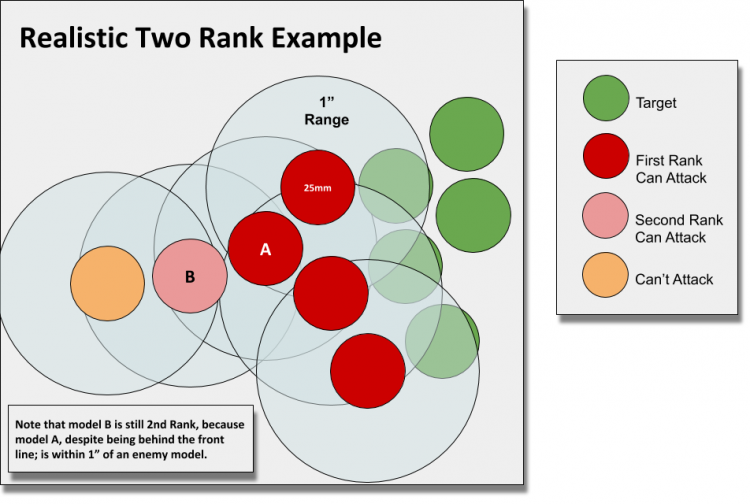 This scenario is far more realistic and would better reflect model placement after the “Pile In” move has been completed. In this example 5 models would be able able to attack. Some would argue that this isn’t the intention of the combat range rule, so lets check.

What do the FAQs have to say?

Below is the FAQ concerning the “two ranks” rule. Many players have taken this sentence to indicate a limit rather than provide clarification:

Q: In the Fight phase rules, under Choose Targets, the third sentence states ‘This represents the unit fighting in two ranks’. Does this mean I should only fight in two ranks even if I can physically fit more than that (such as with 28mm and 32mm bases), or is this just an abstract description of what this rule does?
A: This was intended to be an illustrative piece of text, creating an image of how models further back would fight. It was not intended to limit the actual number of models that are able to fight. The number of models that can fight is described in the first and second sentence.

This makes it quite clear that more than 2 ranks are allowed but what are the extremes a player can push this to? 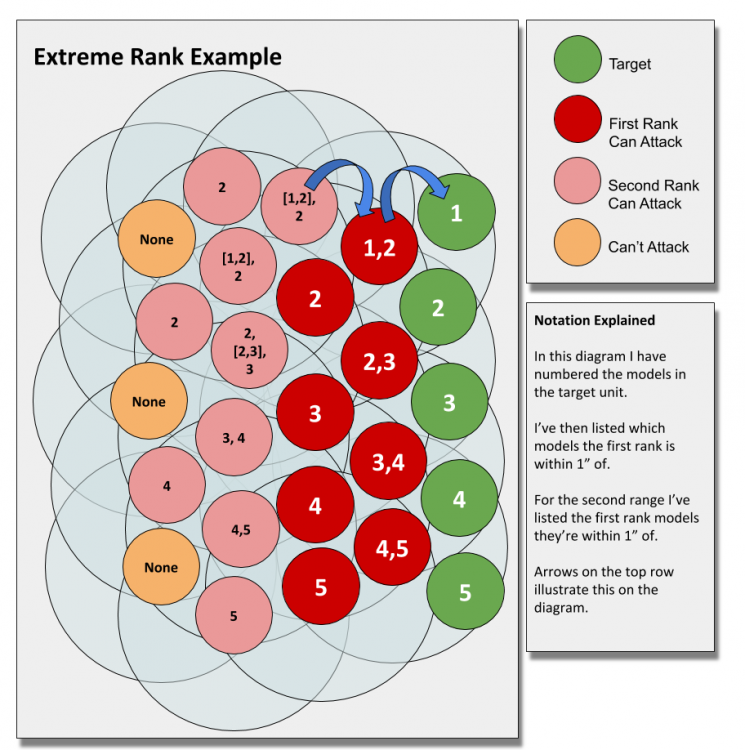 Please excuse how obviously cluttered and busy that diagram has become; but in this utterly perfect charge and pile in the enemy has managed to get 17 models in combat range. However before you panic, this is ridiculously difficult to achieve in a real life game for a variety of reasons:

Models Often Extend Over Their Bases
Lots of 25mm models have parts that extend off the edges of their bases, combat experts like Genestealers are far larger than the 25mm base the come with (although Genestealers from standalone games are on 32mm, bear that in mind). Actually managing to get these models to pack in so perfectly is not really possible for a lot of these models, not with their bases flat to the board (which they have to be). Note: This is more about how diagrams are always just an abstraction of reality, technically there’s no rule against a horde of Genestealers managing to tessellate perfectly as above. It would just take more time to do that than most players would expend attempting it, because of their awkward size.

The Effects of Terrain and Scenery
This example entirely ignores the existence of terrain, and further demonstrates how important terrain is to any game. Barricades for example do not change the second condition, they just change the first;

When a unit charges a unit on the opposite side of a barricade, the charge is successful if the charging unit can end the move within 2″ of the target unit instead of 1″. In the Fight phase, units on opposite ides of a barricade can be chosen to fight with and can make their attacks if there is an enemy unit within 2″ instead of 1″. 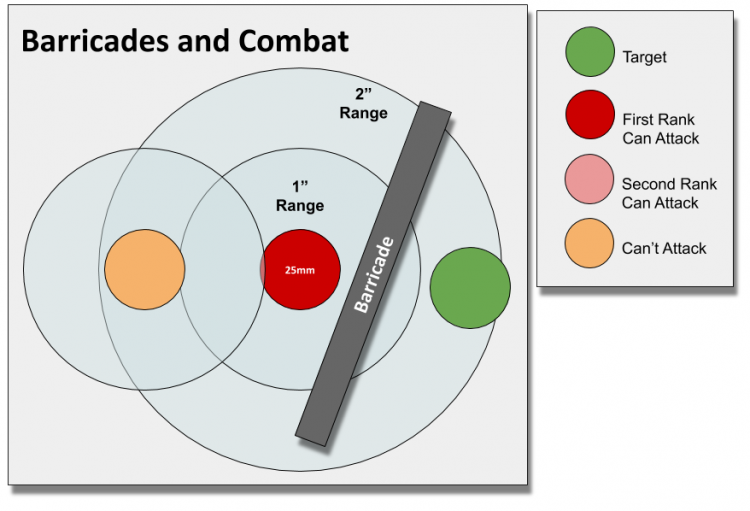 In this scenario the Red and Orange models have charged at the Green’s position behind the barricade, and this is their position after piling in (unrealistic I know, but it’s a hypothetical). To be able to fight in combat the model needs to either be:

The red model has reached their target, and the Orange model is within 1″ of red but because Red isn’t within 1″ of the enemy they don’t meet the second condition, and would be unable to target the enemy unit in the Fight phase. In a more realistic situation this would more likely be their pre-Pile In move state, and the 3″ Pile In move would be enough to get both into combat. There would still be no second rank however unless one of the front rank models was within 1″. Side note: As we noted in our review of Chapter Approved 2019, Barricades have the interesting effect of reducing the necessary distance for charges that occur after a “Deep Strike”: While you still have to deploy your models more than 9″ away, the charge succeeds if you can end your Charge move within 2″ of the enemy model, reducing the required roll to 8″ before any modifiers. Maybe don’t hug Barricades too closely with this in mind.

What about larger bases? 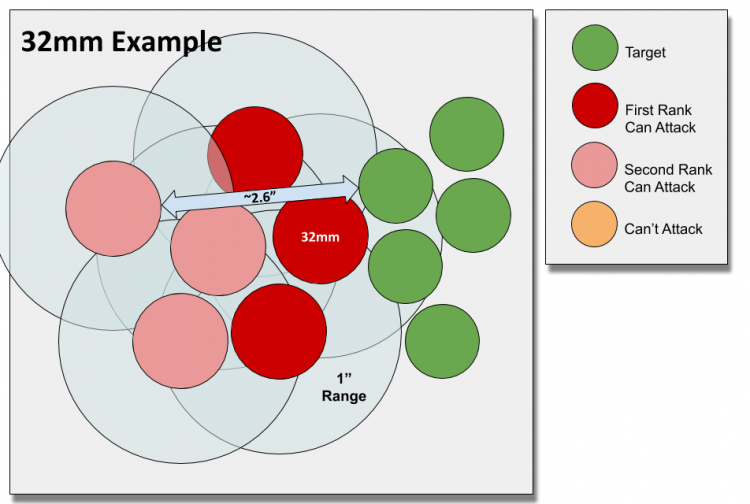 The rules for getting into combat are actually rather forgiving for larger base. Despite being roughly 2.6″ away from the target unit, that rear most model would still be eligible to attack. This leads however to the last question this blog will cover;

Q. What if the opponent removes the models from their front rank, do I need to slow roll everything?

The short answer is: No. Here’s why again from the core rules:

Any unit that charged or has models within 1″ of an enemy unit can be chosen to fight in the Fight phase.

The checks for “Who Can Fight?” range happen when you select a unit to attack with, not when you select a model (this is the same for shooting, and it’s why removing models can’t prevent a model from firing twice for rapid fire or other similar range-based rules). So to clarify this whole section a little:

I hope this article has helped to explain some of finer detail of the combat range rules. Have a question or want to discuss these rules? Join the Discussion on Reddit Here or drop a note in the comments below if you have any questions or feel I’ve made any mistakes, or email us at contact@goonhammer.com. I’ll try to reply or maybe your question will inspire a future article.