With a massive and admirably comprehensive FAQ released last week, Vre’kais is once more donning the powerful robes and wig of Judge Ruleshammer and working through past articles, making sure they’re all up to date with the latest rulings, and then turning to some previously ambiguous questions that the new rules shed more light on. Today, it’s the turn of the Imperium for some renewed legisltative scrutiny.

Welcome to another Ruleshammer, this time June updates for Ruleshammer Codex: Space Marines, Dark Angels and Mechanicus. I will get to the other Marine chapters, honest. Find out how to send in your questions at the bottom or join our patreon to come ask me them on discord!

So this clears up so much about these abilities and represents a significant change for Combat Squads on the what was the consensus before. Whilst Deploy Armies did have a lot going for it as when “deployment” was, it never did quite line up with how other abilities were worded that took place in the “declare reserves” step. So what’s changed? Well we now know that deployment is in fact from the that declare reserves step. Here’s the new Rare Rule.

AT THE START OF, DURING AND AFTER DEPLOYMENT
These terms are commonly used in many rules. We wanted to clarify when each of these happens in the mission sequences that appear in mission packs such as Open Hostility, Eternal War etc.

So now we know that Combat Squads happens BEFORE declaring reserves, which changes quite a bit. You can’t put a single unit into reserves using a stratagem such as White Scars Outflank, and then split it into two units afterward. On the other hand, you can decide to split up a unit that has a deepstrike ability and then only use that ability for one of the two new units, giving you a bit more flexibility.

Grim Resolve and Steady Advance – does this work?

I wrote a lot about this interaction before to come to the conclusion that I wasn’t sure. I think the new FAQ though does resolve this and the answer is that it works. Here’s a reminder of what Grim Resolve does

Each time a model with this tactic makes an attack, unless that model’s unit has moved this turn (excluding Pile-in and consolidation moves), add 1 to that attack’s hit roll.

And then the Steady Advance stratagem from Codex Space Marines:

Use this Stratagem in your Movement phase, when an ADEPTUS ASTARTES INFANTRY unit from your army makes a Normal Move. Until the end of the turn, that unit is considered to have Remained Stationary.

So how does the new Remain Stationary FAQ address this?

Rules That Count As Remaining Stationary
Some rules allow a unit to count as having Remained Stationary, or count as if it had not moved, even if that unit has moved during its Movement phase. The following rules apply to these type of rules:

5. Such rules mean that any other rules (abilities, Stratagems etc.) that are used or triggered when a unit Remains Stationary (e.g. Grinding Advance) can be used/are triggered.

The rare rule establishes pretty clearler that “having Remained Stationary” is equivalent to “count as if had not moved”, meaning that I feel these terms are finally interchangeable without too much debate. This really helps with some older rules. As Grim Resolve is a rule triggered if the unit hadn’t moved this turn, counting as Remaining Stationary is now pretty clearly the same thing, so it triggers. This does mean that the unit would have +1 to hit with attacks in a turn it charged, as it counts as remaining stationary for the entire turn. You still ccan’t use Steady Advance to gain either Advance and Charge or Fall Back and Charge, however, as the stratagem can only be used on a unit that has made a Normal Move.

Jink can still be gained without actually changing position, for the 5++ version as when doing a Normal move 0″ is less than your move characteristic, the model still counts as having moved though. Similarly advancing for the 4++ invulnerable doesn’t require the models actually move anywhere but once it’s declared they count as having Advanced even if they remain in the same physical place on the board.

Death on the Wind got sensible

As a reminder here’s the text of the secondary objective:

Score 2 victory points each time an enemy unit is destroyed by an attack made by a RAVENWING model from your army that moved 12″ or more during the Movement phase of that turn, or made a charge move that turn.

Previously there was no rule on the 12″ requirement that clarified if the 12″ needed to be total distance moved or displacement. So many argued that a model could move 6″ forward and 6″ back and be a valid unit to score VP for this objective. Not any more.

It’s now specifically the displacement. Though this does make the objective significantly harder to score. It’s very possible when moving around terrain with units like bikes to move more than 12″ but end less than 12″ displacement from where they started. 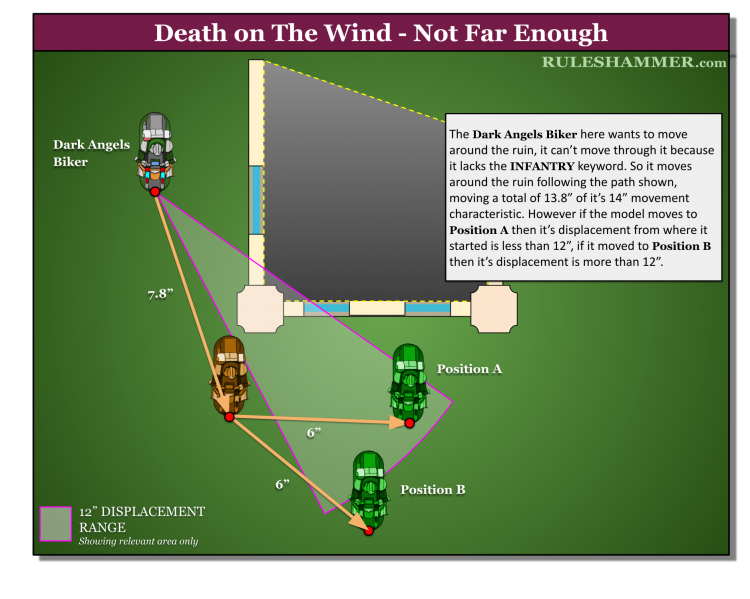 Are Ruststalkers immune to Difficult Ground?

Ruststalkers have the Optimised Gait ability:

Previously this ability would not have ignored Difficult ground because the original wording of that rule didn’t modify the move characteristic, advance rolls or charge rolls. The new rule does modify them though.

So Optimised Gait can now ignore the effects of Difficult Ground, something that also gives a nice helping hand to Death Guard over in Chaos land.

That’s it for this set of updates. Have any questions or feedback? Got a rules question you want answered? Drop us a note in the comments below, ask a question in our Ruleshammer form, or head over to r/ruleshammer to discuss.