Ruleshammer: Page 2 of the 40k Rules, Coherency, and Avoiding Traps

Although we love Warhammer 40,000, the game’s complexity can be daunting, particularly for newer players. In Ruleshammer, we look at the nuances of the game’s rules and how they affect gameplay, clearing up potential issues and helping make sense of some of the game’s less common interactions. In today’s Ruleshammer, Rob “Vre’kais” Chilton is looking at the unit coherency and how to avoid trapping yourself in bad positions.

Today we’re going to talk about Page 2 of the Warhammer 40,000 Core Rulebook. Specifically, why it’s important (and why it’s awful).

First let’s look at the guilty party in question: 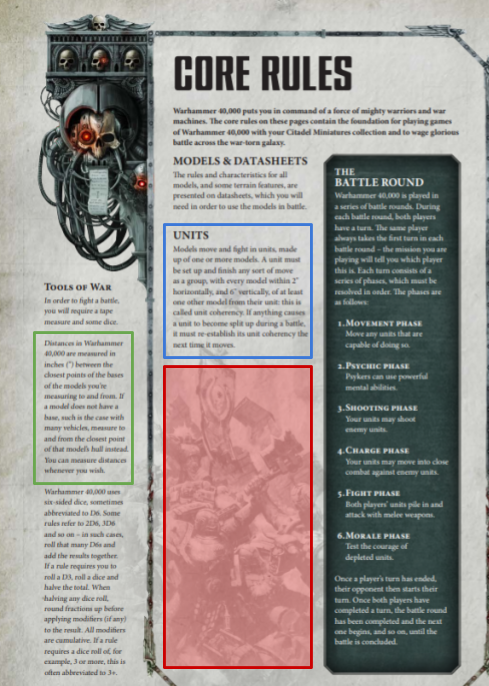 Lets start with the two things this page actually covers, other than the Battle Round:

In my opinion those are two fundamental parts of the game but they are hidden here on this page BEFORE the actual rules for a turn, which starts on the next page with the Movement Phase.

Let’s look at these rules in more detail

Distances in Warhammer 40,000 are measured in inches (“) between the closest points of the bases of the models you’re measuring to and from. If a model does not have a base, such is the case with many vehicles, measure to and from the closest point of that model’s hull instead. You can measure distances whenever you wish.

This isn’t especially different to previous editions. However what has changed is the number of models with bases that matter for measurement purposes and the way measurement works. Where previously you might measure from a model’s weapon to determine distance, for models with bases like Imperial Knights, ranges are now measured from the bases. This can lead to some edge cases where targets are high enough above their bases that some weapons are out of range due to the increased vertical distance. It’s good practice to check pre-game what is measured to base and what is measured to hull, as it’s not entirely consistent: Tau Piranhas for instance are VEHICLES that come placed on flying skimmer stands but don’t have the hull measurement rule. This does lead to the amusing issue that if a Tau player takes them as a unit, their bases need to be within 2″ of each other; as the model is almost a whole inch wider than its base it almost requires them to be tesselated.

On The Topic of Coherency

Models move and fight in units, made up of one or more models. A unit must be set up and finish any sort of move as a group, with every model within 2″ horizontally, and 6″ vertically, of at least one other model from their unit: this is called unit coherency. If anything causes a unit to become split up during a battle, it must re-establish its unit coherency the next time it moves.

Okay so this is honestly just a bit of a dumpster fire. This whole section is titled as “Units” but after the first sentence it’s about Coherency. Important things to note in this section:

Don’t do this to yourself. This was an avoidable situation by the green player; maybe those two models are the Sergeant and weapons specialist, maybe the models with the most attacks. Suffice it to say that if they’re not dedicated combat units, have above average movement, or have the FLY keyword, they are currently stuck. They can’t move through the Purples to get back to coherency and wouldn’t have enough movement to move around them either. There are still things the Green player could do to resolve this, such as having the blue unit Fall Back and then potentially moving the green unit back into coherency with their Fall Back move. It’s very rare for a unit to be permanently stuck in this way with nothing that can be done, but the bigger issue here may be that you wanted the blue unit to remain in combat.

The last thing to cover is how I’d go about fixing this page: The section I highlighted in red is being totally wasted while important information is being scribbled in small writing in the margins. Why does a rule set need “small print”? The rules on this page are often forgotten or overlooked and in my opinion that is mostly due to the layout of this page and the lack of importance it assigns to its contents. Measurement and Coherency are fundamental concepts in 40k, and deserve better.

Excerpts of which were used with highlighting for academic critiscism, I’m not a real lawyer but it’s a free document.