A whole Ruleshammer without any diagrams last week just did not feel right, so I’ve tried to make up for this this week with one massive one. As ever keep the questions coming, or even just rules you think would really benefit from some diagrams! Details on how to get in touch are at the bottom.

Question 1 – How does the new Reanimation Protocols work?

The new Necron reanimation is quite a change from the old one, some part of it are easy to mistake for being similar to an ignore wounds ability. As such I have put together a few examples to help illustrate how this ability works. 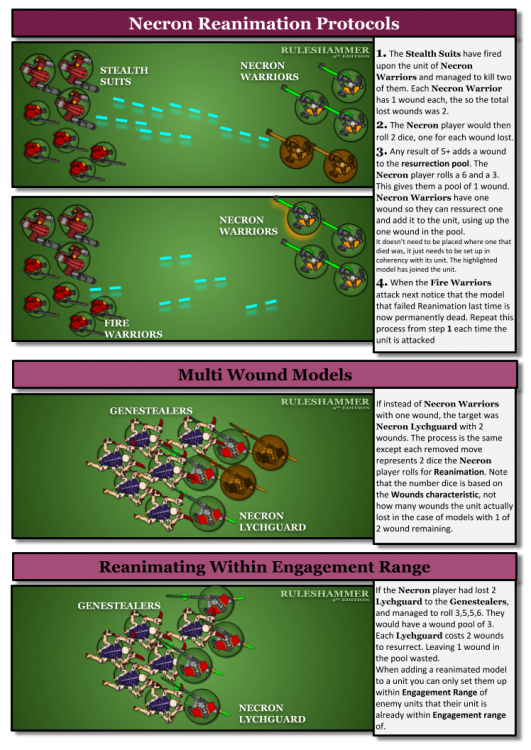 I hope those examples are helpful. Generally the new reanimation protocols are somewhere between the old version and a normal ignore wounds ability (often referred to as a Feel No Pain or FNP). For single wound models it’s a lot stronger than a normal FNP because it ignores extra damage, it’s just a single roll. For multi wound models it varies in its effectiveness compared to a FNP depending on the circumstances (generally better against massive overkill, but weaker as the wounds per model increase) but it’s less effective than the old Reanimation Protocols was for them as they now need to succeed multiple times to bring back a model.

Question 2 – Can I Summon Daemons in Turn 1

I know this has gone back and forth a lot throughout 8th, but in 9th it’s I think a bit clearer. Summoned Daemon units are not reinforcement units, they are just treated like them.

They’re not reinforcement units because they’re not “set up” somewhere other than the battlefield, the don’t exist until you summon them.

This unit is treated as reinforcements for your army and can be placed anywhere on the battlefield that is wholly within 12″ of the character and more than 9″ from any enemy model. If the total rolled is insufficient to summon any unit, the ritual fails and no new unit is summoned

Being treated as reinforcements means that rules that action triggers like Auspex scan would apply, and the models summoned count as having moved. As such you can summon units in any turn, and unused reinforcement points don’t count as destroyed units at the end of the game. Those rules only apply to actual Reinforcement Units, which Summoned Units do not meet the definition of.

I’ve got a question about moving through engagement range for Canoptek wraiths. The wraiths’ “”wraith form”” ability indicates that when they make a normal move, advance, fall back, or charge, “”until that move is finished, models in this unit can move horizontally through models and terrain features (they cannot finish a move on top of another model, or its base).”” It would seem to me that this lets wraiths move into and out of enemy models’ engagement range, which would make them amazing assassins. But I also know that many of the abilities in 9th that allow such a thing to happen specifically indicate that a model can move within engagement range of enemies (like the aircraft rule). Do you think this ability does allow wraiths to move through enemy engagement ranges, or is it more to allow them to pass through friendly units?

Thanks a ton, and keep up the awesome work! – Dave Rini

First of all, thanks for the feedback, I will try to keep helping for as long as there’s confusion to unpick. Moving on though; yes these abilities did seem to be missing the specific ability to ignore Engagement Range movement limitations when 9th first debuted. I even wrote about this in the first few weeks of 9th because similarly the ability to move within Engagement Range of none targets when making a Charge Move with a unit that can Fly also seemed to be missing. Considering how specific it’s inclusion in the movement phase Fly rules were, I actually thought this was deliberate at the time. It made things like Flip belts and the Wraith Form abilities more distinct from flight as well as, mostly allowing them to move through friendlies and be generally immune to being locked in combat. However despite there being arguably some nuance and upsides to this (in my opinion) it was 100% confusing and just felt generally too subtle. Plus having this debate was generally just not fun mid game. 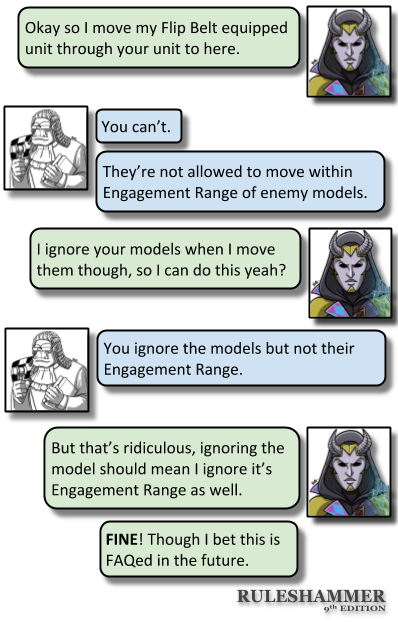 And it was FAQed, they added a whole new Rare Rule for it in fact.

Some models have a rule that enables them to ‘move through/over models’, or ‘move through/over models as if they were not there’. Sometimes such a rule will only apply to specific types of movement (e.g. Normal Moves, Advance moves, charge moves etc.) while other times it will apply to all types of movement. In any case, when moving a model with such a rule, it can be moved within Engagement Range of enemy models, but it can never finish a move on top of another model, or its base, and it cannot finish a Normal Move, Advance or Fall Back move within Engagement Range of any enemy models, and it can only end a charge move in Engagement Range of units it declared a charge against that phase). [Core Rules FAQ Pg3]

Which makes it clear that you can move within Engagement Range of models you are otherwise able to move over or through, as long as you don’t end your move there. This also affects Charge Moves using Fly as well.