This week in Ruleshammer we’re covering some more questions submitted by you, the readers!

Do I score VP for units that are destroyed and then resurrected?

Resurrected models and destruction condition. Would a unit destroyed that was resurrected still count as a unit that “was destroyed” for the purposes of scoring Secondary Objectives such as grind them down or for rules like Adeptus sororitas’ Vengeance? – Tomás

This is an interesting question – there’s some nuance here because Resurrected models require a unit for them to be added to. For instance Necron Reanimation requires that the unit not be destroyed in order to use the ability:

Each time an enemy unit shoots or fights, after it makes its attacks, if any models in this unit were destroyed as a result of those attacks but this unit was not destroyed, this unit’s reanimation protocols are enacted and those destroyed models begin to reassemble.

So Grind Them Down or Vengeance would not score points here because they didn’t destroy the unit. There are rules that create replacement units though, often with fluff about it being bring a unit back to life. However mechanically in the game these are entirely new units:

Some rules allow you to add new units to your army during the battle, or else replace units that have been destroyed. If you are playing a game that uses a points limit, then you must set aside some of your points in order to use these rules; these are your Reinforcement points. Each time a unit is added to your army during the battle, subtract the points of that unit from your pool of Reinforcement points. If there are not enough points in your pool to pay for the unit, you must either decrease the size of that unit (but no smaller than its minimum unit size) or the number of weapon options the unit has until you do have enough points to pay for it, otherwise it cannot be added to your army.

As such you would still have destroyed a unit for the purposes of Grind Them Down or Vengeance. The unit brought in to replace the dead one is a new unit even if it’s using the same models.

This doesn’t end there though because there are some rare abilities that cause a model to regain some wounds and not be removed from play after being destroyed, without a unit such as the Resurrection Protocols Stratagem from Codex: Necrons:

Use this Stratagem in any phase, when a NECRONS INFANTRY NOBLE or NECRONS INFANTRY CRYPTEK model from your army is destroyed. You can choose to roll one D6 at the end of the phase instead of using any rules that are triggered when that model is destroyed (e.g. the Surrogate Hosts abilities). If you do, then on a 4+, set that model back up on the battlefield as close as possible to where they were destroyed and more than 1″ away from any enemy models, with D3 wounds remaining. This Stratagem cannot be used to set the same model back up more than once per battle.

However whilst a bit more ambiguous I would still argue that this model has been destroyed, so it would count for the tally for Grind Them Down. It might well count for that tally again though later on in the game. Thin Their Ranks is very specific about such models and makes it clear that they can count twice. I think on several reads of the Stratagem though, it doesn’t say the model doesn’t count as destroyed in the round and I would continue to count it. Note that this isn’t the case for the Cut off the Head Secondary Objective, which explicitly suggests that a destroyed Warlord that returns to the battlefield counts as being destroyed in whatever the battle round it was “last removed from the battlefield,” which suggests either that they’re worth fewer points if you kill them a second time or zero points if you fail to do so. 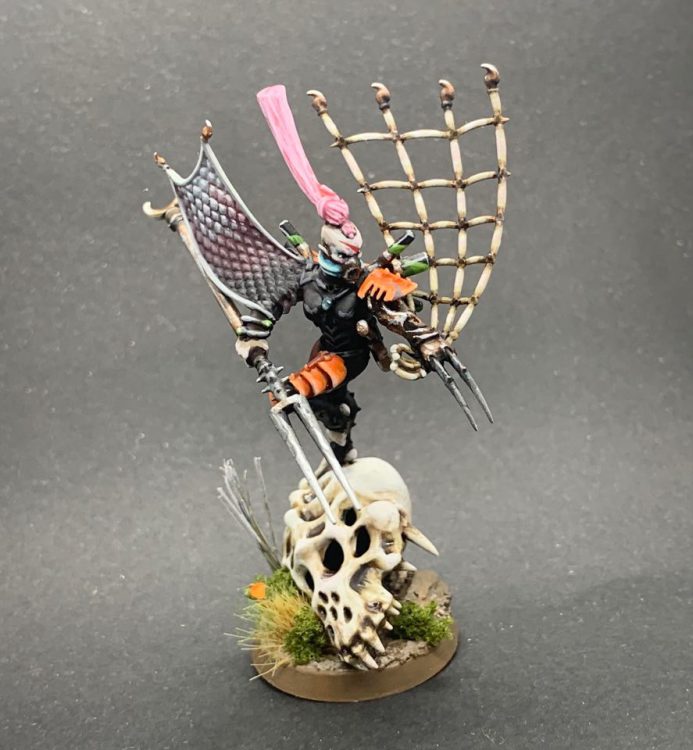 How is the following played? “Make 3 hit rolls for each attack made with this weapon, instead of 1.”
1. I have 3 chances to score a hit with each attack my character has (i.e rolling three dice per attack gives me a greater chance to score a hit with each single attack because I am rolling 3 dice for that 1 attack)
2. My attacks are multiplied by 3 (i.e Attack characteristic of 4 is now 12) – Vinnie

The answer to this is that you make 3 separate attacks. If you have a model with a melee weapon that says “make 3 hit rolls” and the model has 4 attacks. Then yes that’s 12 attacks. There’s a rare rule on this:

ATTACKS THAT MAKE MULTIPLE HIT ROLLS
Some rules, typically weapon abilities, tell you to roll more than one hit roll for each attack made , e.g. ‘each time an attack is made with this weapon, make 2 hit rolls instead of 1’. In these cases, each hit roll is treated as a separate attack that is made against the same target. As such, all normal rules that are triggered by attacks, or that apply to attacks (such as re-rolls or modifiers conferred by other rules) apply to each ‘hit roll’. Note that these additional attacks do not themselves result in more hit rolls being made.

There are also some models that only have such weapons, and you might wonder, “why doesn’t the model just have that many attacks?”. I think generally the reason for this is because of how targeting works. If you have a model with 2 attacks, and the weapon provides 2 hit rolls per attack. The model can still only target a maximum of 2 units, you declare the targets for each attack the model has and what weapon it will be using. At this point the unit still only has 2 attacks. Then when you resolve those attacks the ability to make multiple hit rolls kick in. Prime examples of this are things like an Imperial Knights titanic feet, pooling these attacks into a single target unit is like that one foot is squashing several enemy models.

Disembarking from transports that arrived as Reinforcements

The core rules say that a unit cannot disembark if the transport has moved normally, advanced or fallen back, however, deeps striking is none of those.
Does the absence of the immediately disembarking mean that the Chaos player can choose to disembark on the first turn or not, while the space marine player must disembark?

I have read that Chaos cannot disembark on the first turn, but do not understand how a lack of the final sentence of the rule ensures they cannot. – Matt Gilbert

If a unit starts its Movement phase embarked within a Transport model, that unit can disembark in that phase so long as the model itself has not yet made a Normal Move, an Advance or has Fallen Back that phase.

Fortunately, this is covered in more detail in the Core Rule FAQ, in the Rare Rules section on Transports that count as having Remained Stationary:

Transports that arrive as Reinforcements count as having moved, and units cannot disembark from a Transport after it has moved, even if that Transport has a rule that lets it count as having Remained Stationary.

Even without this additional rule, Games Workshop definitely think that a unit can’t get out of a Transport that has just been set up. We can tell this because they wrote a Stratagem that allows a unit to do this in Codex: Drukhari:

Murderous Descent: Use this Stratagem in the Reinforcements step, after a TRANSPORT unit from your Army is set up on the battlefield. Any units embarking upon that TRANSPORT unit can disembark after it is set up, but when they do so, they must be set up more than 9” away from any enemy units.

LIkewise, it’s clearly the case that Games Workshop intend for any models set up as reinforcements to be set up more than 9″ away from enemy units, so we should treat as suspect any interpretation of the rules that allows players to circumvent this. So lacking such a stratagem for Dreadclaws you’re stuck The units must wait a turn before they can disembark. TheChirurgeon: It’s also important to note that no one in the competitive scene seriously thinks that  you get to disembark from an arriving transport by default, and the existence of rules and stratagems that allow you to do so are a pretty compelling argument in favor of that interpretation, even if there weren’t an FAQ item explicitly outlining this.

When has a unit Fought?

When is a unit considered to have “fought”? Is it after their attacks are resolved or after their consolidation move? Thanks! – Dan

Fighting in the fight phase is a collective term defined on page 21 of the Core Rules PDF.

When you select a unit to fight, it first piles in, then the models in the unit must make close combat attacks, and then the unit consolidates.

This defines what it means “to Fight,” so “having Fought” is having done all of that. In practical terms this means that a unit has fought after it has completed its consolidation move. This is also probably why a unit that doesn’t move for consolidation is still counted as having consolidated; otherwise the game would technically consider them to not have fought.