Welcome to Ruleshammer, a collection of resources to help explain the detail and complexity of some of the more confusing rules in Warhammer 40k, this week we’re covering some more questions submitted by you, the readers!

Mortal wounds are single wounds that do 1 damage and can’t be saved against.

Each mortal wound inflicts 1 point of damage on the target unit, and they are always applied one at a time

For instance if you were hit by an attack that successfully wounded 5 times, and 2 of those wound rolls were 6s causes 1 mortal wound each. You would allocate the 5 normal wounds first, one at a time. Making saves and applying damage each time. Then once done with those you then allocate the Mortal wounds you have one at a time, except no saves can be made and when you apply damage to always do just 1 (you can use an ignore wound ability against them).

Can a resurrection orb reassemble a necron warrior that flee?

and the Morale phase has this to say on if models that flee count as having been destroyed.

You decide which model from your unit flees – that model is removed from play and counts as having been destroyed, but it never triggers any rules that are used when a model is destroyed.

The last part of this rule is confusing but it’s just saying that abilities that are triggered on “when a model is destroyed” don’t work for fleeing. If it meant “all rules about destroyed models don’t work” then units being destroyed by morale would stop count for VP from secondaries and a whole slew of other issues.

This is an interesting one, I can certainly see the RAW here that no Close Combat Weapons wouldn’t be affected.

While this combat doctrine is active, improve the Armour Penetration characteristic of every Pistol and Melee weapon that models in this unit are equipped with by 1.

Opinion: I’m not sure I’d actually recommend this rather niche RAW be applied though, if that makes any sense. I’d like an FAQ on it either way but I think I’d still recommend playing that units gain the CCW for that attack and therefore the extra AP. There’s a possibility this is also intended though and it would also mean that Tau Advanced Targeting Systems don’t increase the AP of their CCW attacks. I’d make this part of the pregame discussion for sure.

A model equipped with an advanced targeting system increases the AP characteristic of all of its weapons by 1 (e.g. an AP of 0 becomes -1, an AP of -1 becomes -2).

Though that wargear doesn’t specify “equipped”, just “its weapons”.

EDIT: A helpful read pointed out that the glossary does support Assault Doctrine and Close Combat Weapons working as expected.

Close Combat Weapon: Default meleel weapon that a model is equipped with if it has no other equipped melee weapons [pg 75].

My only dissapointment is that this contradicts the page it references, the full rule doesn’t specifically equip models with CCWs. And the glossary definition doesn’t equip models that can’t make attacks with the melee weapons they are equipped with as it doesn’t mention that clause of the full rule.

Wings Note: strongly agree with Rob here that you should play this as if you do get the bonus for the built in CCW – this looks like an unintended side effect of making the basic CCW not an “equipped” weapon (which fixed some other wonky rules) rather than something intentional.

Death Guard – Bringing Back Pox Walkers in a chain

What are the limits for setting up / adding previously destroyed poxwalker models to their unit when using the Death Guard stratagem ‘The Dead Walk Again’? Must the previously destroyed poxwalkers be set up in unit coherency with models in its own unit which were themselves on the battlefield at the start of the turn (consistent with an 8th Ed FAQ)? Or can this stratagem be used to to ‘daisy chain’ the added models several inches towards an objective or enemy, provided unit coherency for the overall unit is maintained and no models are set up within engagement range of an enemy unless that unit was already within engagement range of that enemy?

So if I’ve understood the question correctly then some limited chaining is possible based on my read of the rules. Though I know for a fact that it’s not a cut and dry issue. The rules I rely on are here in the Unit Coherency section.

Some rules allow you to add models to a unit during the battle, such models must always be set up in unit coherency with the unit they are being added to. Sometimes there will be insufficient room to set up all models from a unit, or it will not be possible to set up all the models so that they are in unit coherency. When this is the case, any models that cannot be set up are considered to have been destroyed.

I covered this before with Necrons, which function in a similar way so here’s a diagram of my read on how these abilities work. 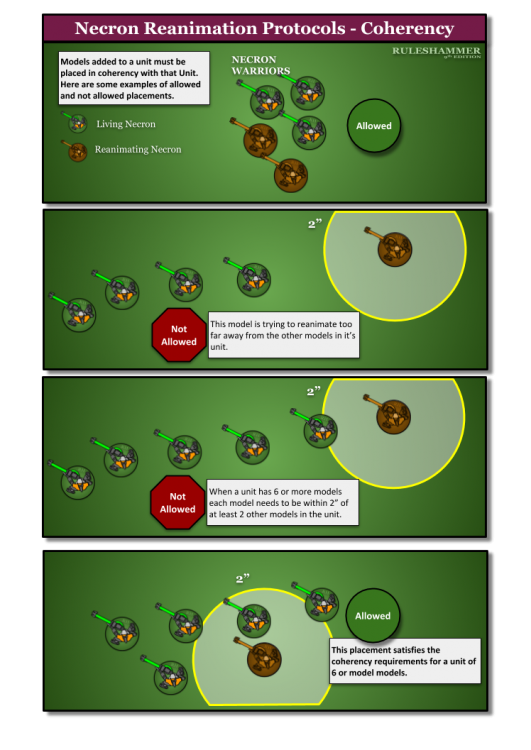 So I don’t think the Unit Coherency rules create a situation where you need to be coherent JUST with models that were already on the board though. There are a few issues though that make all of this ambiguous. Necron reanimation is quite specifically bringing back one model at a time. Dead Walk again is slightly more vague on this. Though personally I still think it’s one a time because of the “for each” phrasing.

Use this Stratagem in your Command phase. Select one POXWALKERS unit from your army and roll seven D6s: for each 3+, one of that unit’s destroyed models is added back to it with 1 wound remaining. Models added back to that unit in this way can be set up within Engagement Range of enemy units that are already within Engagement Range of that unit. Each unit can only be selected for this Stratagem once per battle.

In programming that’s a pretty clear loop, doing that same thing until you are out of 3+ rolls. The other point of contention is the definition of Coherency in the Glossary of the BRB or GT2020 rules.

UNIT COHERENCY: The distance within which models in a unit must remain with each other. This is 2” horizontally and 5” vertically. Units must end any kind of move in unit coherency [pg58].

That page quote is actually part of the entry in the glossary though (in GT2020). It takes us back to start of the first set of rules I quoted. There is an argument that placing a model in coherency is just subject to the “be within 2” horizontally and 5” vertically” and not the second level of restrictions imposed on units of more than 5 models.

A unit that has more than one model must be set up and finish any sort of move as a single group, with all models within 2″ horizontally and 5″ vertically of at least one other model from their unit. While a unit has six or more models, all models must instead be within 2″ horizontally and 5″ vertically of at least two other models from their unit. This is called unit coherency.

I don’t agree with this argument but I can see the reasoning. I don’t agree because if a player places a model and the unit is no longer “in coherency” I don’t think they have successfully placed the model in coherency with the unit. In summary though, whilst some chaining is possible with Poxwalkers, 9th coherency rules do limit it to roughly where the unit was.

Transports – Open Topped, can the units inside shoot with Assault weapons if it Advanced?

Not a submitted question but I’ve seen this question doing the rounds again, maybe because a certain faction has some rather nice Transports with big firing decks on them. I think the answer is yes and it’s got quite a bit of backing.

7) Any abilities (including Detachment abilities) that models in an embarked unit have, or that their weapons have, continue to apply when they make ranged attacks.

and then the Assault weapons rules say

The abilities the unit or their weapons have still apply when embarked and when making ranged attacks. So whilst yes the transport would definitely count as advanced, and this would apply the “not eligible to shoot” restriction, the transport would be able to circumvent it with assault weapons so the embarked units can as well.