Hi everyone just a short Ruleshammer this week but something else to note is that we’ve made several important updates to other Ruleshammer articles to reflect recent FAQs and changes!

Setting Up Models where they fit – Disembarking and Deepstrike

If I try to disembark (whether from a destroyed transport or not) and there is only space for 9 models out of my 10-model unit, is the unit completely unable to disembark (and so dies if the transport had been destroyed, unless I use the Emergency Disembarkation stratagem)? I was recently made aware that in 9th you can no longer bring a deep-striking squad down into a tight space and just have those that can’t fit be destroyed, but does this “if one part of the unit can’t fit, the entire unit can’t be placed there” policy extend to disembarkations too? I can’t find a rule stating you can still place a unit if you remove individual models that don’t fit. – Pomguo

So there’s a few things to unpack here. First of all I want to quickly state that to disembark you don’t need to be able to deploy all models, any you can’t deploy are destroyed. This is made clear by the last few sentences of the Unit Coherency rules (which are, unhelpfully, on a different page form the rules for disembarking): 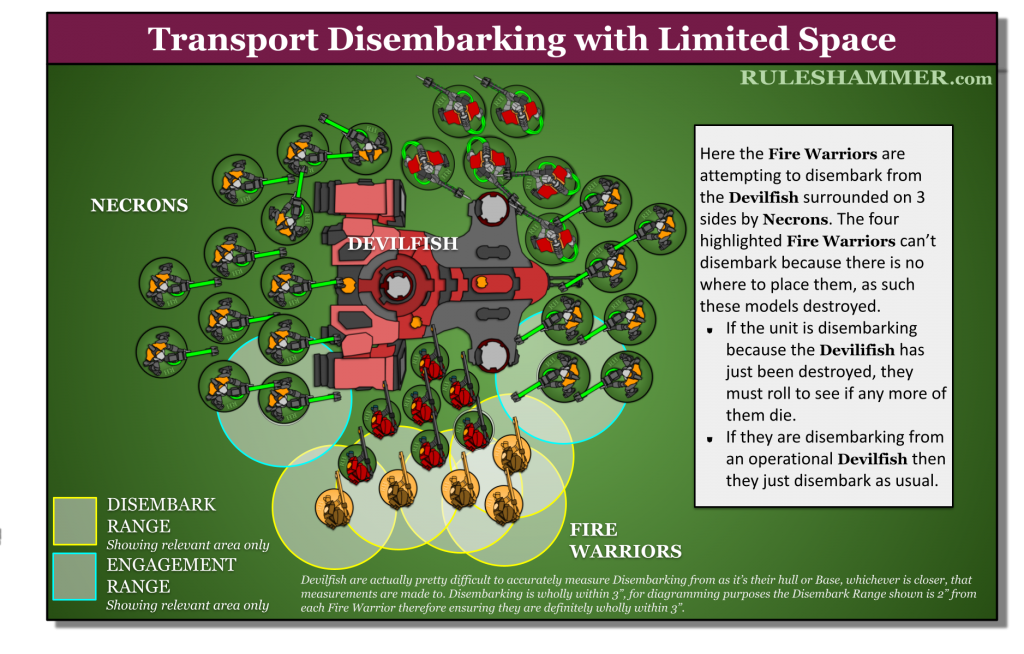 So you are not forced to use the Emergency Disembark Stratagem to get any out – that’s only if you want to try and get more of them out, even if the transport being destroyed is the cause for the disembarking. Depending on how many models you have going from losing models on 1s to losing them on rolls of a 1 or 2 in exchange for saving for a single model is probably not worth it most of the time. 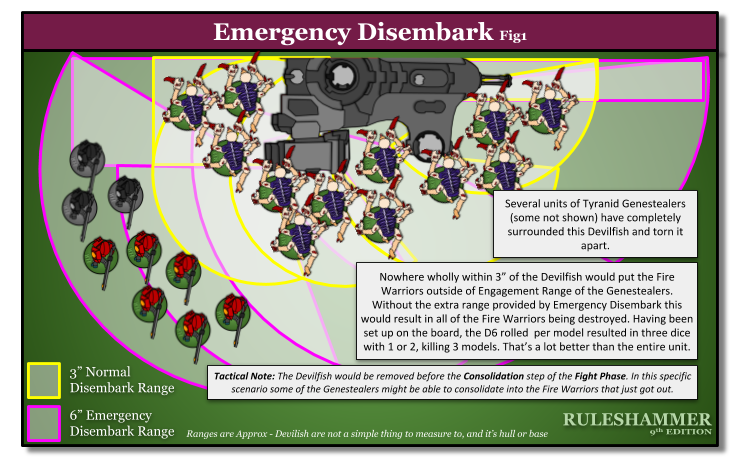 Secondly, there’s a bit of debate about deep striking/teleporting/tunneling/dropping a unit into a tight space that it can’t fit in. However the interpretation of these rules that I think is best supported hinges on the above rules around disembarkation as why models that don’t fit might be destroyed during set-up. Specifically, let’s to back to that quote above from the Unit Coherency section of the main rules, which gives you two cases where models that can’t be set up are destroyed:

So when it comes to bringing in units via Deep Strike I would argue you can take advantage of this rule – and have models from a unit arriving on the table destroyed – so long as it’s forced upon you. If there’s another valid placement for them somewhere else that does have sufficient room to place the whole unit then you have to set them up there instead. 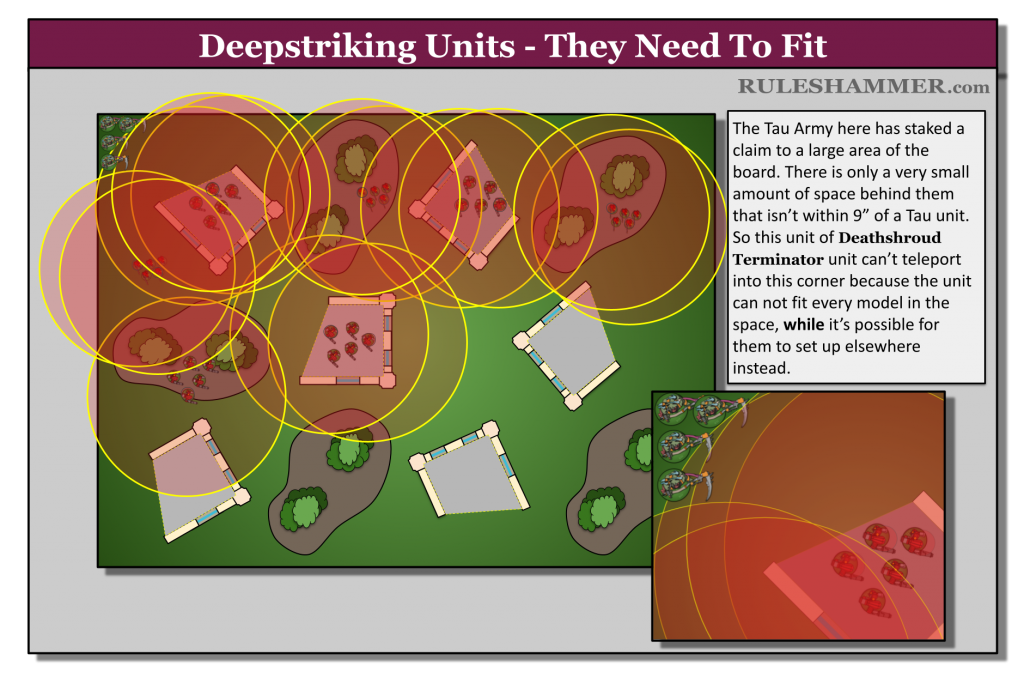 So if you actually find yourself on a board where it’s not possible to fit the whole unit anywhere, then you can deep strike as many models as will fit on the board and have the rest destroyed. In previous editions this was probably rarer than it might end up being in certain games of 9th edition with a smaller table and Infiltrators being pretty common. A Space Marine Drop Pod with it’s doors down is roughly 9” wide (last I checked), creating an odd star shaped area that nothing can Deep Strike within that has a diameter of 27”. That’s an area of 572”² or 43.4% of the board space of the 30”x44” boards suggested for 1,000 points games. Bring two of them and space them 18” apart and that’s 86.7% of the board denied to enemy reinforcements before even accounting for any other units the Space Marines might have.

Can additional hits from an ability trigger other rules, such as Mortals on unmodified 6s?

The FAQ clarified that in the case of attacks that make multiple hit rolls, each hit roll is considered a separate attack. How about attacks that cause multiple hits but do not require additional hit rolls? For instance, if I used An Example Made on a Death Jester so that each successful hit counted as two or three, would those also trigger mortal wounds? – Hershal

No. Additional hits without a Hit roll do not trigger mortal wounds in this case.

Note that this isn’t the case for abilities that require multiple hit rolls – those are considered separate attacks based on this rare rule:

Some rules, typically weapon abilities, tell you to roll more than one hit roll for each attack made , e.g. ‘each time an attack is made with this weapon, make 2 hit rolls instead of 1’. In these cases, each hit roll is treated as a separate attack that is made against the same target. As such, all normal rules that are triggered by attacks, or that apply to attacks (such as re-rolls or modifiers conferred by other rules) apply to each ‘hit roll’. Note that these additional attacks do not themselves result in more hit rolls being made.

And such the extra hit rolls would trigger any rules that a normal hit roll would. There’s another rare rule that explains that if you just get additional hits on a particular roll, then it’s not considered to have been made by a hit roll.

So they don’t trigger any abilities that require a certain roll. Abilities such as An Example Made: