Happy new year! Hope you’ve all had a good break or at least some period of relaxation over the last few weeks! Maybe fit some Warhammer in where you could! Here’s another few Q&A questions to bring in the new year!

Dreadclaw Drop Pods – when can I disembark from them?

Can the chaos space marines dreadclaw disembark its models after arriving or do I have to wait until the next turn?

Currently rules as written, no. For some reason the Dread Claw lacks the “immediately” disembark section of the Drop Pod rules. So you’ll have to wait until the following turn.

Dreadclaw Drop Pod Assault: During deployment, you must set up this unit high in the skies instead of setting it up on the battlefield, but neither it, nor any units embarked within it, are counts towards any limits that the mission you are playing places on the maximum number of Reinforcement units you can have in your army. In the Reinforcements step of your first, second, or third turn Movement Phase, regardless of any mission rules, you can set up this unit anywhere on the battlefield that is more than 9” away from any enemy models. [Imperial Armour Compendium Pg.120]

Compare to this version from Codex Space Marines

Space Marine Drop Pod Assault: This transport must start the battle set up high in the skies [see Death From Above, page 125) but neither it, nor any units embarked within it, are counted towards any limits that the mission you are playing places on the maximum number of Reinforcement units you can have in your army. This transport can be set up in the Reinforcements step of your first, second or third Movement phase, regardless of any mission rules. Any units embarked within this transport must immediately disembark after it has been set up on the battlefield, and they must be set up more than 9″ away from any enemy models. After this transport has been set up on the battlefield, no units can embark within it. [Codex Space Marines Pg.190]

In fact not only is the immediate disembark rule missing but so is the rule about not embarking models in it after it’s been deployed. So I guess this means you can sneak back inside them if you wanted to? I did check the Imperial Armour FAQs and it wasn’t fixed there either. What surprises me most about this though is that almost every single datasheet in that book when referring to an ability that already exists, tells you to look there. Codex Chaos Space Marines doesn’t have a Drop Pod datasheet to refer to so I can sort of see why they didn’t do this but also have no idea how that led to getting a very different version of the rule to the standard drop pod.

It can move though, so it’s far closer to a functional transport than the standard Space Marine drop pod in that regard. If you’re going first it’s a very mobile transport with a limit on disembarking in Turn 1; if going second it’s a transport that can’t be shot at in Turn 1. I really think it could go either way on if it gets the on deployment disembark rule, and I’m not sure if you’d want that disembarkation to be forced or not.

Robert “TheChirurgeon” Jones’ Note: You absolutely would rather have the disembark. Chaos Space Marines have no other way to deep strike models turn one and being able to drop Obliterators or Noise Marines in a Dreadclaw would be very, very good.

Can it even Disembark at all though?

The Dreadclaw is sold with a Flying stand.

And the Dreadclaw uses its own variant of the Hover rule, which has you measure distances to its Hull, not its base. This would mean that if you are required to use the flying stand it would pretty much only ever be able to disembark whilst really close to a Ruin with an upper floor. I do not however recommend enforcing this as it’s obviously very silly. Instead I would recommend they be deployed on their legs, and I guess when they move it’s either a skittering they do or maybe they leap around like jumping insects?

Rob: As a Dreadclaw haver I do not recommend using the flying stand. It’s not a particularly safe way to put them on the table.

I’m not sure if you’re looking at some really old wording for a Psyker here but the latest Space Marine codex wording is this.

This wording clearly says “attempt to manifest two psychic powers” with this psyker, so no it’s just two attempts at two powers. Not several attempts until you have managed to cast two powers.

The powers also have to be unique.

What absolutely isn’t clear at the minute (so if you’re reading this expecting an answer then sorry), is if denying a Psychic Action uses up a Psychic Power denial. It’s very clear that doing a Psychic action means that that psyker can’t use any powers.

A PSYKER unit from your army can attempt to perform a psychic action in its Psychic phase instead of attempting to manifest any psychic powers. [Chapter Approved: Grand Tournament 2020, Pg 77]

The section on denying them with Psykers is less clear though.

The opposing player can then select one of their PSYKER units that is within 24″ of the PSYKER unit attempting to perform the psychic action and attempt to deny that action in the same manner as if it were attempting to deny a psychic power, by passing a Deny the Witch test. [GT2020 pg.77]

So it’s really left unclear on if denying a Psychic Action counts as using up a Psychic Power denial or not, or if this section is just saying that all Psykers can deny actions and this is how they can do so. You are limited to only one attempt to deny per action anyway by the text of the rule. Really hoping for an FAQ on this but I’m not sure how frequently the Psychic Action secondaries are being taken because of how punishing Abhor the Witch is.

How do you measure to objectives?

I’ve covered this in the past but it’s been a while since it was talked about. Especially in the context of terrain. Most missions prevent objectives from being within terrain pieces (though Chapter Approved: Tactical Deployment does allow this for area terrain features and hills), but that doesn’t mean you can’t have situations what models are within range of the objective whilst also within a piece of terrain. Being within an objective has this definition.

This creates a cylindrical area around the objective. 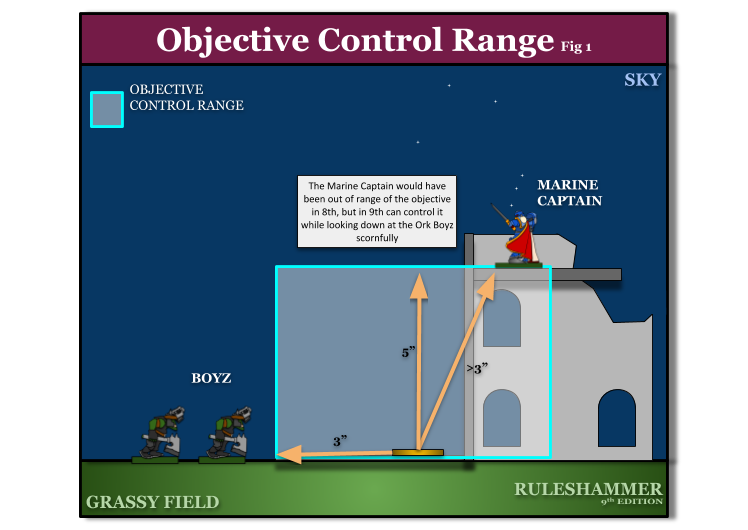 This area is not 6” wide though, it’s 6” plus the width of the objective which is recommended to be 40mm in the rule book.

This recently came up during a game and I thought it worth going over again. Some abilities ignore specific types of cover, and some ignore all 3 types: Light, Heavy, and Dense. How to determine between what cover is ignored is covered by the Ignoring Cover Rare rule, though as time goes on more abilities will use the actual cover type terms rather than rely on this approach.

If a rule says that the target ‘does not receive the benefit of cover to its saving throw’, then, when resolving an attack with that rule, the models in the target unit ignore all benefits received from terrain traits that improve its saving throw (e.g. Light Cover, Heavy Cover).

So for instance the Tau Smart Missile System weapon would only ignore Light and Heavy cover (if you could use them as a Melee weapon that is).

This weapon can be fired at units that are not visible to the bearer. Units attacked by this weapon do not gain any benefit to their saving throws for being in cover.
Importantly as well; ignoring line of sight requirements does not mean a weapon can ignore dense cover.

If a rule says that the target unit ‘does not receive the benefit of cover’, without specifying what benefits are ignored, then, when resolving an attack with that rule, models in the target unit ignore all benefits received from all terrain traits, including those that improve its saving throws, impose penalties on hit rolls and so on (e.g. Light Cover, Heavy Cover).

Again the Tau codex has one of these to look at, you might well say I’m biased but I also want to make it clear that some codexes can have both types of ability, even the older ones.

Multi Spectrum Sensor Suite: Use this Stratagem before a Battlesuit unit from your army shoots. Enemy units cannot claim the benefit of cover against shots made by this unit.