Welcome to another Ruleshammer Q&A, this week covering some quirks of movement, re-rolls that sometimes require slow rolling and a quick fire round of smaller questions!

Can a Ravenwing unit stay where it is on the table and declare to have moved/advanced for the purposes of:
a) Jink invulnerable saves
b) Death on the Wind secondary
And if they can, should they?! Thanks!

Hmmmm… I think the answer to A is Yes.

ADVANCE
When a unit makes an Advance, make an Advance roll for the unit by rolling one D6. Add the result in inches to the Move (M) characteristic of each model in that unit until the end of the current phase. Each model in that unit can then move a distance in inches equal to or less than this total, but no model can be moved within Engagement Range of enemy models. A unit cannot shoot or declare a charge in the same turn that it made an Advance.

Advancing doesn’t require any minimum amount of movement to occur, The unit still counts as having moved and advanced for any rules that care about that though. Your second point though is part of a much larger debate that I don’t know has an actual 100% answer.

Can the player decide a model’s path, or is the path of a model the minimum legal path between start and end location? The rules do have the following:

Whenever you move a model, you can pivot it and/or change its position on the battlefield along any path

That’s obviously there to let you navigate around terrain or enemy models, but it being here does mean you aren’t forced to take the most efficient possible route. As a consequence, you could theoretically choose to go the long way round, or double back on yourself, and herein lies the issue.

The secondary requires a model that moved 12” or more in your movement phase that turn to kill an enemy unit.

Score 2 Victory Points each time an enemy unit is destroyed by an attack made by a RAVENWING model from your army that moved 12” or more during the Movement Phase of that turn, or made a charge move that turn.

Editor’s Note: This was a non-trivial issue that caused as big a debate as there has ever been in the Goonhammer offices. Some argued that a unit can move however it likes during its move, and the rules do not prevent a move forward-backward from occurring; others argued that the distance a model has moved is measured by its final position and that the notion of Ravenwing bikers vibrating in place to “move” 12″ was clearly stupid as hell and against the rules’ intent. Voices were raised, insults were flung, chairs were thrown, feelings were hurt. It wasn’t pretty. In the end we semi-settled on the idea that this was technically correct, but still dumb as hell and the people arguing in favor of it are also dumb as hell. Go to hell, Wings.

It looks like you can technically do this by looping back on yourself – but that seems weirdly out of line with that the rule appears to want you to do. Now that there’s no heavy penalty, there’s essentially no downside for a Land Speeder or Biker declaring that they’re “moving 12″‘ but returning to the same point, so you don’t really have to work to qualify for this. In line with how minimum moves work, this should probably say “if that model made a move that ended with all parts more than 12″ from where it started”, and we wouldn’t fault a TO for ruling that this is how it works (or if a future FAQ did so), but strictly on the basis of the rules you seem to be able to vibrate very hard in place (as long as you have 12″ of movement) then score your points. This one is definitely worth having a pre-game discussion with your opponent about as well, as claiming a bonus for moving while staying perfectly still feels extremely gamey, and plausibly not what the rule intends.

Core Rules: Re-rolls, do I need to slow roll when I might use one?

When using an ability that allows you to reroll a single die per turn, such as the Pinpoint Cruelty dread household, do you need to slow roll all of the dice if you want to be able to reroll one of them, or can you just roll all the dice at once and then pick one of them to reroll after you’ve seen all of them?

This has some layers, first the ability you mentioned;

When a model with this bond fires Overwatch or is chosen to shoot or fight with, you can re-roll a single dice when determining damage as a result of those attacks.

So this is an odd one because whilst this ability is worded in such a way that it arguably allows for a re-roll after you have seen all the dice, the characteristic it allows a re-roll of can’t be fast rolled. To fast roll attacks all the weapons require the same damage characteristic, which a set weapons with random damage don’t have. I covered the Fast Rolling rules in more detail last week but here’s the relevant section.

Fast Rolling Dice
The rules for making attacks (pg220) have been written assuming you will resolve them one at a time. However, it is possible to speed up your battlers by rolling the dice for similar attacks together. In order to make several attacks at once, all of the attacks must have the same Ballistic Skill (if a shooting attack) or the same Weapon Skill (if a close combat attack). They must also have the same Strength and Armour Penetration characteristics, they must inflict the same damage, they must be affected by the same abilities, and they must be directed at the same unit. If this is the case, make all of the hit rolls at the same time, then all the wound rolls. Your opponent can then allocate the attack one at a time, making saving throws and suffering damage each time as appropriate. Remember, if the target unit has a model that has already lost any wounds or already had an attack allocated to it this phase, they must allocate further attacks to that model until either is is destroyed, or all the attacks have been saved or resolved. [BRB Only (for some fucking reason) Page 221]

There are abilities and stratagems that technically require slow rolling to be used as they are worded, in fact most do.

Command Re-Roll
Use this Stratagem after you have made a hit roll, a wound roll, a damage roll, a saving throw, an Advance roll, a charge roll, a Psychic test, a Deny the Witch test or you have rolled the dice to determine the number of attacks made by a weapon. Re-roll that roll, test or saving throw.

Even the Command Re-roll Stratagem technically requires you to slow roll the dice because it can actually only be used to re-roll the last dice roll you just made. In practice this would slow the game down a lot so most people are fine with allowing its use with fast rolls. Just remember that if you might use the strat and your opponent asks you to slow roll, you really should, especially if you might use it to re-roll a saving throw (which aren’t technically allowed to be fast rolled).

The Lighting Round – Quick Answers to Common Questions!

As defence line only extends ‘fight’ range and not engagement range, can a unit move to within 2″ of a unit behind a defence line terrain feature to fight a unit across from it?

Yes this is allowed, I think. The defence line rules specifically changes eligibility to fight, however there is one potentially unclear part.

It’s not clear from the rule is the “their target” is the target of the melee attacks or if it was the “their target” from the charge phase. I think it’s the former, and allows fighting over these terrain features to happen without a charge. It would be nice to have FAQ that says for sure that this is correct though. There are a few odd interactions that can occur around these terrain pieces, especially if there’s not room or a route to actually pile in. 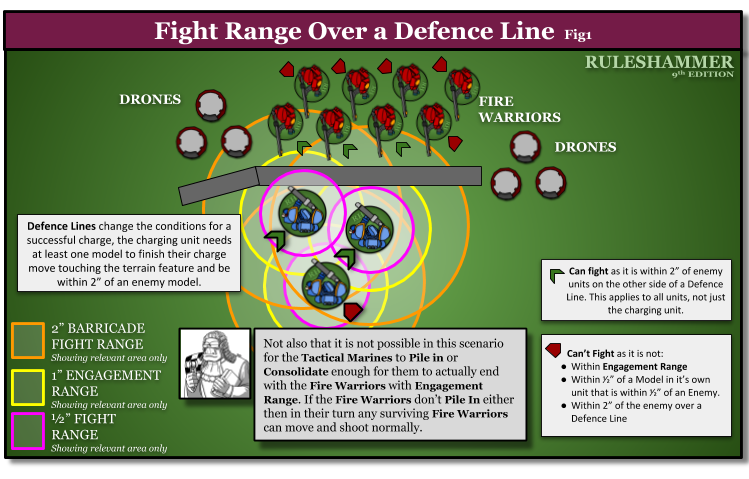 I’ve covered this in detail and more in my Terrain Rules Guide.

Can I shoot and charge in same turn?

Yes! This wasn’t allowed in earlier editions if I remember correctly but certainly is allowed in 9th edition. Not that the current edition doesn’t have plenty of rules that prevent charged, such as already being within Engagement Range, having Advanced, having Fallen Back, and I’m sure many others. There are also obviously units that have exceptions to some of those charge restricting rules, Genestealers for instance can Advance and still Charge.

Playing stratagems on units that are not on the Board

Can you use a stratagem on a unit that’s is part of your army, but not currently the battlefield or set up somewhere else? You can’t on embarked units, but nothing in the current rules seems to prevent it otherwise (the FAQ was 8th edition).

Generally there’s some uncertainty here, as it doesn’t “feel” like you should. I don’t have a perfect answer to this but if a Stratagem doesn’t specify that the target needs to be on the battlefield then my current opinion on this is that they can be used. I’d really like GW to make this clearer. Obviously the vast majority of stratagems will have no benefit for a unit not on the board but there are some that might.

Can a Hammerfall Bunker (or any other unit without a move) be put into Strategic Reserves – I couldn’t see anything which would prevent this specifically based on having the building tag or a move of “-“. For most types of these units I could see it as a ‘Don’t be stupid’ but the fluff for the Hammerfall implies that it is meant to be dropped down and Strategic Reserves would be a way of implementing this given that GW forgot to give it Death From Above.

I think I got this question before the FAQ that prevented this was added, but now we have an answer to this question:

As a Fortification the Hammerfall Bunker is prevented from being placed into Strategic Reserves.